SONA 2018 Debate: Ramaphosa’s new dawn gets a break amid opposition calls for a clean-up 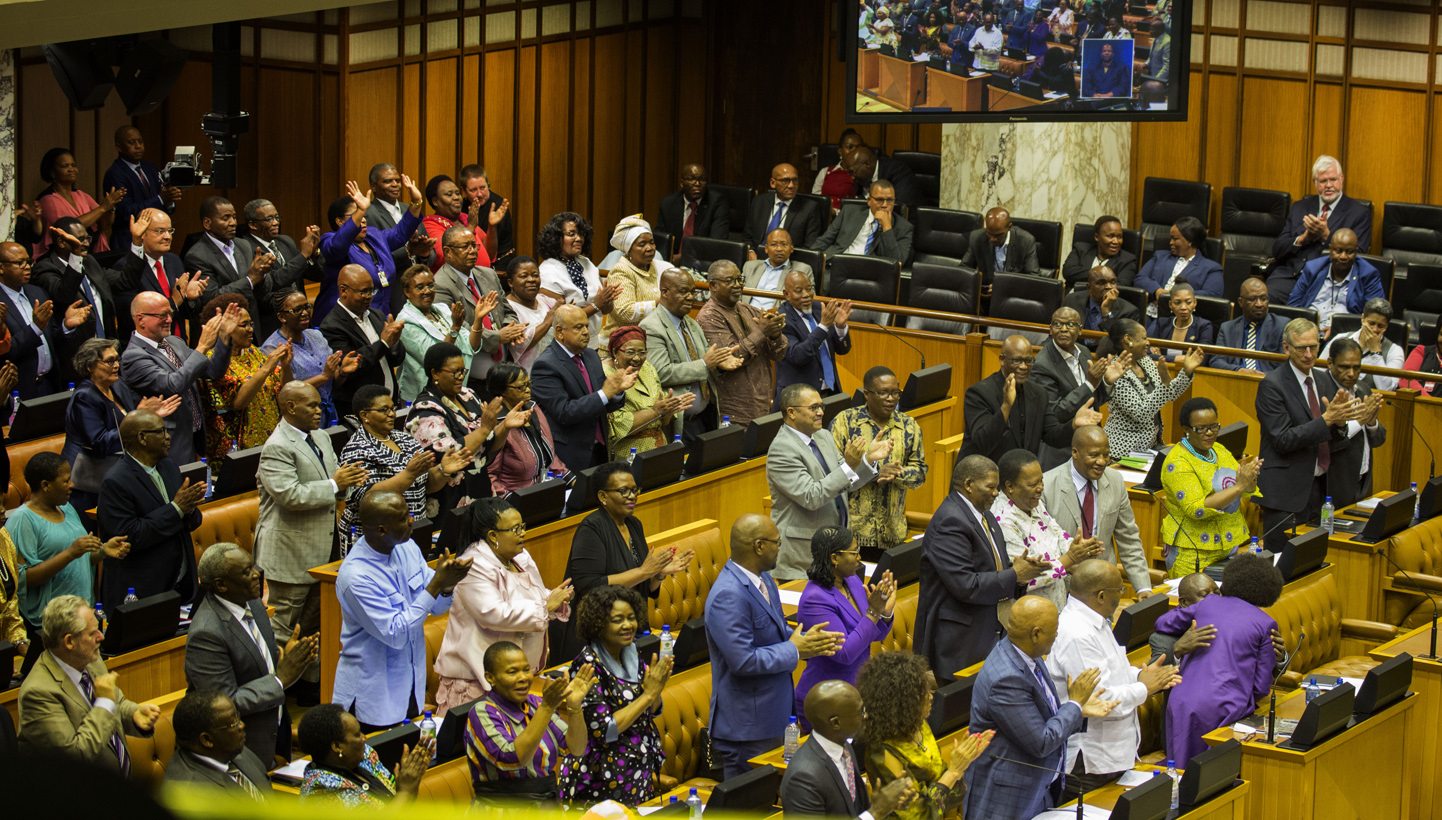 President Cyril Ramaphosa’s to-do list just got longer. Monday’s parliamentary debate on the State of the Nation Address delivered demands from opposition parties and his own ANC – more money for municipalities, reining in the State Security Agency (SSA), a Cabinet reshuffle to shed State Capture-linked ministers and, depending on the opposition seat, either the speedy implementation or ditching of land expropriation without compensation. But for the first time in years the parliamentary debate focus was on national – not personality – issues. By MARIANNE MERTEN.

Old habits die hard. And so the ANC battle-axes on points of order, MPs Chana Pilane-Majake and Bhekizizwe Radebe, were on their feet to stop DA MP Phumzile van Damme talking of “amasela (thieves), some of whom sit on the ANC benches” and arguing those linked to the Vrede farm-Gupta linked project “like Honourable (Mineral Resources Minister Mosebenzi) Zwane and (ANC Secretary-General) Ace Magashule must be charged and prosecuted…”

Later she added: “Sometimes it does get uncomfortable. But let us not stifle debate. If members on the podium get out of order… I shall rule accordingly.”

And that was it, although EFF Chief Whip Floyd Shivambu got a last word in: “The ANC must not do what they used to do, what they did to protect Jacob Zuma with frivolous points of order.”

It was land expropriation without compensation that riled parliamentarians, and highlighted cracks in what has been a rather united opposition party front on display over no confidence motions in Zuma and, more recently, reducing the size of Cabinet and ditching those ministers and deputy ministers linked to corruption and State Capture.

Adopted at the ANC December national conference with caveats that such expropriation without compensation should not undermine agricultural production or food security, it made it into President Cyril Ramaphosa’s maiden State of the Nation Address (SONA) on Friday.

EFF leader Julius Malema not only shed five minutes from his allocated 14 minutes’ speaking time, but also used some of his podium time to directly address DA leader Mmusi Maimane, after the latter had earlier dissed land expropriation without compensation as unnecessary if the current provisions were properly implemented.

“Your stay in the metros will depend on your attitude to expropriation without compensation,” Malema told Maimane with regard to their parties’ coalitions following the ANC’s dwindled election performance in the 2016 municipal poll that saw it lose control of Johannesburg, Tshwane and Nelson Mandela Bay.

Then he switched to Ramaphosa, described earlier as the man without a plan who’d be gone in 12 months. “Mr President, expropriation without compensation did not capture the headlines because they know you are not serious… There are no conditions attached to expropriation without compensation because, when they took our land, they never attached any conditions. They just killed our people.”

No one paid much attention to either the Freedom Front Plus or the African Christian Democratic Party cautioning that land expropriation without compensation was a negative signal. But Cope leader Mosiuoa Lekota was ribbed Parliament-style when he asked, “Who is our people and who is not your people, sir” and “Whose land would be given to whom”.

Both the ANC and opposition benches erupted in heckling. IFP leader Mangosuthu Buthelezi finally stood up on a point of order: “I can’t hear anything,” he said, sternly looking at the EFF MPs’ seats nearby. There was a chuckle as everyone settled down and the debate continued without much ado.

The tone of Monday’s SONA debate was perceptibly different from debates in the Zuma presidency when the ANC parliamentary caucus supported him in a series of scandals. This led to the Constitutional Court in March 2016 ruling that the National Assembly acted “inconsistent with the Constitution” in the Nkandla debacle by absolving Zuma from any repayments as ordered by the public protector, and again in December 2017 for having failed to hold Zuma accountable with regards to his breach of the oath of office in the Nkandla saga.

The political sands have shifted since Ramaphosa’s election as ANC president at the governing party’s December national conference, and his swearing in as South Africa’s president last week. The ANC parliamentary caucus last week was ready to amend, and support, an EFF no confidence motion amid the turmoil of ANC internal machinations to get Zuma to depart from the Union Buildings.

On Monday there were plenty of references to “fellow South Africans” for the first time in a long time from the ANC parliamentary benches that have been more used to hammering home the governing party’s numerical dominance and self-proclaimed status as “leader of society”.

And so ANC Chief Whip Jackson Mthembu could stand at the podium without being heckled, arguing for Parliament’s independence as a sphere of state, not a government department, as “sacrosanct”, highlighting its constitutional oversight mandate.

“As Parliament we must not, and cannot, ever be found on the side of having done or allowed wrongdoing under our watch,” he said, adding to his earlier call for ethical leadership transcending party-political lines.

Right now, the Ramaphosa presidency is getting a break as opposition parties are looking for the next bugbear. The DA cited basic education failures, with the opposition calling for a Cabinet clean-up of compromised ministers and deputies. While Maimane argued that a reduction to 15 ministers could save R4.7-billion, Shivambu pointed east to China and Singapore for examples of how State-owned Enterprises earned their citizens billions.

“We only give you a chance because you’ve not been personally found guilty of being a constitutional delinquent,” said Malema in reference to former President Jacob Zuma.

Malema, with a tribute to the judiciary, civil society, media and fellow opposition parties for “defeating the monster created by the ANC” – only United Democratic Movement leader Bantu Holomisa did likewise – captured the widespread relief of the end of the scandal-ridden Zuma presidency. And Malema did so in a more politically sussed way than Maimane, whose statement – “We have removed a corrupt and broken president from office. Our task now is to fix the broken country he left behind” – got Human Settlements Minister Lindiwe Sisulu hot under the collar.

“I find it is absolutely dishonourable for Honourable Maimane to take credit for a change of government, for what was a structural adjustment in the ANC driven by the ANC that has nothing to do with the opposition,” she said, going off-script from her debate contribution.

To loud heckles, Sisulu continued: “South Africa is not a broken state. You no doubt overlook the quagmire of the City of Cape Town while you talk of a broken state.”

The minister wasn’t around when DA Chief Whip John Steenhuisen took a dig, pointing out that one of the ANC’s own had remarked that her comment on SABC presenter Peter Ndoro’s sacking was “fake news”. Ndoro has taken time off to rest, the SABC re-confirmed its statement of last week.

“You’ve been dealt a very tough hand. The ace in your pack is actually a joker,” concluded Steenhuisen in reference to Magashule.

Shortly after his election as president in the National Assembly on Thursday, Ramaphosa said it would be welcome “if the level of debate in this House can be raised without screaming at each other, and points of order”. And he seemed to have got his wish on Monday as the usual acid remarks turned pointed, but light, even amid speculation about a Cabinet reshuffle.

“President, are you paying attention? We are choosing ministers now,” Malema said in his point of order after Rural Development Deputy Minister Mcebisi Skwatsha’s pledge that land expropriation without compensation would proceed amid a national conversation. Ramaphosa chuckled.

DA MP Natasha Mazzone attempted song, but it was her closing that put a grin on many a parliamentarian’s face. “I leave the president with one piece of advice. Please, I ask on behalf of 54-million South Africans, leave this House… walk straight into (Public Enterprises) Minister Lynne Brown’s office and say the following eight words to her: ‘Minister Brown, you are the weakest link. Goodbye’.”

Monday’s SONA parliamentary debate continued the tone and optics of Ramaphosa’s new dawn and renewal. But everyone knows the proof is in the pudding. DM