Parliament: Zuma calls on ANC to unite with EFF to change the Constitution on land issues 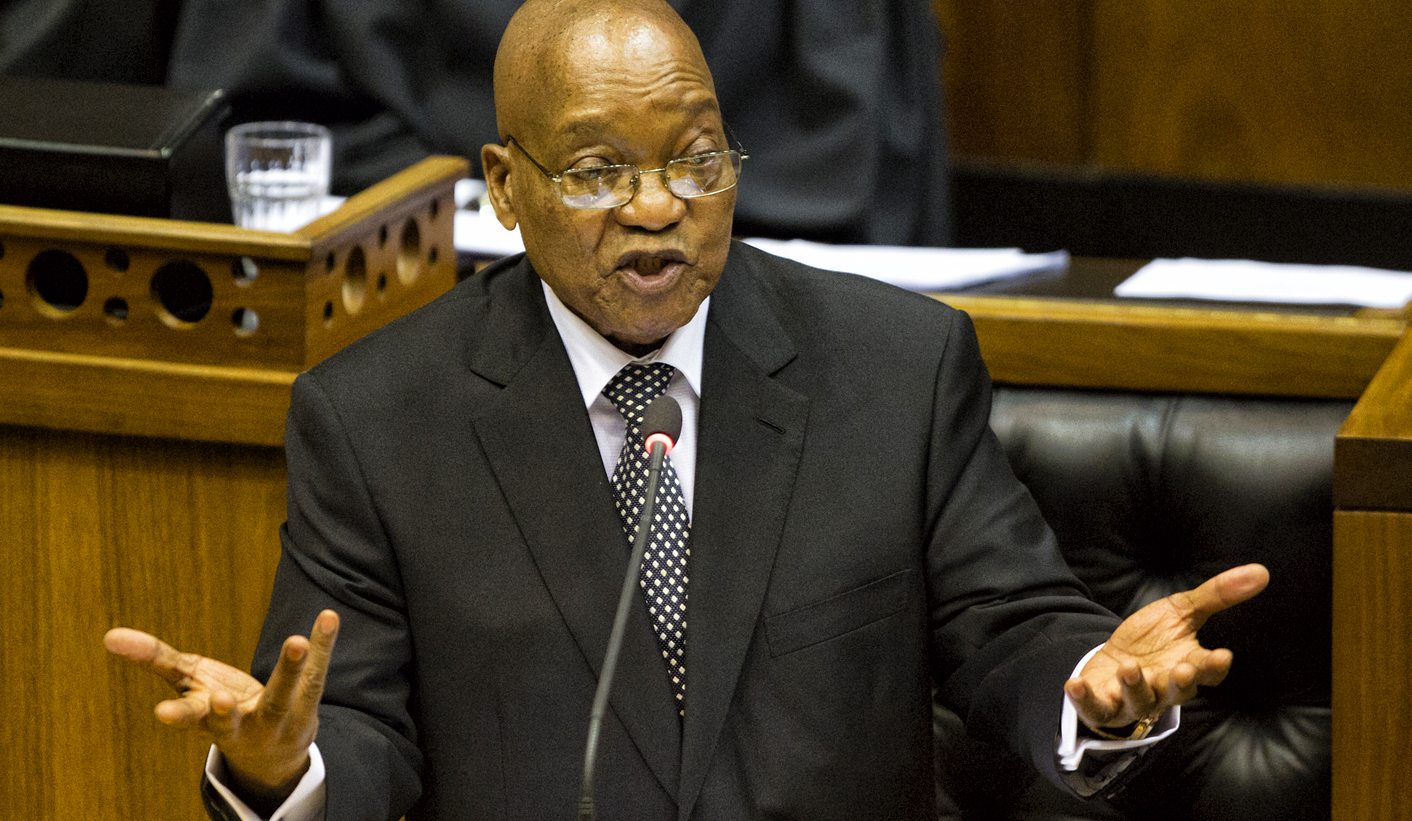 President Jacob Zuma castigated his ANC parliamentary caucus for voting down the EFF’s offer to join the governing party in support of a constitutional amendment to allow expropriation without compensation, and land reform. Making a call to unity and action on returning land to black South Africans at Friday’s annual address to the National House of Traditional Leaders in Parliament, Zuma said “black parties” should unite to address real issues, instead of wasting time. Three days earlier, EFF leader Julius Malema made the same call in the National Assembly. But in the hard-line attitudes of parliamentary politics the governing party was not going to accept anyone else’s suggestions. By MARIANNE MERTEN.

Land, in particularly the return of the land to black South Africans dispossessed under apartheid and colonialism and traditional leaders is a mix that President Jacob Zuma appears much more comfortable with than the noisy, heckling MPs of the National Assembly.

It is a regular feature in Zuma’s address to the traditional leaders: in 2014 and 2016 he announced changes to the land restitution regime that would re-open the claims window, and called on traditional leaders to join forces to make claims on behalf of their communities.

In 2017, with the State of the Nation Address having set radical socio-economic transformation as the year’s leitmotief  – land and land hunger being central to this – Zuma went off his prepared script to re-iterate his calls made elsewhere for expropriation without compensation to be made possible in order to speed up land reform.

“We need to accept the reality that those who are in Parliament, where laws are made, particularly the black parties, should unite because we need a two-thirds majority to effect changes in the Constitution,” said Zuma.

“We can’t fight over nothing and not deal with the real issues… and waste time, instead of creating the legal institutions to address the problems we have of inequality, poverty and unemployment.”

In doing so, Zuma publicly reprimanded his ANC parliamentary caucus which had argued during Tuesday’s debate that while land reform was slow, the ANC rejected expropriation without compensation as the Constitution needed to be followed, not the EFF’s political agenda.

Or as the ANC’s rural development and land reform committee chairperson Phumuzile Ngwenya-Mabila put it:

“We are not going to be told what to do. We are not in alliance with anyone else. We are a ruling government… Expropriation of land should be done for public purpose and public interests, not for the EFF purpose and EFF interests. Secondly, expropriation without compensation is unconstitutional. We need to respect and uphold the Constitution as citizens of this country and, moreover, as members of this House.”

That the EFF would give its 6% representation in Parliament to the ANC to amend Section 25 of the Constitution, or the property clause, is a long-standing offer to support land restitution and redistribution. The ANC needs this additional support as its numbers in the House fall short of the required two-thirds threshold for constitutional amendments. Tuesday’s debate called for by the EFF was in support of this – and to drive the point home.

“This is a motion that seeks to unite black people in South Africa and ordinarily – if leadership was provided – we shouldn’t be having this debate because the land should have been returned into the hands of the rightful owners,” said Malema in opening that debate.

“This is a matter that can unite black people. This is a matter that all of us should stand together and isolate white monopoly capital,” added Malema later. “We have made it available to the ANC to implement exactly what the president said he wants to do and the ANC rejected it.”

Of course there are nuances. While Zuma on Friday squarely put the blame of land dispossession, and the subsequent hardships of black South Africans, at the foot of “colonisers”, Malema was more blunt in blaming “Dutch gangsters”.

And as Malema indicated land might just be taken, Zuma called for an “orderly process”, taking a dig at the EFF without naming it. “We do not support chaos and illegal land grabs, (our) actions must be informed by the Constitution and the laws of the land. It is important to understand so you are not misled.”

Zuma’s comments on Friday echoing his previous statements, the distinctly different stance by ANC MPs and Malema’s comments are part of the bizarre political twists over land restitution and redistribution that goes right to the heart of policy-making, implementation and governance.

Key land reform related legislation has been snarled up for years. The Expropriation Bill, which upholds the constitutional requirement of “fair and equitable compensation” was passed by Parliament, but referred back to the national legislature over presidential concerns over inadequate public consultation. The Restitution of Land Amendment Act, passed in 2014, is back in Parliament after it was ruled invalid over public consultation and because the outstanding claims dating back to the original December 1998 claims must be resolved before new ones are considered. The Extension of Security of Tenure Amendment Bill, first mooted in 2015, has started its parliamentary route only now. And a draft bill to regulate the size of land holdings is only now being released for public comment, years after the policy was made after a robust public comment period.

And government’s land audit has been pending finalisation for years, at least in part, due to a lack of racial classification of owners in the deeds office. According to City Press, Rural Development Minister Gugile Nkwinti said there was a preliminary report that, once approved by Cabinet, would become policy.

Yet Zuma told traditional leaders government would launch an audit of pre-colonial land ownership, use and occupation patterns.

Lifting almost cut-and-paste from Nkwinti’s speech during last month’s debate on the State of the Nation Address, Zuma said on Friday:

“Once the audit has been completed, a single law should be developed to address the issue of land restitution without compensation. The necessary constitutional amendments should be undertaken to effect this process.”

Also, like Nkwinti, Zuma indicated the land claims commission should be re-designed and established as a constitutionally-enshrined body to support democracy like the Public Protector, Auditor-General, Commission for Gender Equality and South African Human Rights Commission.

This, Zuma said, would require another constitutional amendment. While he earlier had told traditional leaders there were too many laws on land restitution and redistribution – “You can claim land today by the time your people get it you’ll be dead” – no time-frame for either the audit or single land law was given.

Until then the current regimen would continue. But that’s not to say there was no urgency to address the issue of land – and radical socio-economic transformation. The time for talking and analysing was over, according to Zuma.

“Historically disadvantaged people must unite on these matters so we have sufficient majority in Parliament to take these decisions… (We) must use our majority to correct the wrongs of this country within the law and within the Constitution,” said Zuma. “The time has come that all of us should unite, speak in one voice… No-one will help us but ourselves.” DM

Photo: South African President Jacob Zuma replies to the debate about his State Of The Nation Address (SONA) in the parliament in Cape Town, South Africa, 16 February 2017. SONA. EPA/NIC BOTHMA