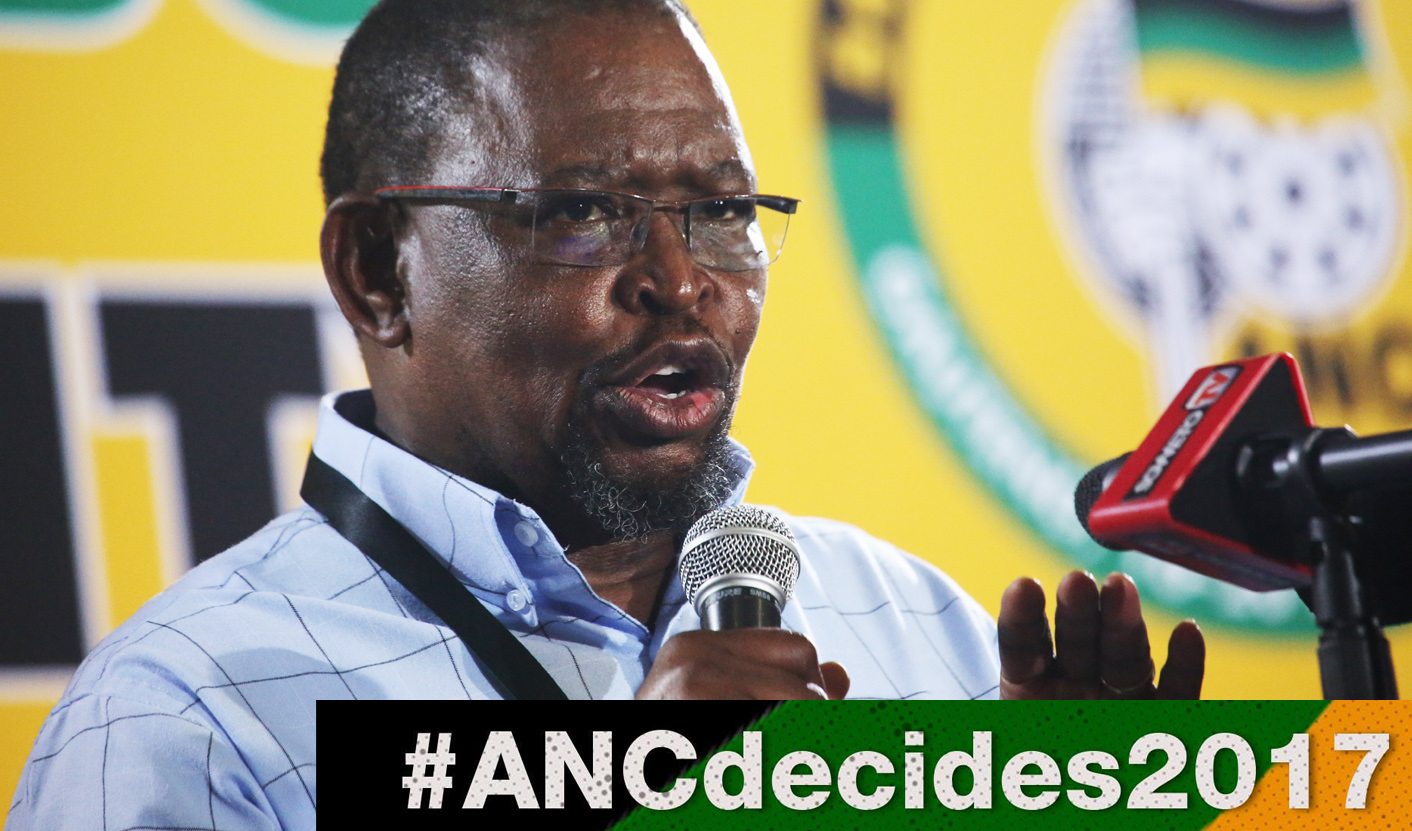 The ANC national policy conference decision dropped a bombshell just as reportbacks from the other 10 commissions largely endorsed the July policy conference resolutions with a tweak here, and a deadline there. Land redistribution without compensation on Wednesday evening was the last stand in the ANC factional proxy battles. It’s now a thing. By MARIANNE MERTEN.

The ANC national conference decided its National Executive Committee (NEC) would start the process towards a constitutional amendment of Section 25, or the Constitution’s property clause, to make possible land redistribution without compensation. There is a carefully phrased and potentially crucial rider: a sustainability test to ensure such redistribution does not negatively impact on the agriculture, food security or other sectors such as financial services, which hold around 70% of commercial farmers’ debt.

ANC President Cyril Ramaphosa in his closing address said land had “preoccupied our people greatly since 1994”, acknowledging the “overwhelming agreement” that land redistribution without compensation “should be amongst the mechanisms available to government” to give effect to land reform.

“We must ensure we do not undermine the economy, agricultural production and food security. That is what is important,” said Ramaphosa, adding later: “The ANC has always taken care to seek to manage the economy of our country in a way that seeks to advance our people… Even as it is implemented we will mange the implementation of this with due care.”

Earlier, Enoch Godongwana, the outgoing ANC economic transformation sub-committee chairperson, emphasised that for land redistribution to happen, “it has to be sustainable”. First a two-day behind-closed-doors workshop with experts like lawyers, NGOs, land activists and others, then further discussions at the ANC lekgotla at the end of January 2018. “The NEC has been given sufficient scope to do the necessary work to help them make an informed decision…”

Godongwana presented the land redistribution without compensation resolution deadpan, emphasising the sustainability test and agreement by conference there would be no illegal occupation of land.

It had fallen to the outgoing economic transformation honcho to deliver what not only was an outcome of ANC factional battles by policy proxies, but also the bizarre shift of ANC policy towards that of the EFF.

As recently as late February 2017, the EFF offered the support of its 25 MPs to the ANC to meet the two-thirds threshold needed in the National Assembly to pass the constitutional amendment to Section 25. Then ANC MPs voted against it on the argument that the issue had not been properly processed – a move which incurred the governing party’s parliamentary caucus public criticism from President Jacob when he addressed the National House of Traditional Leaders a few days later.

“We need to accept the reality that those who are in Parliament, where laws are made, particularly the black parties, should unite because we need two-thirds majority to effect changes in the constitution,” Zuma told traditional leaders then.

On Wednesday Godongwana acknowledged the land redistribution without compensation resolution was the “most contentious” decision, and discussions that led to it were “very strong to the extent of getting rowdy… and it nearly collapsed the conference”.

Newly elected ANC national chairperson Gwede Mantashe had to step in briefly to chair the session. Daily Maverick understands the push, both verbal and physical, for land redistribution without compensation came from KwaZulu-Natal, with the help of some bulky delegates from other provinces. The heated, and at one stage physical, contestation in plenary after commission was behind the delays in wrapping the economic transformation discussions.

The resolution is a win for the slate of Nkosazana Dlamini Zuma, whose campaign endorsed radical economic transformation, even if the ANC MP and former African Union Commission chairperson lost out in the leadership stakes by a tight margin of 179 votes.

But it is not a clear win – unless the ANC suddenly finds the political will to implement that it has not discovered on other policy resolutions taken over the past decade.

For example, among the 2017 resolutions on economic transformation, one on strengthening the Competition Commission’s capacity to probe cartels echoes one taken at the 2007 Polokwane ANC national conference on “anti-monopoly and anti-concentration policy aimed at creating competitive markets, broadening ownership and participation by our people…”.

There are others that have been left gathering dust, including on land reform and redistribution.

The 2007 ANC resolution to “immediately review the principle of willing-seller, willing-buyer so as to accelerate equitable distribution of land” was never really implemented. It was re-endorsed at the 2012 Mangaung ANC national conference, which also resolved on “expropriation without compensation on land acquired through unlawful means or used for illegal purposes having due regard to Section 25 of the Constitution”.

After the first expropriation draft Bill was withdrawn in 2008 over concerns it would not pass constitutional muster over its lack of recourse to the courts, seven years later, in March 2015, a revised version finally came to Parliament, and was adopted in May 2016. It sat in President Jacob Zuma’s in-tray for eight months, before he sent it back to Parliament over concerns over the public consultation process.

The issue of land, black land ownership and the slow pace of land reform is an emotional one. Much of the anger and discontent has turned to finger the Constitution as the culprit which prevented people from returning to the land. It is that that has sustained the populist radical rhetoric around land in the ANC factional battles.

It’s a potentially frought situation as traditional leaders and communities have found themselves at odds as at Xolobeni, Eastern Cape, where the local leaders favoured mining but residents didn’t. It’s not that the ANC is unaware of this. And so the resolution, like the one on land redistribution without compensation, comes with qualifiers.

“It will be done legally. There will be conditions,” Bapela said. Those conditions included not abusing the land and to govern in the interests of the community – or face the possibility that the state would retake the land.

Policy discussions in commissions were kept on a tight timetable to Day 4, and plenary approval to the last day. Exhaustion was palpable. The conference started late and never really moved beyond the leadership elections, and the caucuses and meetings linked to that.

The level of discussions was, well, not really robust. But then the official reasoning was that most matters had been settled at the July policy conference. Or as ANC peace and security NEC subcommittee chairperson David Mahlobo, also energy minister, said “There are no major changes”. Nathi Mthethwa, the arts and culture minister who chairs the NEC strategy and tactics subcommittee, said: “There’s nothing much that’s coming out…”

There were some changes. Local content on the SABC must reach 70% in the next five years. ANC members must know the appropriate behaviour with regards to the national anthem.

The issue around monopoly capital was settled in favour of long-standing ANC perspective – it is against monopoly capital whatever the colour, while recognising that in South Africa monopoly capital is overwhelmingly white and male – and against the white monopoly capital, or WMC, populist slogan in internecine governing party manoeuvrings. On the radical economic transformation front, the radical was reasserted but in the context of inclusive growth. On corruption, not too many details emerged, except an accountability framework to ensure ethical leadership.

Many resolutions were kicked for touch to the new NEC for further investigations, decisions and actions. But its make-up – or the balance of forces of the different factions – are set to determine the prospect of policy implementation.

On the land without compensation resolution, given all the qualifiers like the sustainability test, a politically prickly policy path lies ahead. DM