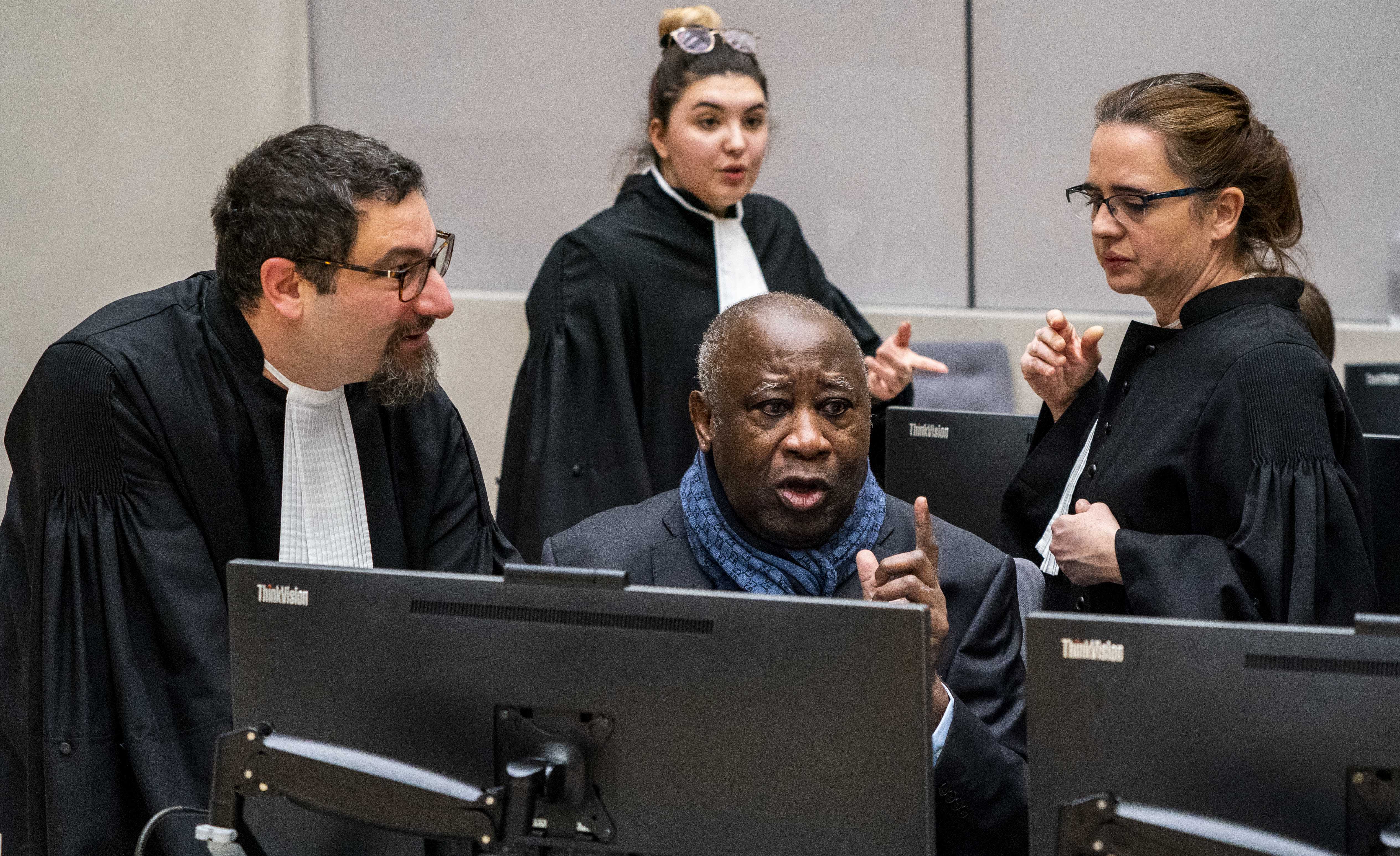 Laurent Gbagbo (bottom-centre) prior to the opening of a hearing of the Board of Appeal of the International Criminal Court (ICC) on his request to reconsider the conditions attached to his release in The Hague, The Netherlands, 6 February 2020. The 74-year-old former Ivory Coast president Gbagbo was acquitted of crimes against humanity in January, but prosecutors appealed against the verdict. (Photo: EPA-EFE/Jerry Lampen / POOL)

Rather than stirring up new controversies, the government should use the former president’s return to resolve long-standing divisions.

After much controversy and a reluctance to issue Laurent Gbagbo’s travel documents, the Côte d’Ivoire government has allowed the former president to return on 17 June to the country.

The decision was presented as a gesture of appeasement and could boost national reconciliation. However, to do so, it needs to be accompanied by a firm political commitment to resolve the disputes that have plagued the country for three decades.

The International Criminal Court (ICC) confirmed the acquittal of Gbagbo and his co-accused, Charles Blé Goudé, on 31 March. The former president was charged in November 2011 with crimes against humanity for his alleged role in Côte d’Ivoire’s 2010/11 post-election violence that claimed nearly 3,000 lives. Gbagbo had refused to concede defeat at the polls.

ICC critics will see this as the third instance involving African defendants in which charges were either withdrawn (the case of Kenyan President Uhuru Kenyatta) or an acquittal handed down (the case of Jean-Pierre Bemba) as a result of insufficient evidence.

Although these outcomes show the rigour of the judicial process, they could damage the ICC’s reputation on a continent where victims mainly depend on international courts to deliver justice for human rights abuses perpetrated by those in power.

The decade-long judicial process and the release of the Ivorian political duo could influence the country’s political future and national reconciliation process. Since President Alassane Ouattara approved Gbagbo’s return at a 7 April cabinet meeting, negotiations have been underway to offer him the benefits provided by law for former heads of state.

According to the Minister of National Reconciliation, Kouadio Konan Bertin, technical commissions have been created to work on all aspects of Gbagbo’s return, which is by no means a trivial event. The triumphant welcome planned by his supporters won’t hide the old tensions that persist in the country and require a new commitment from all Ivorian political actors to solve.

Since the 2020 presidential election, which was also marked by violence and long-standing political and community rivalries, the national reconciliation question has again become pressing. The role of key politicians, including Gbagbo, is at the heart of the debate. His return could give reconciliation a much-needed second chance, although there are significant hurdles to overcome.

Accountability for the 2010/11 post-election violence has still not been established by the national justice system or the ICC. For victims of the crisis, a persistent sense of impunity remains, including concerning Gbagbo’s role. For his supporters though, justice has triumphed. These strong opposing positions will have to be reconciled.

Despite the government’s truth and reconciliation initiatives, justice for the post-election violence is still perceived as targeting Ouattara’s political opponents while other accused evade prosecution. The few verdicts handed down have, in most cases, been for economic crimes or treason rather than the violence committed after the polls.

Another challenge is that the recommendations of the Dialogue, Truth and Reconciliation Commission on land reform, consensual political reform and victim support, among others, are yet to be implemented. Much remains to be done to achieve national reconciliation — certainly more than a triumphant welcome home.

Gbagbo’s return to Côte d’Ivoire could also affect political dynamics among both his supporters and opponents. Conflict within the Ivorian Popular Front (FPI) is tearing apart the political party created by Gbagbo. In his absence, the FPI has been wracked by internal divisions and a lack of leadership. Two rival factions have been vying for power over the past 10 years, one as radical as the other. Gbagbo will have to resolve the division to preserve his party’s unity.

At the national level, conflicts about constitutional and legal provisions also need to be dealt with, and Gbagbo could play a role. These issues include the age limit for presidential candidates, constitutional term limits for presidents, strengthening the constitutional council, an overhaul of electoral management bodies and effective judicial reforms.

Rather than fueling new controversies, the government should use Gbagbo’s return to renew the collective effort to stabilise the country. A new political consensus and national dialogue could iron out persistent political and socio-economic differences and promote respect for democracy and electoral competition. The rule of law and the independence of the justice system also need to be consolidated.

The government needs to address the roots of Côte d’Ivoire’s crisis. The country’s recent political history shows that without this, nothing can be taken for granted, and the danger of instability is never far away. DM