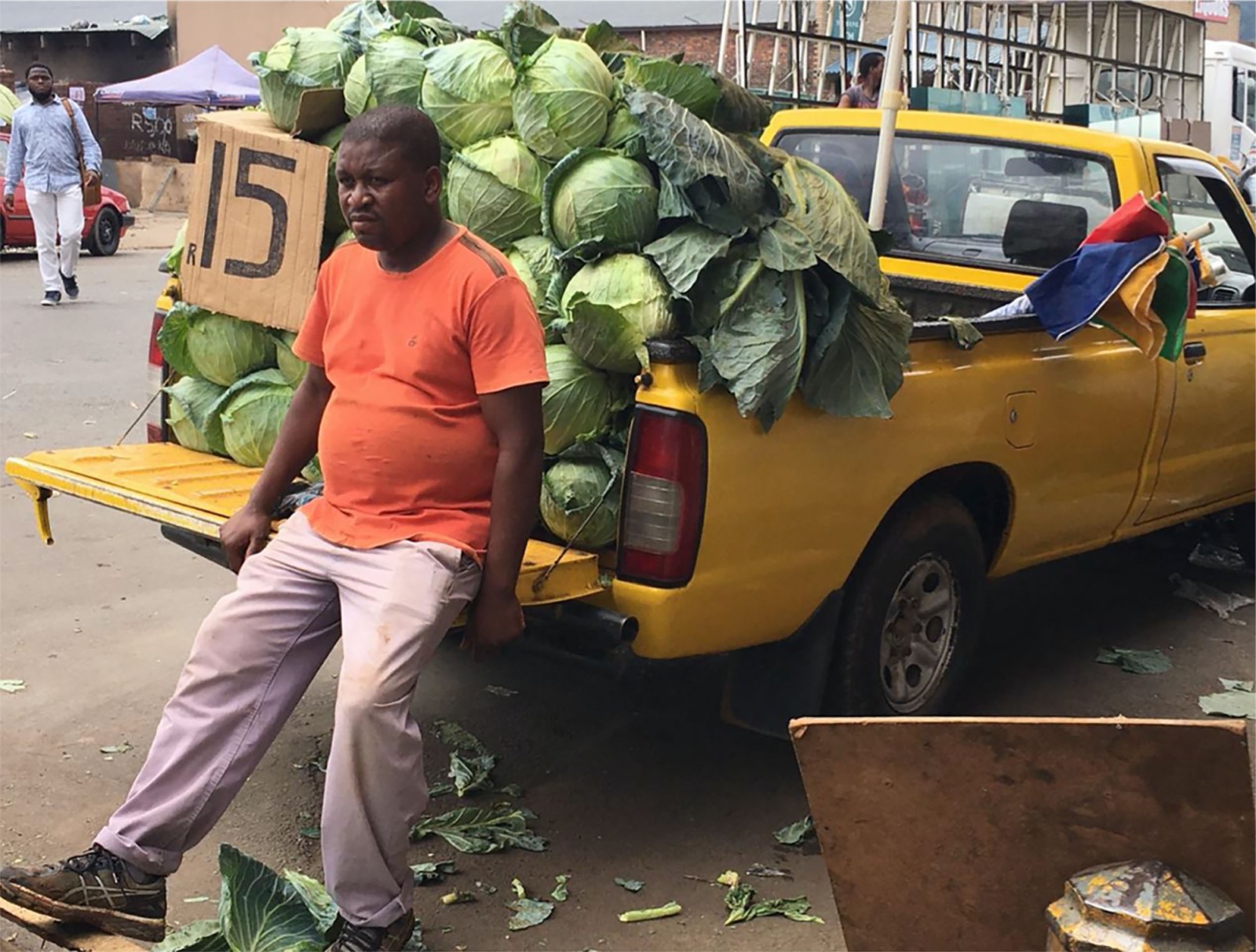 Although many supermarkets made significant profits during South Africa’s hard lockdown, business was hard for small-scale vendors and bakkie traders in Pietermaritzburg, whose incomes fell dramatically.

Nduduzo Majozi is a PhD candidate and Nkanyiso Gumede is a researcher, both at the Institute for Poverty, Land and Agrarian Studies (PLAAS) at the University of the Western Cape. This story is based on field research conducted as part of a study on The Impacts of Covid responses on the Political Economy of African Food Systems in Ghana, Tanzania and South Africa. PLAAS leads this study, which is supported by the Canadian government’s International Development Research Centre (IDRC).

The Maharaj’s fruit and vegetable shop is a family business that has been in existence for more than 50 years. Started by 36-year-old Anne Maharaj’s* great-grandfather, who sold produce door-to-door, it now occupies rented space in Pietermaritzburg’s city centre.

It was thriving before the government imposed a hard lockdown in response to the Covid-19 pandemic in March 2020. It served retail customers and bulk buyers from the area including firms holding government contracts to supply fruit and vegetables to local schools under the National School Nutrition Programme. To meet burgeoning demand, it sourced its own stock from local and more distant smallholder farmers as well as fresh produce markets in Pietermaritzburg, Durban and Johannesburg.

However, business soon stalled after the national lockdown was announced. Very few people came to town as public transport was suspended and even after the total ban was relaxed to allow essential workers to travel in, the streets remained quite empty.

“We had no customers to serve,” said Maharaj. “The police restricted people from coming into town from rural areas.

“A lot of smaller shops closed down because they did not have foot traffic. We were not busy. We used to stand by the door. It was very scary for us.”

The lack of customers led to unprecedented losses for the business. Maharaj had to throw away fruit and vegetables which had rotted. Demand shrank as the firms which supplied schools with fruit and vegetables stopped making orders once the schools were closed and their feeding programmes were brought to a halt.

The income losses meant that the Maharaj family could no longer pay rent or foot the electricity bill, forcing them to arrange terms for the rent with the owner of the building.

In addition, the business was burgled. Maharaj attributed the break-in to desperation among the local community, in which local people who had lost their jobs were struggling to survive.

Even after the lockdown regulations were relaxed, business remained poor. Customers bought fewer fruit and vegetables, Maharaj noticed, perhaps as a result of a drop in income or perhaps out of a desire to spend their money on less-healthy, carbohydrate-heavy foods in a bid to fill their stomachs on a limited budget.

To keep the business afloat and generate enough income to pay their four employees, the Maharaj family decided to diversify and started selling some non-food products.

“We are now selling clothes, charcoal, brooms, wood, whatever little thing, because things have been really bad,” said Maharaj. “We now sell tissues, Sunlight liquid, sauces, sugar beans. What do you do? Even mattresses, and second-hand clothing. That is how bad we have been hit.

“Just to keep our staff, we keep these little things to get a little extra money so that we can pay them.

“We are now selling Avon products. I have a brochure. If ladies like something, they order from me. I then order for them. That’s how bad it is. We even sell cigarettes and feather dusters.”

Although the business still stocks and sells fruit and vegetables, it now orders smaller quantities from fresh produce markets in Pietermaritzburg, Durban or Johannesburg, depending on availability. It has also had to manage the increased food prices demanded by some of its suppliers, which have led it in turn to increase the retail prices for some products.

The losses experienced in the business have had a damaging impact on Maharaj’s life. They have made it difficult for her to pay her children’s school fees and also to pay for electricity and water at home. She says that the losses suffered as a result of the pandemic and the government’s response to it will be felt for some time and she does not see the business returning to pre-pandemic profitability soon.

“No, we cannot recover from something like that. Nobody will ever recover. Probably, it will take up to a year or more to recover from that. It is a lot of money.

“All the six months of debt, who will recover from that? You cannot get that money back.”

The Maharaj family is not alone. The ripple effects have been severe for the small-scale farmers who produce the fruit and vegetables, and the traders who source from them and sell on to shops like the Maharaj’s.

Local bakkie trader, 41-year-old Bheki Sithole, has also struggled to keep his business going. Sithole says that the Covid-19 restrictions which led to farmers charging heavily inflated prices for their produce nearly cost him his business of 11 years.

“Now farmers have increased the prices and this has badly impacted our business,” he said. “What makes matters worse are these big supermarkets who demand discounts when we supply them, only to sell our products later at double the price.”

As Sithole noted, he was left with little option but to keep supplying the larger retail stores: “Although they are robbing me I cannot leave them because they are my biggest customers, their daily order is what I make the entire week.”

This pattern of small suppliers like Sithole being squeezed and even forced out of the supply chain due to the unequal bargaining relationship between the bakkie traders and supermarkets was found to be repeated across the country.

Meanwhile, Sithole came to fear for the survival of his business, much as he had when robbers stole his second bakkie six years earlier, such was the pressure exerted on his bottom line by the price squeezing.

He and other bakkie traders also blamed the government for failing to step in. “The government should have intervened on this issue of prices because it had nothing to do with Covid,” said Sithole. “It was just the producers’ greed and politics.”

Yet there has been little care for the sector under the country’s price regulatory frameworks and at structures such as the Competition Commission, particularly during the pandemic when it has been particularly vulnerable.

Perhaps unsurprisingly then, small informal traders such as Sithole described themselves as excluded and even discriminated against by the state’s interventions under hard lockdown.

As Sithole said: “Our government blocked all of us from doing business which impacted us badly. And we didn’t get any assistance from the government because most of [the official] initiatives included requirements like proof of business addresses which were all impossible for us.”

A key observation here is that although informal trade is permitted by the country and society at large, those involved within the sector see themselves as excluded and stigmatised by the government’s policies and efforts, which are seen as having created more rather than less damaging impacts on local businesses under Covid-19 regulations. DM