The economic ripple effects of Covid-19 lockdown on inf... 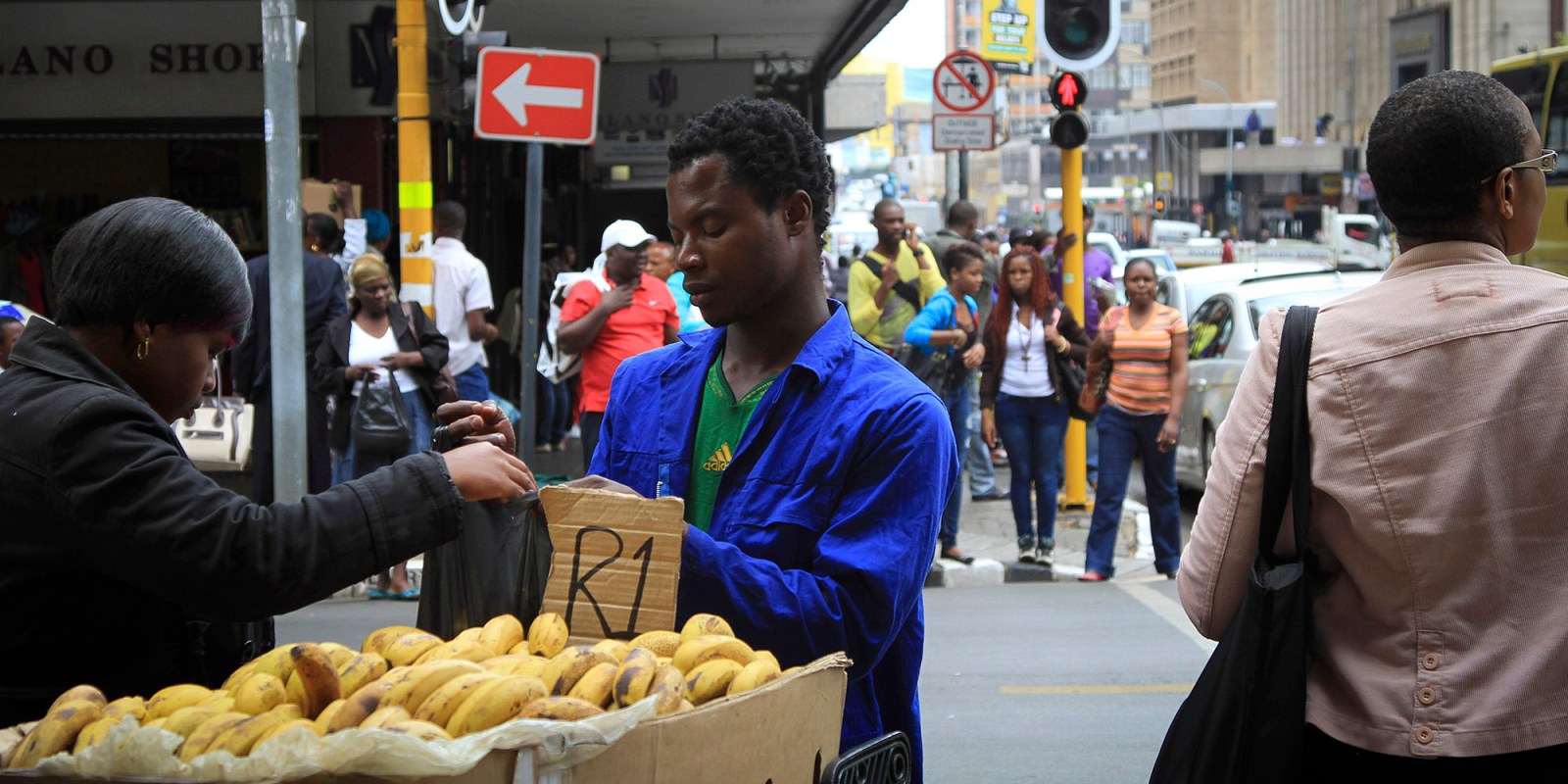 When hard lockdown shut down informal traders, tens of thousands of people were left without an income. Recovery has been hard as food prices have risen and many of their clients are also now without an income. This is one woman’s story.

Dr Marc Wegerif is a lecturer in Development Studies, Department of Anthropology and Archaeology, University of Pretoria. His research focuses on agrarian transformation and food systems. The research that informed this article is part of an African food systems and Covid-19 project supported by the International Development Research Centre.

“Gloria” is standing under a rough shelter made from poles with an old tarpaulin over them. This gives her and the fruit and vegetables set out on a rough wooden table in front of her some protection from the sun and rain. The stall is on the corner of the street where Gloria lives with her four children in Ivory Park, a township outside Johannesburg. The area includes small government-provided RDP houses, many with extensions and other structures added by their owners, and informal settlements with shacks of old corrugated iron and other materials.

Gloria sells mostly fresh produce such as tomatoes, onions, cabbage, carrots, green peppers, potatoes, butternut, beetroot, bananas and apples. As well as selling the produce separately, she puts together mixed packs convenient for preparing common dishes, such as an onion-and-tomato combination to make a basic relish eaten with pap. Another is a packet containing half a cabbage and some carrots ready for making coleslaw.

When I first met Gloria, she was reluctant to talk to me, but when I visited again she relaxed and told me more about her life and business. She is from Mozambique and has been in South Africa and living in Ivory Park since 2000. She started selling fruit and vegetables in 2004 and has supported herself and her family from the business since then. She has four children and one grandchild, all of whom stay with her. Gloria launched her business with a R500 loan from her mother, who earned the money cooking and selling magwinya (similar to a doughnut). Gloria started by buying and selling cabbages and tomatoes and built up the business.

Under Gloria’s table is a wheelbarrow which she uses when she walks every morning to buy stock from Swazi Inn just more than 1km away. Swazi Inn is a busy shopping area, named after a tavern that used to be there, which has emerged as a wholesale, as well as retail, food market.

Gloria works long days. She goes early to Swazi Inn and normally starts selling at about 10.30am, only closing up at about 8pm. But it is not all hard work. She chats to friends who stop at her stall; they are often customers as well. She walks to Swazi Inn with other street traders in the area. Being self-employed gives her some flexibility. On one visit I found her setting up the stall at 1pm as she had been washing clothes at home. She also sometimes brings her children to the stall and she can easily go home to check on them when they are not with her.

For residents of the area, Gloria makes fruit and vegetables accessible. She is close by and sells at low prices. Mihle, one of her customers, said he buys from Gloria because her produce is fresh and the prices good; lower than at the supermarket, he says. On two occasions, two months apart, I bought onions, tomatoes, cabbage, potatoes and a green pepper from Gloria. I compared the prices for the same produce of the same weight from a major supermarket group. Mihle was right, the items cost half what I would have paid in the supermarket.

Another reason to buy from Gloria is that she sells on credit (with no interest) to people she knows from the area. As Mihle explained: “I survive here, yah, she has got a book, I take credit.” Gloria says her customers take food during the month and pay her when they get their wages or state grants.

Things changed for Gloria in March 2020 when the government introduced a national lockdown in response to Covid-19. Supermarkets and other formal food sellers were allowed to operate, since the provision of food was classified as an essential service. However, Gloria and all other street traders had to stop doing business.

“They didn’t want us to sell. I stopped selling,” Gloria said. When I asked how she fed her children, she said “zabalaza” (struggle). She explained: “I put out a little [stock] to sell, I would run when I saw the police.” But this could not go on for long since the traders she bought from at Swazi Inn were also shut down. They were closed for three weeks. Gloria said lots of police and army personnel went there and used rubber bullets.

When the government changed the disaster regulations to allow street traders selling food to operate once again, Gloria heard from her local street committee that she could return to work if she obtained a permit. She went to the Johannesburg Municipality office, about 35km away, and was issued one. Permit in hand, she restarted her business. But others were less fortunate. Another woman, who had been selling fresh produce a few blocks from Gloria’s stall since 2008, told me she had not been able to start again after the lockdown. When she had been prevented from trading, she had lost stock and went several weeks without an income. She had subsequently been unable to find the money to restart and had also seen how slow business was.

For Gloria also, business is not what it once was. She tells me the prices of the stock she buys have risen and people don’t have money to buy as a result of mounting unemployment. The food price increases, which are well above core inflation, and the loss of income as jobs have been shed are confirmed by reports from Stats SA and other organisations. As Gloria says, the situation “has changed truly. People don’t buy, they don’t have money.”

The experience of Gloria’s customer, Mihle, who used to work for a well-known courier company, indicates how jobs have been lost. When I met him in February 2021 he had been on unpaid leave for some months and had not yet received Unemployment Insurance Fund (UIF) money. He hoped to return to work, but did not know when. The problem, he explained, was that he had worked under a labour broker. Like many in Ivory Park and similar areas, those working at the bottom of the labour hierarchy have limited job security.

Meanwhile, Gloria continues her business, albeit at a lower level. She does not have as much stock on her table as she used to before Covid-19 and her turnover and income are lower. The pandemic and related regulations have left Gloria and her family struggling to survive. Her experience also indicates the number of people in disadvantaged neighbourhoods, such as Ivory Park, who are simply unable to buy as much food as they used to. DM