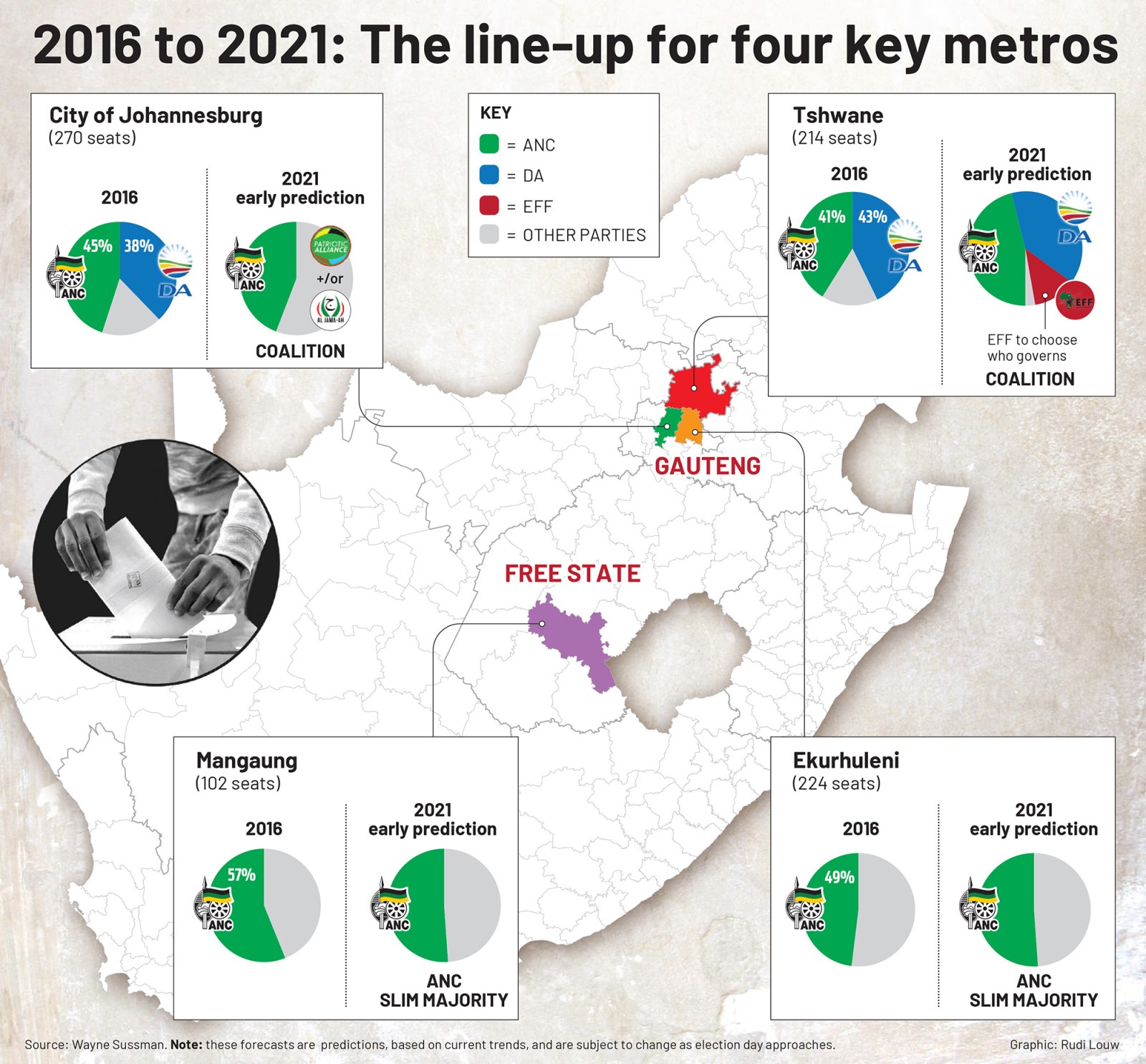 With political party self-immolation, service delivery setbacks and protests, the outcome of the 2021 local government elections is uncertain. Here are our early predictions for four metros:

Any serious sports fan will tell you that it is foolish to predict the World Cup winner before the squads have been announced and the venues confirmed. We now know the venues.

No new municipality will be born after the local government election and none has been merged or dissolved. New wards have been created in some municipalities but this will not materially affect the outcome when the ward and proportional representation ballots are tallied.

Having said that, we do not know the squads. We do not know who is going to defect or retire. We do not know which prominent national or local figures are going to throw their names in the hat and aim to be the Herman Mashaba or Mzwandile Masina of the 2021 local government elections.

We still have to navigate through a third wave of Covid-19, political party self-immolation, service delivery setbacks and subsequent protests. There is a long way to go before our country heads to the ballot box.

Here is a preview of the four northern metros and what could happen the day after the local government elections.

Geoffrey Makhubo and Herman Mashaba each served as mayor between 2016 and 2021. Both will want voters to send them back to the mayor’s office. Makhubo and the ANC will be favoured to finish well ahead.

The big question is whether the party can breach the 50% mark. They got 45% of the vote in 2016. The party will rely heavily on President Cyril Ramaphosa and his reform agenda, while the ANC’s opponents will want to blame the party for its mishandling of electricity, water and the general management of the metro. Mashaba – the first mayor of the current term – ditched the DA and formed his own ActionSA.

ActionSA generates a lot of interest on Twitter. But it is one thing to win a poll on Twitter; it is a much tougher proposition to win wards and seats in a local government election. At this stage, Mashaba and his party will be favoured to finish in fourth place and will hope to be the kingmakers of the city. The DA came second in 2016 with 38% of the vote.

The DA has lost safe seats in Riverlea and Eldorado Park and also lost wards in Marlboro Gardens, Ennerdale and Lenasia South. Despite their many troubles, they will still be favoured to finish second. The question is: can they still motivate their base to turn out with the same vigour five years ago?

The EFF came third in 2016 with 11% of the vote and will want to ensure that it has the final say in who steers the city for the next five years.

Gayton McKenzie and the Patriotic Alliance (PA) are well set for a top-five finish. If they choose to work with the ANC, they could be the one party with enough seats to ensure the party has a stable coalition if it falls just shy of 50%. The Inkatha Freedom Party and Al Jama-ah could have a say in the future government of the city.

Current Prediction: The ANC to fall just short of 50%, but to continue governing the city with one or two smaller parties, in a more stable coalition than present. Al Jama-ah would be a stable coalition partner, but it would depend on whether they propel the ANC over the 50% mark in seat allocation.

Masina will hope to be on the top of the ANC ticket when he runs for re-election. He will also believe that the ANC can win the municipality outright this time, after falling short by three seats in 2016.

This has been the most stable of the Gauteng metros, but Masina will not want to rely on coalition partners for the next term. The DA will be expected to remain the second -biggest party here but will hope that they do not lose too much support to the Freedom Front Plus (FF+) and ActionSA.

The EFF are favoured to finish comfortably in third place, with ActionSA and FF+ vying for the fourth position.

Current Prediction: The ANC to win a narrow outright majority.

The DA shocked the ANC in 2016 when they beat the party and removed them from power with their coalition partners and the outside support of the EFF. Current DA Mayor Randall Williams will have his work cut out when trying to replicate the 2016 result.

It was predicated by a remarkable turnout in the suburbs and breakthroughs in parts of Soshanguve. Realistically, the DA will aim to bring the ANC under 50%. It is the most likely outcome at this stage.

The EFF are once again expected to be the kingmakers while the FF+ will have many more councillors in the local government elections. It is hard for new entrants to make their mark on Tshwane politics and these four parties will determine who gets to govern the municipality for the next five years.

Current Prediction: The ANC to get less than 50% and the EFF to be left with the agonising decision on whether to bring the ANC back to power in the capital or ensure the opposition keeps the ANC out of Tshwane for another five years. But this time they would look at sitting in the coalition.

The ANC won 58 out of 100 seats in 2016. The party has battled to use its majority effectively in the Free State capital. The metro has been plagued by ANC infighting and major service delivery protests. It is also unclear what the impact of Ace Magashule’s absence will be on the Bloemfontein ballot.

Free State ANC supporters of President Ramaphosa are enthusiastic about  Mxolisi Dukwana and the newly installed ANC Free State interim provincial committee. They believe he will be able to win back voters’ trust in the province.

The DA will hope that the state of the municipality will see their voters energised to effect change via the ballot box, while the FF+’s prominent Free State leadership will ensure that the party sends many more councillors to the council chambers.

The EFF should remain the third-largest party in the metro. It remains to be seen whether the Mangaung Community Concern (MCC) – the party at the centre of the recent Mangaung shutdown – will endorse a reformed ANC in the metro, remain outside party politics, or contest as a local party.

Two other parties to watch are the PA and the Afrikan Alliance of Social Democrats (AASD). McKenzie will want to make a splash in his hometown with the PA, while the AASD is led by former Mangaung Mayor Papi Mokoena. This metro will expand from 100 to 102 seats after the elections.

Current Prediction: If the protests and frustration of groups like the MCC subside, the ANC will win a slim, outright majority.

A lot will happen between now and the elections. We will have more power cuts, service delivery failures and remarkable promises from politicians.

Let’s wait for those squads to be announced. We will certainly need to review this, closer to election day. DM168

Sussman is an elections analyst. Watch out for upcoming articles and analysis on the road to local government elections, with the polls scheduled for 27 October, 2021.