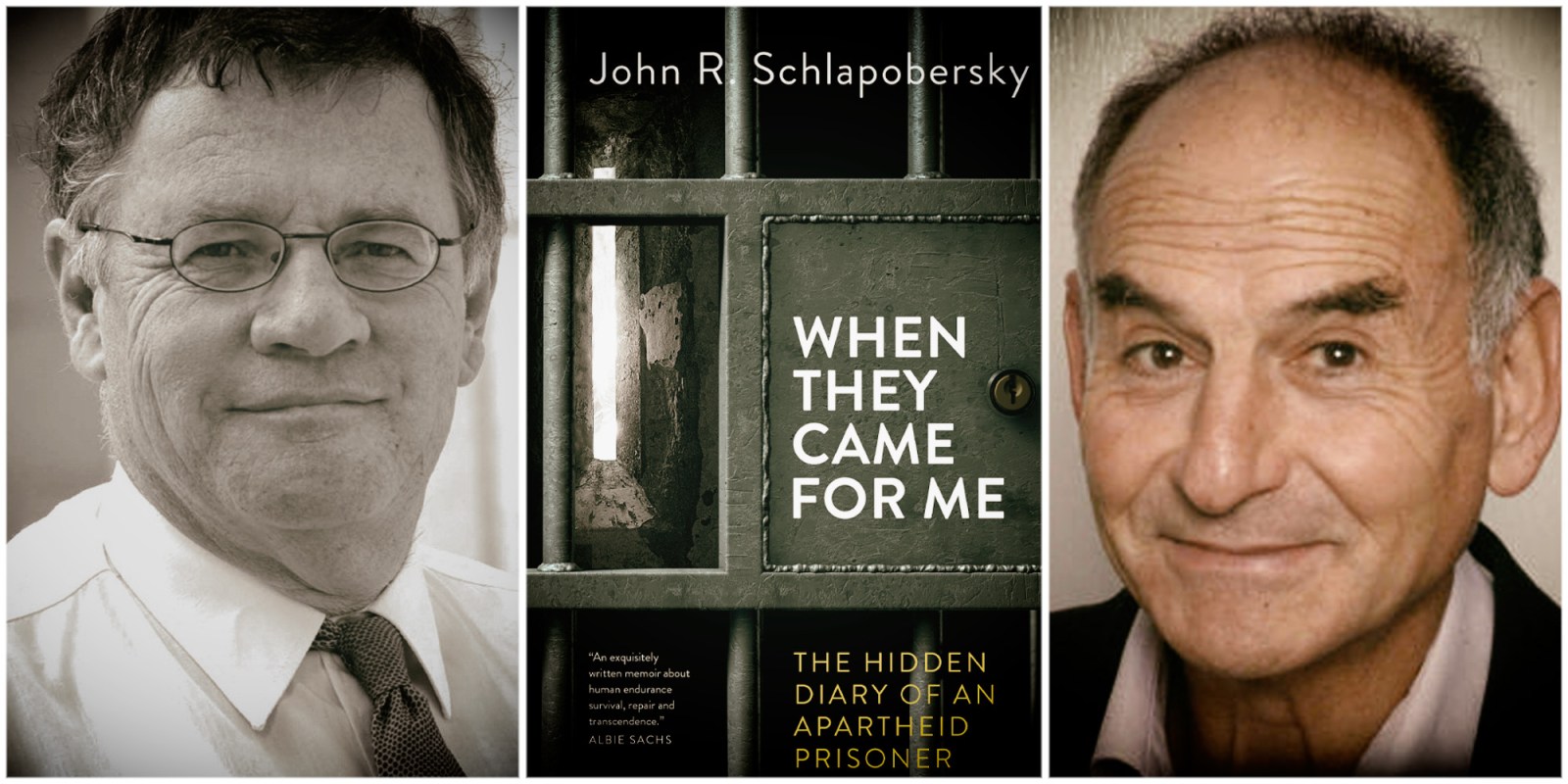 In a Daily Maverick webinar, psychotherapist John Schlapobersky, the author of the memoir ‘When They Came For Me: The Hidden Diary of an Apartheid Prisoner’, recalls his arrest, detention and torture.

“This place is so horrifying that the sensitive parts of one’s self close up to shut it out, like certain flowers do at night,” reads one of the salvaged toilet paper-diary entries of a 21-year-old anti-apartheid activist detained in solitary confinement.

Like most of those imprisoned with him, he was tortured by the guards, and haunted by singing voices coming from the gallows nearby.

“If one remained here for long enough, these parts would never be able to open again. But there are birds singing in the trees outside. Their songs penetrate even the heavy locks and unmitigated gloom of captivity,” wrote John Schlapobersky to his girlfriend in his makeshift diary.

At the time of the entry, it was 1969 and Schlapobersky was a Wits student, dreaming of living in a non-racial South Africa.

He spent 55 days in solitary confinement in a bare cell with only a slop bucket, a roll of toilet paper, disinfectant, a jug, a mug, two blankets and his Bible. Afterwards, he was deported to the UK.

On 13 June, it will be 52 years since his arrest on Friday, 13 June 1969. It has been more than half a century since apartheid state officials shoved Schlapobersky into an interrogation room and locked the door.

“The sound of the door closing and the lock going… felt like the end of my life. I thought I would die,” Schlapobersky recalled in a Daily Maverick webinar discussion on his memoir, When They Came For Me: The Hidden Diary of an Apartheid Prisoner. The book will be launched on 13 June.

His girlfriend, and later his wife, who remained in his mind throughout his time in prison, would become his guardian angel, he said.

Schlapobersky’s first book, From the Couch to the Circle: Group-Analytic Psychotherapy in Practice, was published in 2016 and won the Alonso Award for Excellence in Psychodynamic Group Theory.

His second book — which comes from his memories of his days in detention and the two diaries he kept at the time, one written on toilet paper and another on his Bible — was a therapeutic quest.

The quest itself was “certainly not easy to deal with, but necessary”, said Schlapobersky, now a distinguished psychotherapist. “I want to be free from these people [his interrogators and jailers] as far as I can be,” he said from his London home.

When Schlapobersky was detained, he was interrogated by the feared Lieutenant Theunis “Rooi Rus” Swanepoel, as well as a Major Coetzee.

“What I want to be able to say to them is: right is not on your side and history has proved the darkness of your deeds and misdeeds,” Schlapobersky said.

The book, however, was not intended to present himself to the world as a victim.

“It was a dreadful ordeal. It’s not the kind of ordeal you ever leave behind you. You can celebrate that it’s over and you can celebrate that the cause you stood for, the liberation of South Africa, is a reality. But, the ordeal itself is never far away, it is at the back of your shoulders,” said Schlapobersky.

He described to Davis his movements in poetry circles — with the likes of Lionel Abrahams — before his arrest just after his 21st birthday.

“We were struggling with [the horror of apartheid] and trying to do it in poetry,” Schlapobersky said, “…then, we were arrested, and that was the end of my South African life.”

Most detainees during apartheid were “almost prepared” for imprisonment because they knew the risks of getting involved in the struggle against apartheid, Davis noted. There was a chance, not only of detention, but of death, he said.

Schlapobersky said that during demonstrations at university, everyone knew who “the bad guys” were, but being imprisoned never crossed his mind.

“I never did anything that warranted arrest,” Schlapobersky said, adding that he had a British passport and that his link to the British put him on the bad side of Swanepoel and Coetzee.

“The nature of the hatred that I saw from Swanepoel and Coetzee towards the fact that I carried a British passport, it was even worse than a hatred towards a communist,” he said. “I felt his hatred. I knew it.”

What was fuelling this hatred, according to Schlapobersky, was probably the devastating history of the Anglo-Boer war.

For Schlapobersky to be arrested in the face of his good-willed intentions, was “sheer, riveting sadness”, Davis remarked. DM