When They Came For Me: The Hidden Diary of an Apartheid Prisoner 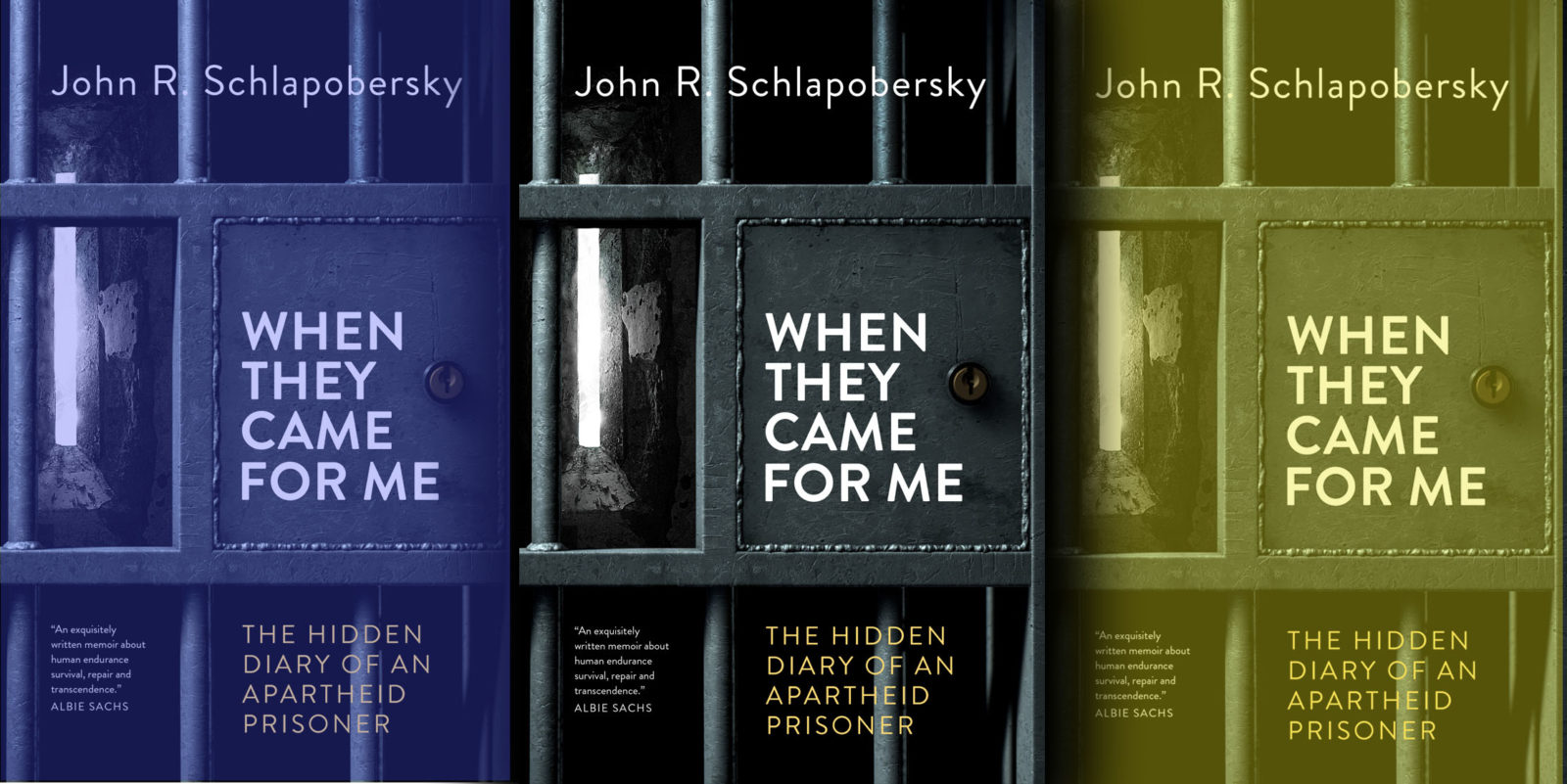 When They Came For Me by John Schlapobersky.

In 1969, while a student at Wits University, anti-apartheid activist John Schlapobersky was detained in solitary confinement, tortured and eventually deported. Half a century later, calling on memory and two diaries he kept at the time — one written on toilet paper and the other in the Bible he was allowed — he reconstructs, in moving detail, the struggle for survival that finally transformed his life. He is now a leading psychotherapist and author and works closely with those who have similar histories. ‘When They Came For Me’ is published by Jonathan Ball.

John R Schlapobersky is a consultant psychotherapist. He won the Alonso Award for the outstanding publication in psychodynamic group therapy for his book From the Couch to the Circle: Group-Analytic Psychotherapy In Practice (Routledge 2016).

I have no recollection of the journey back to prison after my interrogation ended but do have a memory of being strip-searched outside my cell while, secretly, I did what I could to guard the treasure I had with me — the stolen pen hidden in my underpants. Protecting it brought me out of the sleep I must have been having on my feet. Once inside the cell I found the other treasure, the Bible that had been taken off my bookshelf — it was still here waiting for me.

As the door slammed, I collapsed on the “bed” — a felt mat on the floor in one corner that had two woollen blankets folded on it. I struggled to get my shoes off and found that my feet were bruised and discoloured. Like my ankles, they were more than twice their normal size, so removing my shoes was difficult. I had not washed or bathed for almost a week and discovered that the smell — what I had thought was burning rubber in the Compol car park — was coming from my shoes, feet and socks. The bruising was extensive in the arch of each foot, rising on the instep and up around the ankles. The swelling extended to my knees. Propped against the wall in the corner of the cell and alone for the first time in days, I began to weep, stricken with a kind of crying I have never known before or since.

The pen was my solace, and I began the first of many letters to my girlfriend Janet, each written on two sheets of toilet paper. I had no idea if this would work, but I tried it out and found it would do. I tore one sheet off the toilet roll that stood beside the slops bucket and, tucking myself up in the blankets on the mat in the corner, I found that I could lay a sheet on the Bible and write onto the toilet paper’s fragile surface with careful concentration.

I can recall little of the content but used words on the page to reach out in love and desperation. Then I rolled my message round the pen and stowed it away underneath my trousers which I used to make a pillow in the corner, and I then fell asleep for more than twenty-four hours.

Afterwards I began a pacing routine that occupied much of my time in the days that followed. There was nothing in my cell except a slops bucket for a toilet, a roll of toilet paper, a bottle of disinfectant, a water jug and a mug, two blankets on a felt mat against the wall and my Bible. The cell was six paces long and three paces wide. There was a barred window high on the outside wall in the top right corner through which I could see the sky.

The cell had been painted a familiar hospital green in recent years. There was writing on the left-hand wall just above my bed. There were also other marks and initials elsewhere on the walls that had been covered over by paintwork, but this one inscription was fully readable: “KNOX MASI FOR MUDER I WAS SENTENCE…”. He never finished his sentence on the wall. Did he finish his prison sentence? What was his fate?

This third day in solitary was unbearable. The confinement was suffocating. There had been no overnight singing and I missed the men’s voices. I still had no idea who they were or why they sang through the night, night after night. On Saturday morning there were no voices. Each day, the periods after the shower and before and after the outside exercise were the most difficult because, each time I came back and the door slammed shut, the cell felt smaller and smaller. I did twenty-five press-ups and some other exercises, and then immersed myself in the Gospels. And then I paced. And paced. And paced. And then I would sit down and sing.

I sang Simon and Garfunkel’s “Sounds of Silence” that had seen me through the interrogation. Their song, “A Most Peculiar Man”, would bring me close to tears, though I could not remember all the verses. We had had a gathering at our home on the Saturday night before my arrest, when we lit a fire in the grate and sang as one of our friends played this on his guitar. It gives haunting beauty to anonymity, confinement and death by suicide. Its desolation answered my state of mind, and I sang the lines I could remember repeatedly.

Today was the winter solstice. In the afternoon I took myself in hand and drew up a calendar in the flyleaf of my Bible. The entry has Saturday 21 June as its heading. I drew it up for six months — June to November — and hatched across the dates from Friday 13 to Saturday 21 June to mark out the period over which I had already been detained. My markings are consistent, confirming that they were all done at the same time. One of the surviving entries to my toilet paper diary reads as follows:

This place is so horrifying that the sensitive parts of one’s self close up to shut it out, like certain flowers do at night. If one remained here for long enough, these parts would never be able to open again. But there are birds singing in the trees outside. Their songs penetrate even the heavy locks and unmitigated gloom of captivity.”

The clatter in the corridors outside and the sound of shovels scraping in the yard below opened the day once more. And then the singing — but then it came to an end… silence. After half an hour the prison noises began again without the singing. The warder who later collected me for the shower was a different person, someone I had not seen before. He spoke no English and looked like he had been crying. He was a young boy aged no more than eighteen or nineteen, and it looked like he had not started shaving yet.

As we went down the corridor to the bathroom, I asked him in Afrikaans if anything was wrong: “Meneer, is iets verkeerd?” [Sir, is anything wrong?] He explained that he had helped to officiate at the hanging this morning. Normally it did not worry him but today it did, he said, and he went on: “Die kaffer wat vandag opgehang is, was jonger as ek” [The kaffir who was hanged today was younger than me].

He went on to explain that the people who sang through the night were the condemned, “die veroordeeldes”. We did not hear them on Friday or Saturday nights, he said, because the hangman did not work on the weekends. And now I knew whose voices had been consoling me and why they sang as they did.

The day had further differences. When taken into the courtyard for exercise later in the morning, I was directed to a chair and told to sit down while another warden put a towel round my shoulders and went on to cut my hair. There were no formalities and there was no discussion. I watched my hair fall on the concrete around me and then, when I got up off the chair, I watched them wash it down the gutter with a hosepipe. Seeing my hair going down the drain was now the lowest point of all the low points.

So, the gallows were nearby, and I was amongst the last to hear people’s voices before execution. Violation overwhelmed me and stayed with me throughout the day, shaped by the picture of my shorn hair going down the drain. Violation was still with me in the evening. I did not sing at all that day and spent it in a subdued state immersed in the Bible. DM