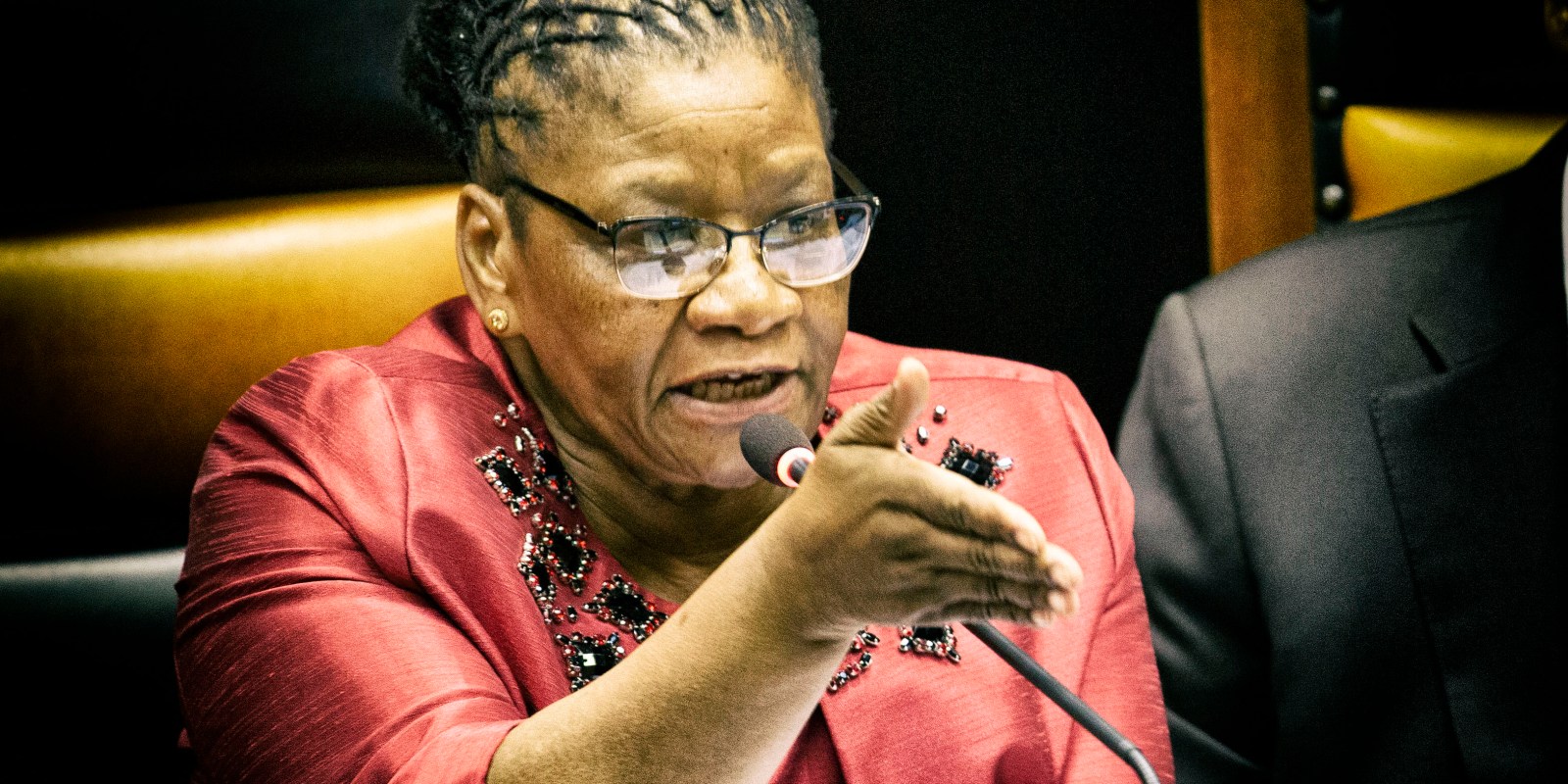 National Assembly Speaker Thandi Modise reminded MPs that nothing stopped them from quality oversight – the rulebook allows committees to set their working arrangements, and to summon anyone. But during Tuesday’s parliamentary budget vote debate she acknowledged the scramble for more resources was tough.

“When we go talk about the budget of Parliament, we talk with people who do not understand Parliament. We talk to directors-general who think we are just another department.”

National Assembly Speaker Thandi Modise did not mince her words. Perhaps it was time for Parliament to say to those who think they hold the purse strings that, “until you listen to us, we will not pass your budget”. That is one of Parliament’s hard-fought-for powers, which to date the national legislature has not exercised.

“It [Parliament] holds the purse because it directly represents the people in the streets.”

Parliament also is in discussion with former MPs, including ministers, over their benefits, including flights for them and their spouses, which come to Parliament’s account.

Crucially, Parliament wants to ditch having to administer funding support for constituency offices that political parties represented in Parliament run. Instead, such funding should go straight to political parties, which then account directly to National Treasury, said Modise.

Her comments came as the Organisation Undoing Tax Abuse (Outa), in a statement on Tuesday, raised exactly this point.

“We have exhausted nearly all channels available to us to get basic information from all political parties represented in Parliament about their constituency offices,” said Outa parliamentary liaison Chris Scholtz in a statement on Tuesday about the R375-million made available for funding constituency offices.

“These offices ostensibly translate community struggles into items on the parliamentary agenda, but is it really happening? Unfortunately, we don’t really know.”

Political parties get their constituency allocations in four tranches every year, on receipt of audited financial statements. This long-established process does not account for the impact, or lack thereof, of constituency work on Parliament.

Down the corridor in the National Council of Provinces (NCOP), money and resources ran through chairperson Amos Masondo’s speech as the council also debated Parliament’s budget, albeit separately, on Tuesday.

This included voluntary retirement at age 55, for which about a quarter of Parliament staff, or 375, will qualify at a cost of R265-million – although half of those posts would be filled with young workers at entry-level salaries. It’s a prickly proposal, as Parliament and the National Education, Health and Allied Workers’ Union (Nehawu) have for months now faced off over bonus payments.

Masondo indicated that relocating Parliament from Cape Town as per the 2015 proposal by then president Jacob Zuma was off the table now. “I hope that members will understand that this is a debate we do not want to entertain under the current economic climate.”

In the National Assembly, EFF MP Veronica Mente also raised relocation. Not moving Parliament to a more central location was “irrational” and would not help public participation.

“[Parliamentary] committees that behave like they’ve been appointed by ministers are also problematic,” she added.

Stop with the sweetheart questions. You are not doing any favours to anyone in South Africa. How can a minister or deputy minister stand here and answer a follow-up question from a script? How can you give them the answers?

That was a sentiment shared widely on the opposition benches.

“I must strongly object to people implicated in personal protective equipment scandals to still sit here, or serve as chairpersons,” said DA Chief Whip Natasha Mazzone. “How do we expect the country to take us seriously?”

Her deputy, Jacques Julius, said more money did not necessarily mean better accountability. That called for ANC MPs to do their bit by asking “more uncomfortable” written and oral questions.

“Stop with the sweetheart questions. You are not doing any favours to anyone in South Africa. How can a minister or deputy minister stand here and answer a follow-up question from a script? How can you give them the answers?”

A follow-up question is meant to come spontaneously from the floor of the House, and is not given ahead of time so that an answer can be prepared.

Freedom Front Plus Chief Whip Corné Mulder agreed. It was not a question of committees and MPs not being well resourced, it was a question of political will. “The executive and the legislative branch are too close. Madam Speaker, 74 of your caucus are members of the executive.”

“We are not in opposition to our Cabinet,” said ANC MP Khaya Magaxa (also public enterprises committee chairperson), in response to opposition calls for better parliamentary oversight from the ANC, which holds the numerical majority in the House and every committee.

Instead he called for Parliament to continue training and resources for enhanced oversight. “A soldier only dressed in uniform without training will perish in the first battle.”

That’s about as good as it got. From that side of the House.

Mulder had called for a return to “normality within the reality of Covid-19”, moving that online committee meetings and hybrid sittings be at least 50% in-person.

With much said about parliamentary oversight and resources, Modise got the last word.

“No one needs an inquiry to do its work. One of the powers [of Parliament] is to determine their own way of working,” said the speaker.

“Any member who agrees to be on a ballot to come here should be able to ask a question in any of the 11 languages. Members of the ANC have no excuse not asking the hard-hitting questions.”

And Modise tackled the opposition criticism of her apology for shoddy parliamentary oversight at the State Capture Commission.

“It is regrettable that the impression is Parliament only woke up when things were really bad. For that we must apologise to the South African people,” Modise told Deputy Chief Justice Raymond Zondo on 19 April in the wake of previous testimony that showed how political imperatives trumped oversight.

“I went there because Zondo needed to hear certain things… to understand why certain decisions were taken or not taken… [and] to explain how Parliament works.”

Most of the work of elected public representatives in Parliament was about “finding the middle”. It was about talking it out.

“You don’t win any constituency position by being antagonistic, by fighting. What we then do is we harden the divisions in the country.”

Parliamentarians needed to come together, said Modise. “We have been borrowed the time [sic] to come serve here.” DM