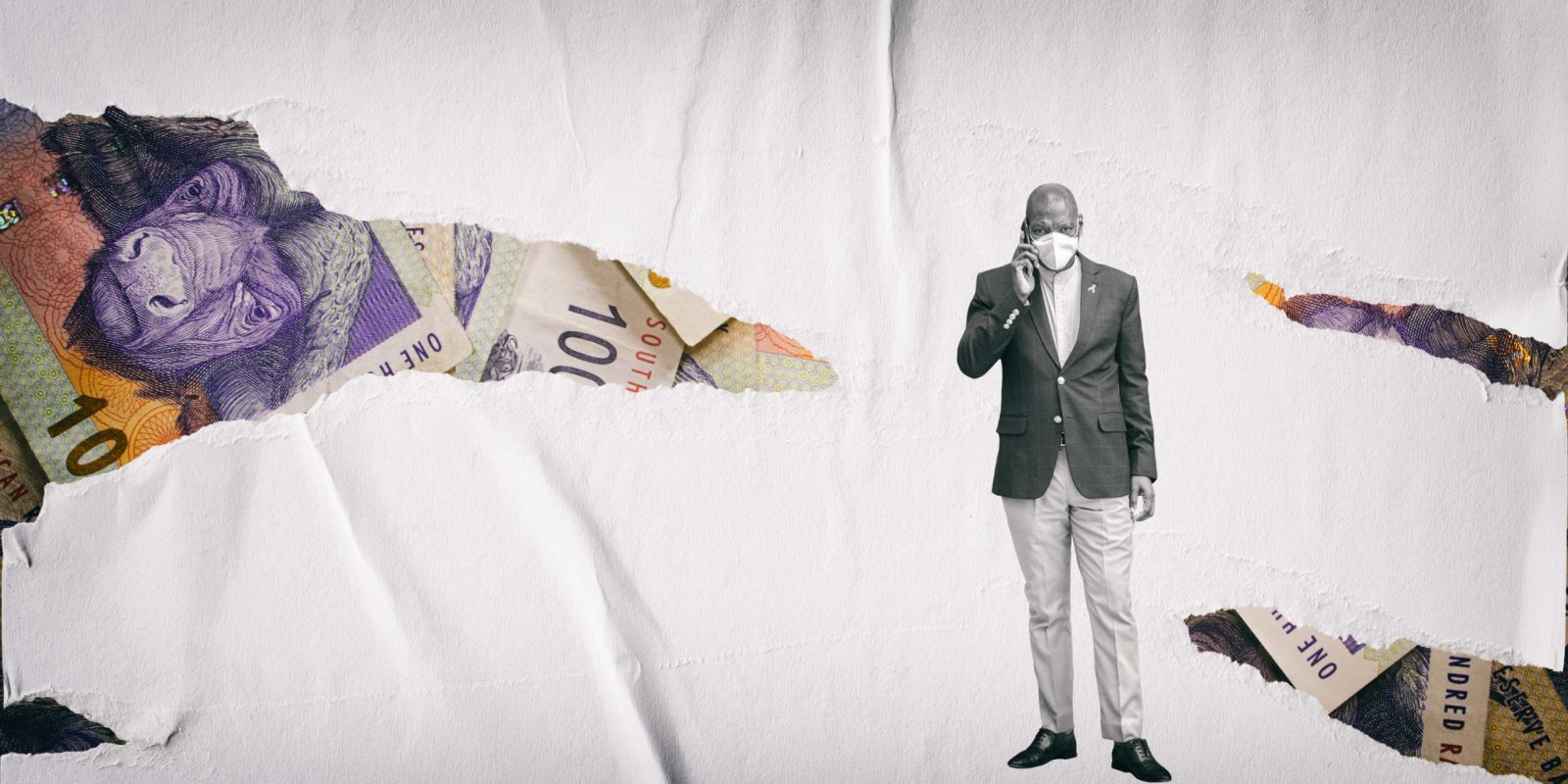 There are no simple routes out of the problem for Mkhize, President Cyril Ramaphosa or the ANC.

Last Friday President Cyril Ramaphosa said he was waiting for a full report from the Special Investigating Unit before making a decision about Health Minister Dr Zweli Mkhize. Just a few hours after that came evidence that Mkhize had indeed personally benefited from the contract signed by his Health Department with the company controlled by his former personal assistant.

Pressure is now growing on Ramaphosa to act.

But this is an incredibly complicated situation, which could have implications for the ANC’s step-aside resolution, and for the way in which the government deals with the pandemic. There are no simple routes out of the problem for Mkhize, Ramaphosa or the ANC.

The Digital Vibes exposés by Scorpio’s Pieter-Louis Myburgh started in February, revealing how Mkhize’s long-time personal assistant, Tahera Mather, and his former personal assistant, Naadhira Mitha, had controlled a company called Digital Vibes, and that that company had won a contract from the Department of Health to provide communications about National Health Insurance.

The Digital Vibes contract, after being expanded to cover the Covid-19 pandemic too, was worth at least R150-million.

It was also revealed by Myburgh that in some cases Digital Vibes was invoicing the department to coordinate media interviews. One example saw the department being told to pay more than R3-million for an interview with SABC television news. This was not a purchase of TV advertising space and the SABC did not get any money – this was just to arrange the interview with a national broadcaster, a cover-up so stupid it could have been laughed off as a bad joke. But it was not a joke.

On Wednesday Mkhize said his department’s own investigation had found that the awarding of the contract was irregular, and thus all of the money paid to the company was considered as irregular expenditure.

However, he denied benefiting from the contract personally.

And he can no longer claim that he did not know. As Myburgh reported in a Friday evening blockbuster, money went from Digital Vibes to Mkhize’s son and towards work on his own home.

This appears to show that Mkhize was wrong to claim he did not know about the contract, and that he lied about it.

Mather’s relationship with Mkhize is well known. When Mkhize was the ANC’s treasurer, and particularly when he was running a low-key campaign as the “middle-way” candidate for the leadership of the ANC in 2017, Mather was the person many journalists contacted to get access to Mkhize. She arranged interviews (including with this writer), and coordinated some of Mkhize’s activities.

Then there is what may be a bigger problem.

From the beginning, there was clearly an intent to deceive.

Mather and Mitha did not register Digital Vibes in their name, and the principal director is Radha Hariram. And while it is her signature on the paperwork, it is Mather and Mitha who made the decisions and benefited from the proceeds (Hariram got only a fraction of the money). Further evidence of duplicity lies in the fact that when they applied for the contract, they submitted the CVs of people they were clearly not going to employ as part of their company.

This leads to the obvious question: Did Mather and Mitha win the contracts because of their relationship with Mkhize?

It will be hard to argue that they did not. While the paper trail will be important, their relationship with him has just been too close and obvious for all to see. And even if it is not Mkhize’s signature on the contract, there are countless cases where influence wins contracts even without direct control over the signature.

It will surely be impossible to show that the department got value for money. How do you demonstrate value when a company was invoicing millions of rands simply for setting up interviews – with a public broadcaster in the middle of the pandemic?

On that count alone, being in charge of a department paying someone else to arrange interviews, at such an exorbitant cost, when there is a staff to do the same work, could well result in some sanction against the minister.

This means Ramaphosa is faced with one of the worst governance problems of the moment. He leads a party badly damaged by corruption, in an election year, with a health minister facing the most pressing questions about wrongdoing, just as the third wave of the pandemic may be about to hit.

Here the parallels with the situation of the former Gauteng Health MEC Dr Bandile Masuku are stark.

Masuku too controlled a department that awarded a contract to a company controlled by a close friend. He too has claimed that while he may have had oversight responsibilities, he did not benefit from the contract.

To add to Mkhize’s misery, this is not the only problem he is faced with.

The Sunday World reported recently that it had seen an affidavit claiming that in 2005 Mkhize had helped to arrange for government money to be used for the legal fees of Jacob Zuma.

Mkhize was KwaZulu-Natal Health MEC at the time. While this story has some way to go, it adds more pressure to his already difficult situation.

The situation presents several people with a massive political headache.

It would surely be difficult for Ramaphosa to remove Mkhize for several reasons.

The first is that Mkhize has not yet been charged criminally. Due to the dispute in the ANC around the step-aside rule (and primarily with suspended Secretary-General Ace Magashule) this is hugely complicated. Ramaphosa has implemented the NEC’s resolution that people criminally charged must step aside. Magashule and others argue that the ANC’s Nasrec resolution must be implemented: that those implicated in corruption should step aside.

And if Ramaphosa were to remove a Cabinet minister because they were implicated in wrongdoing, he may have to remove half of his Cabinet (a brief list: Gwede Mantashe has had to deny claims of wrongdoing in the Karpowership contract, Defence Minister Nosiviwe Mapisa-Nqakula smuggled a young woman into the country using a government plane, Transport Minister Fikile Mbalula took money from a sporting goods supplier for a holiday… and there are other examples).

Then there is the problem of the pandemic.

Up until this scandal broke, Mkhize had been trusted by many. His status as a doctor, his ability to communicate, his simple governance experience and his general accessibility helped during the early days of the pandemic. If he were removed, it would also mean that South Africa would have lost a national health minister and two health MECs during the pandemic (Masuku in Gauteng, and Sindiswa Gomba, who was fired in the Eastern Cape).

Also, Mkhize would have to be replaced.

Finding the right person in the ANC and in Parliament to replace Mkhize could be very difficult (the previous minister, Dr Aaron Motsoaledi, is still in Cabinet, is a medical doctor and has experience, but Cosatu campaigned for him to be forced out of the health department; another former health minister, Dr Nkosazana Dlamini Zuma, may not be a popular choice with some of the scientists running the vaccine roll-out).

This means that Ramaphosa may come under pressure to appoint a non-political candidate, someone not from the ANC but who is universally respected, highly regarded and understands how our health system works. (The rule allowing for only two ministers and two deputy ministers to be a non-MP also complicates the choice. And it is by no means certain that Mark Heywood would take the job.)

Then there are other political considerations.

Mkhize is a former leader of the ANC in KZN, and it is well known how important and how divided that province can be. For him to lose his position in Cabinet may have important implications for the political balance within the ANC. Ramaphosa may not want to do anything to upset this already complex situation.

And yet, he may not have a choice. It’s an election year, the evidence is too strong, the duplicity too obvious, the money too much. The people are angry.

This means Ramaphosa is faced with one of the worst governance problems of the moment. He leads a party badly damaged by corruption, in an election year, with a health minister facing the most pressing questions about wrongdoing, just as the third wave of the pandemic may be about to hit.

What could possibly go wrong? DM