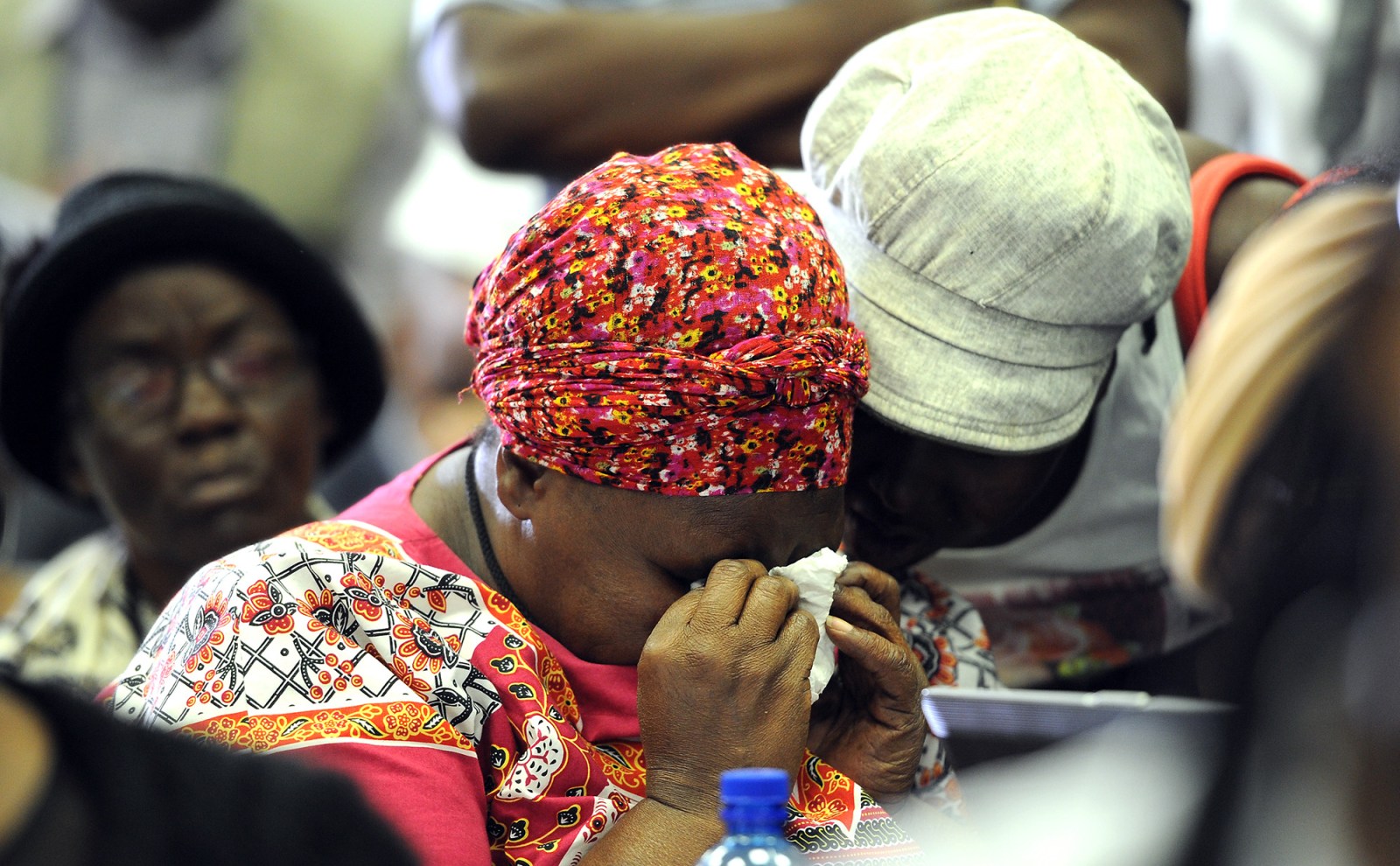 Bertha Molefe, who lost her daughter breaks down during the media briefing by the Health Ombudsman to announce the final report on the Life Esidimeni psychiatric patients’ deaths on February 01, 2017 in Pretoria, South Africa. The report into the deaths of psychiatric patients transferred from Life Esidimeni healthcare revealed that 94 patients died and not 36 as recorded by the Gauteng Health Department. Health MEC; Qedani Mahlangu announced her resignation following the tragic incidents. (Photo by Gallo Images / Beeld / Felix Dlangamandla)

In the arbitration award in the Life Esidimeni tragedy, former deputy chief justice Dikgang Moseneke found that the vulnerable people evicted from the hospital had suffered severe ill-treatment and torture. Indeed, the word torture appears 47 times in the award. Yet there have been no prosecutions. SECTION27 hopes an inquest starting in July may change that.

I often think about the opening words of Justice Dikgang Moseneke in the arbitration award, handed down in 2018 at the conclusion of the arbitration following the deaths of more than 144 mental health care patients in Gauteng. He said: “This is a harrowing account of the death, torture and disappearance of utterly vulnerable mental health care users in the care of an admittedly delinquent provincial government.”

The world heard in the words of bereaved families how their loved ones, who were vulnerable and in need of care and protection, were treated in the mental health system. The arbitration found that they had suffered severe ill-treatment and torture. Indeed, the word torture appears 47 times in the award.

There was a national outcry when the deaths of more than 144 vulnerable patients came to light.

A call for accountability and for justice for the bereaved families and for those patients who survived the horrible ordeal was heard around the country and the world, with UN experts saying: “Transferring persons with disabilities to unsuitable locations without their consent and adequate support may result in further grave abuses to their right to physical and mental integrity, health and wellbeing, an adequate standard of living including adequate housing, and places them at risk of extreme poverty, homelessness and loss of dignity.”

The arbitration went some way to address the human rights violations, providing some closure to the families, as well as securing a measure of accountability of the government officials involved.

In addition, key government officials who were responsible for making the decisions leading to the deaths gave evidence under oath at the arbitration and faced tough cross-examination by the families’ lawyers.

Qedani Mahlangu, the former MEC for health, famously refused to take responsibility and insisted that while it was her decision to cancel the contract with Life Esidimeni, which led to the transfer of patients to unlicensed NGOs, and their deaths, it was actually a case of “collective responsibility”. Mahlangu showed no empathy or remorse during the arbitration and resigned without taking any responsibility. The ANC’s provincial Integrity Commission recommended that Mahlangu be suspended, but that recommendation was ignored and for a time she retained her leadership role in the ANC.

Dr Selebano, who was the head of Gauteng’s health department, admitted that he and other officials failed in their responsibility to protect the vulnerable people in their care. He later resigned and faced a disciplinary hearing held by the Health Professions Council of South Africa earlier in 2021.

Dr Manamela, who was the director of mental health in the province, evaded responsibility during the arbitration hearings. However, witnesses testified that she had played a very hands-on role in the transfer of the patients and that she knew that the NGOs were unlicensed.

After the arbitration concluded, the National Prosecuting Authority conducted investigations into the Life Esidimeni deaths. However, in 2019, the NPA announced that there was insufficient evidence to proceed to prosecution in the deaths of the 144 patients. Without sufficient evidence to prove causation in respect of the deaths and to link the conduct of specific government officials to the eventual deaths, the NPA decided to launch a joint inquest into the deaths related to the Life Esidimeni tragedy.

The inquest has now been set down in the High Court in Pretoria in front of Judge Teffo on 19 July 2021 and is expected to go on for about 30 days. The hearing is open to the public.

The evidence leader will lead witnesses and place evidence before the court, including the record of the arbitration proceedings, which includes the testimony of national and provincial government officials, a South African Police Service witness, owners of the NGOs where the patients died, as well as the family members of those who died.

SECTION27 will represent the bereaved families and counsel will cross-examine witnesses on behalf of the families to ensure that all the relevant information is placed before the judge. This inquest provides another opportunity for lasting justice. It will also likely be traumatic for the families as they relive the details of their loved ones’ tortured deaths – indeed, they may learn new horrifying details along the way.

The road to justice is long and tortured. DM/MC