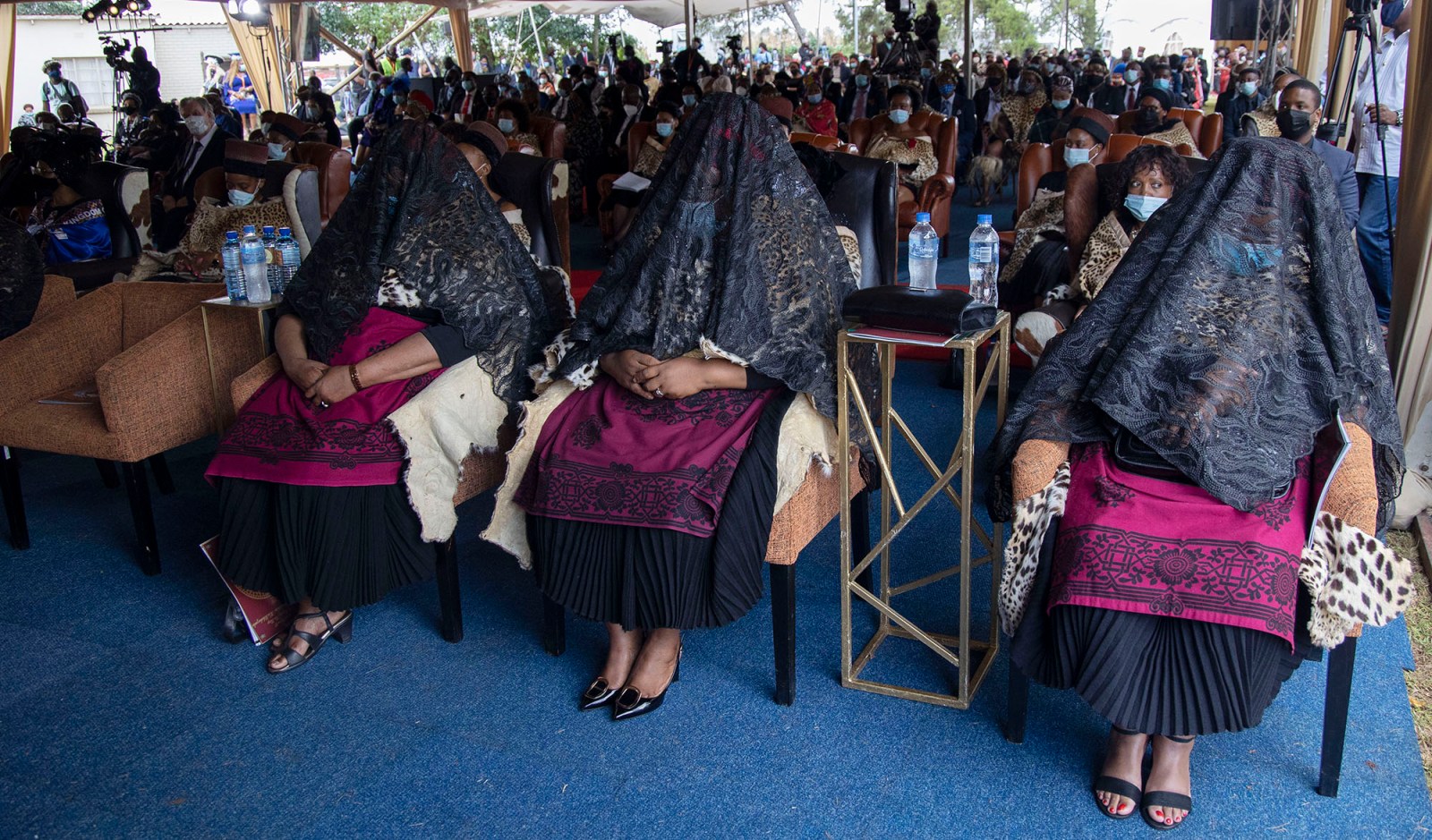 The king's wives grieve during the memorial for the Zulu monarch, King Goodwill Zwelithini at the KwaKhethomthandayo Royal Palace in Nongoma on 18 March 2021. King Zwelithini died in hospital on 12 March 2021 at the age of 72. EPA-EFE / AFP Pool / Phill Magakoe)

Two court applications are causing ructions in the Zulu royal family and intensifying the battle for the throne.

Less than a week after the death of Queen Regent Mantfombi Shiyiwe Dlamini Zulu, tensions have erupted in the Zulu royal family.

At the centre are Zwelithini’s eldest wife, Queen Sibongile Dlamini and two of his daughters, princesses Ntandoyenkosi Zulu and Ntombizosuthu Zulu-Duma (Dlamini’s children).

In the first matter, Dlamini is laying claim to 50% of Zwelithini’s estate worth more than R71-million and including the Ingonyama Trust, of which the king was the sole trustee.

The pair married under civil law in 1969 and therefore in community of property. This was before Zwelithini was crowned, as custom dictated that an unmarried male could not assume the throne.

In her founding affidavit, Dlamini contends that she is the only legitimate wife of the king as marriage under civil law prohibits polygamous relationships.

Attorney Charlene May from the Women’s Legal Centre told Daily Maverick: “The Marriages Act does not allow for bigamy/polygamous marriages. You can therefore not take any additional spouses should you be married under this legislation. There would need to be a formal divorce before there can be a marriage with a third party.”

Dlamini was one of Zwelithini’s six wives.

“There is a strong possibility that the subsequent marriages may be found by a court to be void, because… if the marriage was under the Marriages Act then it would not have allowed for any subsequent marriages to be legally entered into — regardless of whether those marriages were in terms of custom,” said May.

Dlamini approached the courts for an interdict to stop the queen regent’s appointment as interim leader of the Zulu nation as “only persons who qualify are entitled to be identified or appointed as regent or recognised as successor to the throne”.

Mantfombi Dlamini Zulu was appointed as queen regent in accordance with the king’s will.

The authenticity of the will, however, has been called into question.

In a separate matter, princesses Zulu and Zulu-Duma have approached the courts to have the execution of Zwelithini’s will suspended until its authenticity has been determined. The pair are claiming the will was forged after a handwriting expert determined that the signatures in the document differed.

This again brings into dispute the appointment of the late queen as regent.

Prime minister to the Zulu royal family, Mangosuthu Buthelezi, said in a recent statement that there would be “no leadership vacuum in the Zulu nation”.

A senior lecturer in the School of Arts and Culture at the University of KwaZulu-Natal and Zulu cultural expert, Dr Gugu Mazibuko, said issues of succession are kept secret in the royal family, but historically there is no blueprint regarding who can become ruler.

“There is nothing that has been recorded. No manual or regulation or rule or policy on succession. It has been different with each and every monarch.”

She explained that although it was a requirement for Zwelithini to marry before assuming the throne, King Shaka, the founder of the Zulu nation, was not married.

“Culture is dynamic,” she said.

Cultural expert and founder of the Umsamo Institute, Dr Velaphi Mkhize, said the dispute over the legitimacy of marriages showed a “clash of two worlds” where historically, civil marriage was not a factor in Zulu culture.

“The first world is that the mother of the king is the one that had to be paid lobola by the nation, which was Mantfombi back then. On the other hand, Sibongile is actually saying, ‘But I was actually married in a perfect civil marriage,’ ” he said.

“The courts will definitely face a problem here where the courts will say, ‘Look, I think you guys must go and discuss and resolve this on your own.’ ”

The queen regent, who died on 29 March at a Johannesburg hospital, will be laid to rest in a private burial in the early hours of Thursday morning — similar to the planting of Zwelithini.

Buthelezi said the queen regent’s body would be transported from Johannesburg to her KwaKhangelamankengane royal palace in Nongoma, KwaZulu-Natal.

“A memorial service will be held on Friday at KwaKhangelamankengane Palace, which will be presided over by the Seventh-Day Adventist Church to which Her Majesty belonged. It is expected, however, that His Grace the Archbishop of the Anglican Church will also participate.”

According to reports, President Cyril Ramaphosa has accorded the late queen regent a special provincial official funeral for Friday, though an official announcement has not been made.

The cause of her death has been kept secret by the royal family.

Buthelezi said during a recent interview that the queen regent had been poisoned in 2017, but in a statement on Sunday he assured that this was not the cause of death.

“When I announced Her Majesty the Regent’s passing, I spoke in isiZulu explaining that doctors had not wanted to operate, because of toxins in her liver. This required treatment with antibiotics in the hope of reducing the infection. Toxins are not the same thing as poison.”

He went on to berate the Sunday Independent for publishing a story that inferred the queen had died as a result of poisoning.

“The cause of Her Majesty’s death is yet to be revealed. Her doctors ordered a postmortem, which has been done, and the results will be known in two weeks’ time. I would never speculate, and indeed I did not speculate on the cause of death.” DM