On crop of the world: Cape Town neighbours plant seeds of hope during Covid-19 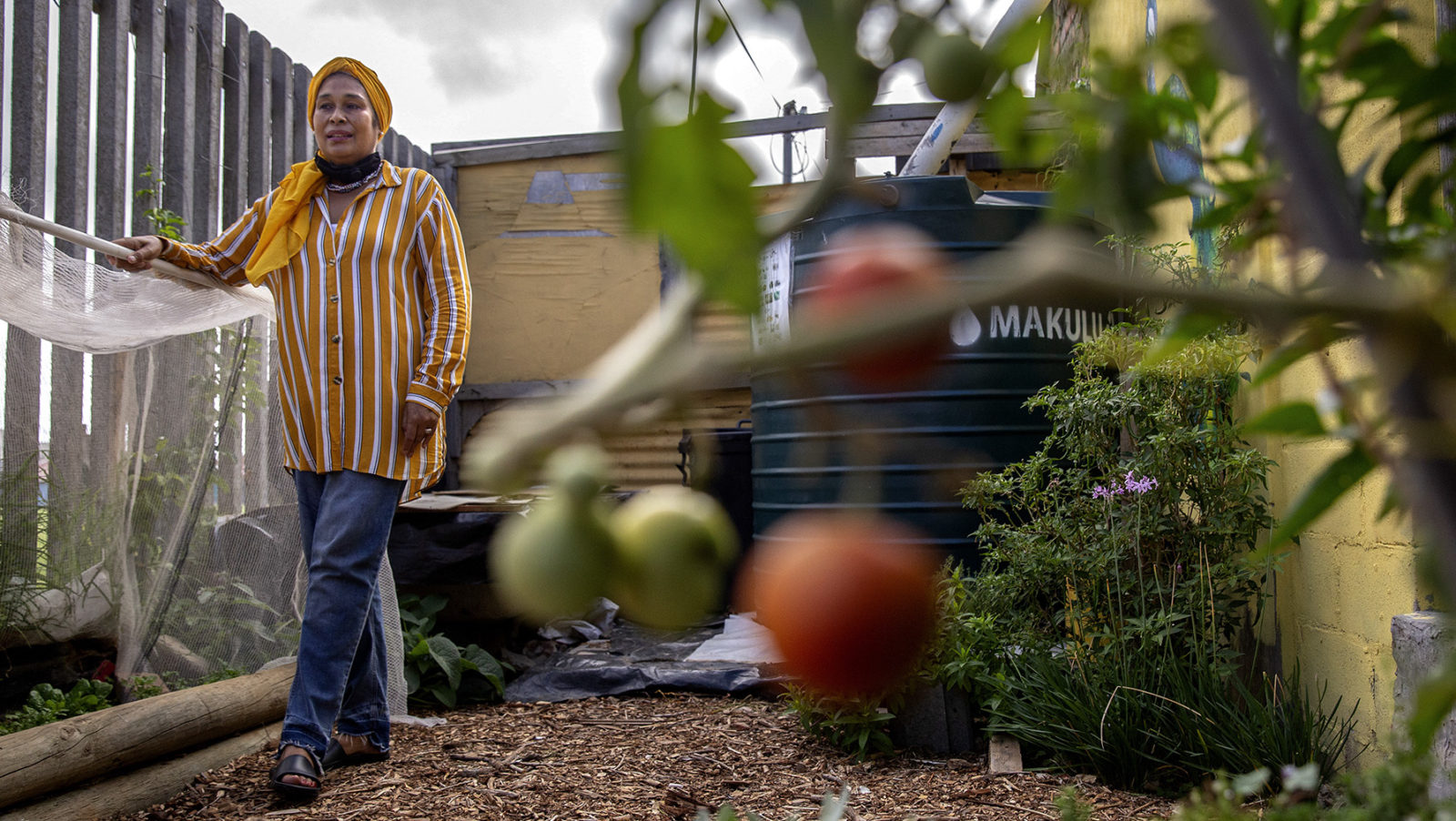 Zainap Salie worked with her neighbours and the Salt River Community Action Network to clean up a lane of dumped rubble behind her home and turned it into an urban garden. (Photo: Ashraf Hendricks)

Zainap Salie says if she had the ear of policymakers she would ask for more public spaces, more trees and a school curriculum that teaches the value of urban gardens. In the meantime, she’s doing her bit to green her community.

Since the onset of the Covid-19 pandemic, Zainap Salie has worried about the lack of green spaces in Cape Town, particularly for children, and how this has affected people’s mental health. Like many of her neighbours, she still lives in the same house she grew up in, in Salt River and where, in 2020, she helped start the Kipling community garden with the local community action group. Zainap works with her neighbours to care for the garden and is effectively coordinating it full time.

The decision to set up a garden in what used to be a lane of dumped rubble happened on 18 July 2020. Zainap says she will never forget that date — all the neighbours realised they could turn the space into a little oasis for the community. They had already started to use it, along with the street itself, as a Covid-safe environment for some of their community action group meetings. That day, the cleaning process began. A month later, the area was already starting to transform, with people bringing small plants and seeds.

The garden runs along the lane behind the homes of Kipling Street, where it borders a sports field owned and managed by the City of Cape Town. In fact, Zainap explains, the city owns half the lane. The other half is private land belonging to residents of Kipling Street. When the idea of the garden came up, the city was happy to have someone else look after the area and quickly gave the nod. As the project grows and new plans develop, there is a proposal to plant trees inside the sports complex. Zainap has sent a formal proposal to the local government for her team to plant and look after this space too.

Zainap is 57 and worked as a university administrator for many years. By the time the pandemic started she had enrolled in a university course to advance her administration skills, but put it on hold. The universe had different plans for her. She would become a gardener within a few months.

Connecting with nature has been a constant in Zainap’s life. One of the activities she has made a strong effort to maintain — except when lockdown didn’t allow anyone to leave the house — is to walk with other women in her neighbourhood along Liesbeek Parkway. She is fond of public spaces that allow her to walk, exercise and “relax”, and cherishes childhood memories of the Liesbeek River. When asked to name her favourite public spaces in Cape Town, what they all have in common is the element of nature — the beach, Green Point Park, Lion’s Head, her own community garden.

Zainap is not only planting seeds in the Kipling garden, she is also cultivating and nurturing relationships in her community, and understands one can’t exist without the other. She often speaks about how the garden has cemented neighbourly bonds and how the project has been able to progress as a result of the trust that has been built in her street over many years. This decades-strong social fabric lays a foundation for a genuine shared space because people are driven by a common goal.

A challenge in any community is to get new people to get involved. But so far, the “newcomers” — a local doctor and a German gardening aficionado, who have both been strongly involved in the project — have been positive additions. However, Zainap is aware of the gentrification forces already at play in her neighbourhood.

She mentions the ongoing development at the River Club, to which she is strongly opposed. But despite what this development means in terms of housing for long-time residents like herself and her neighbours, her biggest concern is the impact it could have on Liesbeek Parkway. She is worried it could disrupt the flora and fauna along the river, and that families might not be able to enjoy a Sunday picnic freely. “We need people to be able to breathe fresh air, especially during Covid,” she says.

Asked how she would describe public space to a young person, Zainap says she would suggest they close their eyes and imagine birds chirping. But undoing generations of destruction and “rewilding” our cities, as supported by natural history filmmaker David Attenborough, is not a simple task. Nevertheless, if Zainap’s dream of urban spaces that allow people to connect with nature is to be realised, then significant work must go not only into greening the spaces themselves but into creating awareness and education to ensure that we and those who come after us have the knowledge and the responsibility to bring green into our public spaces.

The seeds Zainap and her team have planted are both for plants and people. She speaks fondly of the garden, describing every growing vegetable and how it came into being. Zainap is equally passionate about the impact the garden is already having in her community and her ambition to extend it and further benefit people.

She and her neighbours not only share the harvested produce, they have organised the cooking of soup and other meals for neighbours in need. This was inspired by Zainap’s Observatory neighbours who run a feeding scheme from another iconic public space, the Village Green. She passes it on her morning walk and, seeing the queues of people waiting for a meal, believes her garden could one day help alleviate the hunger she has seen grow during the pandemic.

The expansion of urban gardens across Cape Town, partly through community action and environmental groups, gives hope that Zainap’s dream of what a public space can look and sound like will become a broader reality. Although not all communities have access to green spaces, there does seem to be a revival around what nature can offer urban centres. If there’s a silver lining from 2020, community gardens are certainly part of it. As Zainap says: “Our garden is the most wonderful example of public space being used and one of the best things to come out of the pandemic.” DM/MC