Our national liberation icon is in danger: An appeal to save Liliesleaf 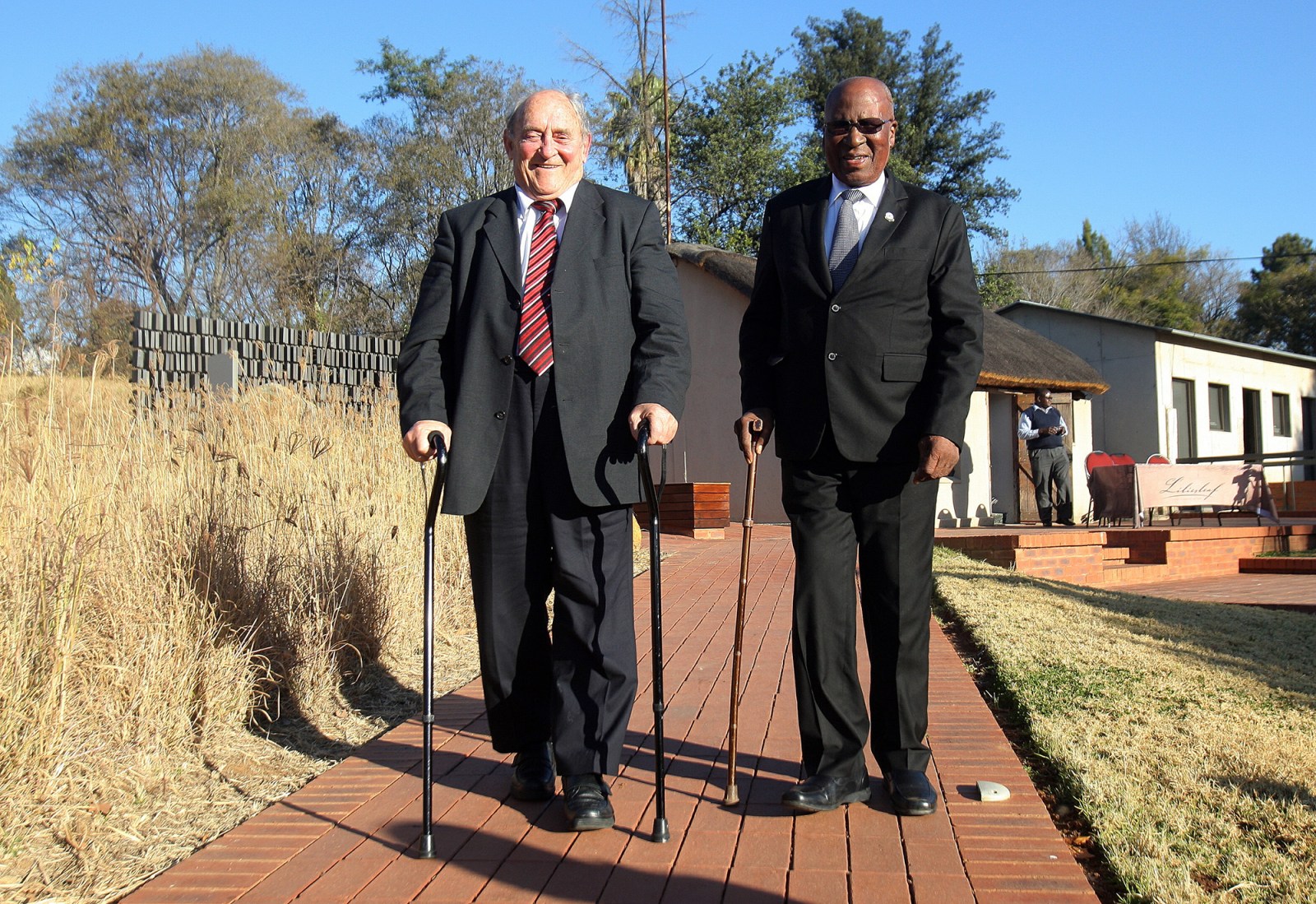 Andrew Mlangeni and Denis Goldberg, two of the three surviving defendants in the Rivonia Trial, on June 10, 2014 at Liliesleaf farm outisde Johannesburg, South Africa. To celebrate the 50th Anniversary of the guilty verdict a limited number of Rivonia Ten Gold medallions, signed by the two men, were auctioned off with all proceeds going to the Liliesleaf trust and the South African Gold Coin Exchange bursary scheme. (Photo by Gallo Images / Sowetan / Veli Nhlapo)

It is crucial that the history of our liberation struggle should never be forgotten. Yet there is a real danger that we are losing our memory. The funding crisis exacerbated by Covid-19 is increasing this danger.

‘Liliesleaf is an icon of the struggle for freedom.’ Denis Goldberg

Liliesleaf Farm was purchased by the Communist Party in August 1961, through Navian (Pty) Ltd, a front company for the party, as the secret meeting place for its leadership. Over time it evolved into the underground headquarters of the High Command of Umkhonto weSizwe, the movement’s military wing, and the leadership of the Congress Alliance.

In July 1963, the apartheid security police, acting on a tip-off, raided the farm and arrested six leaders of the underground liberation movement. At the subsequent Rivonia Trial eight of the 10 trialists, among them Mandela, Govan Mbeki, Walter Sisulu and Ahmed Kathrada, were found guilty of sabotage.

Sites of memory under threat

The solidarity and sacrifice made by the men and women who fought for freedom and justice for all South Africans are most vividly represented and conveyed through our historical sites of memory such as Liliesleaf, Robben Island, Robert Sobukwe House, the District Six Museum, Vilakazi Street, Winnie Madikizela-Mandela’s house in Brandfort and other heritage sites.

However, with few exceptions, today many of these heritage sites have deteriorated and ground to a halt due to a lack of funding. Like Liliesleaf, they are either on life support or are being compelled to close their doors or consider being put up for auction in the hope of securing a wealthy benefactor who will ensure their survival.

As pointed out by Shelagh Gastrow in an article earlier this month that explored remedies for the collapse of our museums and places of memory: “Other heritage sites that are not in the big centres, such as the Cradock Memorial, the Sobukwe grave, the Botshabelo Mission in Mpumalanga and Jan Smuts House in Irene, are generally dilapidated and falling apart.”

This plight can be seen also to be affecting more broadly the field of arts and culture, with institutions such as The Fugard Theatre, Pieter-Dirk Uys’s Evita se Perron and the Market Theatre either being closed or threatened with closure.

However, the demise of the heritage sector has been a long time coming.

For years, many independent institutions have been living from hand to mouth, relying on contributions from donors and/or revenue from entry fees from schools, visitors and tourists. These sources of revenue are not only precarious by their nature, but have been seriously affected by the Covid-19 pandemic.

The pandemic has also exposed the very weak thread on which the sector and its sites have been hanging. While we pay lip service to the value of preserving our heritage sites, lavishly celebrating historic milestones from the liberation struggle, what the sector really needs is a comprehensive, long-term funding programme. Only this will ensure its sustainability, particularly independent sites of memory.

By doing so we will not only be honouring, remembering and celebrating the long and ongoing journey to democracy in South Africa, but contributing to it.

To achieve this there needs to be a fundamental policy paradigm shift and change which will allow the corporate sector to share in funding the heritage sector with the government. Current government policy does not recognise independent heritage sites so they are denied access to much-needed government funding. Also, companies wishing to fund heritage as part of their corporate social responsibility receive no BEE recognition for their spend on heritage sites and institutions – once again robbing the sector of much-needed potential funding.

These adjustments in policy could be the lifeline needed.

Today our country is facing challenges of a kind we have not experienced before, making the need to preserve our heritage and history more important than ever. Yet our liberation history is fading from our collective consciousness and holds little meaning, in particular for younger generations, as shown in a recent survey by the Human Sciences Research Council. It is therefore crucial that we keep the memory of our struggle alive by ensuring our sites of memory and museums are sustainable.

Just like many other heritage sites and sites of memory, Liliesleaf must be given the funding it needs to continue to play its role as a unique and significant site of learning and remembering, described by Mandela on his last visit in 2005 as a place of intellectual, ideological and strategic military discourse and engagement.

Today our new struggle is the struggle against forgetting. DM/MC

Nicholas Wolpe is the Founder and CEO of the Liliesleaf Trust and the son of one of the Rivonia accused, Harold Wolpe.