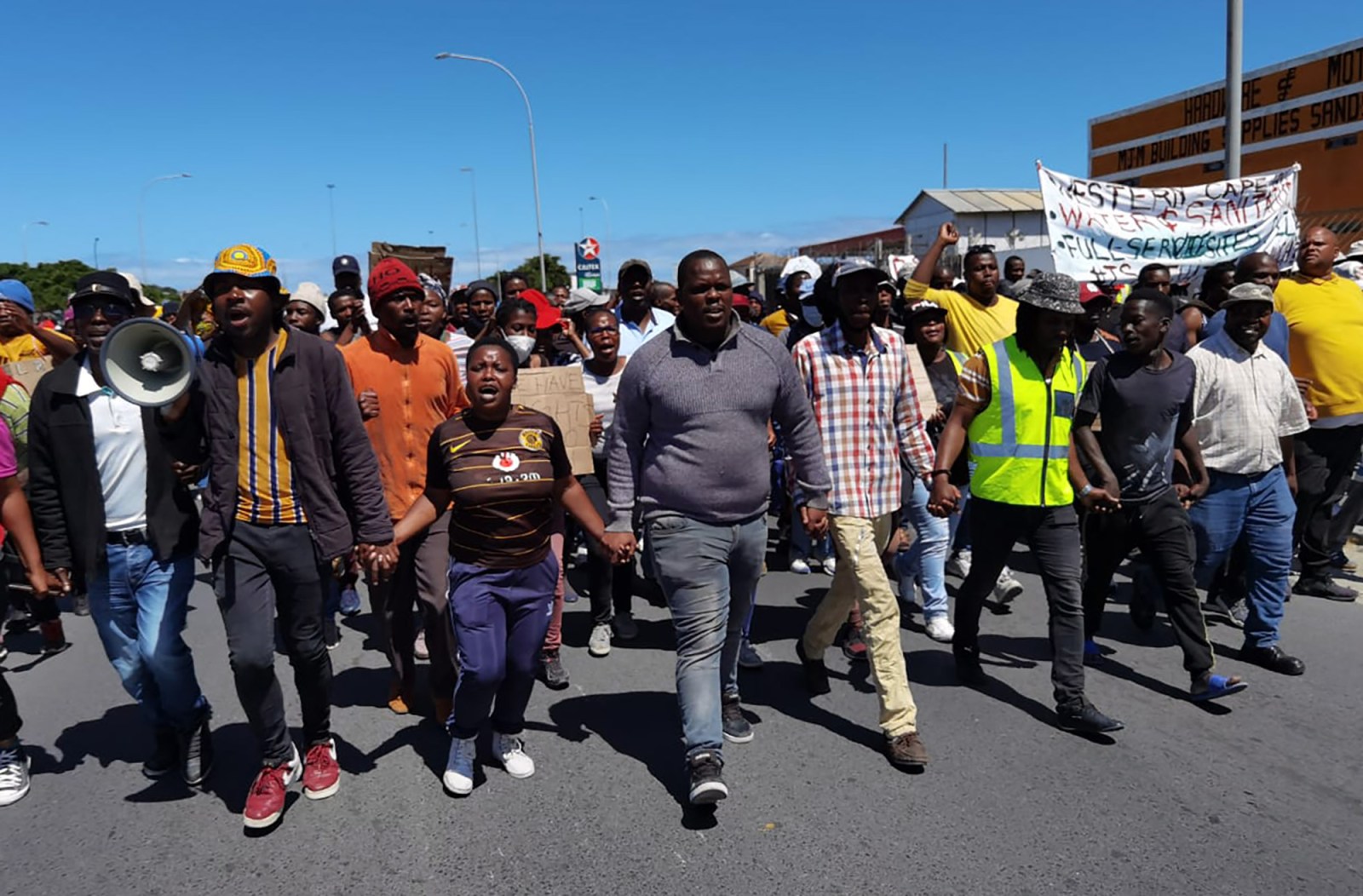 In the midst of the Covid-19 pandemic, a Cape Town protest movement has sprung up to agitate for services at new informal settlements with names like Level 2, Covid 19, Social Distance, Pandemic and Lock Down.

The newly established Intlungu yaseMatyotyombeni Movement (IYM) is behind a recent wave of service delivery protests in Cape Town, which have affected major roads, including the R300, the N2 and Baden Powell Drive, as well as Mew Way and Spine Road in Khayelitsha.

Recent protests in Kraaifontein, Khayelitsha, Belhar, Kuilsriver and Mfuleni have resulted in some people being injured, buses and cars being torched and traffic delays due to the barricading of roads with rubble and burning tyres. Read here.

Co-chairperson of the IYM, Xoliswa Tsholoba, told Daily Maverick that since the last shutdown on 23 March, the IYM has had ongoing meetings with the South African National Civic Organisation (Sanco) and various other stakeholders about the way forward.

Plans to meet the City of Cape Town to discuss the prioritising of basic services including water, toilets and electricity in new informal settlements, had not yet materialised.

The IYM is planning a joint shutdown along with its stakeholders, according to Tsholoba. The planned shutdown, which does not yet have a confirmed date, will not take place in informal settlements, said Tsholoba.

“[The protests] will be outside the townships,” she said, but was unable to provide further details.

The emergence of the movement

The Intlungu yaseMatyotyombeni Movement was established in August last year by residents of 12 new shack settlements which have emerged in the Cape Town metropolitan area since the outbreak of Covid-19, Tsholoba told Daily Maverick.

The names – Level 2, Covid 19, Social Distance, Pandemic and Lock Down – are reminders that the settlements emerged during the Covid-19 state of disaster and subsequent lockdowns. Other new settlements in Cape Town are Thembeni, Sakhile Nathi, Phumlani, Mpolweni, Makhaza, New Dawn, Noxolo Xawuka, Zwelethu, Dubai and Island.

Roughly translated as “the plight of shack dwellers”, the IYM was formed to help people living in newly occupied areas to secure access to basic services, said Tsholoba. Read here.

After being affected by the closing of businesses and the sharp rise in unemployment spurred on by the lockdown, many people began occupying vacant land because of a loss of income.

After losing his job and being unable to pay rent, Gali moved into the Phumlani informal settlement in July 2020. He said the community is yet to get access to clean water, toilets and electricity.

In recent weeks, the IYM disruptive protest tactics have been criticised by some human rights organisations and political parties.

According to News24, MEC for transport and public works Bonginkosi Madikizela has described the IYM protests as “merely politicking and thuggery masked as service delivery protests”.

Madikizela said the possibility that the protests are politically motivated to foment frustration ahead of local elections cannot be ruled out, reported News24.

According to Tsholoba, the IYM is not politically affiliated and is also not associated with the so-called Radical Economic Transformation faction.

The Social Justice Coalition (SJC), a movement advocating for safety, justice and equality in informal settlements, has expressed disapproval of the movement and said it did not “condone the actions demonstrated by the Intlungu yaseMatyotyombeni Movement” on 23 March.

“Protests that involve the inconveniencing, destruction and destabilisation of those living in poor communities is a painful and violent act that people who are already victims of an oppressive system should not have to deal with,” read the statement.

The SJC’s statement came after members of the organisation, alongside several other groups, participated in a peaceful protest calling for access to basic services in informal settlements, on 22 March.

“While it is our constitutional right to protest, it’s important that we do not trample on the rights of others,” the SJC’s head of advocacy and organising, Nkosikhona Swaartbooi, told Daily Maverick.

It is important that protest action does not affect people living in informal settlements’ ability to access public transport systems and prevent them from attending their place of work, said Swaartbooi.

However, the lack of access to water and sanitation is “a gross human rights violation that the City of Cape Town subjects people living in informal areas to”, said Swaartbooi.

Swaartbooi said that over the past year, the SJC has been “approached by several communities” who have requested access to water and sanitation. This is a “constitutional obligation that our government is mandated to do, but fails without shame,” added Swaartbooi.

When asked for the City’s response to the IYM’s recent protests, and what plans there are to assist the residents of these new settlements with access to water, toilets and electricity, Daily Maverick was directed to a statement issued by the City of Cape Town on 23 March.

According to the statement: “The City respects the right of groups to protest, but absolutely condemns violence, criminality, thuggery and the destruction of public property and disruption to residents trying to go about their daily lives.”

A number of newly established communities are demanding basic services, but the City is currently “unable to cater for these unplanned settlements as existing informal settlements are prioritised on the basis of available resources”, read the statement.

This is because the vast majority of these settlements have been established on “unsuitable land or land with great constraints for service delivery”, said the City.

Assessments of the new settlements on unlawfully occupied land are currently being undertaken and will continue across the metro, said the City. However, “it is completely unreasonable to demand immediate services”.

However, the organisation “[believes] that protests that are disruptive should disrupt the status quo of the City of Cape Town and not inconvenience the other vulnerable groupings in society”, said Booi.

The City of Cape Town’s “attitude” towards the protesters and their pleas for access to basic services is “problematic”, said Booi.

According to Booi, the City’s claim that it is unable to provide services to the settlements established on unlawfully occupied land “exposes the ideological orientation of the City of Cape Town that speaks to relegate… [and] criminalise poor people”.

Tsholoba told Daily Maverick that the movement has made numerous attempts to engage with the City on these issues.

The IYM was to meet the City of Cape Town on Tuesday, but the meeting was postponed by the City, according to members of the movement.

According to the City of Cape Town, the meeting with IYM had been arranged by the City’s public participation unit and was scheduled for 6 April, “but was postponed as information was still being collated from relevant departments in order to provide holistic feedback to the concerns raised during recent protests”.

There were no other meetings that had been scheduled to take place last week, the City of Cape Town told Daily Maverick. However, there was a request from members of the IYM for a meeting on Friday, 2 April, but because it was a public holiday it was postponed to Tuesday this week, said the City. DM