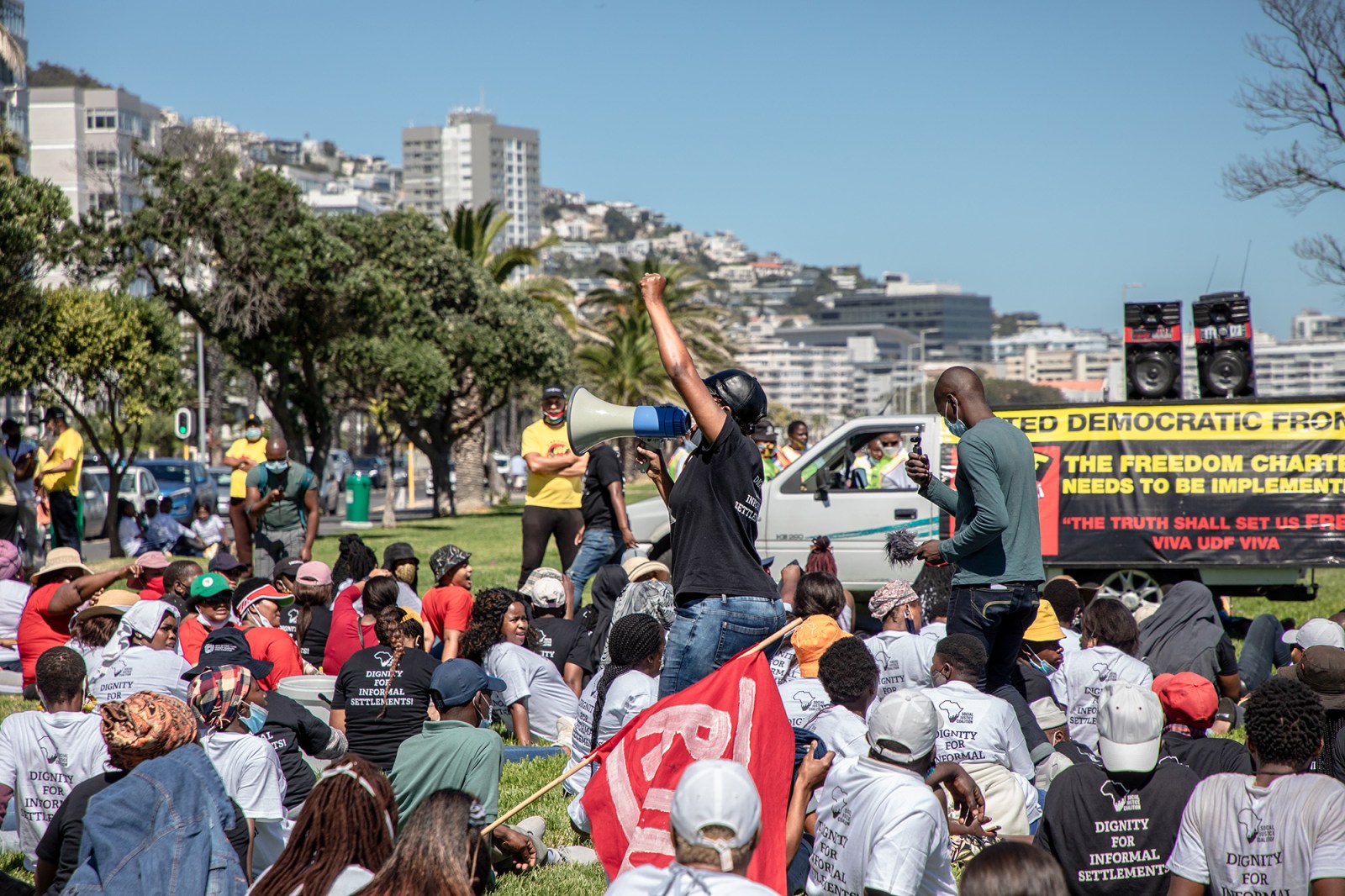 The Social Justice Coalition at a protest highlighting the lack of access to basic services on the Sea Point Promenade on 22 March 2021. (Photo: Victoria O’Regan)

Residents from 23 communities marched on the Sea Point Promenade on Monday, calling for the City of Cape Town to prioritise housing and access to water and sanitation in informal settlements.

On Monday, 22 March, residents from 23 communities, alongside members of the Social Justice Coalition (SJC) and several other organisations, protested against the lack of access to services such as housing, water and sanitation and public lighting in Cape Town’s informal settlements.

About 250 protesters from communities including Langa, Kraaifontein, Delft, Mfuleni and eThembeni informal settlement in Khayelitsha, gathered on the Sea Point Promenade to voice their frustrations at the city’s failure to provide fundamental services.

The protest was organised by the SJC. Other organisations, including the Housing Assembly, Ndifuna Ukwazi and the United Democratic Front, participated in the action.

Press Statement: Basic Services = Human Rights! In observation of #HumanRightsDay2021 , and in support of #WorldWaterDay2021, communities from all around Cape Town will be joining in protest against the @CityofCT for depriving us of our basic human rights https://t.co/M2O9kqtNtz

Protesters said repeated calls for the City of Cape Town to prioritise adequate housing and other services had been fruitless, and engagements with city officials “aren’t translating into action”.

“It means nothing to us to celebrate Human Rights Day when people are going to go back to their homes and continually experience the violation of their rights,” the director of the SJC, Mandisa Dyantyi, told Daily Maverick.

Living in an informal settlement without access to services like toilets, clean water, public lighting and electricity is a violation of human rights, said Dyantyi.

“To say as South [Africans that] we are celebrating Human Rights Day, is to insult these residents that are experiencing human rights violations on a daily basis,” she said.

One Khayelitsha resident who was present at the protest told Daily Maverick that she doesn’t feel as though she “belongs in this city”.

“I am here for my rights,” said Khayelitsha resident Nompumelelo Booi.

Booi, who lives in a shack with nine other family members, said she has lived in the informal settlement since 1985. Her home has “no toilet [and] no water”.

Since October last year, the SJC has had consultations with leaders from more than 45 communities, most of which developed as a result of the Covid-19 pandemic and subsequent lockdown. Some of the communities have existed for years without basic services, according to Dyantyi and a statement by the SJC on Monday.

Leaders, who vocalised issues of not having access to water and sanitation, also raised additional concerns which stem from living in informal settlements, such as gender-based violence, femicide and high crime rates, said Dyantyi.

“The link between rape and assault experienced by women and a lack of access to basic services is one that is grievously ignored by the City of Cape Town and has led to the loss and pain of many women who live in informal settlements,” said the SJC’s statement.

“We know of so many stories of young women and children that have died for merely trying to access a public toilet. If that doesn’t move us to action as a country then who are we – what are we standing for?”

The aim of the protest was to make the broader public more aware of the issues people living in informal areas confront on a daily basis, said Dyantyi.

People tend to “turn a blind eye” to issues that make them uncomfortable, even though they “know that it may be unjust,” she said.

But, “when you expose a wound to people they become uncomfortable and sometimes [they] are moved to action”.

Dyantyi said members of the SJC had engaged “to an extent” with officials of the City of Cape Town at ward-council level and sub-council level.

However, the engagements “aren’t translating to action”. The SJC wants a “commitment from the city” with a date and a plan of action to tackle these issues.

In response to Monday’s action, the City’s Mayoral Committee Member for Water and Waste, Xanthea Limberg, told Daily Maverick: “The city continues to provide basic water and sanitation services, such as toilets and standpipes for water, to informal settlements across Cape Town including Khayelitsha, where possible.”

About 3,500 taps and 17,724 toilets have been provided in Khayelitsha, said Limberg.

In instances where the city is unable to install full-flush toilets, “residents are provided with alternative sanitation solutions”, including container toilets, portable toilets and chemical toilets.

The “city will continue to work closely with ward councillors and informal settlement leadership structures to unlock additional opportunities for provision of basic water and sanitation where it is possible to do so”.

Calls for the city to provide residents of informal settlements with adequate housing have been “coming for a very long time,” said Kashiefa Achmat of the Housing Assembly.

Read in Daily Maverick: Activists call for City of Cape Town to prioritise adequate housing for the poor and homeless

“We feel that water and sanitation and housing are basic needs, but the city is not providing any houses to new occupations,” she said.

According to the City of Cape Town, a number of newly established communities are demanding basic services, but the city is currently “unable to cater for these unplanned settlements as existing informal settlements are prioritised on the basis of available resources”. DM