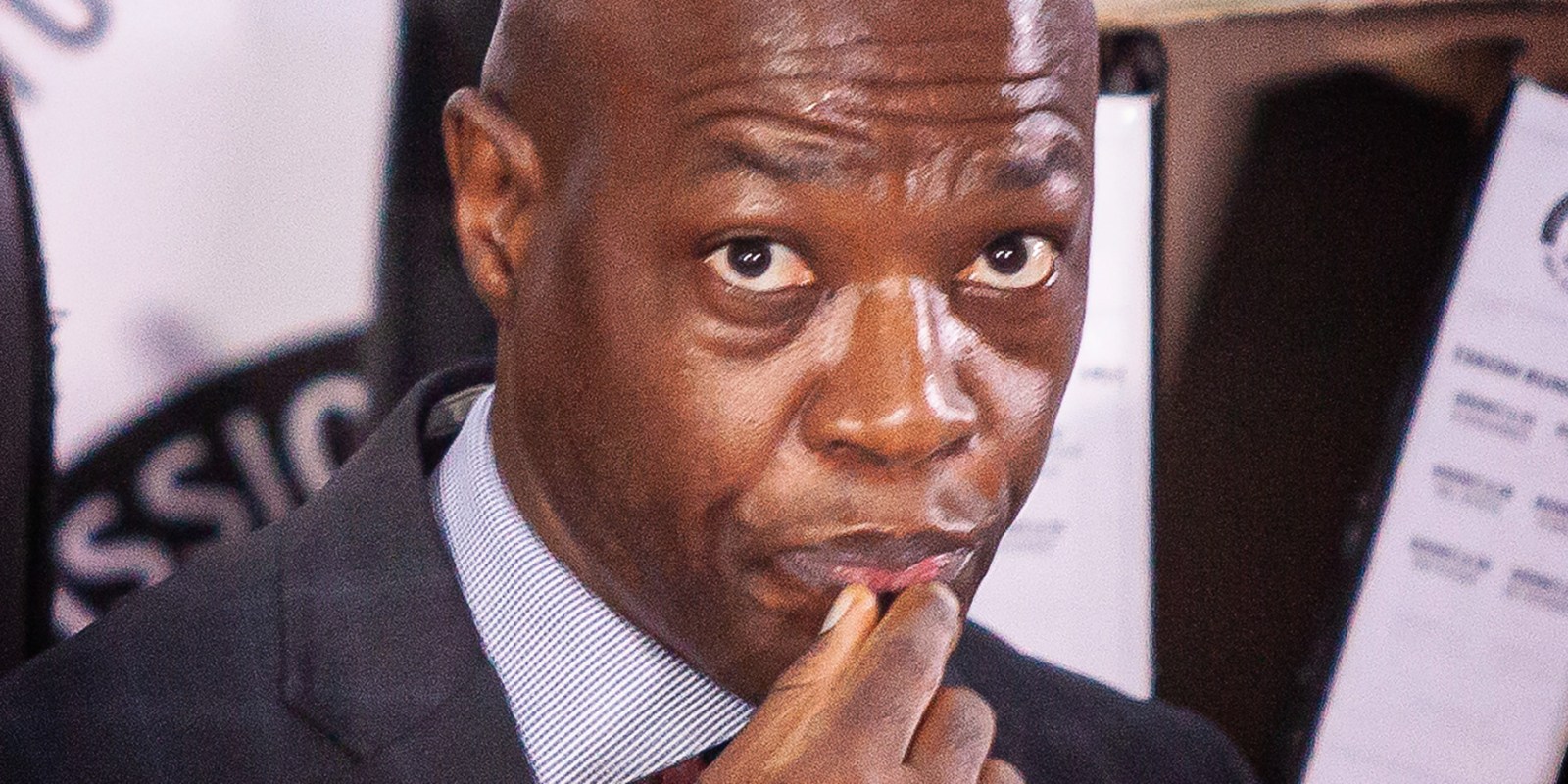 Matshela Koko, former group chief executive officer at Eskom, took a dig at President Cyril Ramaphosa at the beginning of his own testimony at the Zondo Commission on Monday.

Former Eskom interim group chief executive officer Matshela Koko began his testimony at the Zondo commission on Monday by taking a not so subtle swipe at President Cyril Ramaphosa and his upcoming appearance before the commission.

Koko introduced the topic of Ramaphosa’s appearance to commission chairperson, deputy chief justice Raymond Zondo, by saying that he had “a question of clarity”, within the first minutes of the session starting.

“I just want to find out if Mr Ramaphosa has been served with a [Rule] 3.3 notice like all of us who have been served, because I really want to know why did Mr Ramaphosa interfere in the affairs of Eskom by instructing the board of Eskom that was yet to meet, to dismiss me.”

Koko made the allegations about Ramaphosa’s alleged interference at the embattled state-owned entity during his 3 December 2020 testimony before the commission.

Koko said at the time that he had received a phone call in late January 2018 from the acting deputy director-general in the Department of Public Enterprises, Makgola Makololo, telling him that then deputy president Ramaphosa had told the new Eskom board to dismiss him. Koko was on suspension at the time.

His dismissal was confirmed in the same phone call by Ben Martins, said Koko, who was then the deputy minister of public enterprises.

The president is set to testify before the commission over four days in April. He will give testimony on 22 and 23 April on behalf of the African National Congress, while 28 and 29 April will be set aside for his testimony as president and former deputy president of the country.

The commission’s Rule 3.3 notice makes provision for an individual who has been implicated via witness testimony.

Ramaphosa was deputy president of the ANC and country during the so-called State Capture years, when billions of rands were looted from state coffers, for the alleged benefit of the Gupta family, myriad businesses and high-ranking politicians and officials.

He said he would “not rest peacefully” until he knew why Ramaphosa had “interfered” with the new Eskom board by seeking his dismissal.

“I look forward to Mr Ramaphosa coming here. I hope you have served him with 3.3 notices,” said Koko.

Zondo replied: “I too am interested to hear what the president has to say about your evidence in that regard. He certainly should be questioned on that.”

Evidence leader advocate Pule Seleka confirmed that part of Koko’s statement was given to Ramaphosa “when we provided him with an equivalent of a Rule 3.3, which is a request for information”.

Prior to Ramaphosa taking up the position of deputy president after the 2014 national general elections, he had been a major shareholder in the Optimum coal mine.

In March 2012, a JSE news service released a notice that a consortium consisting of Glencore subsidiary Piruto BV and Lexshell 849, owned by Ramaphosa and partially funded by his flagship business Shanduka Group, wanted to buy Optimum Coal.

According to news reports, the consortium secured two thirds of the business for a reported price of $780-million.

Ramaphosa’s exact stake in the deal has never been disclosed, but it is believed to have been substantial, with Ramaphosa likely to have had the lion’s share of the 26% BEE requirement for miners operating in South Africa.

Koko’s explanations were similar to those made by former Eskom chief financial officer Anoj Singh, during his testimony at the commission earlier in March. Singh had said that the payment made to Trillian would have to be explained by the finance team (which he headed) or the procurement team.

It is understood that Ramaphosa’s Shanduka Group, in which he had no direct involvement after becoming deputy president in 2014, was one of the losers when Optimum Coal was sold by Glencore to the Guptas and Duduzane Zuma.

Koko also used his Monday testimony to “explain” to Zondo how Eskom policy on contracts worked.

The commission has heard testimony that in its dealings with global management consultancy firm McKinsey, payments had been made without contracts being signed or being signed late.

This included the R30.6-million paid to Trillian, the BEE partner of McKinsey, for the work it did on Eskom’s corporate plan in April 2016. The majority shareholder of Trillian was Gupta ally Salim Essa. The contract was signed a month after Trillian had received payment.

Koko told Zondo that at all times he “operated within the framework of Eskom and I made prudent decisions that are in the best interest of Eskom”.

He said that Eskom preferred that there were contracts in place, and concluded, before work started, but that a letter of acceptance was also legally binding.

Concerning the McKinsey corporate plan project, he said that the “signature on the letter of notification and acceptance by McKinsey on 29 September 2015 put the contract in place, whether the contract was signed or not. That is the framework of Eskom”.

He said the Eskom board approved the contract on a fixed-term award to McKinsey for R102-million, for the business plan.

“In terms of Eskom’s framework… you have to notify the supplier whose contract has been approved. That notification is binding on Eskom. But at that point, the contract is not signed.

“There are many contracts in Eskom that I know of today, that have not been signed, but the letter of award has been awarded. What you cannot do is pay a supplier without a signed contract.”

Later in proceedings, Koko said that because Eskom’s processes were not understood, he was accused of corruption and State Capture; he called this a “Kokohunt”.

Koko’s explanations were similar to those made by former Eskom chief financial officer Anoj Singh, during his testimony at the commission earlier in March. Singh had said that the payment made to Trillian would have to be explained by the finance team (which he headed) or the procurement team.

Singh told Zondo that he did not sign every payment that was processed at Eskom, thus the finance and procurement teams would have to “provide the details”.

Koko told Zondo that the focus of the commission should not be on “Koko or Singh”, but on if Eskom’s processes were followed.

Eskom made payments totalling about R600-million to Trillian, based on its claims that it was a subcontractor to McKinsey.

McKinsey and Trillian were paid R1.6-billion for their work at Eskom.

In 2017, McKinsey said it would pay back R1-billion in consulting fees it earned from Eskom. That money was paid, with interest, in 2018.

In October 2019, Trillian was ordered by the North Gauteng High Court to repay Eskom R600-million, which it failed to do. Eskom has resorted to trying to have the company liquidated to recoup the money. DM