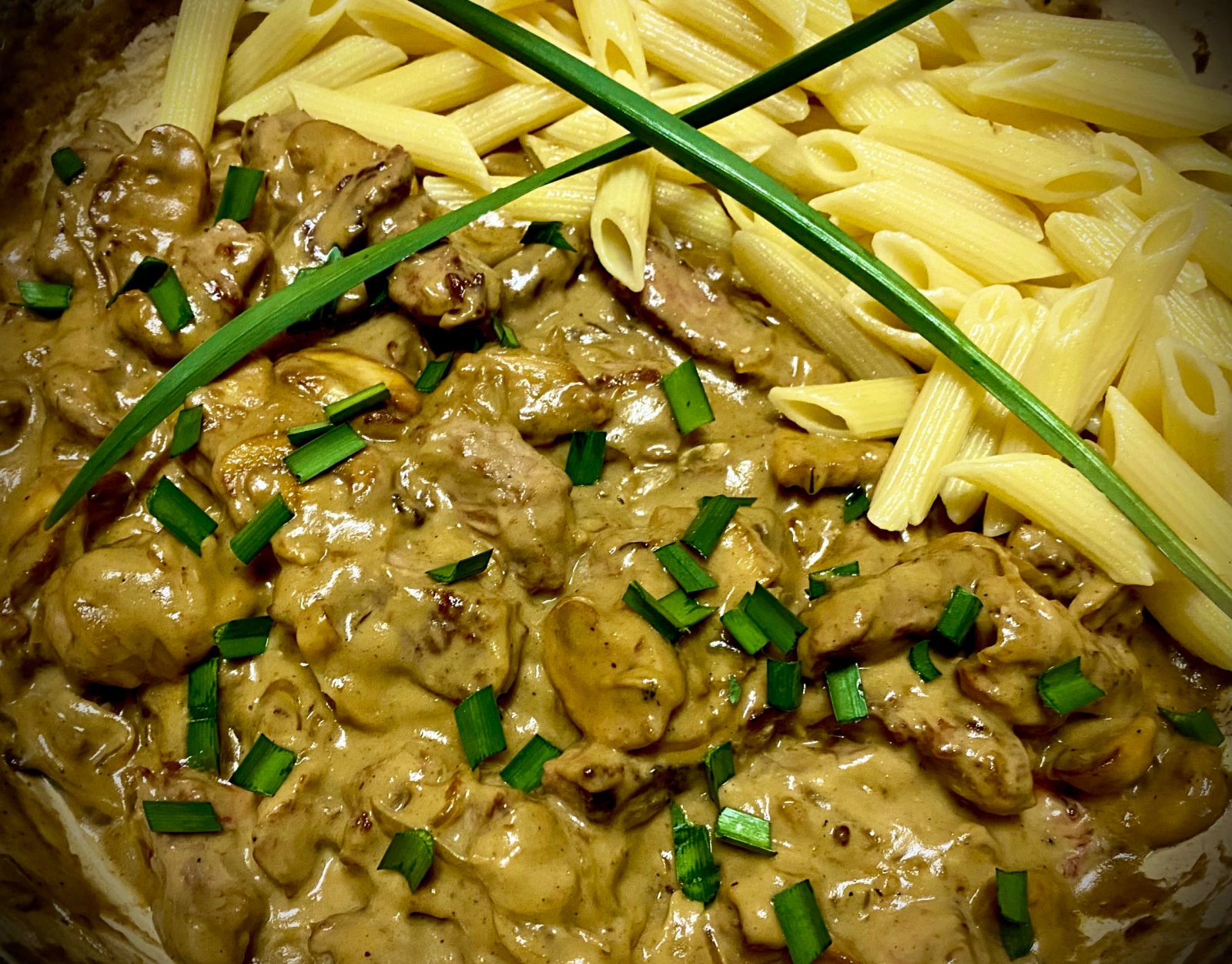 Sometimes the simplicity of a classic dish belies its beauty. Beef Stroganoff is more than just beef, sour cream and mustard. In fact, it’s the beef stock that really makes it sing.

This dish has its origins in Russia and the Stroganov family, the surname having been anglicised over time in the West. Though it is widely believed that the Stroganovs had French chefs working for them who invented the dish, it is more likely to be a refinement of an old Russian recipe. Either way, it calls for a tender cut of beef, mushrooms, sour cream, mustard and, not least, beef stock. Today, Dijon mustard is often called for.

The Hildagonda Duckitt of Russian cuisine, Elena Molokhovets, published a recipe in her book A Gift to Young Housewives in 1871 which called for marinating beef cubes in allspice and salt and then pan-frying them in butter. The resultant sauce, says Wikipedia, was “a simple roux mixed with prepared mustard and broth, and finished with a small amount of sour cream: no onions, no mushrooms and no alcohol”. Today, we define it as a dish of strips (not cubes) of beef with mushrooms, onions, mustard and beef stock.

Larousse Gastronomique got it wrong at first. Cites Wikipedia: “In 1891, the French chef Charles Brière, who was working in Saint Petersburg, submitted a recipe for beef Stroganoff to a competition sponsored by the French magazine L’Art culinaire. This led Larousse Gastronomique to assume that he was the inventor of this dish, but both the recipe and the name existed before then.”

Later recipes call for ketchup to be added. A 1938 version in Larousse calls for beef strips (which has stuck since then) “and onions, with either mustard or tomato sauce optional”.

The Beef Stroganoff we know, then, has been adapted over time and bears little resemblance to whatever dish was placed before the Stroganov family in Russia once upon a time. If it ever was. Nevertheless, the recipe we know today is worth holding on to, and I believe that the dish is at its very best if you start with the best beef stock that you can muster.

Most of us shy off making our own stocks, taking the easy route of buying a store-bought product, and some of them are fairly good. But none will quite give you the flavour punch of one you’ve made yourself by starting with roasting lots of bones. Come on, you can do it. It’s only stock. If you really have to use a store-bought one, choose a liquid beef stock or those superb fonds produced under the Nomu brand. Others such as Knorr and Ina Paarman are second-best, but a hard, overly salty stock cube is not gonna cut it.

I recommend doing what I did this week: ask your butcher for a couple of well marbled, thick steaks on the bone, such as ribeye or sirloin. You’ll need the fat and the bones for your stock (the fat gets skimmed off after cooking, but adds greatly to the flavour, so don’t discard it before making your stock). But also buy whatever other beef bones your butcher has to hand, especially ones that contain bone marrow or, as my local butcher calls it, “jelly”. I spent 15 bucks on a bag of miscellaneous beef bones that my butcher had to hand.

To make your stock: Put all the bones in a large, deep oven dish. Add 3 carrots, 3 sticks of celery, and 2 onions, all roughly chopped. Add 2 bashed garlic cloves, a few thyme sprigs, 4 bay leaves, and put them in a preheated 220℃ or 240℃ oven to roast for at least an hour. You want the aromas to beckon you from elsewhere in the house.

Transfer the contents (everything) to a large cast iron pot or other suitable stock pot. Cover with cold water, bring to a boil while covered, then remove the lid to cook for 3 to 4 hours or longer. If the liquid gets too low while you still want to cook it further (because the longer you cook, the more intense the flavour), top it up with water, bring it back to the boil and keep on cooking. You want the liquid stock left over to be about a fifth of the quantity of water you first put in.

Put a big bowl in the sink and put a colander on top of it. Pour the contents of the stock pot into the colander carefully and collect the juices in the bowl below. If there’s still plenty of life in the bones and other goodies in the colander, put them back in the pot, add more water, boil them up, and get some more lovely intensity out of it as the liquid evaporates once more.

But the stock is not made yet. Put the strained stock through a fine sieve into a large, deep saucepan and reduce on the stove until it has a pleasing thickness, richness and deep brown colour. Now you have the stock you need for your Stroganoff. Here’s what the completed beef stock should look like, followed by the Beef Stroganoff recipe…

300 ml rich beef stock made from the beef bones (see how to do it, above)

Cut the “eye” of the steak (i.e. the meaty part) away, and trim any remaining fat and sinew. Place the steak on a board and roll it out with a rolling pin, as you would dough. The picture below shows the difference this procedure makes. Use the bone and fat for your stock.

Cut the steak into thin strips, season with salt and set aside.

Heat oil in a cast iron pan until very hot, then quickly sear the meat strips in batches, for less than half a minute on each side, turning once; remove immediately, then fry the rest a few pieces at a time. Tongs work best for turning them and removing them once cooked. Don’t be tempted to cook them for more than about 25 seconds on each side.

Add 2 Tbsp butter to the pan and add sliced button mushrooms, not too thin as they will reduce in size while cooking. When they’re nicely browned, remove and keep aside. Add 1 large thinly sliced onion. Cook, stirring, until softened. Return the mushrooms to the pan. Add 2 Tbsp plain flour and cook, stirring, until nicely browned, just a minute or two, stirring, then add 300 ml beef stock, stir, and whisk in 1 Tbsp of Dijon mustard and then 200 ml sour cream.

Season with pepper, taste, and salt more if needed, but remember that it is still going to reduce down a little which will strengthen the saltiness. Simmer for 4 or 5 minutes while the broth thickens. Small pasta pieces such as penne make a good accompaniment. Finally, scatter a few chopped chives over. DM/TGIFood