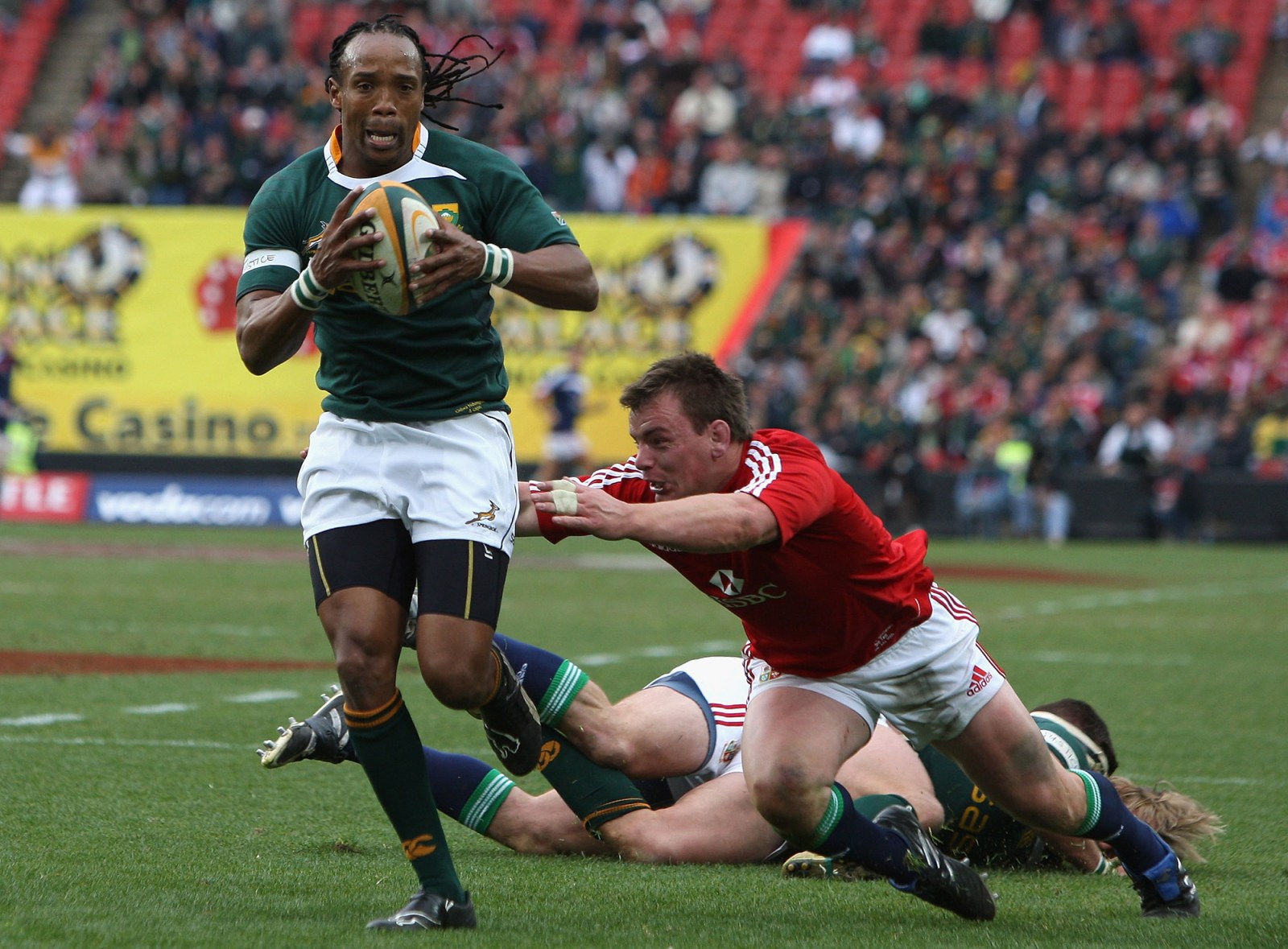 Odwa Ndungane of South Africa is tackled by Matthew Rees during the Third Test match between South African and the British and Irish Lions at Ellis Park Stadium on July 4, 2009 in Johannesburg, South Africa. (Photo by David Rogers / Getty Images)

The decision to finally commit to the British & Irish Lions 2021 series against the Springboks taking place in South Africa was surprising because of the hurdles that still need to be cleared. But it was also a line in the sand moment.

The overriding sense of SA Rugby and the British & Irish Lions’ agreement to only consider South Africa as the host venue for the 2021 tour, is that it’s the best on a bad list of options.

It was the least problematic of an imperfect set of scenarios in a world thrown off its axis by the global Covid-19 pandemic. The choice was the equivalent of undergoing root canal without anaesthetic versus having your teeth smashed to fragments in a crunching tackle from Duane Vermeulen.

Every choice and eventual decision will come with risks and few rewards, and each one of those calls will be open to intense scrutiny in years to come when the pandemic has passed.

Until last week, the United Kingdom was favoured to host the tour with limited crowds inside stadiums. But the onset of the third wave of the pandemic, failure to secure financial support from the UK government and the increasingly slim chance of fans in stadiums in the UK, shifted the goalposts back towards South Africa.

The same government that chose to allow thousands of jobs and billions of rands in revenue to disappear by banning the tobacco and liquor industries from selling products during some of the hardest lockdowns of the pandemic.

A rugby tour, no matter how significant and special, is unlikely to move Nkosazana Dlamini-Zuma and her Covid command council to fling open the turnstiles so that rugby can make some money.

“There are serious financial implications for SA Rugby, should the event take place without any supporters in attendance, and we cannot ignore that in our considerations,” Alexander said.

“But we are determined that the eventual outcome will deliver the best occasion and experience for players, supporters and our commercial partners.”

This will likely be a tour without fans, played in cavernous, empty stadiums as much of sport has been played in the past 12 months. It’s no one’s fault and it’s not through a lack of effort from hard-working people at SA Rugby, the Lions, sponsors and broadcasters. It’s simply the reality of a situation beyond anyone’s control, coupled with bad timing.

Projections were that the Lions tour in a “normal year” would add R6.6-billion to South Africa’s GDP. That figure will drop by almost 100% without fans, but according to sources, SA Tourism is behind the tour because it will send out a strong message that the country is open for business.

Making the most of the situation

Lions tours to South Africa only come round every 12 years and this one happens to fall in the window of a once-in-a-century pandemic. It’s simply a case of grin and make the most of it.

Cancelling is not an option because there is still money to be made from the broadcast rights. Something is better than nothing. In the case of SA Rugby, that “something” could still amount to R500-million in broadcast revenue.

Australia did offer to host the series, but that option was quickly dismissed with thanks from both SA Rugby and the Lions board.

Had the tour gone to the UK, tour title sponsor Castle Lager might have pulled out because they do not sell their beer in Britain. Furthermore, pay channel Sky Sports are believed to have favoured a series in South Africa.

“I can confirm that the board’s intended position is for the tour to go ahead as scheduled in South Africa in 2021,” said Jason Leonard, the British and Irish Lion chairman.

“We acknowledge that there is a significant amount of work still to be undertaken to deliver a robust Covid-19 countermeasure plan to ensure a successful, safe and uninterrupted Tour. SA Rugby will have our full support to help implement this plan.”

A Lions tour in South Africa has always been the preferred option for the Lions organisation, which is philosophically attuned to being the touring team.

“We appreciate the Lions’ faith and share their desire to see a safe and successful tour,” said Alexander. “We have been in regular contact with our government to make that a reality against the backdrop of the pandemic and its predicted progression over the coming months.”

The Lions ethos has been built on touring the southern hemisphere, but the 2021 version will almost certainly be deprived of colour from travelling British and Irish fans, and indeed from local fans. It will be a television-only tour.

“Every British and Irish player dreams of wearing the famous red jersey, and players from the southern hemisphere aspire to be part of a Lions series,” Leonard said.

“We owe it to the current players vying for a place in both squads to ensure they can become part of Lions history. We are very much looking forward to taking on South Africa for what promises to be a highly competitive series against the reigning world champions.”

Both the Springboks and the Lions squads are expected to be accommodated in one, or possibly two bio-bubbles and travel to venues for games outside of those centres.

The details of the plan are still being worked out while the original eight-match schedule is also subject to change.

One scenario that won’t change is that there will be three Tests. Other games and opponents might vary from the original schedule, but the Boks versus the Lions on three consecutive Saturdays in late July and early August remains fixed.

“As hosts and “owners” of the Castle Lager Lions Series, no one has been more affected or more challenged by the current circumstances than SA Rugby,” said Alexander.

“However, with the support of our government and good planning we can navigate the pandemic to nonetheless create a most memorable event for players, fans and partners.”

The 2021 Lions series will certainly be memorable, but will it be for the right reasons? DM