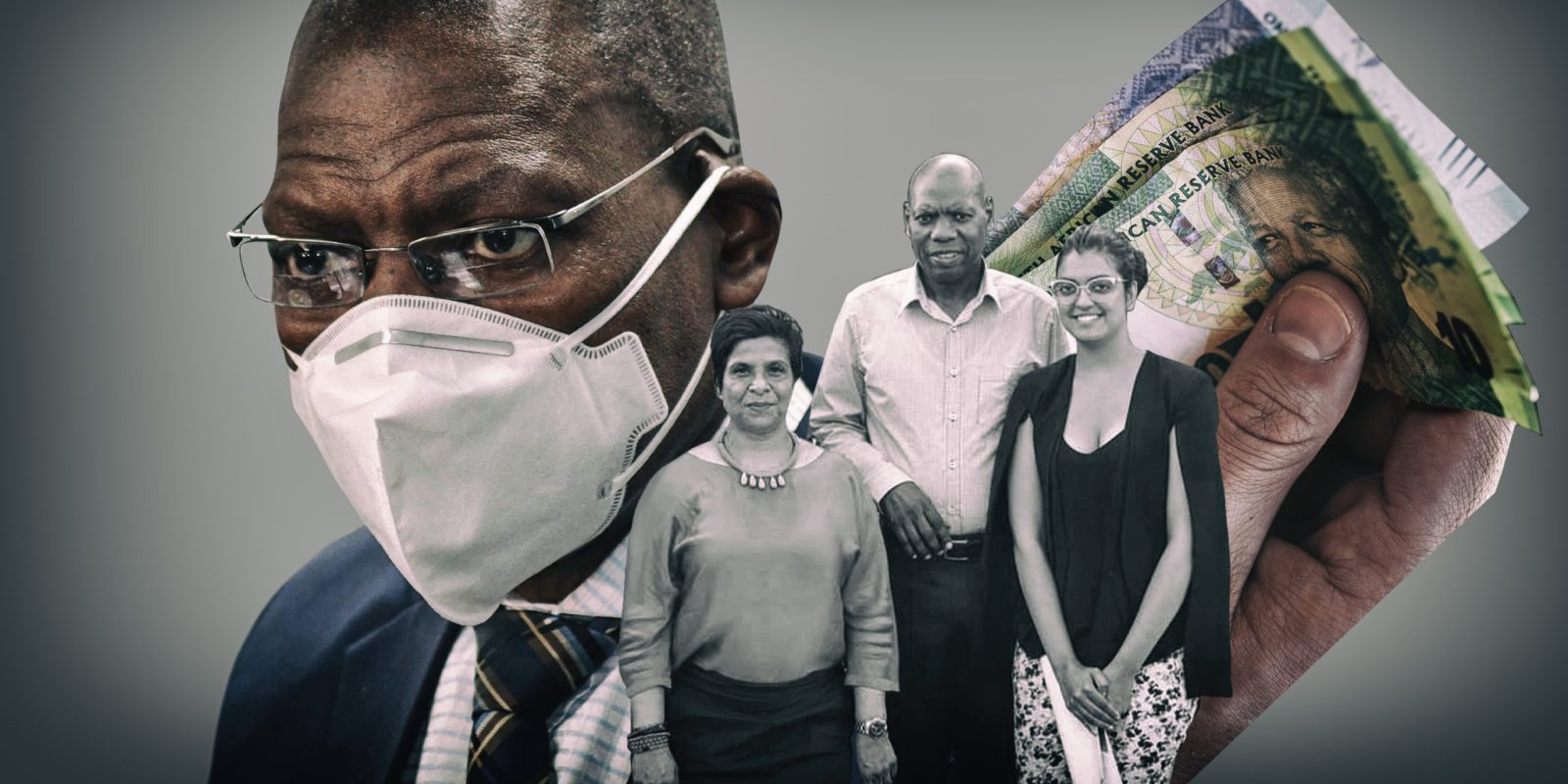 A former employee at health minister Zweli Mkhize’s Pietermaritzburg-based non-profit foundation, and the husband of one of his ex-Luthuli House colleagues, are among those who benefited from the health department’s contentious R82-million Digital Vibes communications deal. This brings to four the number of people linked to Mkhize who pocketed Covid-19 cash via this contract.

A former employee at Zweli Mkhize’s Ikusasa Le Afrika Foundation (ILAF) is among a coterie of individuals linked to the health minister who benefited from a contentious R82-million Covid-19 communications deal.

Yenzi Sokhela, originally from KwaZulu-Natal, worked as a communications specialist at the Pietermaritzburg-based foundation before she joined Mkhize’s so-called #Unity campaign ahead of the ANC’s Nasrec conference in 2017.

Mkhize founded ILAF in 2013 and still serves as its chairperson, according to the organisation’s website.

Scorpio has reliably learned that Sokhela started working for Digital Vibes in early 2020, after the company had secured a lucrative communications contract from the Department of Health (DoH). We also independently obtained documents that list Sokhela as a Digital Vibes employee.

Digital Vibes was first appointed in late 2019 to deliver communications services for the DoH’s National Health Insurance (NHI), but its scope of work was extended in March 2020. The company ultimately secured orders for work related to Covid-19 valued at R82-million.

The firm’s managing director is Stanger local Radha Hariram, but several developments in the company’s history hint at the possibility that Hariram was not really in charge. 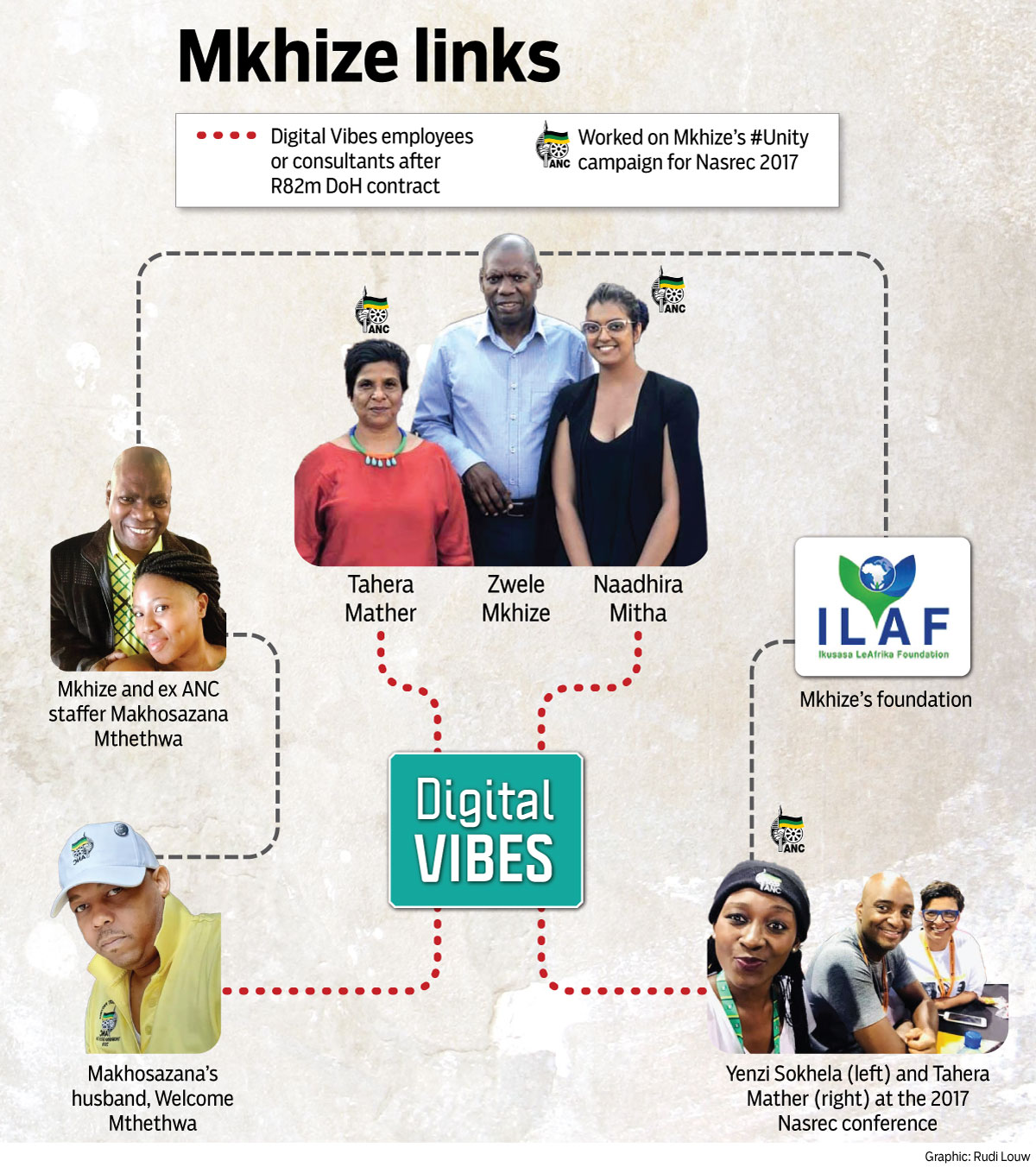 Daily Maverick has previously reported that Mather and Mitha started working as “consultants” to Digital Vibes after the company secured the lucrative DoH contract.

But sources familiar with the matter have alleged that Mather and Mitha ran the show at Digital Vibes.

Before her move to Digital Vibes, Mitha had worked as Mkhize’s personal assistant at the DoH. She also worked in Mkhize’s office when he was minister of cooperative governance and traditional affairs (Cogta) in 2018.

Sokhela did not answer her cellphone or respond to detailed queries sent on WhatsApp.

We have also found links between a fourth Digital Vibes employee and Mkhize.

Welcome Mthethwa, who according to documents joined Digital Vibes in March 2020, is the husband of former ANC staffer Makhosazana Mthethwa. She worked at the party’s department of information and publicity, a communications unit that operates from the ANC’s headquarters at Luthuli House in Johannesburg.

According to ANC spokesperson Pule Mabe, Mthethwa left the ANC “over a year ago”.

Like Mather, Mitha and Sokhela, the Mthethwas also originally hail from KwaZulu-Natal.

Photos from several social media accounts, including her own, show Makhosazana Mthethwa posing with Mkhize.

In 2016, when Mkhize still worked at Luthuli House as the ANC’s treasurer-general, Mthethwa and Mather posed next to Mkhize for a picture taken on his 60th birthday.

She has also posted a picture of Mkhize holding her baby.

“@dr_zwelimkhize humble as ever always good seeing you Khabazela,” Mthethwa captioned yet another photo of her and Mkhize posted on her Instagram account in March 2018.

Scorpio sought comment from Makhosazana Mthethwa regarding her apparent ties to Mkhize and her husband’s position at Digital Vibes.

“None of your business,” reads her terse response to several detailed queries.

We also contacted her husband.

“Please direct any questions to the Digital Vibes. Thanks,” responded Welcome Mthethwa.

“We will try to meet your deadline,” Maja told us last week, but neither responded.

The DoH earlier denied that Mkhize had played any role in the appointment of Digital Vibes.

The Auditor-General, in 2020, flagged the company’s original appointment for NIH work as irregular on the basis that the DoH did not follow an open tender process.

The deal is now being probed in two separate investigations.

Dr Sandile Buthelezi, the department’s director-general, earlier indicated that the DoH had appointed an independent investigator for an internal probe.

The Special Investigating Unit (SIU), meanwhile, has been looking at the contract after an “anonymous whistle-blower” approached the agency, SIU spokesperson Kaizer Kganyago recently told the SABC.

The SIU’s scope includes probing an allegation that Mkhize may have influenced the appointment process in order to channel lucrative work to a company with strong links to his associates.

“That is one of the things that are in the allegations, therefore we will have to prove whether it is true or not. The allegations are about that [alleged collusion]… and it is also about the fact that the process of the appointment of this company was not done properly.

“All of this we will look into properly,” said Kganyago. DM