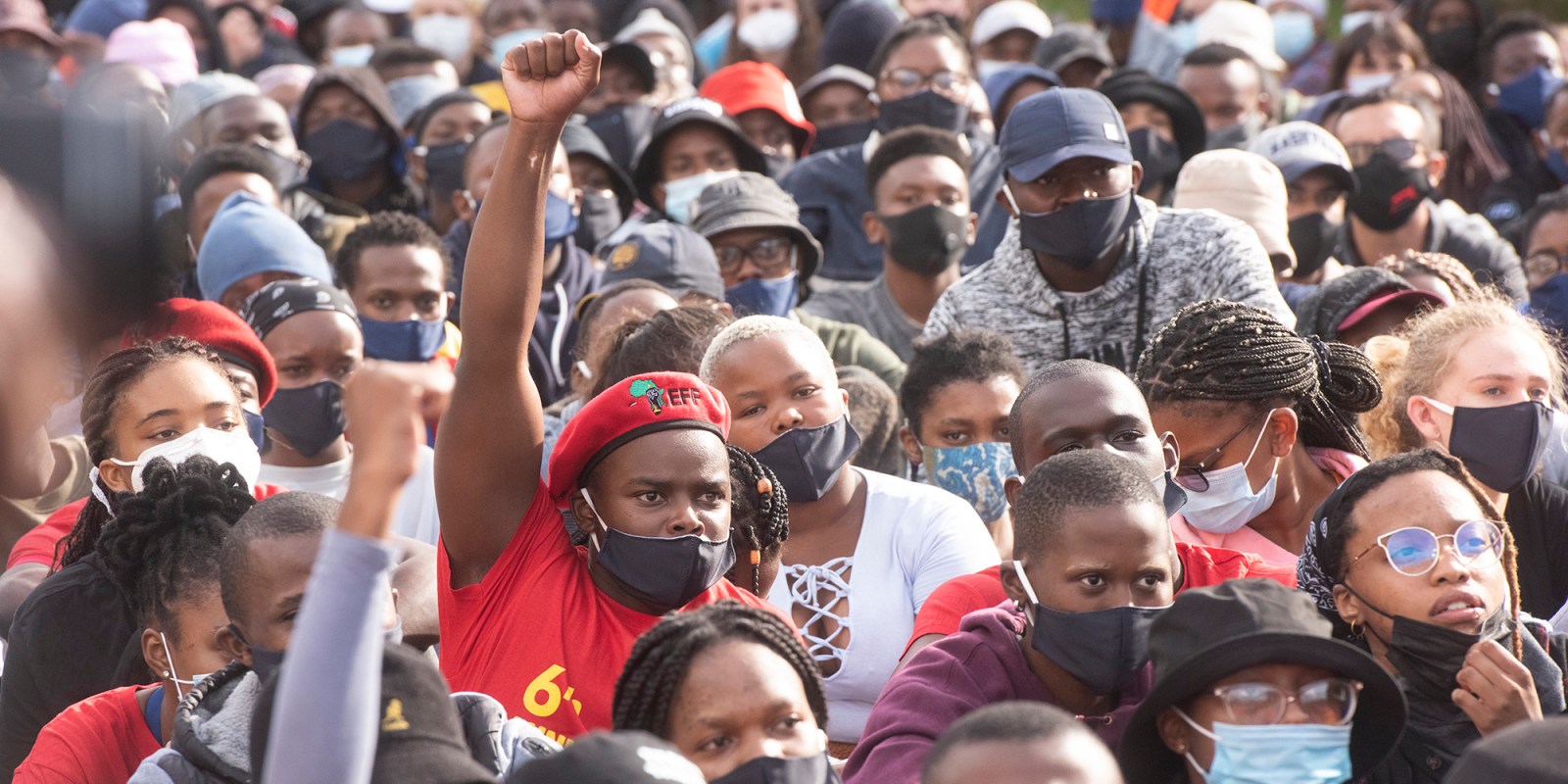 University of Cape Town students protest on 12 March 2021 against the exclusion of indebted students from registering for the year. (Photo: Gallo Images / Brenton Geach)

On Friday, UCT students joined protests against the exclusion of students with historical debt. On Saturday 13 March, UCT’s Council announced that the fee block for 2020 debt will be lifted to allow students to register.

A day after UCT students joined Wits students in protesting for their institutions to allow students with debt to register, on Saturday 13 March, UCT’s Council announced that “the fee block in respect of 2020 debt will be lifted for South African students and students from the rest of Africa”.

“This applies to both undergraduate and postgraduate students, excluding students from the UCT Graduate School of Business. The lifting of the fee block does not extinguish the existing debt,” reads the statement.

More than 1,600 students at UCT have debt amounting to R88-million.

The university joins a number of other institutions that have had to make concessions to allow students with debt to register.

University of the Witwatersrand (Wits)

Wits has seen student protests for the past week over the exclusion of more than 6,000 students whose debt totalled R1-billion.

In a statement last week, Vilakazi said: “It is worrying that student debt amounts to approximately R1-billion now, almost double what it was at the end of 2017. But we remain committed to assisting as many academically talented students as possible to register, within the possibilities of the resources that we have available.

“We have to ensure that the university remains financially sustainable and that we continue to offer quality higher education.”

According to the statement, Wits University has been assisting students by allowing those who owe less than R10,000 from the previous year to register. Wits has also allowed students who have paid 50% of their debt – if the debt is above R10,000 – to register.

At UJ, they’re allowing students with historical debt to register, on condition they sign an acknowledgement of debt. The registration fee is waived for students who owe less than R10,000, said Herman Esterhuizen, the university’s media liaison.

Esterhuizen told Daily Maverick that UJ has been doing this for years.

CPUT said that first-time entering and first-year students will be able to register without any financial clearance.

University of the Free State (UFS)

Last week protests broke out at UFS over fees. In a statement, UFS said that since the start of the 2021 academic year, they’ve made “a number of concessions to assist students in registering, especially for those students with outstanding debt”.

University of the Western Cape (UWC)

UWC hasn’t had any student protests over fees. UWC has allowed students with historical debt to register.

The university has more than R400-million of historical debt from about 33,000 students.

In an email sent to students earlier this month, UWC Vice-Chancellor Tyrone Pretorius, said: “The university understands the difficulties many students are experiencing and has decided to financially clear all students to allow them to register.

“All students will have their registration fee added to their tuition account and the upfront payment will be waived, allowing for immediate registration.”

This doesn’t mean that students won’t have to pay their historical debt, it just won’t be a barrier to registering for the new academic year.

Students must submit a payment plan for their student debt by April.

“The meeting resolved to call for a national shutdown of all the 26 universities from Monday the 15th of March 2021. All 26 University SRCs have supported this decision unanimously. The shutdown will continue until our demands are met,” said the body.

Saus sent Blade Nzimande, the Minister of Higher Education, Science and Technology, a list of 15 demands, which included:

“The South African Union of Students will be embarking on nationwide institutional visits to ensure that all universities participate in this shutdown… We are also warning Vice-Chancellors to avoid the temptation of targeting SRC members who will be implementing this resolution. We will do anything to defend our comrades on the ground,” reads Saus’s statement.

The Democratic Alliance Student Organisation (Daso) has called for Nzimande to immediately resign and that “all accepted students should be allowed to register under special circumstances until a finance solution is reached”. DM