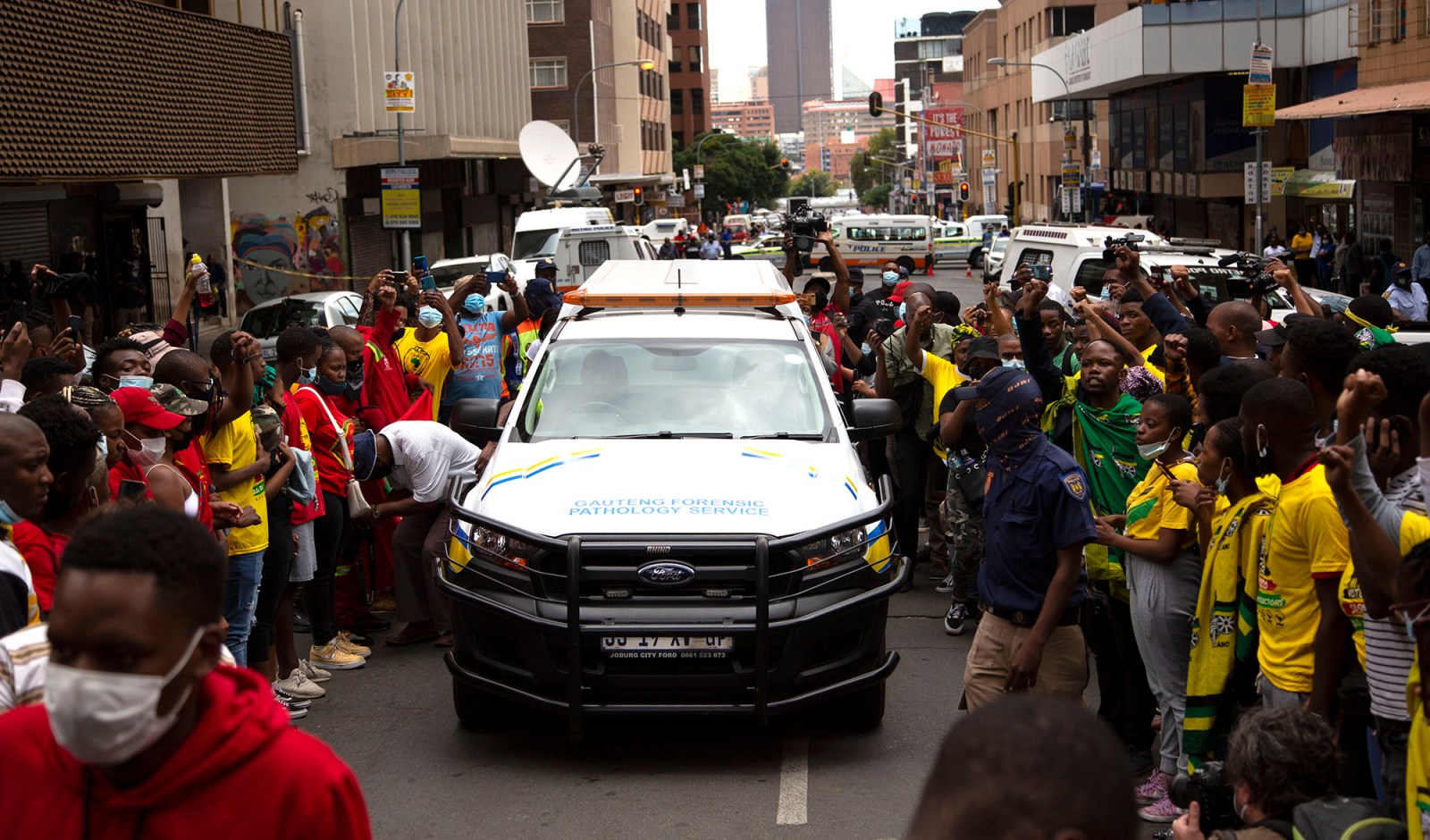 Students protesting against funding difficulties at institutions of higher learning formed a guard of honour when Mthokozisi Ntumba's body was removed. Ntumba was shot during clashes between police and students on Wednesday. (Photo: Felix Dlangamandla / Daily Maverick)

The distraught family of a man killed when police and University of Witwatersrand students clashed in Braamfontein on Wednesday want swift action.

Mthokozisi Ntumba told his family he was going to see the doctor. That was the last time they heard from him. Ntumba’s wife kept calling him to check on him, but he didn’t answer his phone.

Later, Ntumba’s wife received a call from her husband’s phone, but the voice on the other end was not the one she was accustomed to. The heartbreaking news she received from the caller left her shattered.

Ntumba, who worked for the Department of Human Settlements, was killed as he left a medical centre in Braamfontein, allegedly shot dead by the police during a protest by Wits students. He was an innocent passerby.

Ntumba’s cousin Sthembiso Jwara said, “When he left the doctor’s that’s when he met his fate.

“What the family wants now is swift justice. It was traumatising for most family members, who learnt about the death on social media. We want to see accountability.”

Jwara said he received a phone call from a relative notifying him about his cousin’s death.

“I then immediately switched on the TV to watch on the news, but what I found were images that I was not ready for.”

Jwara said the rest of the family learnt of the killing on social media.

Jwara said what he would miss most about his cousin was the jokes they shared whenever they were together.

“I will most remember him for his jokes. We joked a lot when we were together, simple, subtle and grown-ups’ jokes not intended to offend anyone.”

Jwara said his cousin “was passionate and ambitious. He was very responsible and he was a family man. He was responsible to the point where he did not just care for his immediate family, but also his extended family. He played the leading role in our family.

“Last year he graduated with a Masters.”

Ntumba left behind four children (two boys and two girls) and his wife. The youngest child is only eight months old.

No one has been arrested for the incident and police have not yet taken responsibility for the killing. The Independent Police Investigative Directorate (IPID) said its investigation team was processing voluminous evidence gathered at the crime scene.

Police Minister Bheki Cele had no explanation for the killing. “Someone… just went crazy,” he said.

“It’s either they involve themselves in crime or shoot the working class,” said Ndiki.

Collen Malatji, of the Ekurhuleni ANC Youth League, said, “When you do not provide education for all, which was promised, you will have a lot of young people revolting. More than 27 years later, the free education is still not attainable.”

Many South Africans who saw the widely circulated images of the incident have condemned the actions of the police.

President Cyril Ramaphosa said he saw the images on TV, and that the students’ protests “did not warrant the amount of resistance and push from the police”.

SRC leaders from other institutions have pledged to support the Wits students’ cause. University of Pretoria students marched to the Department of Higher Education in Pretoria on Thursday in support of the Wits students.

The protests entered a third day on Thursday as students protest against financial exclusivity at institutions of higher learning.

Said Jwara, “My cousin worked extremely hard to get where he was; the police owe it to his family to tell us why they killed him so heartlessly.” DM