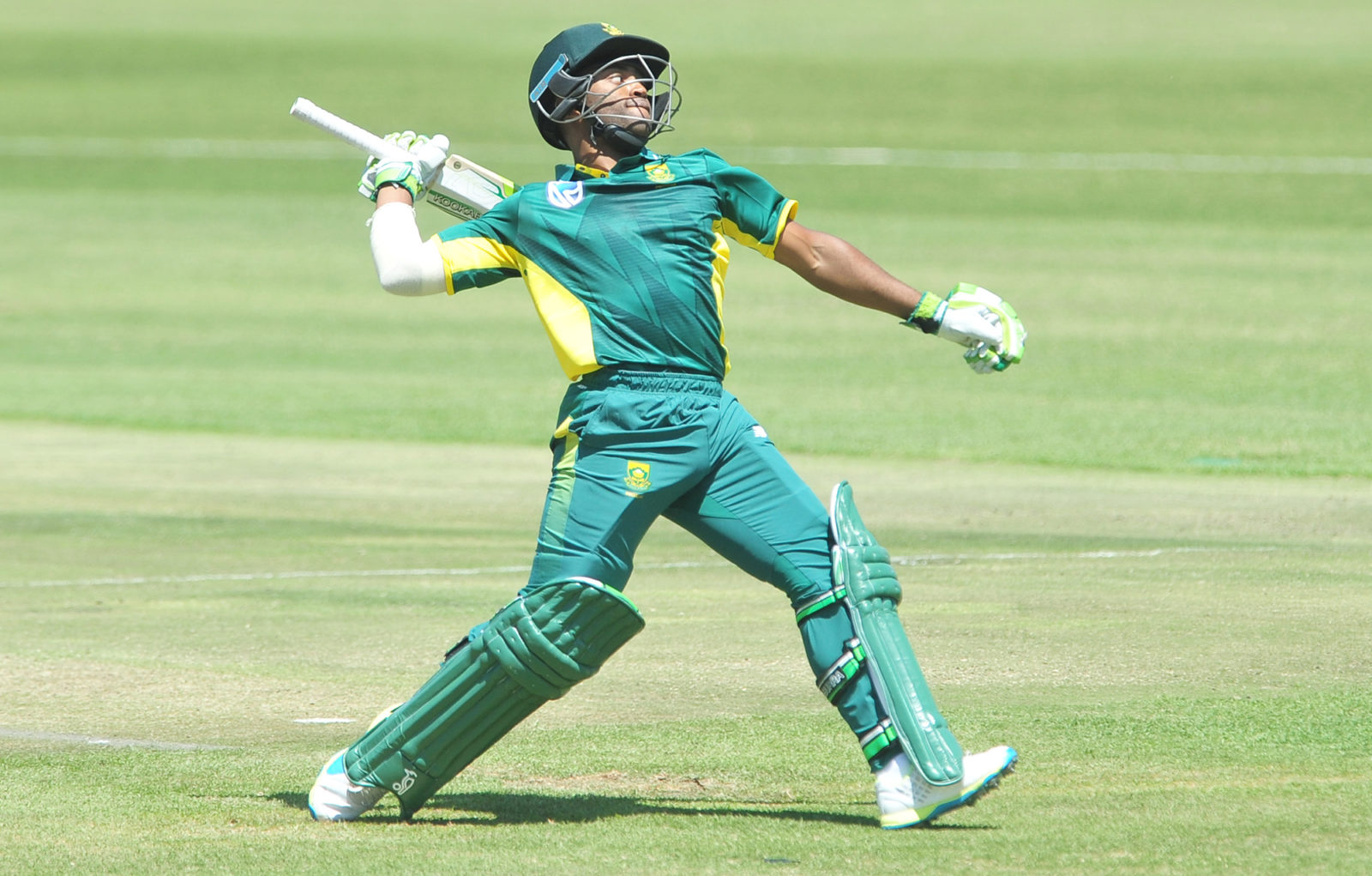 Temba Bavuma celebrates his 100 runs during the Momentum ODI cricket match between South Africa and Ireland at Willowmoore Park in Johannesburg on September 25, 2016. ©Samuel Shivambu/BackpagePix

The doubt, the adversity, the slumps and the successes have moulded Bavuma over the past decade to the point where Cricket South Africa’s (CSA) hierarchy realised he was ready for the captaincy role.

At a time elite sport is calling out for diversity, Bavuma’s appointment is fully deserved, but happily also a positive image. Could it have the same impact as Siya Kolisi’s elevation to Bok skipper, which inspired the Boks to Rugby World Cup 2019 glory?

Bavuma is part of a dual leadership future for the Proteas. Opening batsman Dean Elgar was named Test skipper for the next two years, with Bavuma his vice-captain, in the longer format of the game.

Bavuma will lead the Proteas in the 2021 and 2022 ICC Men’s T20 World Cups as well as the ICC Men’s World Cup in 2023. Elgar will take the reins into the next cycle of the ICC World Test Championship.

They replace Quinton de Kock in both formats. The wicketkeeper/batsman struggled for form after being elevated to the captaincy and requested a mental health break from the game when the Proteas returned from an unsuccessful tour of Pakistan.

The appointment of Bavuma and Elgar will lift some pressure from the prodigiously talented De Kock, while officially recognising the leadership capabilities of two of South Africa’s most senior players with formal roles.

Both have captained sides in the past: Bavuma led the Lions to the domestic T20 title just last Sunday, while Elgar once skippered the Proteas in a Test.

“I’ve enjoyed the responsibility of leading the [Lions] side,” Bavuma said. “I’ve done it now for several years. It’s a balancing act between your own ambitions as a player and the interests of the team.

“And winning, that’s the other thing. Everything I do, the decisions I make, are geared towards what is best for the team. I’ve been able to get results that have been favourable. Being captain is something I enjoy. It comes with pressures, like anything in sport and the world.”

The task before Bavuma and Elgar is difficult as the Proteas attempt to rebuild and rebrand after two dismal years that have yielded only 14 wins in 40 matches across all formats. But if ever there were two players who represent all the clichés of “grit”, “determination” and “application”, it’s Bavuma and Elgar. They are the totems other players can rally around.

For Bavuma, though, the social significance of his elevation to national captain cannot be separated from his cricket claims. In a year when the Black Lives Matter (BLM) movement highlighted discrimination and issues of racial tension in cricket and other sports, Bavuma’s appointment is a strong message of inclusion.

Bavuma is well aware of the optics of his appointment and doesn’t want to shy away from how important it is for black children to have black role models. But he is also, in simple terms, a cricketer who wants to perform and be judged on his ability.

“I’d be lying if I said it [being the first black captain] didn’t mean anything to me,” he said. “I understand the deeply rooted significance of it all. I can completely understand why people in our country would celebrate it for what it is.

“I was offered the position as captain and it came to me as a surprise, but it was a no-brainer. I don’t think a lot of people would turn down this type of honour and privilege.

“Obviously there’s anxiety about not knowing what to expect, but a lot of comfort comes from the fact that I know my players and the people who have entrusted me with the decision. I draw a lot of confidence from that because those are people of stature.

“I’d be lying if I said it does not make me think of where everything started for me, and how I’ve been able to go through a journey and get to this point. Combined with being known as the first black African captain, I’d also like to be known as someone who led the team very well and created a legacy for himself.”

Bavuma’s chance to build that legacy starts against Pakistan at home next month. Elgar will have to wait a little longer to mould the Test team into his formidable image.

CSA director of cricket Graeme Smith said the decision hadn’t been that difficult given Bavuma’s white-ball form over the past two years.

“We’ve always known about Temba’s leadership qualities… the way he’s been operating in the squad and experience he brings,” he said. “The nature of his tactical captaincy at the Lions, and the feedback we’ve received from within the squad – from the managers and coaches – have been really positive around Temba.

“We dug deep, and both these men came out with flying colours. We believe they’ve got cricket brains, the right character, the right credentials to shift South African cricket into a positive space.

“We want to back them, we want to support them, and we want to empower them to take South African cricket forward; hopefully into a better cricketing space than what we have been in over the last period.”

Elgar will lead from the front

If Elgar’s appointment leads to success anywhere close to that of Smith’s tenure as captain – which led South Africa to the top of the world Test rankings – then the Proteas will be a very good Test team. Elgar is often compared to Smith in terms of batting style and temperament. Now he has the chance to prove he can match the former great as a skipper, too.

At the start of 2021, the uncomplicated left-handed Elgar was the leading opening bat Test run-scorer in the previous five years. His batting record means his place in the team is not in doubt, which is a crucial element within an environment of extreme flux.

Kagiso Rabada, Keshav Maharaj and perhaps De Kock are the only players nailed down in the Test team other than Elgar. Bavuma is probably in that band now as well. Which makes Elgar’s job challenging and exciting. It’s a virtual blank canvas.

“It’s going to be a serious challenge, but it’s a challenge I’m really looking forward to. I feel if we get a few things in place we can definitely take the Proteas brand back to where we were a few years ago. That will be my biggest goal. But I know it’s going to be hard work,” Elgar said.

“Sport doesn’t stop for anyone when they leave the game. We owe it to the game to carry on moving it forward. We’ve got a lot of young, exciting players who’ve been breaking down doors in domestic cricket to try and get a foot in this squad.

“It’s good to have fresh blood around. We aren’t at the level of experience we were a couple of years ago, but we do have a couple of experienced players in the squad. I’m going to rely on them to help me through this journey.”

Smith added: “I’ve played with Dean and known him a long time, and he epitomises the character we would like to see from our line-up. There’s no hiding from the fact that we need to improve as a cricket team – our results and our standard of play need to improve.

“Dean leaves everything on the field. Tactically we will be there to support him. He leads by example and certainly has the experience. The time is right and he wants the job, which is an important part of captaining. If you’re a reluctant captain it makes it very hard.”

De Kock’s four Tests in charge of the Proteas produced mixed results, with South Africa beating Sri Lanka 2-0 on home soil but losing 2-0 in Pakistan. His batting form, though, suffered while his captaincy decisions became increasingly uninspiring as he struggled with leading the team, keeping wicket and batting up the order.

De Kock pulled out of the domestic T20 competition for a mental health break. Living in Covid-induced bio-bubbles, in addition to the burden of captaincy, clearly took its toll.

Smith said he had been in constant communication with De Kock and was certain the ex-skipper was still committed to playing for the Proteas.

“Since he got back from Pakistan we’ve had a number of engagements with Quinton. It was felt that the burden of leadership was just too much for a person or a player like Quinton. We wanted to free him up,” he said.

“There’s always a bit of emotion around these things,” Smith added. “Quinton understands there’s a burden that comes with leadership. It hasn’t been an easy time for him either. He’s a proud guy.

“But the selection panel, the coaches and I truly believe this is the right way forward. It required us to make a tough and important decision for South African cricket. We feel it’s a very difficult job to captain in all three formats. The stresses on one man to do that, the workloads, the job in itself… we felt it was too much to give to one person.”

Convenor of selectors Victor Mpitsang stressed that De Kock had not been sacked as captain.

“Quinton hasn’t been fired,” he said. “The agreement with Quinton was that we needed a Test captain, and it was just an interim job until after the Australian series (scheduled for March), which never happened. Quinton probably feels that he needs to focus on his game. We’ve come to an agreement to say that he doesn’t need the captaincy anymore.”

So, it’s over to Bavuma and Elgar to take the Proteas forward. At this moment in history, they are undoubtedly the right men for the jobs. DM