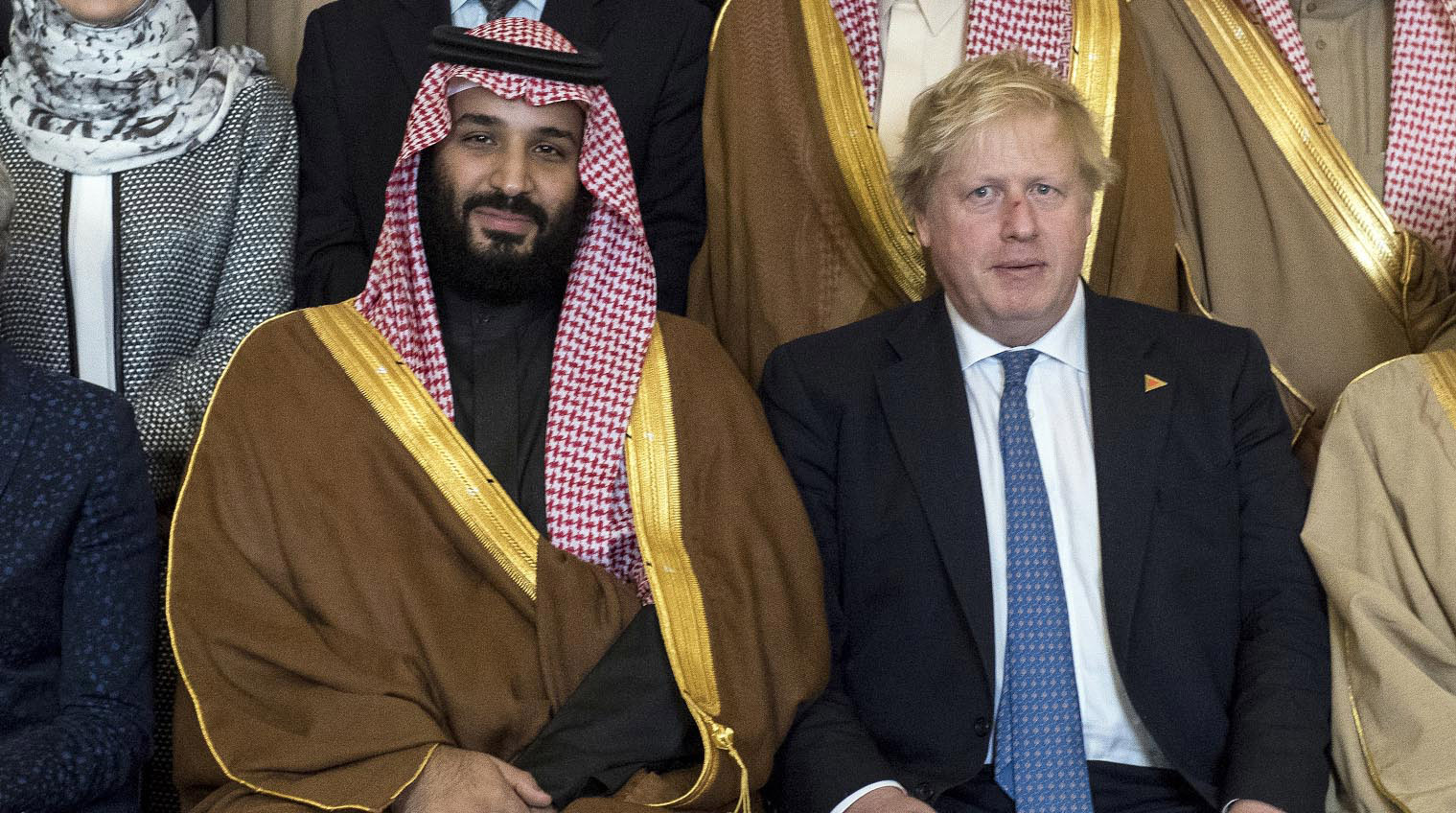 Mohammad bin Salman with Boris Johnson when he was British foreign secretary in 2018. (Credit: EPA-EFE / Will Oliver / Pool)

The CIA believes Saudi Arabia’s crown prince Mohammed Bin Salman, or ‘MBS’, orchestrated the gruesome murder of journalist Jamal Khashoggi in 2018. What can Britain, which routinely condemns human rights abuses by enemies, do to stop one of its closest allies?

Saudi Arabia’s de facto ruler, MBS, is not only complicit in the Khashoggi murder. He also imprisons dissidents and journalists at home and wages a brutal war on neighbouring Yemen, in which a quarter of a million people have died.

The UK government could take 10 steps to punish and deter the Saudi ruler.

Anyone on the sanctions list is banned from entering the UK and has their British bank accounts frozen.

In July, Foreign Secretary Dominic Raab placed sanctions on 20 Saudi officials involved in the murder of Khashoggi – but so far Raab has refused to sanction MBS himself.

Saudi Arabia says its courts investigated Khashoggi’s death and punished the rogue agents who were responsible. But human rights groups say the trial was a sham, as the Saudi regime cannot be trusted to investigate itself.

Raab did not criticise the trial and maintains the fiction that Saudi investigations satisfy international standards.

Alleged war crimes in Yemen – such as bombing schools and hospitals – are investigated by the Saudis’ secretive Joint Incidents Assessment Team (JIAT), which routinely absolves its own forces.

By endorsing the JIAT, Britain allows the Saudis to investigate themselves. The UK then defends its record-breaking arms sales to Saudi Arabia by claiming the Saudis are responsible customers.

The UK should demand independent investigations into war crimes in Yemen and release any evidence it has about unlawful airstrikes.

The day after Britain announced sanctions on Saudi officials last year, it resumed arms exports to Saudi Arabia for use in the Yemen war. Since then, it has authorised weapons sales worth more than £1.4-billion.

The Saudi air force uses both British and US-made planes to bomb Yemen. It is so dependent on spare parts from the West that experts say it could run out of them within weeks – so a full embargo would ground its jets.

Britain did impose an arms embargo on the Yemen war for almost a year but it was full of loopholes.

The embargo only stopped new arms sales. Companies that already had “open licences” to supply the Saudis with an unlimited amount of weapons, such as BAE, were hardly affected.

Declassified can reveal that during the arms embargo, Britain’s Royal Air Force (RAF) made three separate sales agreements with BAE, to provide the Saudi air force with thousands of spare parts for its combat jets.

Whenever the Saudi air force is running low on supplies, BAE can analyse a list of surplus British military stock and divert the necessary parts to Riyadh. BAE flies spare parts from its factories in England to the Saudis every fortnight –via an RAF base on Cyprus.

Any future arms embargo must be much tougher than the last one.

When Britain sold combat jets to Saudi Arabia, it agreed to ensure the country’s air force could maintain and fly the aircraft – even in times of war.

The Saudis pay around £60-million per year for 200 UK military personnel to support this scheme, known as the Ministry of Defence Saudi Armed Forces Projects (MODSAP).

Some RAF personnel are also on secondment to BAE Systems in Saudi Arabia. They provide “routine engineering support” for Saudi combat jets “including aircraft engaged in military operations in Yemen”.

The secondees store and issue weapons for use by the Saudi air force, provide pilots with “generic training support” and load their weapons for bombing practices.

The RAF also has several serving personnel embedded in the Saudi Air Operations Centre in Riyadh, where they have a ringside view of the Yemen war.

And BAE employs about 6,500 people across Saudi Arabia, of which around 30% are expatriates – many of them ex-British military. Their roles include instructors, engineers and are even responsible for organising the parachutes and survival equipment worn by Saudi pilots.

Britain could end the MODSAP scheme and pass an anti-mercenary law to stop UK military veterans working for countries that abuse human rights.

In addition, around 11 British soldiers are on loan to the “special security brigade” of Saudi Arabia’s National Guard (SANG), an elite unit known as the “white army”, which protects the ruling House of Saud.

Their work has included “advice to the National Guard at all levels of command… for the full spectrum of military operations on the southern Yemeni border”.

Plus, around 74 MOD personnel are stationed in Saudi Arabia to work on SANGCOM, a £2-billion project to constantly “modernise” the national guard’s communication equipment.

Yet another group of British soldiers are in Riyadh to help defend the city from drones and rockets fired by Yemen’s Houthi rebels. The soldiers are drawn from the Royal Artillery Regiment but the MOD refuses to say how many are deployed.

Weeks after Khashoggi was killed in October 2018, the RAF went ahead with exercise Green Flag, which saw 208 military personnel and eight Typhoon jets sent to Saudi Arabia for a major training session.

As well as high profile events like that, more than 100 Saudi air force pilots have learnt to fly at RAF bases in the UK over the last decade. All the Saudi pilots “are trained to the same standards as RAF combat ready pilots,” the MOD says.

This includes “air-to-ground training sorties” on ranges in the UK. Saudi pilots trained by the MOD have gone on to undertake bombing missions in Yemen. Declassified revealed that one was shot down and killed over Yemen in 2017.

We also exposed how senior Saudi intelligence officers have attended spying courses in England, where classes are given by experts from UK intelligence agencies MI5 and MI6.

These courses continued after Khashoggi’s killing, despite evidence he was murdered by an elite Saudi intelligence team known as the Tiger Squad.

In addition, Saudi soldiers and naval personnel continue to be welcomed on training courses in the UK, including at prestigious sites such as Sandhurst.

Saudi Arabia, and especially its huge wealth fund where it puts its oil revenues, has been allowed to make investments worth a staggering £60-billion in the UK. It owns part of oil company BP and recently bought a stake in telecoms giant BT.

The government should not allow sections of the British economy to be bought by repressive regimes abusing human rights.

Some say Britain cannot afford to fall out with MBS, who at 35 could rule Saudi Arabia for decades. Yet the UK can take several diplomatic steps to help reduce repression in the kingdom.

The UK ambassador should request access to political prisoners, as well as attend all court cases where activists are on trial. Meanwhile the Foreign Office in London could open a dialogue with exiled opposition parties, such as the newly formed National Assembly Party.

The UK must show it is genuinely concerned about media freedom and doesn’t just use the issue opportunistically to criticise certain countries.

Blocking the extradition of Julian Assange to the US and releasing him immediately from Belmarsh prison in London would send a clear signal.

Many forget that WikiLeaks published a trove of Saudi diplomatic files in 2015 which revealed how the UK helped Saudi Arabia get a seat on the UN human rights council – another example of the kind of diplomatic favours Britain should stop. DM