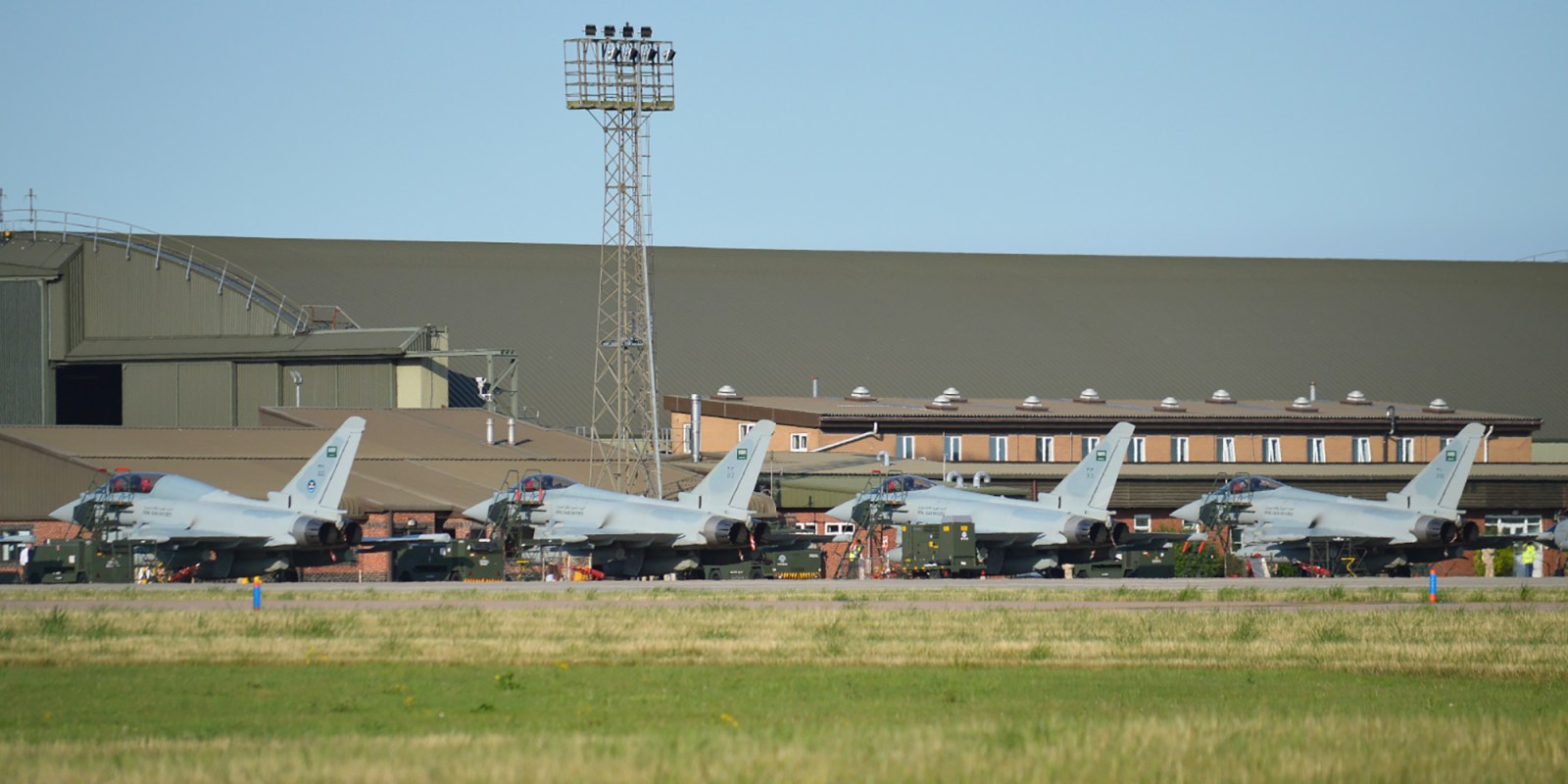 Britain’s Royal Air Force has trained 25 pilots from Saudi Arabia to fly the powerful Typhoon jet and continues to provide instruction on using missiles involved in devastating attacks on civilians in Yemen.

The Royal Air Force (RAF) has taught 25 Saudi Typhoon jet pilots since 2008, with up to five pilots still receiving the training at RAF Coningsby in Lincolnshire.

The scale of UK support to Saudi Arabia could mean that as many as a third of its Typhoon fleet is being flown by British-trained pilots. Defence Minister James Heappey told Parliament on Monday October 5 that the RAF does not “monitor the size of the current RSAF [Royal Saudi Air Force] Typhoon pilot cadre”.

Saudi Arabia has used the Typhoon extensively in Yemen since 2015, a conflict which has become the world’s worst humanitarian disaster, with millions of people on the brink of famine.

While the government has previously admitted training more than 100 Saudi Air Force pilots in the UK during the past decade, it is the first time ministers have clarified how many have learnt to fly the Typhoon, which is the most powerful aircraft Britain supplies to Saudi Arabia.

The revelations add to a growing body of evidence that Saudi airstrikes in Yemen are heavily dependent on British arms and training.

Heappey, who was answering questions from Labour MP Lloyd Russell-Moyle, confirmed that Britain is also continuing to provide Saudi pilots with training on air-to-ground attacks. The instruction takes place in a Typhoon simulator jointly operated by arms company BAE Systems and the Ministry of Defence (MoD).

The Paveway IV is a “smart bomb” whose guidance system is manufactured in the UK by Raytheon and has been linked to strikes on civilian targets in Yemen. Raytheon UK is chaired by Conservative peer Lord Strathclyde.

The government has also conceded that “refresher training” for qualified Typhoon pilots is being delivered by RAF instructors in Saudi Arabia, who are on secondment to BAE.

At least one Saudi Typhoon pilot has died fighting in Yemen, but it is not known where he learnt to fly.

The Saudis are joined for Typhoon training in the UK by a small number of Qatari and American students, plus just 20 British cadets. Last year it emerged that 350 British military officers were waiting for pilot training slots to become available, and training of fast jet pilots was taking an average of seven years.

The delays in training British pilots were allegedly due to a shortage of RAF flying instructors, who were being tempted to take up “six-figure tax-free salaries with BAE Systems training the Saudi Air Force”.

The revelations come as new figures show the UK is the world’s second-biggest arms exporter, with Saudi Arabia as its largest customer. UK companies exported £11-billion worth of weapons in 2019 – more than Russia and France.

Britain has held this position throughout the past decade, behind only the US. The arms sales are often accompanied by UK military training to ensure customers can operate the equipment.

One of the most lucrative deals involves a contract signed between the Labour government and Saudi Arabia in 2007 to sell 72 Typhoon jets manufactured by BAE at factories in the UK. The deal has been dubbed Project Salam – an Arabic word for peace.

Every week, BAE sends a supply plane from its Typhoon factory in Warton, northern England, to Saudi Arabia’s main Typhoon base at King Fahad Air Base in Ta’if. The plane refuels at the RAF Akrotiri base in Cyprus, where its crew stay overnight.

The logistics flights have continued throughout the Covid-19 pandemic and a court order against new UK arms sales to Saudi Arabia.

Since Trade Secretary Liz Truss resumed licensing arms sales to Saudi Arabia on 7 July, at least 20 children are alleged to have been killed in airstrikes by the Saudi-led coalition.

One of the most controversial attacks took place at Washhah district of Hajjah governorate in northwest Yemen on 12 July, which the coalition claims to be investigating. The MoD has not answered Declassified’s freedom of information request about the Washhah strike, despite submitting it more than 10 weeks ago.

UK support for the Saudi military has become so controversial that in August, Lance Corporal Ahmed al-Batati from the Royal Signals Corps protested in uniform outside the MoD building in London.

He claimed the government has “blood on [its] hands” for selling weapons to Saudi Arabia and was arrested by the Royal Military Police. Declassified understands that an investigation into the incident is ongoing.

The number of asylum claims from Yemen has risen steeply since the war began. The latest Home Office figures show that in the 12 months from June 2019, 410 Yemenis claimed asylum in the UK, a 93% rise on the previous year.

Despite the Foreign Office acknowledging the scale of the humanitarian disaster in Yemen, the Home Office is targeting Yemeni asylum seekers as part of its current crackdown on immigration.

A spokesperson from one law firm Declassified contacted, Duncan Lewis, said its solicitors are working on “a significant number of asylum cases from Yemen, with approximately 24 Yemeni clients booked on recent removal flights to countries in Europe such as Spain or France”.

Andrew Smith from Campaign Against Arms Trade told Declassified: “When Saudi Air Force pilots are dropping UK-made bombs from UK-made fighter jets, it is Yemeni civilians who are paying a deadly price. The fact that Saudi pilots have been trained by UK forces makes our government complicit with every stage of the destruction.

“The level of integration between the two militaries means that the UK is tied into an increasingly aggressive Saudi foreign policy. The Saudi regime has a long and bloodstained history of repression, the fact that Boris Johnson and his predecessors have done so much to boost it exposes the rank hypocrisy of UK foreign policy in the Middle East and beyond.”

An MoD spokesperson said: “The UK is doing all it can to help end this devastating conflict by putting our full weight behind the UN-led peace process. We are not a member of the Saudi-led Coalition and have played no role in setting Saudi-led Coalition policy on airstrikes.

“We have an ongoing and wide-ranging defence engagement relationship with Saudi Arabia, which has included the provision of training courses and advice and guidance in the UK and Saudi Arabia. The training provided also covers International Humanitarian Law. All UK military personnel in Saudi Arabia are under UK command and control.”

The Saudi Embassy in London did not respond to a request for comment.DM

Phil Miller is staff reporter and Mark Curtis is editor at Declassified UK, an investigative journalism organisation that covers the UK’s role in the world.