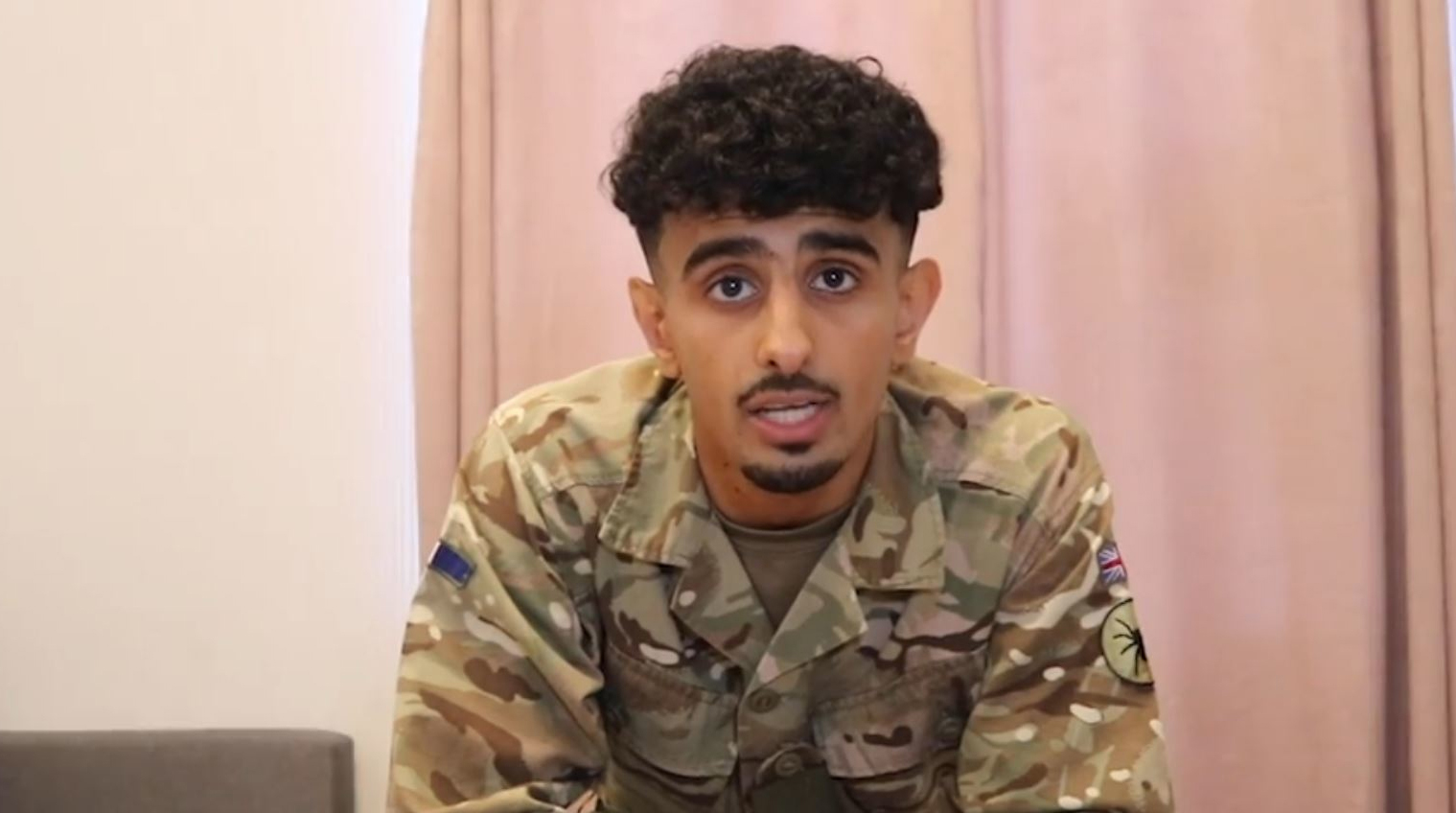 A serving British soldier is being investigated by the Royal Military Police for protesting against arms sales to Saudi Arabia. He accuses the government of having ‘blood on their hands’ and says: ‘I’d rather sleep peacefully in a cell than stay silent for a paycheck.’

The soldier, Ahmed Al-Batati, was filmed demonstrating outside the Ministry of Defence (MOD) in London on Monday before military police carried him away. The MOD has refused to comment on what had happened to him since or where he is being held.

In a video posted before the protest,  Al-Batati said he was born in Yemen and joined the British army in 2017.  Al-Batati wore combat uniform with insignia suggesting he is a lance corporal from the 14 Signals Regiment (Electronic Warfare).

The unit is part of the Royal Corps of Signals which has close connections with the Saudi Arabian National Guard, a body which protects the ruling Saud family and is supported by a permanent British military mission.

“And it’s clear this government has blood on their hands, so with that being said I refuse to continue my military service until the arms trade with Saudi Arabia has been put to an end. It is reported that a child dies every 10 minutes in Yemen, so I’ll be standing outside 10 Downing Street blowing a whistle every 10 minutes so that they can hear every time a child dies due to a war they continue to arm and support.”

The British military has around 200 personnel stationed in Saudi Arabia to support its internal security apparatus and maintain its air force, which has been undertaking airstrikes in Yemen for over five years. British arms giant BAE Systems has provided £15-billion worth of weapons and services to the Saudi military since the Yemen war began in 2015.

On 7 July, the UK government resumed licensing new arms sales to Saudi Arabia, claiming there was “not a clear risk” of British weapons being used for war crimes. At least 20 Yemeni children have been killed in airstrikes since that decision was taken.

Half of the Saudi-led coalition air raids in July hit civilian targets, in 58 cases where impact locations could be identified, according to the Yemen Data Project. The monitoring group said 18,500 civilians have now been killed or injured in airstrikes since the Yemen war began.

Al-Batati continued: “I joined the army in 2017 and took an oath to protect and serve this country, not to be part of a corrupt government that continues to arm and support terrorism. What made this decision so easy for me and why I choose to sacrifice a lot of things including possibly my freedom is for the simple fact that me myself as somebody that was born in Yemen I could have easily fell victim to one of those air strikes or died out of hunger. I’ve seen enough not to speak out and I’d rather sleep peacefully in a cell than stay silent for a paycheck.”

Al-Batati said he had started an organisation called Stand For Justice (SJF) “to make the world a better place”.

When contacted for comment, Lieutenant Colonel Richard Wade from the MOD press office asked Declassified “what sort of angle you have taken on the war in Yemen” before saying the MOD’s comment would be provided “shortly”.

An hour later, Wade said via email: “I’m afraid that I’m not going to be able to send you anything today. Please submit an FOI [Freedom of Information request] for anything that you require.”

British war veteran Joe Glenton, who served in Afghanistan and spent time in a military prison in the UK for criticising the war on terror, told Declassified that the MOD’s suggestion to resort to an FOI request “seems like a complete abandonment of how to deal with the media and the MOD needs to get a grip on that”.

Glenton, who has become a journalist since leaving the army and wrote the book Soldier Box about his experiences, commented that  Al-Batati was “rather brave in my view” as “doing a protest in uniform is a big no no”.

He added: “There are big questions, particularly for someone who says he’s Anglo-Yemeni, but for any British soldiers, about the ethics of who the British government is training and arming – look at the Royal Marines’ recent support for Belarus.

“We don’t know where Ahmed is now but I suspect he’s in custody at his unit which is a signals or electronic warfare regiment based in Pembrokeshire, Wales. If he’s been charged he will await some kind of court martial.”

Glenton added: “Because his protest was very public I suspect they will want to give him more than a slap on the wrist.” DM