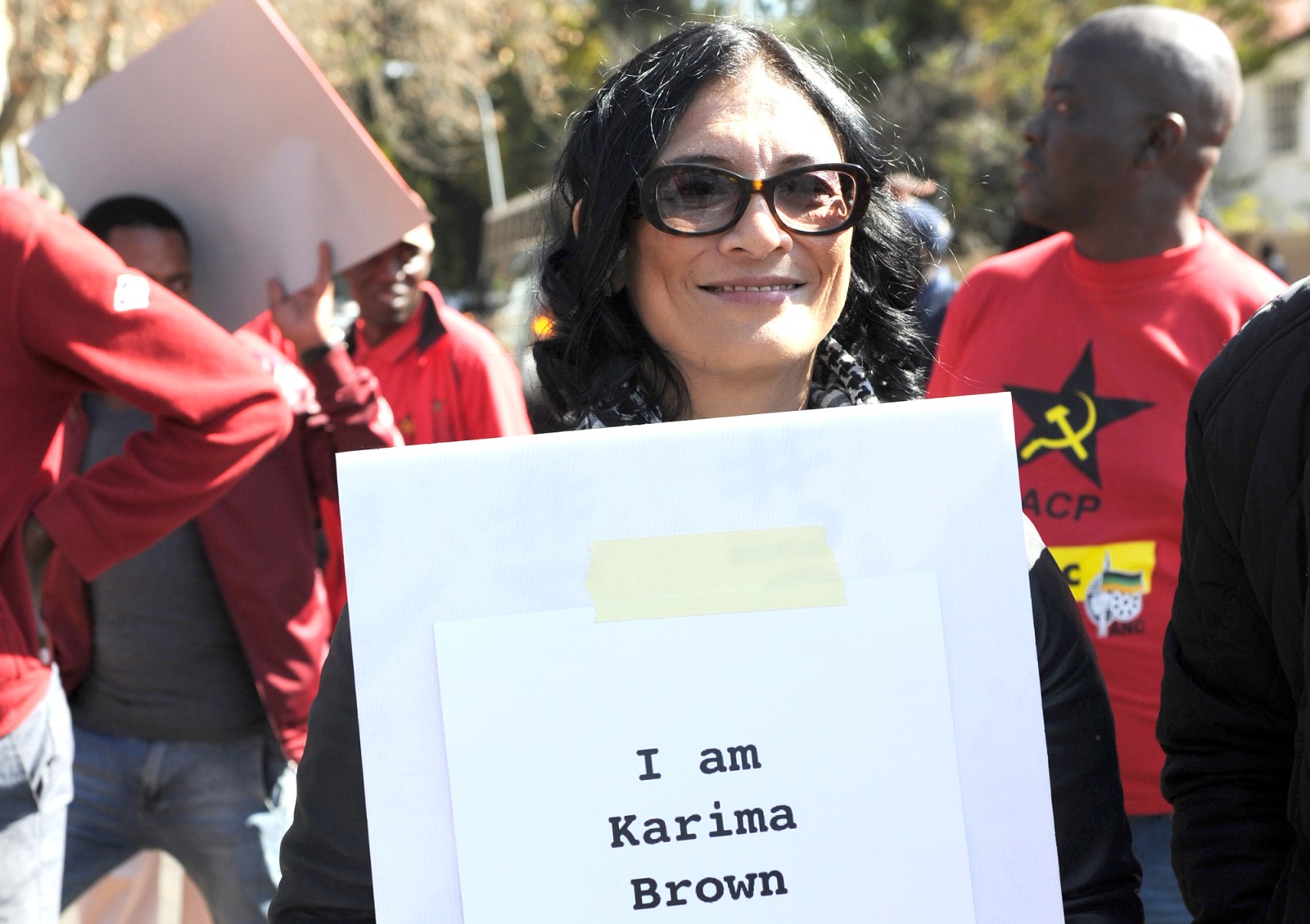 Veteran journalist and political analyst Karima Brown has passed away aged 53. In a career that saw her occupy a number of top posts in SA media, Brown was never far from controversy. But neither did she fear it. In death, even her detractors pay tribute to one of the most forceful voices in South African media.

Karima Brown was always more than a journalist. Her outspokenness ensured that she became the story herself on multiple occasions in a tumultuous career. In more than one instance she seemed to pay the price of being a highly confident woman in a society which still mistrusts such figures. But Brown would never let criticism – from the public, media colleagues or government – silence her voice. She remained to the last indefatigable and impossible to ignore.

Born Karima Semaar in Cape Town in 1967, Brown by most accounts did not so much have a “political awakening” as she grew up with politics already flowing through her veins. Her father, Achmat Semaar, was a respected Mitchells Plain community leader and ANC activist. Brown followed in his footsteps as a youth activist, becoming active in the Cape Youth Congress (Cayco) in the 1980s as a student at the University of the Western Cape. When the South African Students Congress (Sasco) was formed, she was part of the Western Cape leadership group.

“I’ve known her since she was a youth activist, and she was always questioning everything,” veteran media figure Ryland Fisher told Daily Maverick on Thursday, after news broke of Brown’s passing.

“That’s a good attribute to have if you want to be a journalist, and she took that into her journalism.”

In the course of a career which took off in the early 1990s, Brown held some of the most significant posts in South African media. They included Business Day’s political editor, presenting the Karima Brown Show on 702, launching Forbes Women Africa and serving as group executive editor at Independent Media. At the time of her death, Brown was hosting a current affairs show on eNCA called The Fix.

Although Brown’s journalistic legacy is undeniably complex, she will be remembered as somebody who was utterly fearless in holding politicians’ feet to the fire when she believed they were guilty of wrongdoing. Some grew to enjoy the challenge; Transport Minister Fikile Mbalula tweeted that he found Brown’s passing “heartbreaking” and would miss their “robust engagements”.

Fisher says that Brown’s political activism always inflected her journalism, and she “never made any secret of her political leanings”.

Brown attracted criticism for this in 2015 when she was photographed alongside fellow Independent Media editor Vukani Mde wearing ANC colours at a political rally. But her intimacy with the governing party also gave her an inside track on developments within the ANC which was the envy of many political journalists.

Former Business Day editor Peter Bruce told Newzroom Afrika on Thursday that Brown was the ideal political editor, because she was capable of answering the perpetual main question in South African politics: “What on earth is going on in the ANC? Karima kind of knew”.

Among those paying tribute to Brown after her death was Independent Media’s executive chairman Iqbal Surve, who said Brown would be remembered for “the significant contribution she made while she was executive editor at Independent Media, during a time of the group’s transition and transformation”.

Another perspective is that Brown served as Surve’s enabler in hollowing out Independent Media and precipitating its decline, but this criticism would not have fazed her. Neither is it universal. Former Mercury editor Fikile-Ntsikelelo Moya posted on social media that he had Brown to thank: “I know I wouldn’t have been editor of The Mercury without her nod”.

“She upset a lot of people and made a lot of enemies,” says Fisher, but Brown would not be daunted when following her convictions. She was a vocal advocate of media transformation and a more general commitment towards “uplifting the poorest in the society and wanting to change society for the better for the majority,” in Fisher’s words.

One of the most dramatic conflicts of her career came in the run-up to the 2019 general elections, when Brown fell foul of EFF leader Julius Malema for mistakenly sending a message meant for colleagues to an EFF WhatsApp group. EFF supporters sent Brown rape and death threats on Twitter after Malema published the journalist’s number. Brown took Malema and the EFF to court and won.

As ever, Brown described it as a matter of principle. “I won’t be cyberbullied and censored by any politician, including Mr Malema,” she said at the time.

Very few elements of Brown’s life were simple. Her marriage ended in the revelation that her ex-husband had served as an apartheid spy, a fact Brown always claimed no knowledge of. But one undisputed element was the love she had for her only child, her son Mikhail Brown.

Poet and activist Lebogang Mashile wrote that Brown was “empathetic and loving, especially towards her son for whom her entire being gushed. She adored him with a pride that can only come from the heart of a mother”.

Other friends expressed devastation at the loss. Fellow former 702 presenter and close friend Eusebius McKaiser described himself as “broken”.

Despite the feistiness she brought to her media persona, she could also be warm and fun-loving and made no secret of her enjoyment for cooking. Brown also served as a mentor to many young journalists and was particularly assiduous in supporting the careers of young women of colour.

In the days to come, much will be written about Brown’s career, and some of it will be uncomplimentary. Brown would undoubtedly have shrugged it off. As one colleague put it: “Her entire personality was: ‘This is me – take it or leave it’.” DM