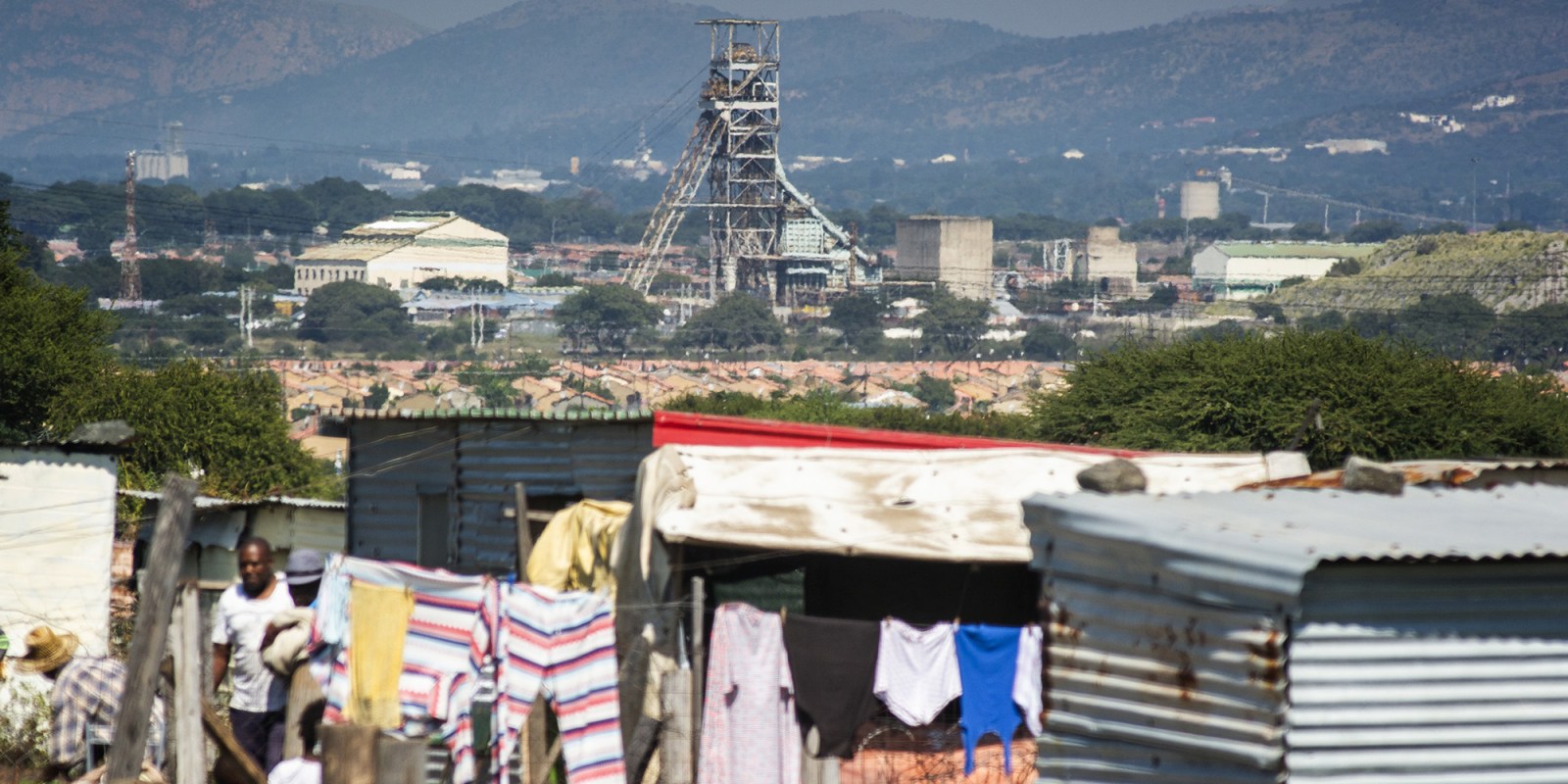 Informal housing stands in a township as the Impala Platinum Holdings Ltd., also known as Implats, shaft 1 mine tower stands in the distance in Rustenburg, South Africa, on Wednesday, April 22, 2020. South Africa allowed mining companies to resume operations at half their normal capacity as the government takes its first steps to ease a nationwide coronavirus lockdown. Photographer: Waldo Swiegers/Bloomberg via Getty Images

In the same week that Finance Minister Tito Mboweni delivered his Budget speech, the Canadian-based Fraser Institute published its annual survey and Investment Attractiveness Index of mining jurisdictions, which focuses on exploration investment.

It shows that South Africa has fallen to 60th out of 77 in 2020 from 40th out of 76 in 2019. Among the 13 African countries in the index, South Africa is now a dismal 11th, overtaken by the DRC – the horror, the horror! – with only Zimbabwe and Tanzania ranked lower.

One of the striking things about this steep decline is that it comes against the backdrop of record earnings for producers of PGMs (platinum group metals). And the biggest source of PGMs is South Africa.

Gold producers have also churned out huge profits. This is because, for a range of reasons, prices have been on a tear. Gold has been lifted by its safe-haven appeal during a time of upheaval, while there are shortages of key PGMs, notably palladium and rhodium, coveted for their role as petrol catalysts.

One of the upshots of this state of affairs is that mining companies actually paid more in taxes in 2020 than they did in 2019. This contributed to the better-than-expected revenue collection for the current financial year which Mboweni reported. Among the surprises in the Budget was a cut in the corporate tax rate to 27% from 28% – if one of your key industries is generating more tax revenue, you can afford to reduce the tax burden.

One of the goals of a tax cut, especially a corporate one, is to attract outside investment. Yet this will likely do little to entice fresh mining capital to South African shores. Mining houses here are posting record earnings and shareholders are being rewarded handsomely with dividends, and yet the industry’s perceptions of South Africa as an investment destination are souring. How does one square soaring profits with dimming investment prospects?

The cash flowing from South Africa’s mines is from existing operations, and the expansion plans announced this week by a number of companies, including Kumba Iron Ore, Sibanye-Stillwater and Impala Platinum, are all extensions to existing mines. Yet in the long run, you need exploration or you won’t get new mines and new investment. And South Africa now accounts for less than 1% of global exploration expenditure.

Many factors are at play here. The massive profits that South African PGM, iron ore and gold producers are spinning now were almost inconceivable a few years ago when labour unrest, depressed prices and steeply rising costs were the order of the day. That stunted investment plans for years.

Costs and labour unrest have since been contained, while prices have gone through the roof. But policy uncertainty and shoddy governance persist.

A few hours before Mboweni spoke on Wednesday, the Department of Mineral Resources gave a presentation to Parliament on its licensing system. It revealed a backlog of 5,326 applications for mining rights, prospecting rights, mining permits, renewals and cessions or the sale of rights. The backlog for prospecting rights alone was 2,485.

“I had low expectations but this shocked me to my core,” Paul Miller, director of mining consultancy AmaranthCX, told DM168. “This will take more than a decade at normal historical pre-Covid processing rates to clear. It’s not unusual for renewals of prospecting rights to take seven to 10 years.”

Who wants to start an exploration project in that kind of regulatory climate?

And then there are the usual suspects: the unreliability of Eskom and its rising rates, changing goalposts with each new version of the Mining Charter, endless procurement targets, social and labour plans that must be approved, social unrest that has been exacerbated by the government’s failure to provide basic services, the wider economy’s failure to create jobs, and on and on.

South Africa’s mining industry may seem like it’s coining it now, but that doesn’t mean there will be an industry left to coin it in 20 years’ time. DM168