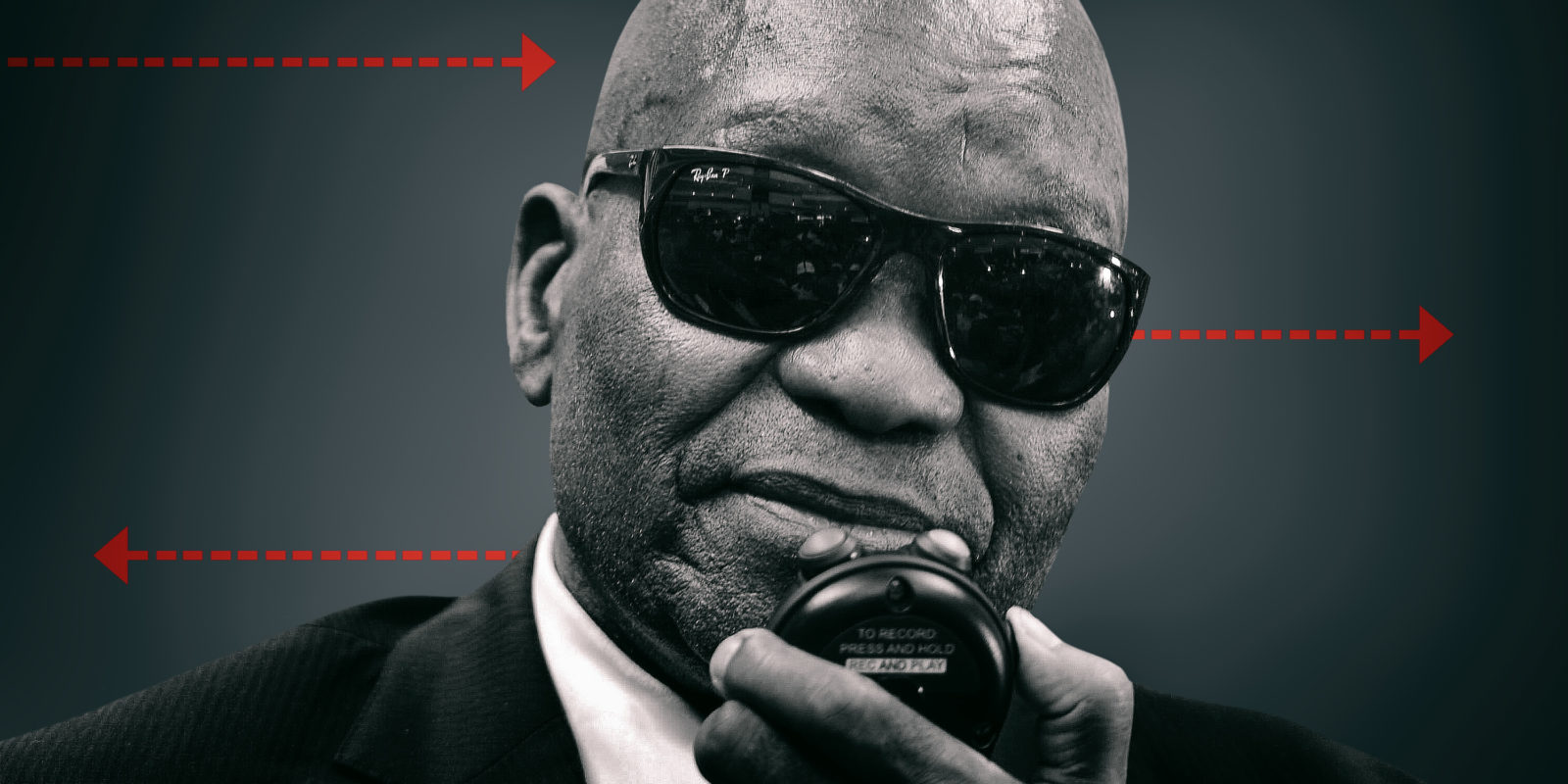 Buried in the court application is a footnote that indicates the commission is still willing to forgive Zuma for his multiple acts of defiance and will shuffle its tight timetable to accommodate the former head of state.

The Commission of Inquiry into State Capture announced on Monday in a headline-grabbing Constitutional Court application that it wanted that court to have former president Jacob Zuma jailed for two years for contempt following his defiance of its order instructing him to appear before the commission.

But the commission also added in small print a scenario allowing for kicking the proverbial can down the road via its application.

An affidavit filed as part of the application made by the secretary of the commission, Itumeleng Mosala, is loaded with strong language, such as the need to “defend the judiciary as a whole against Mr Zuma’s unwarranted attacks”.

But buried in the detail is a footnote that indicates the commission is still willing to forgive Zuma for his multiple acts of defiance, and will shuffle its tight timetable to accommodate the former head of state, who by evidence leader advocate Paul Pretorius’s own admittance has been implicated in questionable acts by 40 witnesses.

Stripped of its bravado, the application could be compared to President Cyril Ramaphosa’s comments about giving Zuma “time and space” to think his actions through.

Zuma and his growing army or surrogates, including former friend, then foe, then tea partner, Julius Malema, have in recent weeks taken several nasty swipes at the judiciary, claiming it has been politicised and corrupted.

In Zuma’s 1 February statement about his reasons for not attending the commission, he claimed it had set up a “special and different set of circumstances specifically designed to deal with Zuma”.

It must be remembered that the terms of reference for the commission clearly state Zuma is being investigated for his alleged role, if any, in the massive corruption racket involving the now infamous Gupta family.

Nevertheless, there are some eye-watering quotes in the application, which also names Minister of Police Bheki Cele and National Police Commissioner General Khehla Sitole as respondents.

In the notice of motion, the commission asked that “Mr Jacob Gedleyihlekisa Zuma is sentenced to imprisonment for a term of two years” for being “guilty of contempt of court” for not appearing before the commission between 15 and 19 February.

It further stated that Zuma, “Intentionally and unlawfully failed to appear before the judicial commission of inquiry… on 15 to 19 February 2021 in compliance with summons issued… on 30 November 2020”, which was affirmed by the Constitutional Court on 28 January 2021.

Also, Zuma had “intentionally and unlawfully failed or refused to furnish the commission with affidavits in compliance with the directives issued by the… commission”.

The commission said it cited Cele and Sitole to “give effect to the order”.

Cele made his way through the 25 or so MKMVA “soldiers” braaing outside Zuma’s Nkandla homestead on Thursday last week — stationed there to “protect” Zuma from potential arrest — to visit the former head of state, ostensibly to persuade him to refrain from exhibiting constitutionally delinquent tendencies. But Cele has remained tight-lipped about what was actually discussed.

Nevertheless, in Mosala’s 29-page founding affidavit, submitted with 175 pages of annexures ranging from the various summonses issued to the Constitutional Court judgment, and including commission transcripts, he said the January order by the apex court “specifically and unambiguously directed Mr Zuma to comply with the summonses and directives issued by the Commission”.

Mosala said the application made on Monday was the earliest possible date it could be brought before the court, after Zuma’s no-show last week.

“The application is brought immediately after the last day of the contempt of court, being 19 February 2021.”

“The seriousness of the threat that Mr Zuma’s conduct poses to public trust in, and respect for, the authority of the courts and the rule of law requires this court to intervene and assert its authority without delay.

“As a former president… Mr Zuma is expected to set an example by his words and conduct. He has the position and influence to do so, as others look up to him as a leader. When Mr Zuma undermines the integrity and authority of this court, and the judicial system as a whole, there is a grave risk that he will inspire others to do so and then that rule of law will be fundamentally weakened.”

Due to Zuma’s stature in society and the “public and forceful nature of his defiance and attack on the judiciary” which poses an “extraordinary and potentially grave threat to the rule of law”, the matter needed to be heard on an urgent basis as “the interests of justice require a swift response”, continued Mosala.

“I submit that particularly where someone has held the highest public office, such as Mr Zuma, [and] has defied an order of court, an application for contempt of court should be heard urgently. A delay in hearing the application means a delay in the court vindicating its honour and authority and may result in more acts of defiance of court orders by others, in the belief that court orders may be defied with impunity.”

It is clear that the commission needs to be viewed as being tough on a defiant high-profile individual whose actions could influence society.

Mosala raises this argument at least twice, stating, “the commission seeks an order of direct imprisonment”, and then again, he states: “the commission does not seek a suspended order of committal”.

But then comes this:

“Should this court be inclined to grant a suspension of the order of imprisonment on condition that Mr Zuma appears and gives evidence before the commission and submits his affidavits… the commission would need to make appropriate logistical arrangements. For such relief to be possible and effective, a special arrangement would need to be made to hear Mr Zuma’s evidence before 31 March 2021.”

Numerous calls and texts from Daily Maverick to ANC Secretary-General Ace Magashule and Deputy Secretary-General Jessie Duarte about the planned meeting between the party’s top six and Zuma about his refusal to appear before the commission, went unanswered, as did attempts to get hold of Zuma.

The deadline date of 31 March becomes a bit fuzzier when reading a footnote in the affidavit where it is explained that the commission has applied for another extension, until June.

It is also stated that the ConCourt “may yet deem it appropriate to suspend such an order, if the court is of the view that Mr Zuma should be afforded a final opportunity to comply with its order before he can be imprisoned”.

These are important qualifications, as they signal to Zuma, who is pivotal to clarifying the allegations made by the aforementioned 40 witnesses, that he is being given an opportunity to negotiate new dates for his appearance if he so wishes.

If not, Mosala points out that the two-year custodial sentence being sought — which in reality would never be fully served, if at all — is light in comparison to the sentence that would be imposed by a criminal court.

“The sentence sought in these contempt of court proceedings appropriately reflects the views of the legislature and the executive as to the appropriate sentences for this type of conduct that is at issue here. In this regard, it must be taken into account that on each day — of the five days reserved — that Mr Zuma failed to appear, he was committing a new offence of violating the summons.”

In a criminal court — according to Mosala — the appropriate sentence would have factored in each day of non-appearance as a separate violation of the summons. Sentences, he said, would also be issued for failing to submit affidavits and ignoring directives.

“Mr Zuma would, in a criminal court, in fact be liable to a combined period of four years and six months if he had been tried and sentenced to the maximum period allowed.”

Numerous calls and texts from Daily Maverick to ANC Secretary-General Ace Magashule and Deputy Secretary-General Jessie Duarte about the planned meeting between the party’s top six and Zuma about his refusal to appear before the commission, went unanswered, as did attempts to get hold of Zuma.

However, the secretary of the ANC in KZN, Mdumiseni Ntuli, told Daily Maverick that that meeting was initially set to take place at Luthuli House on Monday. “But on Saturday [Zuma] phoned me to say he had to meet with his lawyers on Monday for the case on Tuesday.”

The case being referred to is the so-called arms deal graft matter, which dates back to the 1990s. Zuma is not expected to appear in person at the Pietermaritzburg High Court on Tuesday, where a date is being sought for the matter to come to trial. This is after his co-accused, Thales, stated it would not be appealing against its losing bid to have the racketeering charges it faces be dismissed.

Nevertheless, Ntuli told Daily Maverick that he and ANC KZN chairman (and current premier) Sihle Zikalala were supposed to be part of the aborted top six meeting.

“When the [Monday meeting was cancelled because of Zuma having to meet with his lawyers] I left it to the office of the secretary-general to coordinate a new date.”

Ntuli said the meeting may take place before the end of the week, “or it may have to wait until Monday. It will depend on the schedule of President Cyril Ramaphosa.”

Asked about the Zondo Commission’s application, Ntuli said he had been forwarded the document, but had not yet “read the whole thing”.

He added, however, that if the commission had made it possible in its application for Zuma to have another chance at testifying, that would be “a good thing”.

“When the commission made a decision earlier on that they were intending to take up the matter with the Constitutional Court and seeking for a decision of imprisonment, I was worried about that, because I thought, here again, Zondo and his team are positioning themselves in a way that would show a conflict of interest.

“But if, as you are saying, in the formal papers, they are still trying to ask the Constitutional Court to force him to come, that is reasonable… he has been given a lifeline.

“I am quite confident that the meeting with the national officials should emerge with some kind of a conclusion that avoids the current stalemate. The stalemate is not in the interests of the ANC, let alone our country. It is quite bad for our democratic system, but it is extremely dangerous and detrimental to the future of the ANC.” DM