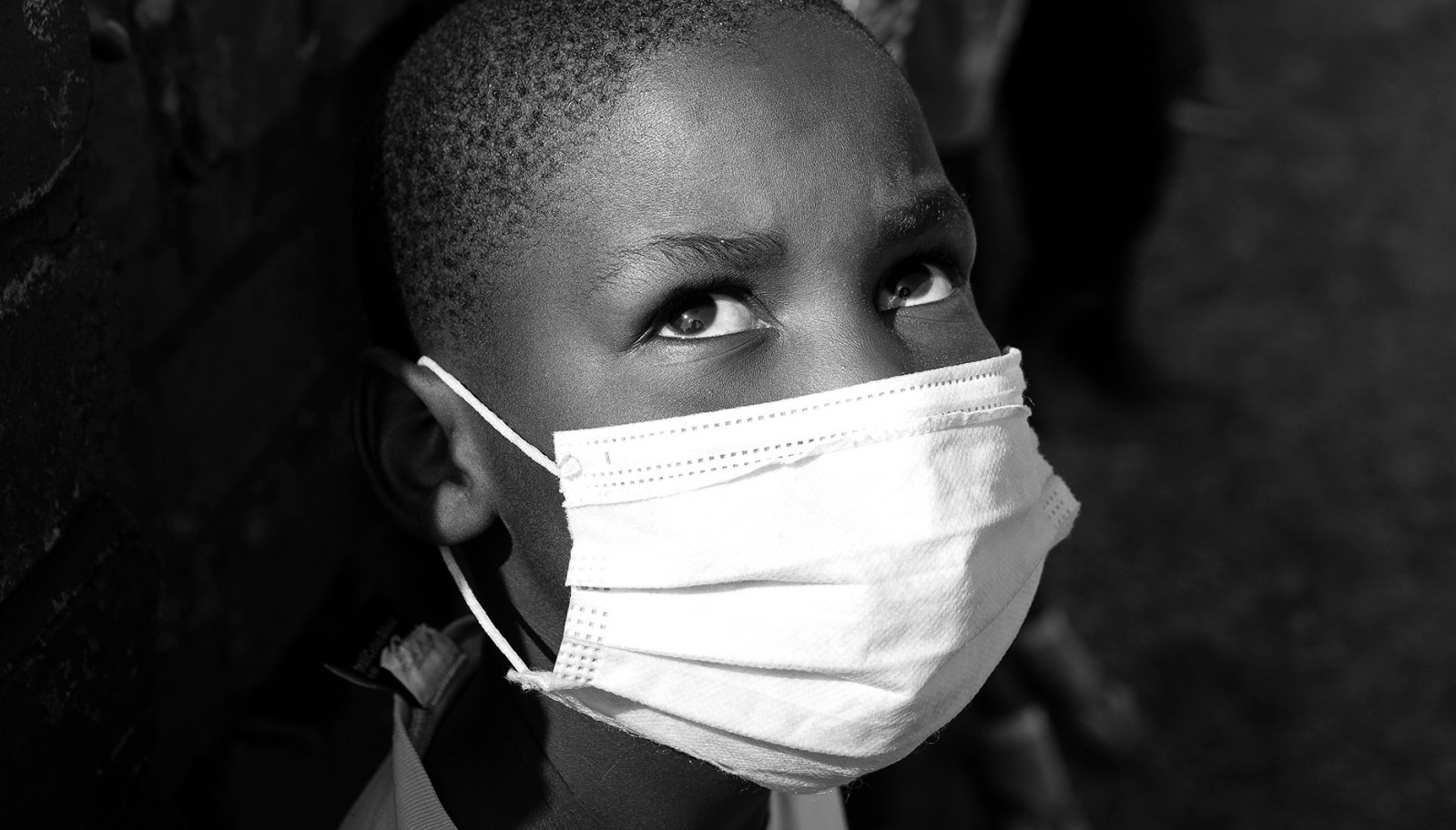 Young children wear face masks as they wait to receive food donations without their parents during a food handout in Johannesburg, South Africa, 20 May 2020. Food insecurity is one of the main issues facing the country since the start of the lockdown imposed on 30 April 2020 in a bid to slow down the spread of the pandemic COVID-19 disease caused by the SARS-CoV-2 coronavirus. South Africa remains on level 4 in the lockdown's 56th consecutive day. (Photo: EPA-EFE/KIM LUDBROOK)

Ultimately it seems the only way to abolish the harmful politics above us is by actions taken in the spaces all around us. To build new norms and a new culture. Children and young people must be at the centre of these efforts.

For my sins, I am rereading Jude the Obscure, a novel written in 1895 by the English author Thomas Hardy. It contains one of the most dramatic scenes in English literature, where a young boy hangs his two infant siblings and then kills himself, leaving a note to his parents with the words: “Done because we are too menny.”

The killings took place in a fictionalised town, closely based on Oxford University, where inequality between haves and have-nots was at its starkest. The “reason” for the killing was that the young boy was traumatised by the adult world around him; his parents were poverty stricken, unemployed and about to be evicted from their temporary shelter.

This haunting scene, and the child’s clumsy epitaph, has stayed with me since I read it first when I myself was a student at Oxford. But what makes it most shocking is, rereading it on the eve of yet another World Day of Social Justice on 20 February, it’s clear that when it comes to poverty, inequality and their impact on children, very little has progressed in the past 130 years.

A few pages earlier in the book, its tragic hero, Jude, had told a crowd gathered to watch a university ceremony that “I perceive there is something wrong somewhere in our social formulas”.

We must say the same of today.

Hardy wrote at a time when the world was in the midst of what became known as the gilded age, associated with a massive growth in inequality. Today, as Thomas Piketty has shown, we sit squarely in a similar age, and now Covid-19 is proving the great accelerator and exacerbator.

My reading also happens to coincide with Teen Suicide Prevention Week in South Africa – did you lnow 9% of all teen deaths are caused by suicide?;  the launch of the 2o20 annual Child Gauge report focusing on food and nutrition security, what the authors call “the slow violence of malnutrition”; and a heartrending story of four boys suffocating to death while playing on the side of the N2 in Cape Town, the day before the presidential cavalcade sped past the spot on its way to the State of the Nation Address (Sona). Blue lights blazing.

These issues are the tip of the iceberg.

At a more mundane level, 20 girls who make up a football team in Umtata, set up to help keep girls off the street, are having their dreams broken because they don’t have balls or jerseys or shoes so they can’t play this year. This after a break-in at the church where their equipment was stored for the holidays.

If how we regard and treat children is a litmus test for the strength of our civilisation and social justice then we are very uncivilised and socially unjust indeed.

Each year, the gap between our reality and our aspirations seems to grow ever wider. It makes you wonder whether, when the United Nations General Assembly decided to commemorate one day every year as the World Day of Social Justice, it was just a cruel taunting of the billions of victims of social injustice, dangling a promise that will never be fulfilled.

Some might say the same of the claim in our Constitution’s Preamble that it will serve as an instrument to “establish a society based on democratic values, social justice and fundamental human rights”.

This year marks the 25th anniversary of the signing of the Constitution. It instructs that “A child’s best interests are of paramount importance in every matter concerning the child” and that children have immediate rights to “basic education, basic nutrition, basic healthcare services”. And yet children, 35% of our population, were not mentioned in this year’s Sona.

However, we must also recognise that – as it was 130 years ago, as it always will be – the suffering of children is inextricable from the pain, humiliation, indignity, anxiety and suffering unintentionally conducted to them by their parents, something that will be highlighted once again when the latest NIDS-CRAM report is made public on Wednesday.

This is not just a government problem. All people with power are complicit because this suffering is interwoven into our “social formula” and yet we do nothing.

So what can be done?

One thing that is becoming more and more evident is that waiting for governments, the United Nations or a change of heart from the elites will be a waste of time.

It’s not going to happen.

However, one of the unique things that has happened in communities across the globe as a result of the Covid-19 pandemic is the flowering of literally millions of initiatives that involve people working together to take things into their own hands and build systems based on care and community; rebuilding food systems from below; rebuilding education systems from below; starting new systems that include rather than exclude; organising social justice at a neighbourhood level.

Change must start outside your front door, if you are lucky enough to have one.

This year, Maverick Citizen will seek to tell the stories of as many of these initiatives as we can. Not only in South Africa, but internationally. Ultimately it seems the only way to abolish the harmful politics above us, is by actions taken in the spaces all around us. To cease being blind or numb to suffering and to build new norms and a new culture. Children and young people must be at the centre of these efforts. Not for them, but with them and led by them.