When four children die in a sinkhole in Nyanga, who is responsible? 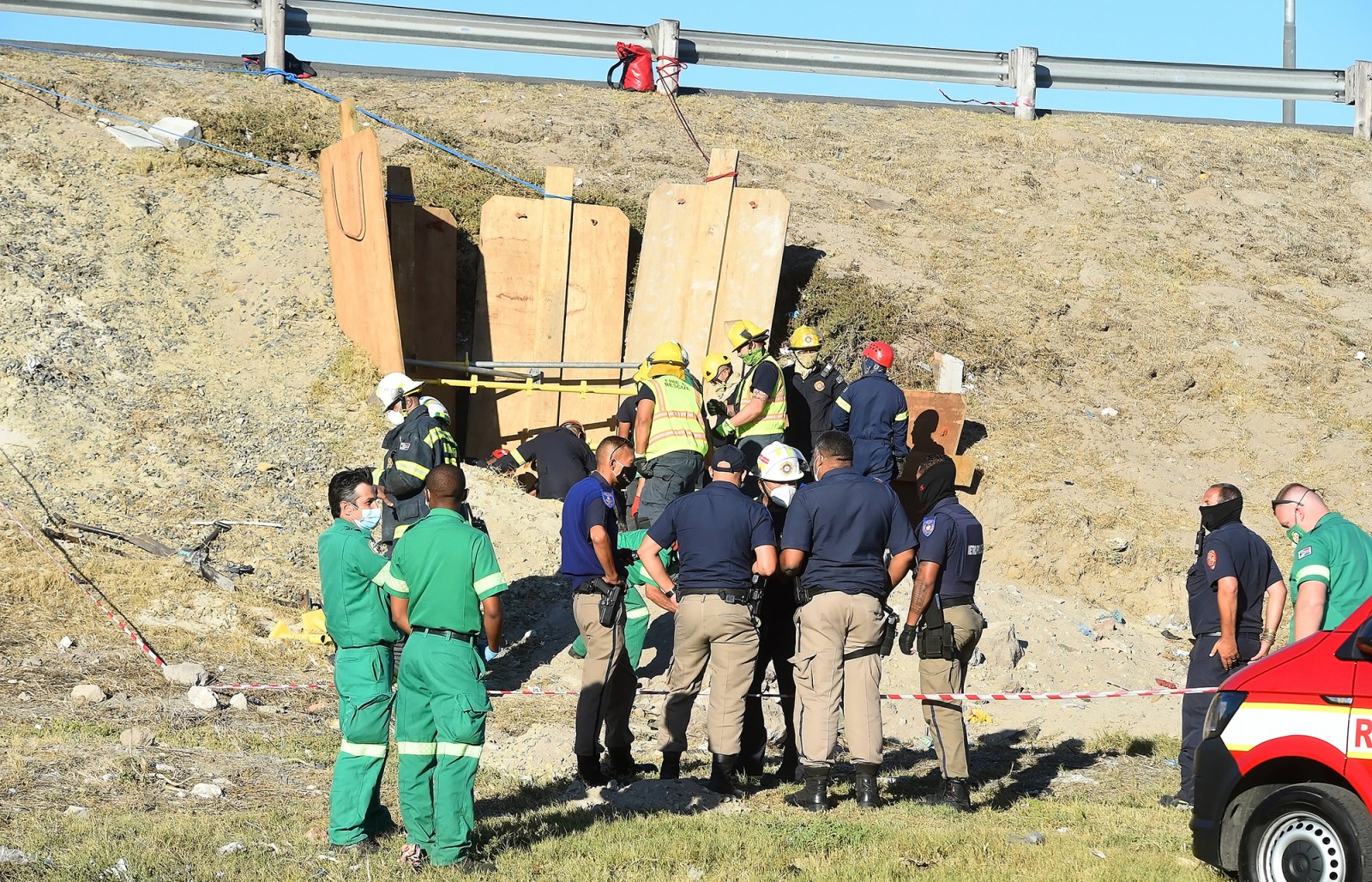 Rescue teams together with police are on the scene trying to retrieve bodies of four young boys that were trapped and killed when playing on a sand that caved in while playing near Borchard's quary in Nyanga.The young boys names are Nqabayethu Mlaza,Axolile Mabangula,Azola Quweni and Ivakele Kalikopu . Picture: Xabiso Mkhabela

Politicians have been quick to offer condolences, even quicker to deny blame.

Correction: In Saturday’s DM168 article as well as an article published on Daily Maverick online: “When four children die in a sinkhole in Nyanga, who is responsible?”, we incorrectly reported that Cape Town Executive Mayor Dan Plato said on eNCA that the children should have been playing elsewhere. He did not make such a statement to eNCA. We apologize for this error.
What the Mayor did say on eNCA was that the people who dug the hole to mine sand “should have known” that children would be curious and want to play there.
It was reported by Daily Voice’s Velani Ludidi that Plato said the children should have been playing elsewhere. In a video of Plato standing at the site of the incident, published by Daily Voice, Plato says that there are many other parks and play areas in the area for children to play in.
News24’s Jenni Evans reported that when asked for clarity on Ludidi’s report, the City of Cape Town’s mayoral media officer Lyndon Khan said: “As quoted in the article, Mayor Dan Plato said there are sports fields nearby that could be used for recreation purposes.”
In response to DM168’s question: “Mayor Dan Plato has said that the kids should rather be playing in other recreational facilities. Could you please identify which of these facilities are feasible for families living in the Europe informal settlement, i.e. walking distance for kids from that area? The family members and community members we spoke to dispute that any such facilities exist.”. In their response, the City did not deny Plato’s words and identified three recreational areas in the vicinity.

This was their response:

“The City has assessed Nyanga over time to identify areas where recreational facilities can be developed. Unfortunately, there isn’t much additional space to develop amenities (particularly in Lusaka in Ward 39), as every potential space has been prioritised for housing opportunities.
There are also no vacant public open spaces in and around that area, which is one of the reasons that a section of the cemetery is earmarked for future development of a park to cater for Lusaka and Barcelona.
Many children living in this area currently make use of the NY 131/111 park, which has play and gym equipment. The park is approximately 700m away, well within walking distance. In Lusaka there is also Miller’s Camp Hall and Millers Camp Sports Field which is available for local recreational and sports programmes.”
That the city was shifting blame to the community members and the children’s behavior is an interpretation by the writers of the piece and should have been indicated as such.

Amid politics and a media furore, the families of four children who suffocated in a sinkhole on Borcherds’ Quarry Road in Cape Town want answers – and change.

On Wednesday, the family of Axolile Mabangula, 11, sat gathered inside their small house in Europe informal settlement in Gugulethu, Cape Town. Here they have been receiving visits from well-wishers, pastors, journalists and politicians.

The grief hung in the air. It had only been two days since Axolile and three of his friends, Nqabayethu Mlaza, 12, Azola Quweni, 13, and Iva Kalikopu, 13, died when a hole they were playing in collapsed on to them.

The area next to the N2 highway had been used by community members for sand to fortify their shacks, creating a cave-like hole perfect for playing iMbhoma, a game in which children build a makeshift house.

Tears still streaming down their faces, Axolile’s family members agreed to talk to us. Their foremost priority is to bury the children in the Eastern Cape. In Xhosa culture, it is believed that family members should be buried in the same place to avoid spiritual conflict. Some, including the City of Cape Town, have offered to pay for the funeral, which is set to happen next week.

Since Monday, the victims of the families have been visited by Cape Town Mayor Dan Plato, Deputy Minister of State Security Zizi Kodwa, Human Settlements Minister Lindiwe Sisulu, and Social Development Minister Lindiwe Zulu. The incident has been widely reported across the country’s media. The families have been offered counselling by the City of Cape Town and the Western Cape Department of Transport and Public Works.

But, thus far, no one has accepted responsibility for the incident. Instead, high-profile visitors have taken the opportunity to blame others for what happened. Kodwa called the incident “a lesson for the Western Cape government”.

“This is not a time for politics,” Pastor Zipho Slara, Axolile’s uncle, told DM168. He was disgusted by a verbal altercation that allegedly took place on Tuesday between Plato and ANC ward councillor Khaya Yozi outside the family’s home.

And, though there have been promises of financial support, he has little faith they will materialise. Attributing the political interest to the upcoming by-elections, he said that, “when it comes to service delivery, they fail us”. Mrs Slara, Slara’s wife, said that the family wanted change. There needed to be safe spaces for kids to play, she said. The nearest park is too far and the only open fields are alongside the N2. Those areas should be shut so that children cannot access them.

A community leader of the Vukusenzela Lusaka settlement and an assistant to the ward councillor, Wandile Ngalo, tears up as he recounts Monday’s events. He has made it his priority to ensure the family receives the support they need, facilitating back-to-back meetings with stakeholders.

Ngalo acknowledges that there is not really enough space to create play areas, which is why proper housing is necessary. If there is proper housing, play areas can be included in the plans, he says.

Africa United, a human rights advocacy group that runs a supplemental schooling programme three of the children would have attended if it had not closed because Covid-19, is outraged by the city’s blame-shifting statements.

Project co-ordinator Abongile Naconda says they plan to make a noise to advocate safer spaces for children to play in.

Various issues caused Monday’s incident. There are no safe spaces for children to play in, no safety measures to protect children from dangerous areas, and no law enforcement to prosecute people who steal sand from next to the freeway.

The Constitution promises safety and sufficient housing for all South Africans, and there is a strong view that the provincial and national governments should be held accountable for neglecting their constitutional mandates.

Western Cape Minister of Transport and Public Works Bonginkosi Madikizela said on Thursday that a full investigation was under way. Although Madikizela’s department undertakes weekly inspections of the road, its purpose is “to ensure safety for road users”. Theft of sand from the roadside should be policed by the SAPS, his statement said.

Monday’s incident in Nyanga could have happened in any township, informal settlement, or undeveloped rural area in South Africa. But ANC and EFF politicians have attempted to absolve themselves from any responsibility.

Asked by DM168 whether it accepted any accountability for what happened, the City of Cape Town declined to answer. According to the Constitution, the object of local government – in this case the City of Cape Town – is “to ensure the provision of services to communities in a sustainable manner … to promote social and economic development … [and] to promote a safe and healthy environment”. Instead, the city has blamed  members of the community for digging there.

In response to DM168’s questions, the city emphasised that the site of the incident was not under its jurisdiction and that there were spaces available for children to play.

According to Mayoral Committee Member for Community Services and Health Zahid Badroodien, the city has earmarked a section of the cemetery for future development of a park.

The South African National Roads Agency (Sanral) said the incident did not happen on one of its roads.

“This is, however, an opportunity for all roleplayers … to learn from this tragedy and work towards preventing similar incidents from happening in the future,” said Randall Cable, Sanral’s western region manager.

While condolences have been made, and the funerals may be paid for, the families will forever experience the loss of their young boys. It is time for South Africans and the government to take seriously not only the safety of children but the widespread effects of governmental failure. It should not be accepted that, in a society in which the poor bear the brunt of economic stagnation and inadequate governance, the poor are blamed for the consequences. DM168