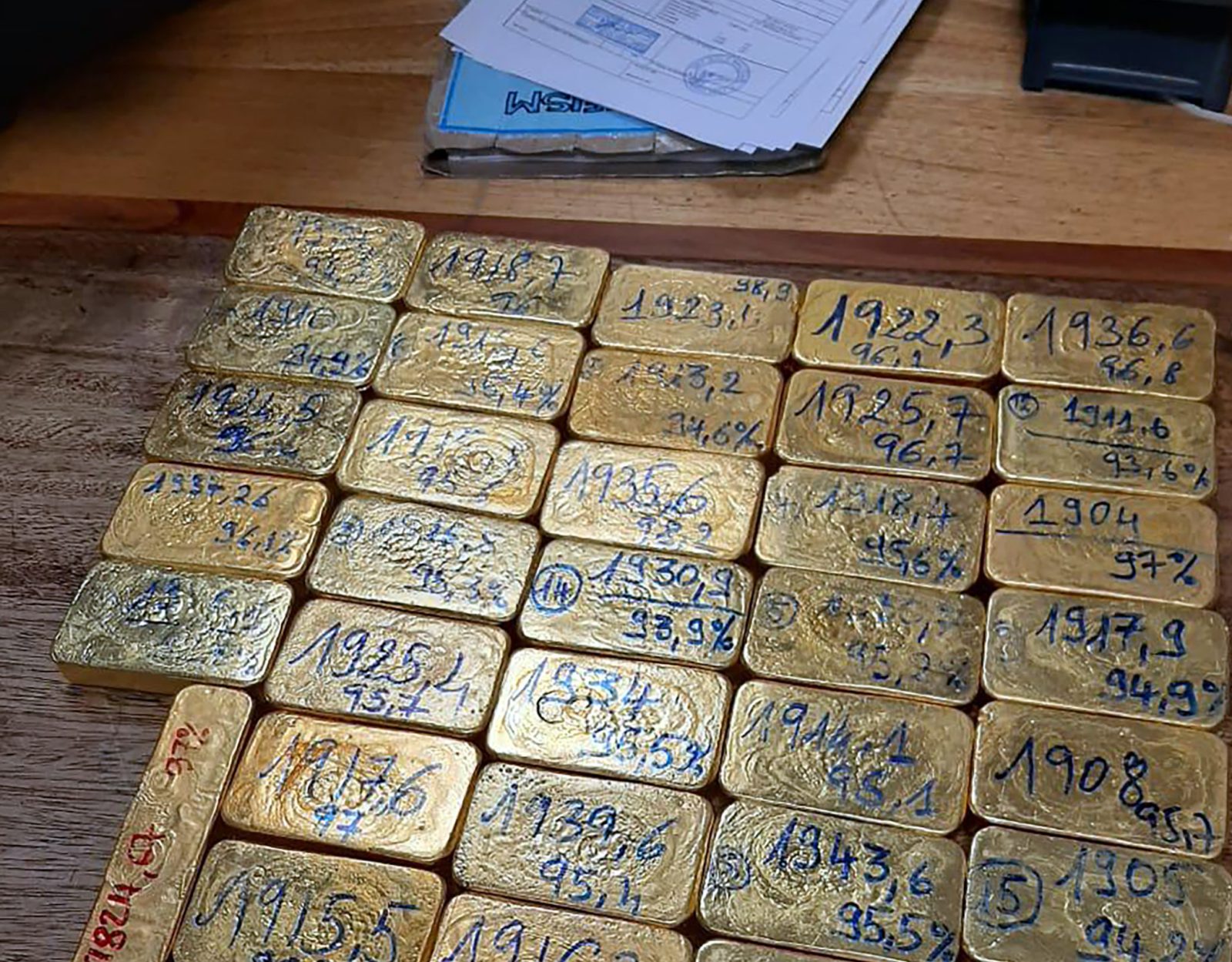 Three suspects travelling from Madagascar were arrested at OR Tambo International Airport in January 2021 when gold bars weighing 73.5kg were found in their hand luggage. Government ministers in Madagascar apparently want the gold, the centre of an international investigation, sent to their country and the suspects extradited. (Photo: SAPS)

Daily Maverick 168 reported last month that gold smugglers were using South Africa as a transit route as they made their way to and from Dubai. A Dubai authority has since announced it has flagged this problem and will look at more ways of tackling it.

Dubai, one of the world’s most prolific players in the gold industry, is assessing plans to see how it can further clamp down on smugglers bringing illicit forms of the precious metal into its country.

This, after Daily Maverick 168 reported last month on how there was a clear link between South Africa and Dubai as a part of a gold smuggling route.

It was reported that over five years, five sets of arrests were carried out at airports in South Africa involving travellers flying either to or from Dubai. They were found in possession of gold bars.

In the latest arrests, three suspects travelling from Madagascar on their way to Dubai were detained at OR International Airport at the start of the year after gold bars weighing 73.5kg, and worth about R67.5-million, were allegedly discovered in their hand luggage.

About a week ago, Ahmed Bin Sulayem, the chief executive officer of the Dubai Multi Commodities Centre (DMCC) – described on its website as a government entity “to enhance commodity trade flows through Dubai” – posted a statement on LinkedIn in apparent reaction to, and referencing, the Daily Maverick 168 article.

He said gold smuggling into Dubai was not as easy as some suggested, and referred to a federal law that stipulated “those involved in the dealing of precious metal or precious stone jewellery without proper hallmarking or certification from authorised institutions will be imprisoned for one year” or fined between roughly R100-million (AED250,000) and R200-million (AED500,000)

“Over the past few years alone, Dubai police have been extremely effective in arresting and prosecuting gold smugglers attempting to either import, export or use the city as a place of transit for illicit means,” Bin Sulayem said.

“Only a few months ago, Dubai police busted a smuggling operation that was using diplomatic baggage as a way of carrying out its activities from Dubai to India.”

He said that because most smugglers preferred to travel via air, “I revisited an idea I had shared publicly at the second DMCC Africa Dubai Precious Metals Forum, held in Accra in 2016, where I openly called for all airlines to place a ban on the hand-carriage of gold.”

“The adoption of a ‘cargo-only’ policy would almost certainly be a giant leap towards solving this issue, not just between Africa and Dubai, but for the wider, global industry.”

Iata spokesperson for Africa and the Middle East, Katherine Kaczynska, told Daily Maverick it was up to governments to regulate this area.

“We do work with our members on illicit trade (i.e. wildlife) so we will certainly take up a discussion with DMCC on how best we can work with authorities to efficiently implement existing government regulations on the carriage of gold,” she said.

“It is not, however, Iata’s place to develop a policy such as the cargo-only proposal.”

To further tighten its controls over gold, Dubai was working with the London Bullion Market Association (LBMA), which describes itself as the “global authority for precious metals”.

This tallied with what the LBMA, in a statement, said it had done late last year, when it engaged 12 top international bullion centres “to improve and harmonise sourcing practices in line with industry best practices”.

“The outreach has resulted in favourable responses from all centres.”

“It would be cheap for me to point fingers at the various flaws within South Africa’s hard working border services or law enforcement agencies for not being more effective, so instead I propose that all jurisdictions that are serious about solving this problem reach out to me and join this initiative as a proactive next step,” he said.

National police spokesperson Vish Naidoo previously said that officers were responsible for trying to control the illegal movement of goods and people across all South Africa’s ports of entry – land, sea and air.

The United Arab Emirates, under which Dubai falls, is listed as a member country of Interpol. DM