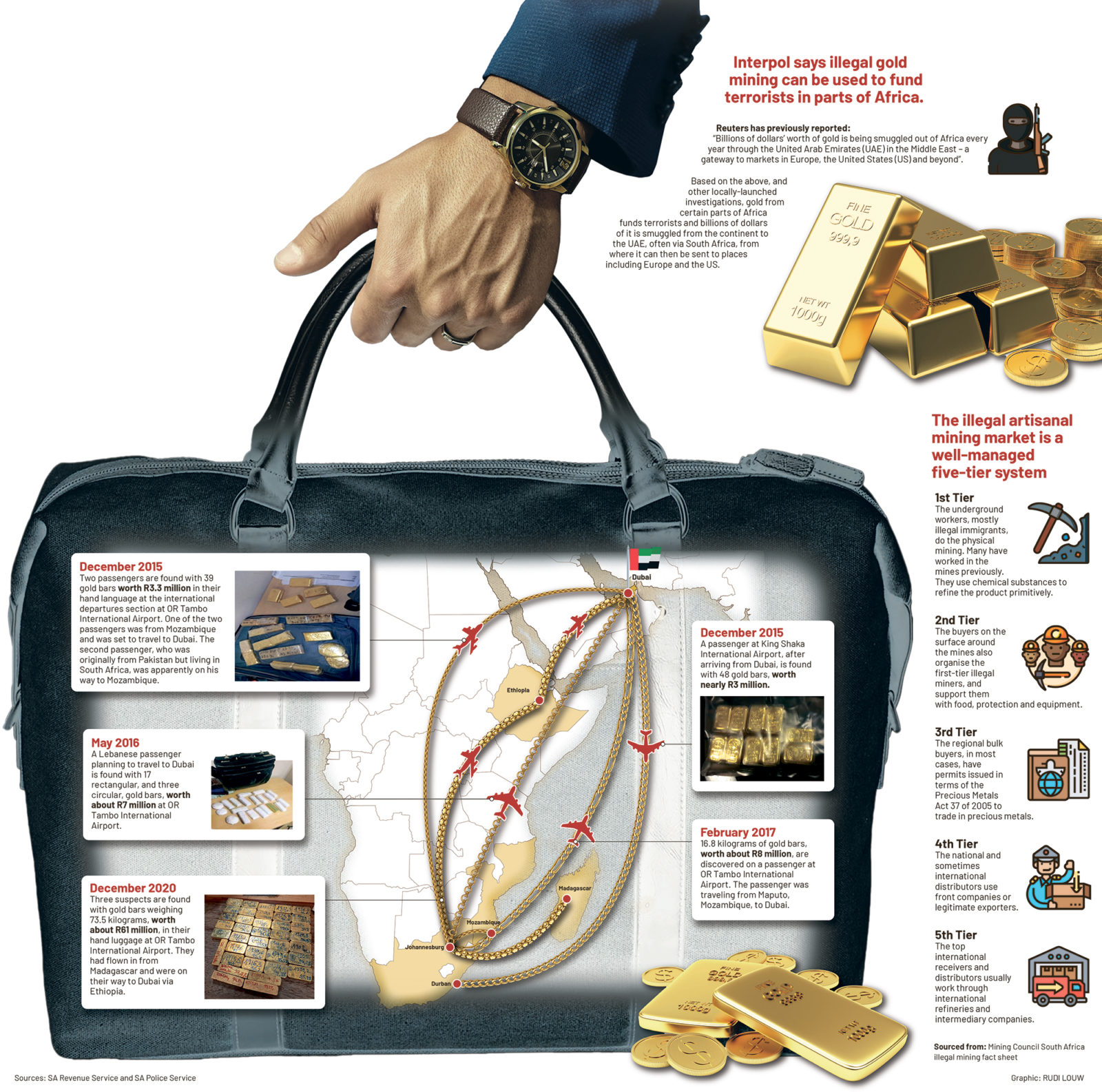 South Africa has surfaced as a key transit point for bullion smugglers wanting to channel the precious metal to and from one of the world’s most prolific players in the gold industry – Dubai.

Piecing together a number of arrests that have led to local police and South African Revenue Service (SARS) investigations, conducted over several years, a picture emerges of just how much of a cog this country has become in illicit gold networks.

Indeed, over five years, five sets of arrests have been carried out at airports in South Africa and have involved travellers, flying either to or from Dubai, intercepted with gold bars.

A fresh investigation sparked at the start of this year may also reveal whether a smuggling syndicate possibly operating from Madagascar has been using the country as a conduit.

This all means that in addition to South Africa facing problems relating to illegal gold mining within its border, it must also deal with international smugglers operating in, and passing through, it.

Marcena Hunter, a senior analyst at the Global Initiative Against Transnational Organized Crime, said in terms of illicit gold networks, “South Africa is a major cog for the southern Africa region.

“Illegal mining in the country is rife and most of Zimbabwe’s gold is still thought to go through South Africa,” she said.

“It’s hard to estimate the scale, but our past estimates have put the figures in the hundreds of millions [of] US dollars.”

A 2019 report that Hunter authored, entitled Pulling at Golden Webs: Combating Criminal Consortia in the African Artisanal and Small-scale Gold Mining and Trade Sector, said feedback from regions in Africa suggested most of the gold leaving the continent ended up in Dubai in the United Arab Emirates (UAE).

“The South African local scrap metal-to-refinery route leading to Dubai is undoubtedly the preferred route for most syndicates,” the report said.

Charmane Russell, spokesperson for the Minerals Council South Africa, said the illegal gold sector within the country alone had a major knock-on effect.

“The impact is huge and not necessarily measurable,” she said, adding that issues ranging from the safety of residents in mining towns to financial matters cropped up.

A Minerals Council South Africa position paper on artisanal and small-scale mining expanded on this.

It stated: “Often those involved in illegal mining activities in South Africa do not have access to markets, therefore all illicitly produced precious metals and stones are fed into the illicit market.

“It is in this space where an alternative and illicit economy is driven that the government also loses out on royalties, income tax and value-added tax, among other [things].”

Illegal underground miners were often undocumented migrants. On the flipside of this chain were national and international distributors who sometimes worked via front companies.

In December, Interpol flagged illegal gold mining as a source of financing for terrorist groups in parts of Africa, which means the products of these activities – gold that often ends up in other parts of the world – could indirectly contribute to terrorism.

It said, in a statement, that a weeklong operation had disrupted illicit firearm networks bolstering terrorists across West Africa and the Sahel – a region including areas from Senegal to Sudan.

“Also, more than 40,000 sticks of dynamite and detonator cords were seized across several places, all intended for illegal gold mining, which constitutes a new source of financing, and even a recruiting ground, for armed terrorist groups in the Sahel,” the statement said.

Interpol is now assisting with a separate gold investigation stemming from South Africa.

About two weeks ago, in a crackdown that spurred this latest investigation, police announced that three suspects were arrested at OR Tambo International Airport after gold bars weighing 73.5kg, and worth about R61-million, were found in their hand luggage.

They appeared in the Kempton Park Magistrate’s Court and are expected back in the dock there next month.

Meanwhile, media in Madagascar reported that two other suspects, one who was arrested in that country, were allegedly involved in the matter.

It was reported that the group was suspected of chartering a private plane from Madagascar to South Africa.

This plane reportedly took off from Ivato in Madagascar on 31 December before landing in another city there, Toliara, from where it flew to Johannesburg.

A short while later, also in December 2015, SARS announced that two passengers were detained at OR Tambo International Airport after 39 gold bars, weighing roughly 37kg, were found in one’s hand luggage.

Earlier this week Daily Maverick reported that ministers in Madagascar had indicated they wanted the gold bars seized in South Africa sent to its central bank, and the three suspects arrested here extradited there.

Police spokesperson Colonel Athlenda Mathe said that aside from South African Police Service members and Hawks officers investigating this matter, Interpol and authorities in other countries were also looking into the alleged smuggling.

This was, among other things, to determine where the gold was mined, its end destination and who else may have been involved in trying to move it across the world.

Based on SARS and police press statements, there have been several arrests, mainly at OR Tambo International Airport, of suspects travelling with gold bars over several years.

In December 2015 the revenue service announced that a passenger at Durban’s King Shaka International Airport, who – according to another press release – had been travelling from Dubai, was found with 48 gold bars.

“The gold was found in the pockets and a moneybag of a male passenger who was hiding it under a kurta worn over his clothing… Although nothing untoward was found in his luggage, the ‘bulging pockets’ under his kurta convinced an alert official to inspect further.”

A short while later, also in December 2015, SARS announced that two passengers were detained at OR Tambo International Airport after 39 gold bars, weighing roughly 37kg, were found in one’s hand luggage.

“One of the passengers, a Mozambican national, was en route to Dubai, after arriving earlier from Mozambique,” a statement said.

“It is suspected that these passengers bypassed security, probably in collaboration with airline security.”

Then, at the end of February 2017, SARS said a passenger with five gold bars, worth about R8-million, was also arrested at OR Tambo International Airport.

“The passenger was in transit from Maputo, Mozambique to Dubai,” a SARS statement said.

In July last year, in an article published by the Carnegie Endowment for International Peace, described on its website as a “foreign-policy think tank”, gold smuggling to Dubai was red-flagged.

“Dubai’s role as a financial centre and its lax regulation of the gold trade, favourable geographic position between Asia and Africa, and access to free trade zones have all contributed to Dubai’s growing reputation as a node of corruption…

“Gold travels to Dubai from all regions of Africa – basically from anywhere with an airport. Gold bound for the UAE travels overwhelmingly by air,” it said.

“Most of this gold is [carried by hand] by individual couriers, who usually carry 2kg to 20kg, with 10kg being a typical parcel.”

Gold dubiously brought into Dubai could be sold to refiners and jewellers who could transform it into a product, for example jewellery, that was accepted on the legitimate market.

It could also be smuggled out to another country to evade tax and be used as currency.

In November last year the London Bullion Market Association, which describes itself as the “global authority for precious metals,” said it had made recommendations to ensure responsible supply chains were established for international bullion centres – “identified initially as the cornerstones of the recycled gold market”.

Among the centres it identified were South Africa, the UAE, the UK, Russia, Japan and the US.

“Currently, not all [centres] operate to the same responsible sourcing standards,” the association had said.

“These inconsistencies in standards could have a significant impact on the international market should they remain unaddressed.”

Reuters had also reported that the association was threatening to stop bullion entering the mainstream market via countries including the UAE if these countries did not meet regulatory standards.

It said Dubai was the focus of this potential action.

In a responding statement posted on LinkedIn, Ahmed Bin Sulayem, the Dubai Multi Commodities Centre’s chief executive officer, said, “Where bullion is concerned, Dubai has … been able to leverage several advantages over its international competitors.

“In the same way London was historically important to the evolution of bullion trading due to trade financing, Dubai’s location and industry verticals, which include financing and logistics, [have] positioned it to be a far more convenient trading centre, positioned between Africa’s extensive resources and heavy consumer nations such as India,” he said.

Bin Sulayem labelled the London Bullion Market Association’s apparent targeting of it as an “authoritarian approach”.

“Should [it] make good on its proposed strategy, it will be the first time a market or state authority has raised the possibility of cutting off the bullion industry in a major financial centre, a ploy akin to changing the rules of Monopoly on a discretionary basis in order to keep other players off the board.”

Illegal gold mining in South Africa, and smuggling linked to the country, saddle it with yet another multifaceted problem involving international organised crime.

Last month DM168 published an article on how a string of assassinations in South Africa, which have played out over several years, pointed to the country being tightly caught up in global drug networks.

Its positioning in international gold smuggling further bolsters it on the global organised crime map. DM168