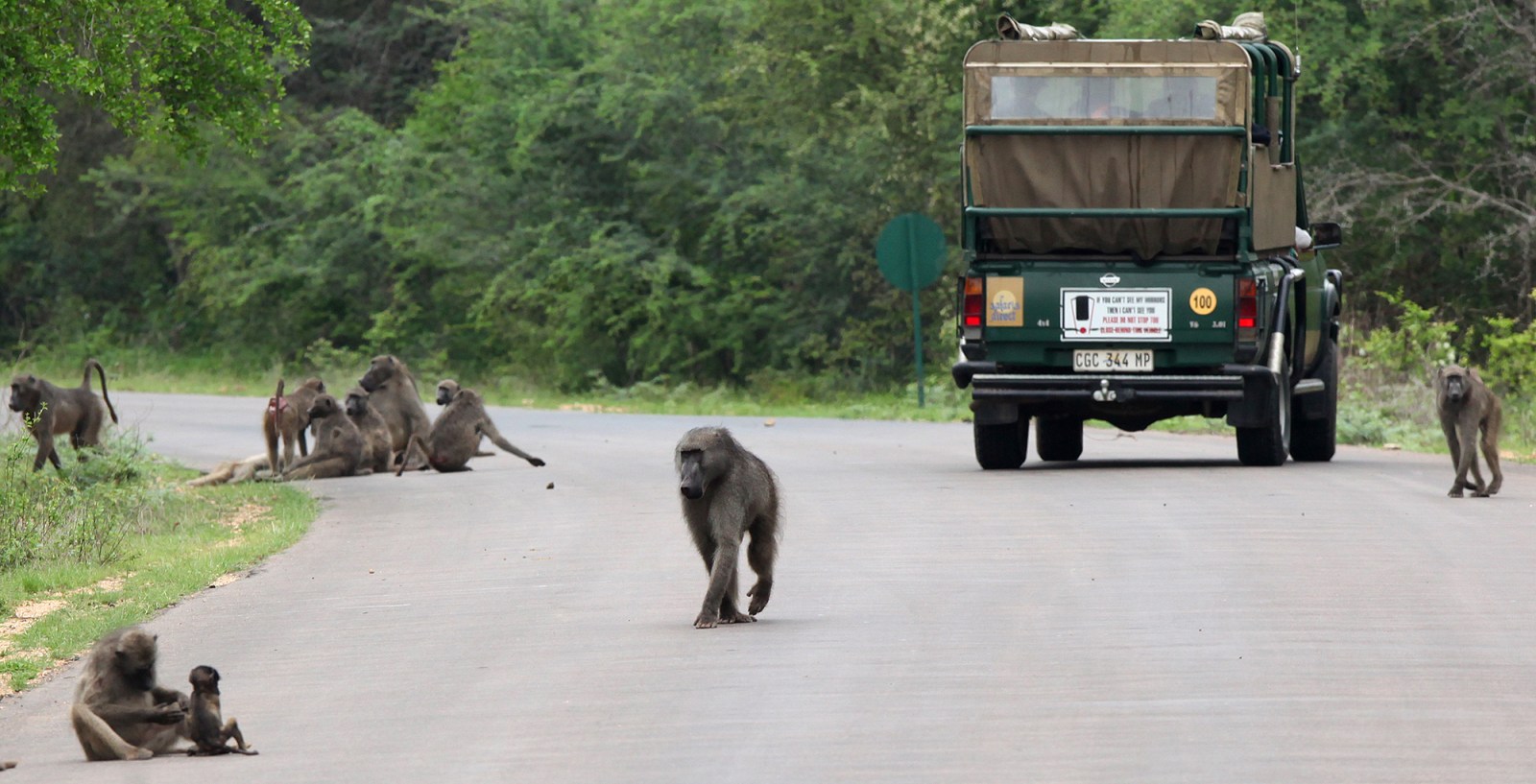 A group of baboons gather around a safari vehicle in the famous Kruger National Park.(Photo: EPA / GERNOT HENSEL)

Game reserves and national parks remain open under alert Level 3, albeit with limited services and scars from financial losses brought on by the lockdown. The tourism industry continues to take a knock from ongoing restrictions, with game parks, a massive drawcard for international travellers, doing their best to survive on revenues from local holidaymakers.

Covid-19 has continued to have a devastating effect on the local tourism industry. For the country’s beloved game reserves and national parks, the impact varies: while some are surviving, others are barely hanging on as financial losses take their toll.

The shift to alert Level 3 on 29 December 2020 saw the closure of beaches, mass cancellations and financial losses for small accommodation providers in coastal towns. But game reserves have been allowed to remain open to the public if they have existing access control measures and entry limitations in place.

South African National Parks (SANParks), which manages 19 national parks across seven provinces, said it has had to cut back on some of its service offerings to comply with restrictions.

“Accommodation facilities continued to operate as they are not affected in Level 3. However, mostly beaches, picnic sites as well as open access areas had to be closed to curb the spread of Covid-19. Our open safari vehicles for game viewing also had to load only 50% of the allowed capacity,” said Reynold Thakhuli, acting head of communications at SANParks.

Thakhuli says SANParks avoided job cuts. The organisation, which is a subsidiary of the Department of Environment, Forestry and Fisheries employs 4,107 permanent and 1,615 temporary staff.

Gondwana private game reserve on the Garden Route (a hotspot area) said minor changes had been implemented under alert Level 3, such as restricting capacity on game drives, closing restaurants by the 9pm curfew and not serving alcohol.

Next two weeks are key as Western Cape battles Covid-19

Camp manager Brendon Strydom said although the tourism industry had been hit hard by the pandemic and the loss of international visitors, part of the gap had been filled by local tourists.

“We had some locals coming through quite a bit, especially from Cape Town, and I think we were fortunate in that sense,” he said.

While some game parks are faring well under the circumstances, others are suffering huge losses. Nambiti game reserve in KwaZulu-Natal took a significant financial knock to the point where animals will eventually need to be culled as the reserve battles to feed them, according to a recent report in The Guardian.

Somkhanda Game Reserve, another game park in KwaZulu-Natal, is also in dire straits. As far back as August, the community-owned reserve began selling its impala and nyala stock for meat to mitigate financial losses from the lockdown.

According to Thakhuli, SANParks also faced financial woes. “SANParks is largely self-funded and relies significantly on tourism revenue. Therefore during the phases of lockdown where tourism facilities were not allowed to operate, SANParks was adversely impacted,” he said.

Local tourism and interprovincial travel were only reopened in late August 2020 under Level 2 restrictions. International travel resumed in mid-November 2020 under stringent health protocols.

Under present regulations, international travellers are required to provide proof of a negative Covid-19 test result taken not more than 72 hours before the date of travel. Travellers who test positive for Covid-19 must quarantine themselves at their own cost.

Tourism, which is the lifeblood of many micro and small enterprises, is set to take a further beating amid the country’s second wave of infections. The new, more infectious, strain has sounded alarm bells overseas with the UK, Germany, Switzerland, Turkey, Israel and Mauritius banning flights from South Africa.

Figures from the Department of Tourism show the sector accounts for 2.9% of GDP and supports close to 1.5 million jobs. Inbound tourism generates more than R80-billion in direct foreign spend.

The Department’s Tourism Recovery Plan published in August 2020 estimated R54.2-billion in losses between February and May with a further R149.7-billion in losses projected for the remainder of 2020 —and 438,000 job cuts.

A July 2020 report from Wesgro and the Game Lodge Industry Group touted investment into private game lodges as a safe means to keep these businesses open while keeping local tourists safe.

“The lodge experience is largely outdoors and in the open air, for dining, walking and observing game and open game vehicle drives. Adhering to the protocols, open vehicles will ensure unconnected individuals are not seated together,” the report read.

As Ray Hartley and Greg Mills write in a Daily Maverick op-ed:

Allowing domestic visits to lodges would help sustain this industry which is a vital cornerstone of the larger tourism industry with 45% of overseas visitors to South Africa enjoying wildlife experiences in 2018.

But it’s not all bad news. Strydom from Gondwana said reduced human foot traffic during the lockdown saw new (and old) creatures venturing into the game reserve.

“We had a brown hyena that actually made its way on to the property coming from the Langeberg mountains during this whole lockdown. The reduced movement of people allowed for some animals to come back so we have some great stories about our conservation side.” DM