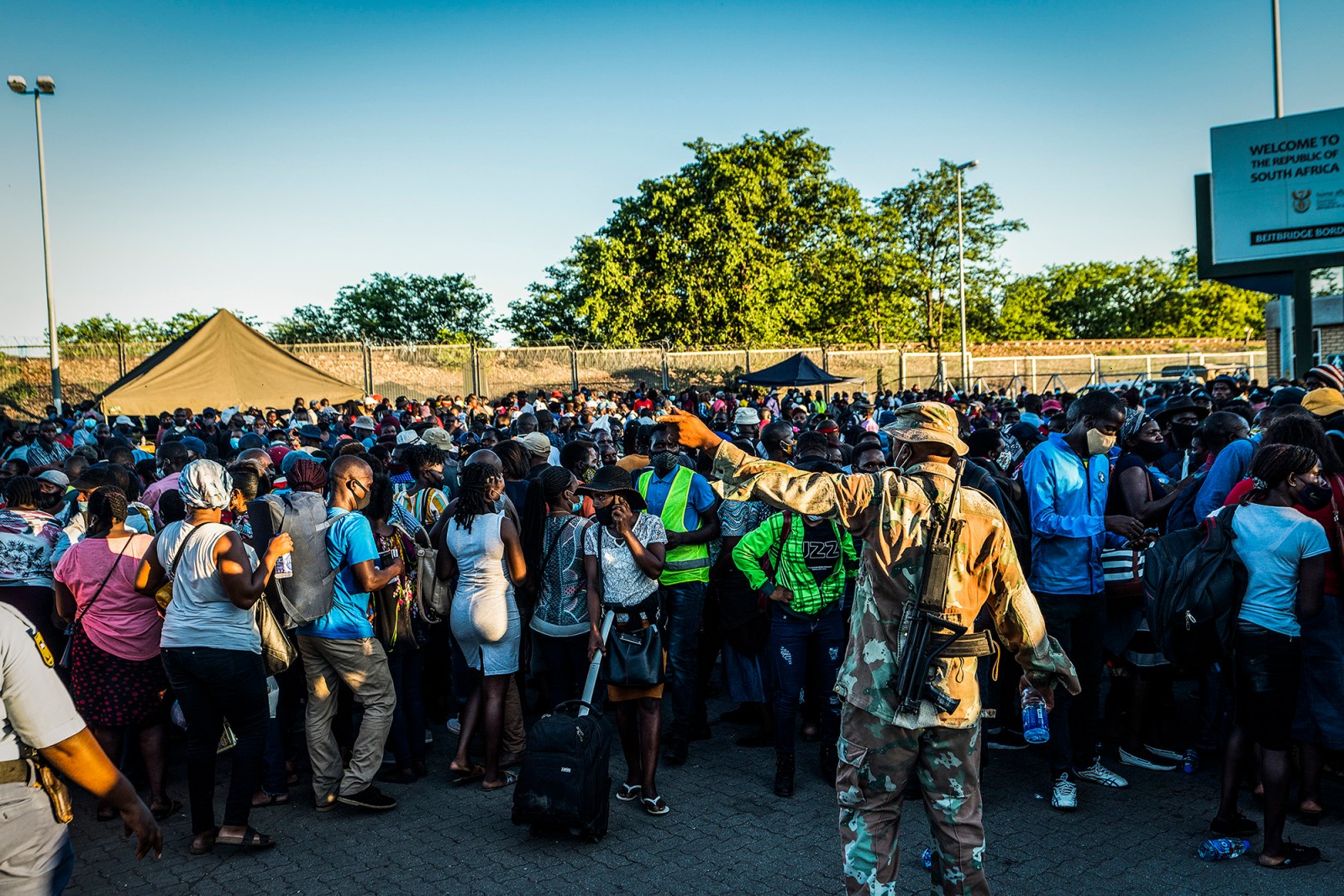 A soldier maintains order as hundreds of people gather at the gate of the Beitbridge border waiting to enter into South Africa following the announcement of the Zimbabwe lockdown. Photo / Shiraaz Mohamed.

The Beitbridge border was chaotic on Monday, 4 January, as hundreds of people tried to make their way into South Africa following an announcement that Zimbabwe would be placed back on to Level 4 lockdown for 30 days due to a surge in Covid-19 cases. The lockdown includes a 6pm to 6am curfew.

Zimbabweans hoping to escape the Level 4 lockdown announced by the government found themselves cheek by jowl with hundreds of their fellow citizens at the Beitbridge border into South Africa.

Some have been queuing since Sunday, 3 January, while the numbers kept swelling.

By Sunday, Zimbabwe had recorded over 14,000 cases of coronavirus infections and nearly 370 deaths. It was these numbers that prompted Zimbabwe’s acting president, Kembo Mohadi, to announce the lockdown, which sent people fleeing. President Emmerson Mnangagwa is on a month’s leave. Health and Child Care Minister Constantino Chiwenga was reportedly also concerned by the spike in cases due to the country’s severely under-resourced hospitals and clinics.

Motsoaledi said more than 500 undocumented Zimbabweans are arrested each day at the border for trying to enter SA illegally.

On Monday, fake Covid-19 certificates and border jumpers were some of the issues officials faced at the gate as they battled to contain the crowd. Officials from SA’s Department of Health reported 17 incidents of fake certificates on Saturday, 2 January, and an immigration official said most of the fake certificates had come from people travelling by bus.

Home Affairs spokesperson Siya Qoza said, “If you come into the country with fake documents you will immediately be deported. That is the decision that the minister [Motsoaledi[ took and it has been communicated to everyone. People who are here [at the border], who either have expired [Covid-19] tests or do not have any tests at all, will get assisted through on-site testing.”

South African officials prioritised health checks, which slowed the movement of people through port control. A facility was set up for those not in possession of a Covid test result where they could get tested before proceeding to passport control.

Concern was raised by officials after an elderly man who tested positive for Covid-19 breached several checkpoints and made his way to passport control. He was found in possession of a medical certificate declaring him positive and arrangements were made for him to be deported.

Three women sat in a police van after being caught illegally entering SA. Two of the women admitted to an immigration official that they had crossed the Limpopo River, while the third, who passed through port control, could not explain why her passport was not stamped.

On allegations of corruption at the border, director for port control, Stephen van Neel said, “Corruption will be found in all government departments, and ports of entry are no different. There are officials who are here not really to serve the government or the country, but to serve themselves. That is a reality. But I must say that in each of the departments we have strong anti-corruption units. Home Affairs has a department that deals with corruption. From time to time we bring in the Hawks to make sure operations are checked and that they are complying with what is required. This is one of the realities and some of the things we are trying to manage in the best possible way.”

A large group of border jumpers were seen under the bridge connecting South Africa to Zimbabwe. They were later arrested by soldiers and loaded onto a truck for deportation. A soldier who did not want to be named said they had arrested over 2,000 people in one evening. Earlier Motsoaledi said the SANDF would be deploying army helicopters and SAPS boats to help patrol the border.