A rocky year for almost every firm on the JSE, except the mining companies 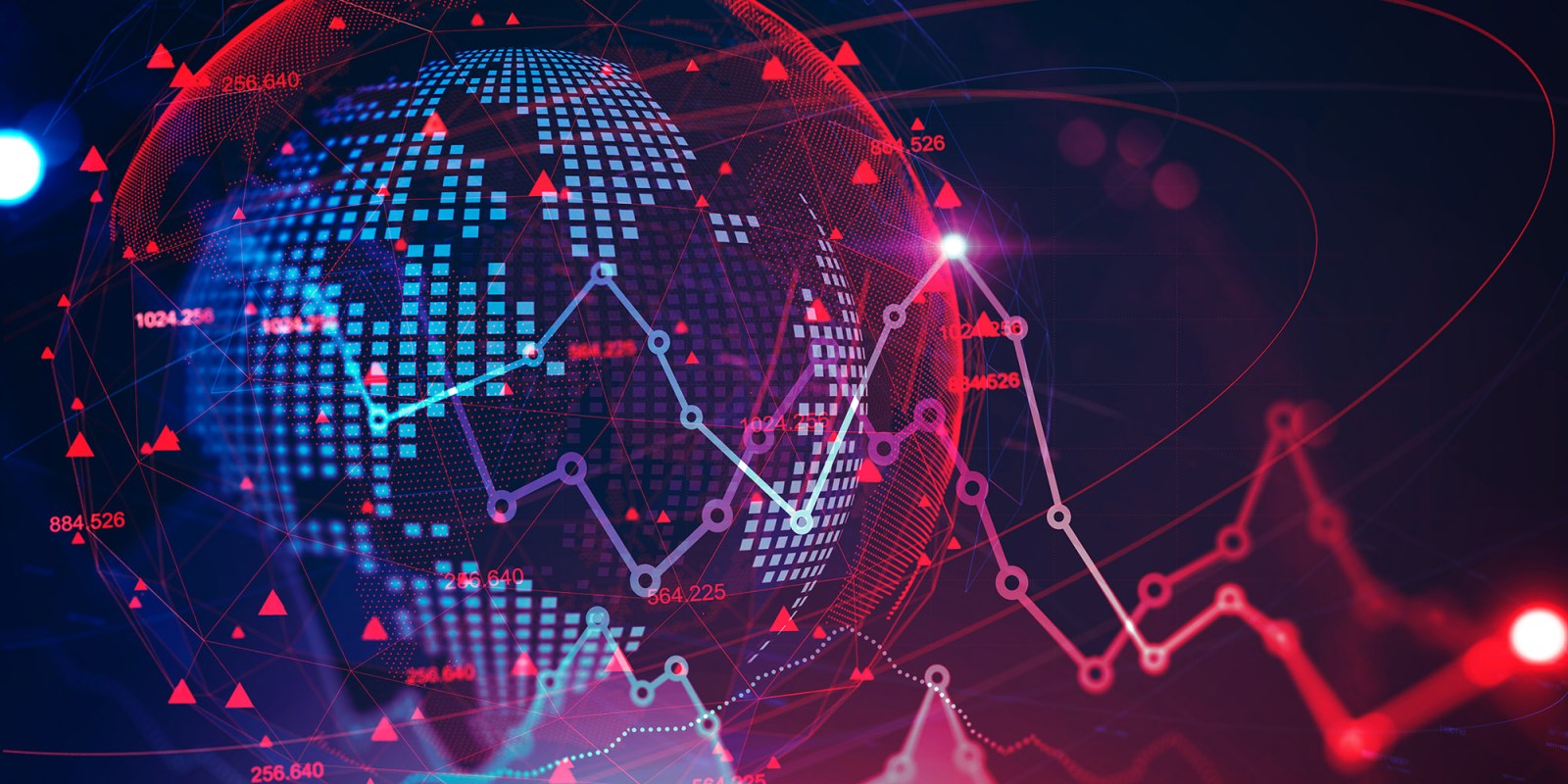 Widespread recognition is emerging of just what is at stake this year and how much economic ground we need to win back after the losses inflicted by the pandemic, says the writer. (Image: Adobe Stock)

Covid-19 took its toll on global economies and SA’s in particular – that much can be seen in the performance of SA’s blue-chip banking, retail and industrial stocks, which were hammered. Those that recover and thrive will be the companies with the strongest balance sheets and best management.

It is safe to say that the JSE had an interesting year in 2020. After crashing spectacularly in March, the stock exchange recovered its losses within weeks. Considering the devastation that Covid-19 wrought on the South African economy, the fact that the JSE ended the year up 0.63% from where it began in January 2020 is remarkable.

However, a closer look at the Top 100 stocks will show that while heavyweights like Naspers and Prosus did their bit to hold the bourse steady, gaining 31.8% and 52%, respectively, in the year, it was the resource stocks that saved the day.

Banks, which were expected to prop up the economy during and after the lockdown by providing extended terms and additional loans to individuals and businesses, fared badly over the year, with the Financial 15 falling 22.69% over the 12 months. Among the bigger losers was Nedbank, down 39.6%, and Standard Bank, down 24.5%, though it is worth noting that in the last six months these financial stocks have begun to climb back out of the doldrums.

Transaction Capital, which owns SA Taxi and 50% of used car platform WeBuyCars, was the exception to this rule, with its share appreciating by 18% in the year.

Out of the Top 100 stocks that most investors usually watch, just 38 shares showed positive growth, and of these 19 were mining shares.

Among the mining groups, DRDGOLD and Pan African Resources were the standout performers, with their share prices surging by 139% and 122%, respectively, although this growth has slowed in recent months. Kumba and Goldfields also grew strongly by 49.3% and 43.5%, respectively.

But as a class, it was the platinum group metals, or PGM stocks, that stood out in 2020, delivering returns that easily eclipsed those in most other sectors.

Support for this sector comes from increasingly stringent emission regulations in Europe and to an extent China, which is driving up the demand – and price – for palladium and rhodium. Platinum is gaining by virtue of the fact that work is being done to substitute palladium with platinum in autocatalysts.

PGM mining firms are also benefiting from the simple fact that their costs are largely rand based, while sales are dollar-based. They have been able to use these higher profits and cash generation to de-lever their balance sheets.

Retailers, on the other hand, are not so lucky and have had to fight for every rand of profit they have made over the last year. Some, like Shoprite, are defensive stocks and fared well despite the difficult conditions. In its results for the year to June 2020, Shoprite reported that its pattern of growing sales and taking market share had continued. The retailer reported that headline profits grew by almost 17%. Unlike almost every other Top 100 company, dividends were increased, by a hefty 20%. As a result, the share price jumped 22% in three days, reversing previous losses and ensuring the retailer ended the year up 11%.

Shoprite wasn’t alone, Italtile and Cashbuild benefited from the lockdown as people began small home improvement projects, and Richemont and its wealthy clients managed to survive and thrive, despite their travel itineraries being severely curtailed. Richemont ended the year up 18%.

However, whether this can be sustained remains to be seen. South Africa has entered 2021 in the grip of the second wave of Covid-19 infections and a subsequent set of lockdown restrictions. This will have far-reaching implications for economic recovery, making 2021 another interesting year for investors. 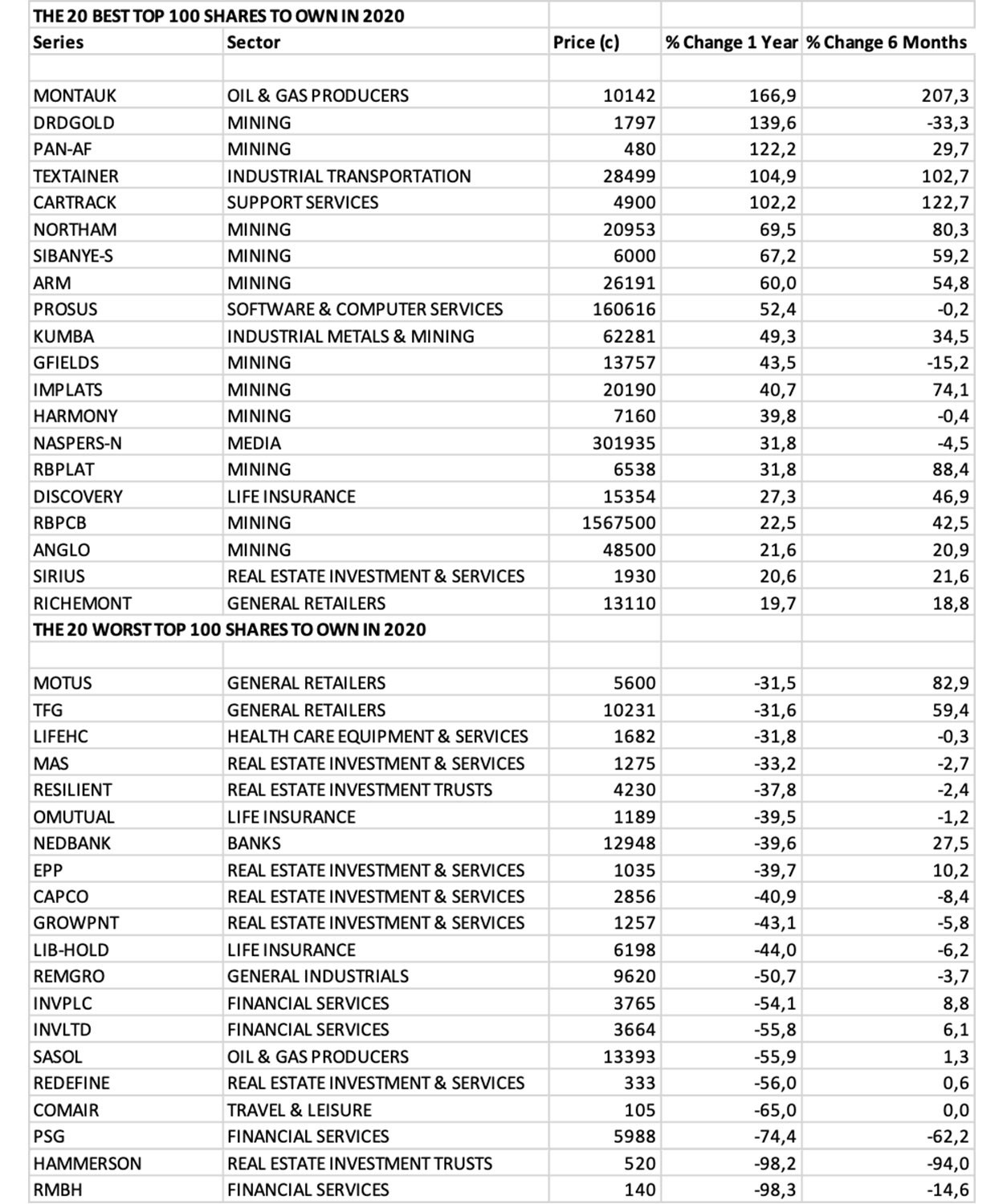