TRC hearings paved the way for the public right to truth about State Capture, argues HSF in ConCourt bid 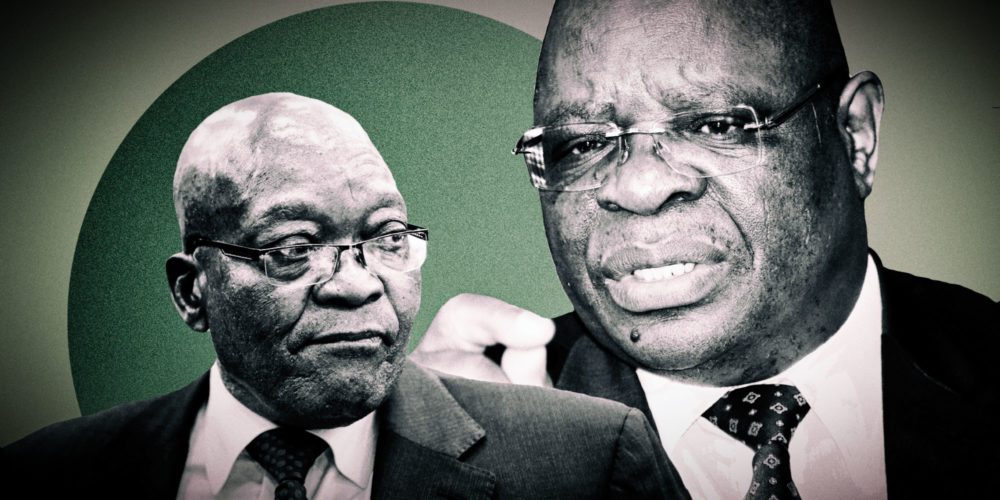 For South Africans, the similarities between the destructive leadership impulses of Donald Trump and Jacob Zuma are more than apparent.

Writing on 26 December on the meaning of Potus 45, Irish Times journalist Fintan O’Toole distilled the essence of Trump’s short-lived term and which quite comfortably can be applied to Jacob Zuma, who was twice trusted by South African voters.

Trump, adds O’Toole, “left important leadership positions in government departments unfilled on a permanent basis, or filled them with scandalously unqualified cronies. He appointed people to head agencies to which they had been publicly hostile.”

While Trump might at this point refuse to shift the oval office furniture in his head, Jacob Zuma is avoiding at all cost the Zondo Commission of Inquiry into State Capture to account for disastrous misgovernment on his watch that has been exposed by legions of witnesses for months on end.

O’Toole writes that Trump, like Zuma, has unfinished business.

“A republic he wants to destroy still stands. It is, for him, not goodbye but hasta la vista. Instead of waving him off, those who want to rebuild American democracy will have to put a stake through his heart.”

This week the Secretary of the State Capture Commission applied to the Constitutional Court to give a directive to compel Zuma to appear before the commission.

The Council for the Protection of the Constitution, Advocate Vuyani Ngalwana and the Helen Suzman Foundation (HSF) are the three amicus curiae in the matter.

In written submissions, SC Max du Plessis, Jabu Thobela-Mkhulisi and Catherine Kruyer, counsel for the HSF, not only set out why Jacob Zuma should be compelled to appear in the interests of truth, but also because the Truth And Reconciliation Commission paved the way for truth-telling in South Africa.

While they might one day be buried in a pile of paper in future the arguments present an exploded view of our recent past and loop in the fading legacy of the TRC.

No exception should be made for Zuma “particularly taking into account the purposes of the Commission and the allegations against Mr Zuma to which he must be made to answer.”

The submissions by the HSF were also being made to highlight Zuma’s legal duty to comply with the summonses and directives in terms of “constitutional and international law”.

Systemic and grand scale corruption undermined constitutional rights “in a serious manner” and in this context, argued the HSF,  “the public has a right to the truth concerning the state capture, corruption and fraud that have threatened our constitutional democracy”.

The Commission was an important mechanism for uncovering this truth and Zuma’s conduct, by subverting the coercive powers of the Commission and frustrating the truth-seeking purpose of the Commission, “undermines the public’s right to the truth regarding state capture and corruption.”

In the HSF’s submission, any reading of the Commissions Act which failed to give “best effect to the right to truth” would be unfortunate for two reasons.

The first is that South Africa “has been at the forefront of the developments concerning truth-seeking for years, and any retrogression in relation thereto, particularly in response to the need to understand the depth and scale of corruption that has blighted our development, would be at odds with our constitutional efforts to make a break with a past that obscured and distorted the truth.”

Secondly, the country’s transition from “its dark past under apartheid to a constitutional democracy founded on dignity, equality, and human rights and freedoms was facilitated by the uncovering of the truth concerning human rights abuses through the mechanism of a commission of inquiry…the Truth and Reconciliation Commission.”

In order to do this, the TRC had “coercive powers to compel the testimony of any person, without which its work would have been incomplete. South Africa was a proud trailblazer in this regard, as far as other truth commissions were concerned.”

It was imperative then, argued the HSF, that, “at this time when truth itself is under threat worldwide” that the “right to truth under our Constitution and internationally – be given full respect.”

“In our own backyard, there can be few projects less worthy of the fullest respect for truth-telling than the Commission’s efforts in searching for the answers and solutions to state capture that has blighted our past and imperilled our future,” argued the HSF.

Zuma, as the former president of the Republic of South Africa, is at the very epicentre of the charges of State Capture.

His refusal to attend and his walkout, “has seriously impeded the functioning of the Commission and threatens to undermine its ability to fulfil its crucial truth-seeking and recommendation-making mandate.”

No exception should be made for Zuma “particularly taking into account the purposes of the Commission and the allegations against Mr Zuma to which he must be made to answer.”

It was now “trite” that through the judgements of the ConCourt itself, that “corruption has a pervasive and destructive effect on the ability of the State to fulfil, and of individuals to realise, a number of fundamental rights contained in the Bill of Rights.”

The right to food, shelter, health, education, sanitation, privacy and dignity were all eroded by corruption.

The very foundations of our democracy were at risk from Zuma’s failure to respect the law, said the HSF.

About Trump, O’Toole writes that “democracy is not just about voting – it is a system for the rational articulation of ideas about the public good.”

Trump, he writes, “set out to lay waste to that whole system, from the bottom up, poisoning the groundwaters of respect for evidence, argument and rationality that keeps it alive.”

While Trump’s end, notes O’Toole, is his “new beginning” he will soon come to face, like Zuma, “enormous legal and financial jeopardy. He will have every reason to keep drawing on his greatest asset: his ability to unleash the demons that have always haunted the American experiment – racism, nativism, fear of ‘the government’.”

The legions who benefitted from Jacob Zuma’s profligate misgovernment, like the former President himself, will push back with every dirty dollar they have left.

The Constitutional Court’s granting of an order, said the HSF, would “vindicate the public’s collective right to the truth”.

Meanwhile, judgment in the matter has been reserved. DM