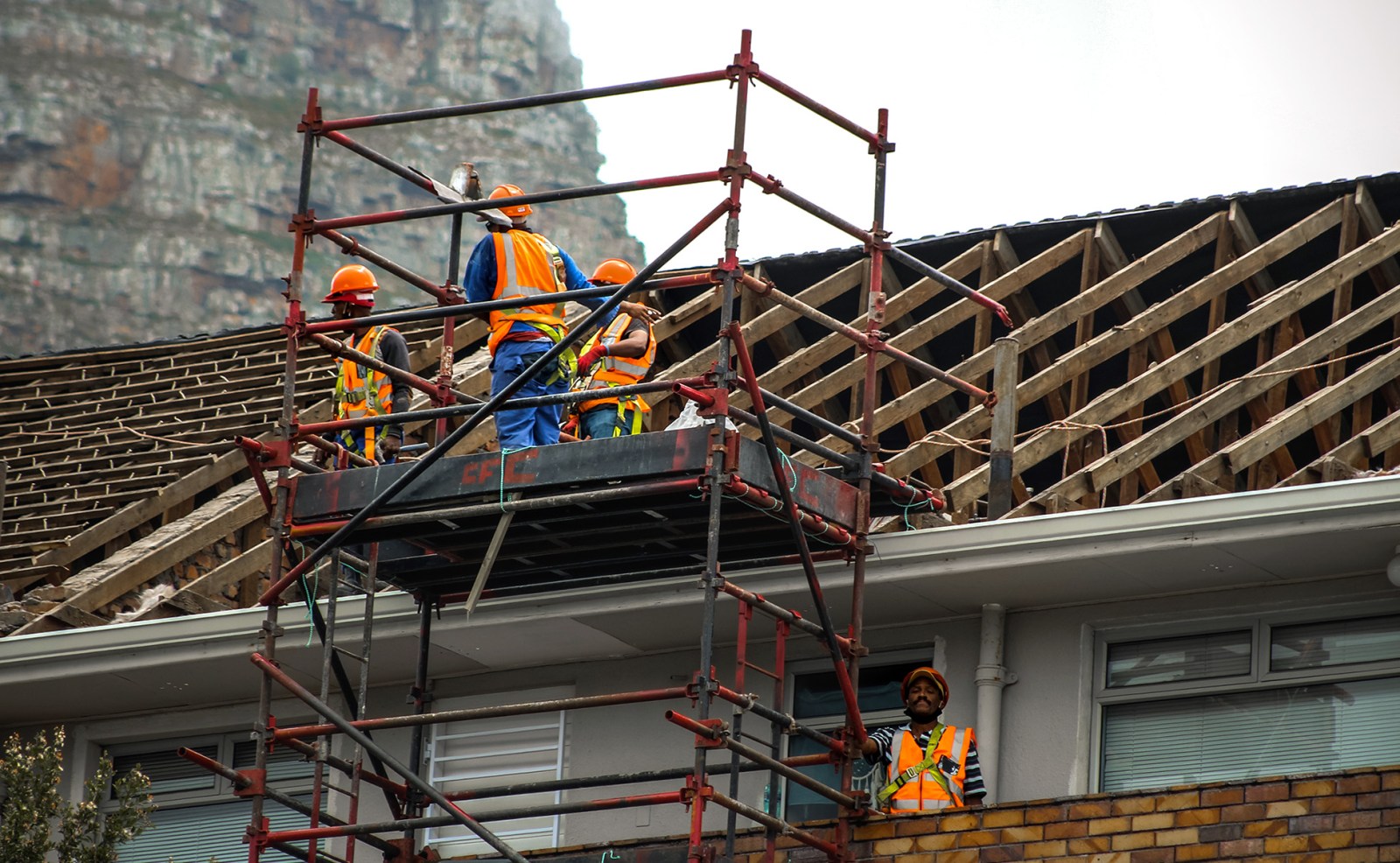 Construction by Levenbach Building & Roofing has resumed at Da Gama Court, Cape Town, after construction on the roof of the apartment complex was halted last week by the Department of Employment and Labour due to insufficient medical records for the workers, as well as noncompliance of Construction Regulation 2014. (Photo: Victoria O’Regan)

Construction work at Da Gama Court in Gardens, Cape Town, which was shut down by the Department of Labour on 9 December after Daily Maverick queried the safety of workers, has resumed with workers back on site, now wearing PPE and with all medical documents updated.

The construction work on the roof of Da Gama Court, an apartment complex on De Lorentz Street in Cape Town, recommenced on Monday morning after the Department of Employment and Labour approved working conditions on the construction site. The site had previously been closed down after the contractors, Levenbach Building & Roofing Contractors, were issued a prohibition notice on 9 December because of non-compliance with construction regulations.

On Monday, workers at the site were wearing helmets, harnesses attached to a safety line, and high-visibility reflective vests. Last week, the workers had been throwing roof tiles to each other while standing on the roof as they dismantled it, according to Daily Maverick’s report.

Now, the workers are passing the roof tiles to one another on the staircase of the apartment complex. According to Yule Stoffels, the supervisor of the construction, who was on site on Monday, the tiles are now being thrown into a truck parked a “safe” distance of 2m from the staircase.

The department has approved all medical documents, which were initially not in place or approved by the department, said Donald MacAlister, operations manager of Levenbach.

The roof construction had been halted after Daily Maverick queried the safety of workers wearing no protective gear as they worked on the roof. An inspection by the department a day later found that Levenbach had not complied with the Construction Regulations of 2014. The contractors were issued a prohibition notice allowing the construction to resume only once the department had approved new working conditions on the site.

“This is definitely an upstate, I would say, of about 80%,” said Stoffels. He added that everything on the construction site was now in place, from medical documents to the wearing of the requisite PPE gear while working. The site was closed for three days while the contractors sorted out the medical documents, he said, adding that the construction workers were still paid during those three days.

“It wasn’t like the guys took the fault,” he said. “We accept responsibility for negligence from our side … and now the correct measures are in place.”

Stoffels said the contractors had given the construction workers PPE to wear while working on the roof construction, which began on 1 December. “It is a difficult time to trade. We are heading into Christmas, and we are trying to wrap up a job, so we overlooked certain measures.”

“At the end of the year nothing is perfect. It is crunch time for every contractor,” he said. “But the measures are now put in place, and we are bringing closure to the community and still satisfying our client.”

“Can you imagine how difficult it would be to get the approval of medicals for [the 20 construction] workers?” The workers still need to put food on the table, said Stoffels.

The department of Labour confirmed to Daily Maverick that work had resumed.  An inspector met with Levenbach employers on 11 December and lifted the prohibition notice that was issued to the company, according to Candice van Reenen, an assistant director of communications at the Department of Employment and Labour. “The employer provided all the medicals for the employees to work on heights and an updated Safety File was presented, which included the relevant appointments,” Van Reenen said.

This article was updated on 15 December, 2020, to include a response from the Department of Labour, as requested by Daily Maverick.