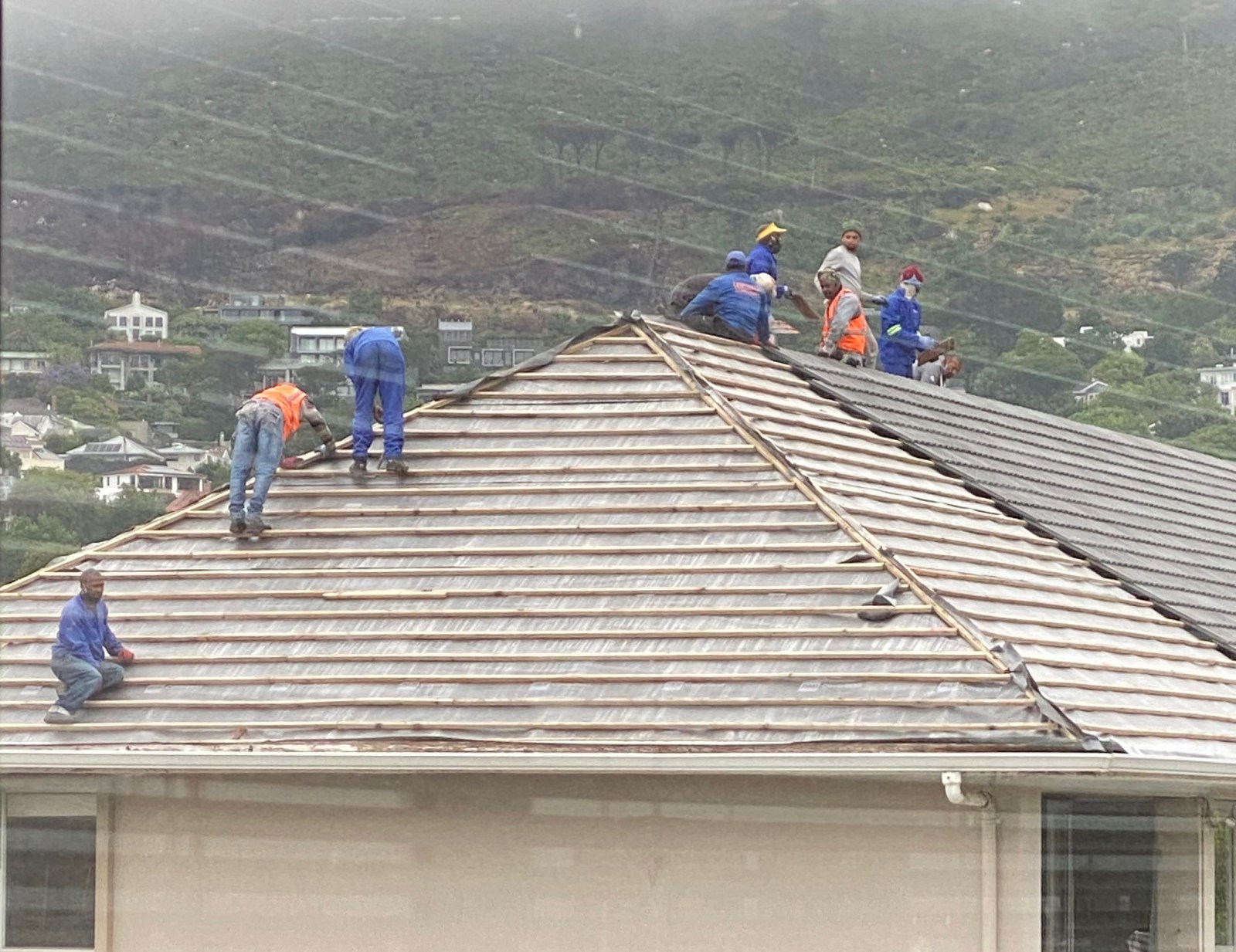 Construction workers, employed by Levenbach Building and Roofing Specialists, seen working on the roof of Da Gama Court complex in Cape Town, on the morning of 8 December 2020. The workers were seen wearing no helmets, harnesses or protective gear as they dismantled the roof. (Photo: Victoria O’Regan)

A building construction project in the Cape Town City Bowl was halted by the Department of Labour a day after Daily Maverick had submitted photos and queries about the precarious working conditions of more than 10 workers on top of the roof of a residential apartment complex.

On Wednesday morning, an Occupational Health and Safety (OHS) inspector from the Department of Employment and Labour visited a construction site at Da Gama Court, an apartment complex on De Lorentz Street in Cape Town, and issued the contractor – Levenbach Building & Roofing – with a “prohibition notice” that work may not continue until working conditions had been resolved.

The inspection took place a day after Daily Maverick sent the department queries about the precarious safety conditions of workers on the roof of the apartment complex. The OHS inspector found that Levenbach had not complied with the requirements of the Construction Regulations of 2014, and the 75-year-old company was served with a prohibition notice.

On Tuesday, 11 workers were seen by Daily Maverick on the roof of a *four-storey complex. They had no helmets, harnesses or protective gear as they dismantled the roof, throwing wooden trusses and clay roof tiles to one another and off the roof into a truck, two flights down.

Scaffolding was evident only on one side of the building, but there were no other structures to support the workers as they dismantled the building’s roof. This construction had been ongoing for a week, since 1 December, and Daily Maverick has video and photographic footage that was taken over various days, with concerns raised that if a worker took one wrong step, he could be seriously injured.

When asked for the supervisor on site on Tuesday, Daily Maverick was told that there was no supervisor present.

Daily Maverick queried the safety of the site with the Department of Labour and Levenbach on Tuesday afternoon. Photos of the working conditions were included in these queries. Daily Maverick questioned the safety on the grounds of the Construction Regulations of 2014 in terms of the Occupational Health and Safety Act, which states that where roof work is being performed a contractor needs to ensure that suitable and sufficient guardrails, barriers, platforms and toe-boards or other similar methods of protection – like sufficient scaffolding and the wearing of helmets or harnesses –  are used to prevent the fall of any person or equipment.

On Wednesday the prohibition notice was issued ordering Levenbach to “stop all activities pertaining to working at heights until such time that all workers on [the] above-mentioned site are in possession of a medical certificate of fitness for working at height”.

Daily Maverick has seen a copy of the notice. Neither the Department of Labour nor Levenbach addressed the photos concerning the safety of the workers on the site.

Donald MacAlister, operations manager of Levenbach, said the supervisor appointed to the site had other duties and was not on site at the time of Daily Maverick’s visit on Tuesday. Site supervisors must perform additional duties, such as the procurement of equipment, which means they are not available at all times on the construction site, according to MacAlister.

When asked about the insufficient scaffolding at the construction site, MacAlister replied that it was “impractical to place scaffolding under the roof (inside the building) to support the workers”, and that the standard would be the appropriate use of harnesses and anchor ropes. The use of harnesses and an anchor rope, which are stipulated in Levenbach’s fall protection plan, were “not adhered to and will be addressed”, said MacAlister.

A full safety file, containing Levenbach’s fall protection plan regarding safe operations on a roof, was located on the site and notification of commencement of the construction was forwarded to the Department of Employment and Labour, said MacAlister.

What the Department of Employment and Labour said

An OHS inspector from the Department of Employment and Labour inspected the construction site on Wednesday morning, and issued a Prohibition Notice, according to Candice van Reenen, the assistant director for communications for the Western Cape department.

Van Reenen said that the department had not issued the notice on the grounds of Daily Maverick’s queries. According to Van Reenen, the inspector found that Levenbach was non-compliant on the basis that the workers on the site were not cleared as medically fit to be working from a height, the employer had no fall protection plan in place, and that Levenbach had not notified the provincial director in writing at least seven days before the construction work was carried out, which is necessary if the intended work includes working at a height where there is a risk of falling. These regulations are stipulated in the Construction Regulations of 2014.

“For this particular employer, no medical records were found,” Van Reenen said. “According to the act, [Levenbach] needs to have a fall protection plan, which they did not implement. There were no medicals, which shows the employees medically fit at a height. This should have been included in the safety file, which is kept on site.”

Van Reenen also said that at the time of the department’s morning inspection, the workers were having a “toolbox talk”. The inspector did not observe the workers at a time where they were required to wear their harnesses or helmets, she said.

“Where there is a non-compliance pertaining to the OHS Act or any other regulation applicable to a construction site, an inspector will serve the enforcement notice(s) necessary for the non compliance observed at the time of the inspection,” she said.

There have been numerous safety incidents like these, said Narius Moloto, general secretary of the Building Construction and Allied Workers’ Union.

Flouting of safety regulations can put workers at serious risk of injury or death.

This year there were two onsite casualties of workers at a site in Umhlanga, KZN. There have been similar instances of the flouting of regulations in Gauteng in Krugersdorp, and in Pretoria.

“It is clear that when [the union] came to these sites, there was a total disregard for safety measures,” Moloto said.

“It is mostly subcontractors and contractors who are taking shortcuts and not following or working according to the specifications with regards to the safety measures.”

To report problematic construction work on sites please report it to the Department of Employment and Labour on 082 885 5187.
This article was updated  on Friday 11 December, 2020, to accurately reflect that the complex consists of a ground floor and two storeys from the front, but the ground is sloping so it is four on the side of the roof.