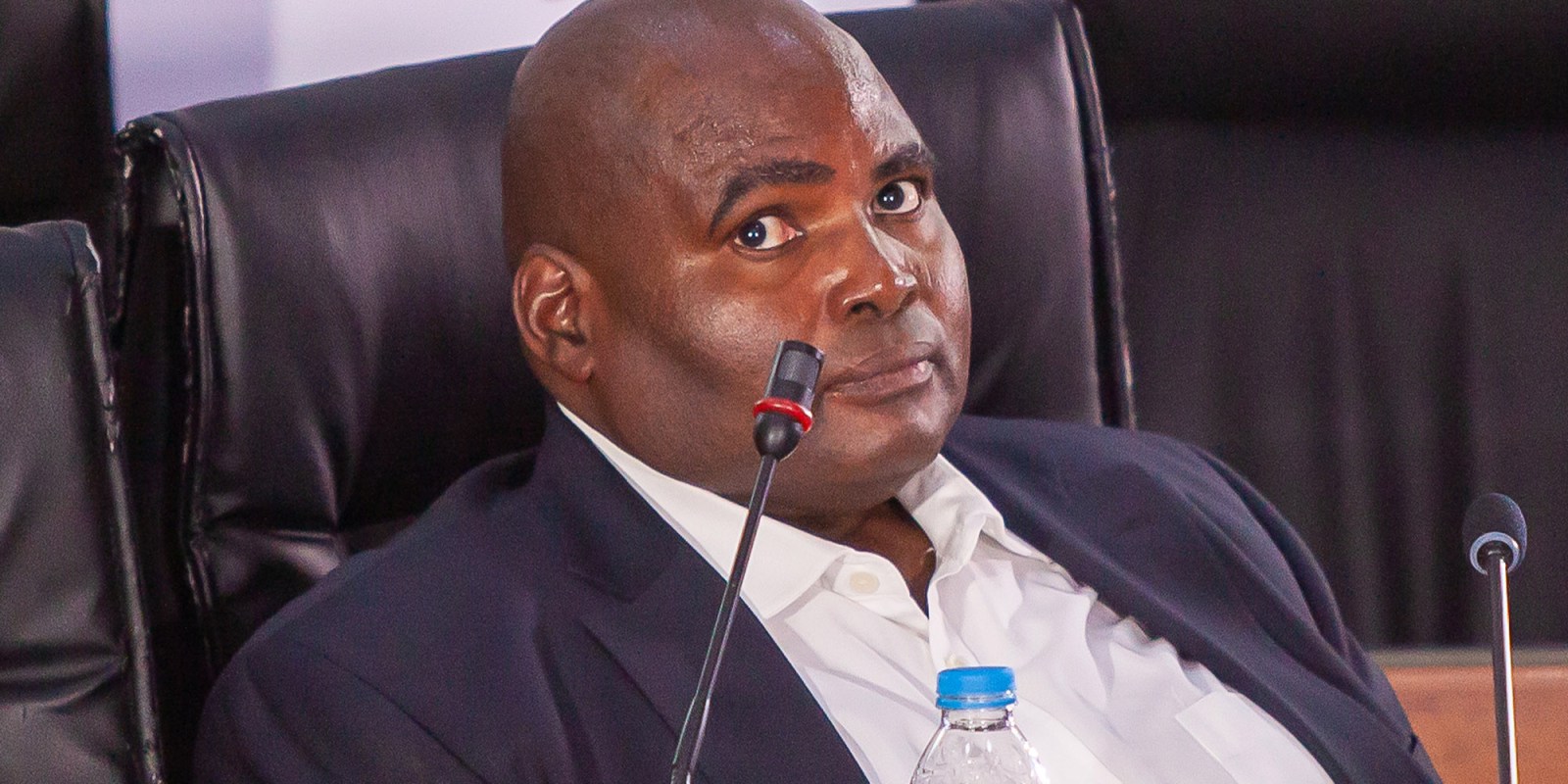 Phetolo Ramosebudi said he understood Regiments had a mandate from Acsa, which predated his appointment, to develop a funding plan for the company. (Photo: Gallo Images/Papi Morake)

Interest rate swapping on billion-rand loans, leaked tender documents, bank kickbacks and shell companies all come to light at the Zondo commission on Thursday, with Regiments Capital in a starring role.

There haven’t been as many “I ask not to answer the question in order not to incriminate myself” responses before the Zondo commission as were heard on Thursday 26 November since former SAA chairperson Dudu Myeni took the stand.

The requests by witness Phetolo Ramosebudi to withhold answers took effect as evidence leader Matthew Chaskalson presented damning emails pointing to Ramosebudi leaking internal tender information to the Gupta-tied company Regiments Capital while he was treasurer at SAA, and receiving millions from Regiments as it made money through interest rate swapping on billion-rand loans while he was treasurer at the Airports Company SA (Acsa).

Evidence was also presented suggesting collusion between Regiments and Nedbank at Acsa’s expense.

In contrast to his blanket requests to the commission chairperson, Deputy Chief Justice Raymond Zondo, to exercise his right to silence when it came to SAA or the payments he received from Regiments, Ramosebudi was comparatively forthcoming when it came to answering questions related to financing arrangements at Acsa, where he was treasurer from 2007 before moving to SAA at the end of 2011.

It is worth noting Ramosebudi worked in asset management at Nedcor Group prior to joining National Treasury in 1998, and worked for the Development Bank of Southern Africa (DBSA) from 1999 to 2002. Both Nedbank and DBSA appeared in Acsa-related evidence of interest rate swapping on a R1.5-billion loan.

The day began with Ramosebudi saying he understood Regiments had a mandate from Acsa, which predated his appointment, to develop a funding plan for the company.

Although he authorised payments to Regiments, and assisted in receiving fees from Nedbank and Standard Bank for the work it did on behalf of Acsa, he said he did not know whether proper procurement processes had been followed in Regiments’ appointment, nor whether Regiments had the mandate to execute the funding plan it was paid to develop, as Regiments was appointed before he joined the company.

Questioned whether Regiments received a fee from Acsa for providing advice to enter in the DBSA loan, Ramosebudi said: “I think so.”

Chaskalson then produced emails between Nedbank and Regiments discussing the fees they would earn from the interest rate swap, as well as invoices from Regiments to Nedbank, indicating they were taking money from both sides. Ramosebudi said he did not know about this.

I put it to you that you were at best gravely negligent in allowing these transactions to take place without checking they had authority.

However, Ramosebudi’s professed lack of knowledge was called into question by correspondence between Regiments and Standard Bank, in which Standard Bank requested proof of its fee agreement with Acsa, to which Wood responded that Ramosebudi had been informed of Regiments’ fee.

Under questioning, Ramosebudi said Wood was stating who he had informed of the fee, not who authorised it.

“I wouldn’t have known if he was authorised as I hadn’t seen the mandate,” he said, to which Chaskalson said Wood was citing Ramosebudi as the authority confirming Regiments could take a fee of more than R10-million. He noted this would ultimately be paid by Acsa as part of the interest rate swapping fee to Standard Bank, yet Ramosebudi never checked to see if Regiments was allowed to take this fee.

However, Ramosebudi said he confirmed to Standard Bank that Regiments was undertaking the transaction on behalf of Acsa, which caused Zondo to raise the question as to why Regiments would even have to have a conversation about the fee if it fell within their existing agreement. Ramosebudi conceded the fee may have fallen outside the terms of their agreement.

“I put it to you,” said Chaskalson, “that you were at best gravely negligent in allowing these transactions to take place without checking they had authority.”

Ramosebudi argued he believed there was value in the work Regiments did, to which Chaskalson responded that even if that were the case, that was not how the procurement process worked; to have one individual deciding whether there was value in a transaction or not.

Ramosebudi deflected the responsibility upwards, to the financial director and Acsa board, but then said he could not recall if he had told anyone about the interest swap fees being taken by Regiments.

What was particular about the money Regiments earned from the interest swaps, is that the swaps did not appear in Acsa’s books, so if Ramosebudi did not tell anyone, they would not be picked up. The money was paid to Regiments by the banks, while on Acsa’s side it was only reflected as payments to the bank.

Looking at Acsa’s books, it was not possible to see that Nedbank had paid R24-million to Regiments from fees charged to Acsa, or that Regiments had claimed R22-million on a R1.7-billion loan from Standard Bank, noted Chaskalson.

He then produced a series of emails from Ramosebudi to Regiments’ Wood from December 2009 to April 2011. These contained invoices to Regiments in the name of various companies owned by Ramosebudi, or in one or two cases his brother Psychology Ramosebudi. These totalled R9.1-million.

Corresponding bank statements showed that between June 2010 and October 2013, more than R5-million was paid by Regiments to Ramosebudi for various services billed, including the provision of liquor and catering from his company trading as Venus Liquor, actuarial services to Ramosebudi’s company Riskmaths Consulting, and to his company Rams Capital.

It was during the presentation of this evidence that Ramosebudi invoked his right not to incriminate himself.

Chaskalson then presented an email trail from Nedbank, in which Ramosebudi was carbon copied, indicating that on 19 July 2011, Acsa would have had to pay R292.5-million if it wanted to extricate itself from the interest rate swaps. Ramosebudi said he couldn’t recall this.

His request to invoke his right not to incriminate himself continued throughout the afternoon as Chaskalson honed in on Ramosebudi’s tenure as treasurer at SAA from December 2011 to 2015.

Here, Chaskalson produced email thread after email thread pointing to Ramosebudi providing Wood with information on a tender to assist the SAA group with the unlocking of capital.

Chaskalson then produced a spreadsheet he said was an internal Regiments document reflecting the revenue generated by McKinsey’s advisory unit and the payments it had to make to business development companies, “usually shell companies set up by Salim Essa”.

The evidence presented started with an email from Ramosebudi to Wood on 14 October 2013 containing a draft of the request for proposals relating to the tender, which was very similar to the final request for proposal sent out to bidders on 19 November, just over a month later.

Then, according to Chaskalson, using a methodology in which Ramosebudi would first forward the email from his SAA email account to his Rams Capital email account before forwarding it on to Wood and others at Regiments, he sent the tender evaluation criteria to Regiments on 28 October 2013.

The following day, he sent an invoice from his company Rams Capital to Regiments for R375,606, which, according to bank statements, was paid in full on 11 November.

Chaskalson then produced emails showing how, using the same methodology of first forwarding what he received in his SAA email account to his personal Rams Capital email account, Ramosebudi kept Regiments and McKinsey (with whom Regiments formed a joint venture to bid for the tender) up to date with what rival bidders were submitting.

It appears Ramosebudi went so far as to use his leverage to alter the bid evaluation criteria to suit McKinsey/Regiments, and assisted in keeping their bid below R100-million so it would not have to go to the SAA board.

It would seem the McKinsey/Regiments joint venture charged between R70-million and R85-million to unlock R1.2-billion of funding for SAA, whereas a rival bidder, Boston Consulting Group, came in with two options; one at R14-million and one at just more than R10-million.

When it seemed the tender evaluation wasn’t leaning toward McKinsey/Regiments, Ramosebudi intervened, voicing he was “seriously unhappy with the way the tender was being run” in an email to his colleagues.

An email from McKinsey to SAA on 26 February 2014, expresses the company’s gratitude for receiving the work.

Chaskalson then produced a spreadsheet he said was an internal Regiments document reflecting the revenue generated by McKinsey’s advisory unit and the payments it had to make to business development companies, “usually shell companies set up by Salim Essa”.

These shell companies, said Chaskalson, were used to channel up to 50% of revenue received from state-owned entities.

Asked whether he was aware SAA money was funnelled into shell companies, Ramosebudi invoked his right not to incriminate himself.

The Commission of Inquiry into State Capture will hear Transnet related evidence from Ramosebudi at 2pm on Friday, with former treasurer of the Greater Johannesburg Region of the ANC, Moloantoa Makhubo, giving testimony in the morning from 10am. DM