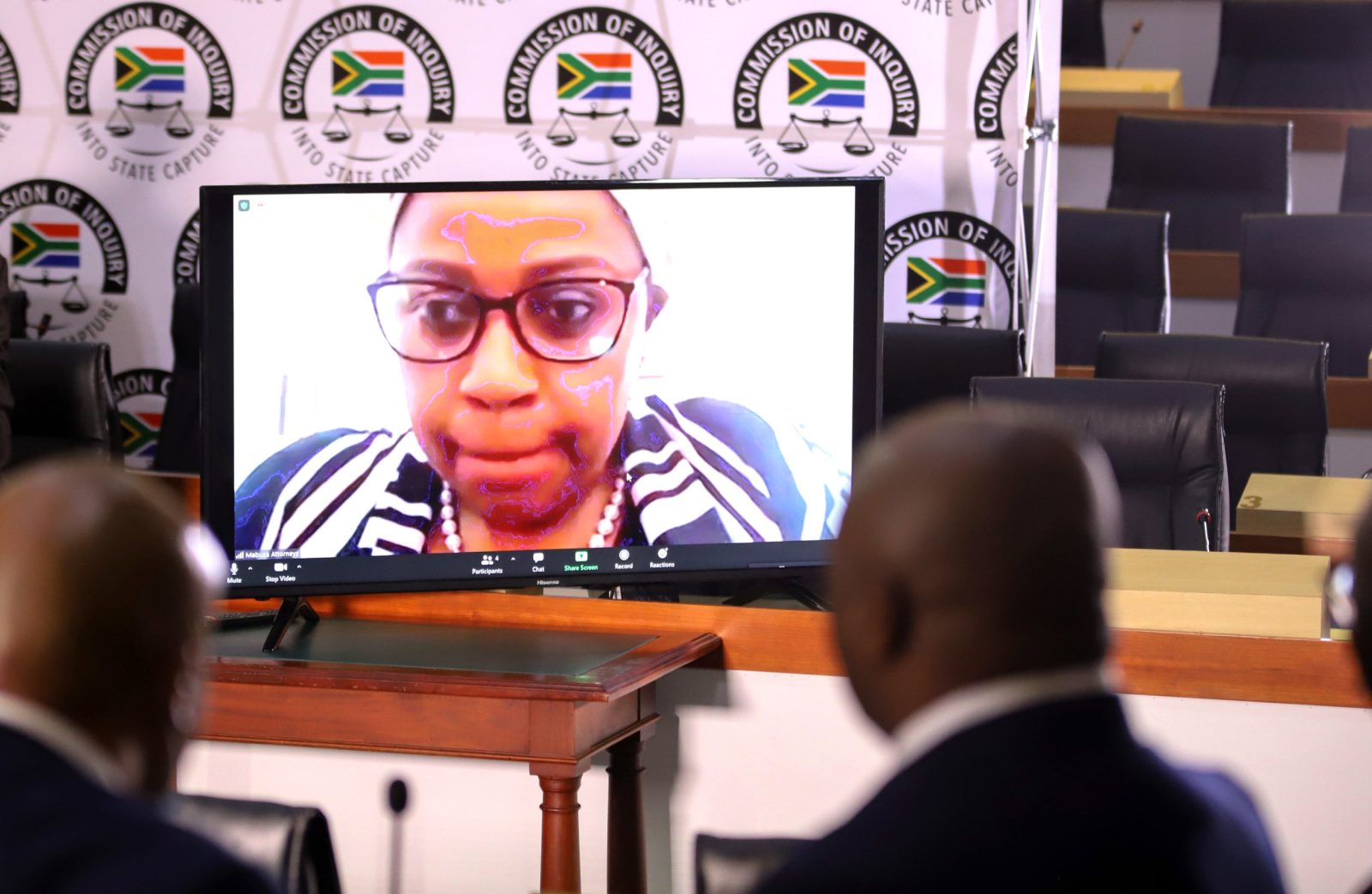 Former SAA chairperson Dudu Myeni testified at the State Capture Commission over Zoom on 4 November 2020 while she was in self-isolation after being exposed to Covid-19. (Photo: Greg Nicolson)

Former SAA chairperson Dudu Myeni has a history of trying to dodge legal proceedings and refused to answer questions at the State Capture Commission on Wednesday, claiming she might incriminate herself.

Dudu Myeni delayed appearing at the North Gauteng High Court when the Organisation Undoing Tax Abuse and SAA Pilots Association successfully applied for her to be declared a delinquent director. The former SAA board chairperson claimed she couldn’t afford the fuel to travel from KwaZulu-Natal.

Myeni testified at the State Capture Commission of Inquiry via video link on Wednesday. She said she was in self-isolation after having been exposed to Covid-19.

After Myeni’s connectivity issues were finally resolved, she said she respected the commission’s work, but invoked her right to silence to avoid incriminating herself.

“May I not answer, chairperson, in case I incriminate myself,” Myeni repeatedly told inquiry chair Deputy Chief Justice Raymond Zondo.

Myeni has been accused of blocking a crucial SAA leasing deal with Airbus in 2015 and trying to introduce a local company as a middleman. Then finance minister Nhlanhla Nene had said it would be disastrous for the country’s finances if the Airbus deal failed.

She’s accused of pushing SAA officials to sign irregular black-empowerment deals with Swissport SA and Engen, and hounding those who questioned her directives out of the organisation.

SAA’s finances floundered under her leadership and the SOE is now in business rescue, looking to relaunch after yet another recent government bailout.

She’s accused of orchestrating the suspension of Eskom officials, paving the way for further dodgy deals at the energy parastatal.

Myeni is also alleged to have laundered bribes while she sat on the Mhlathuze Water Board and ordered funds from a state housing contract, earned by her son’s company, to be paid to Zuma’s foundation.

The commission has heard accusations that she unlawfully received protection from the State Security Agency because she was seen to be Zuma’s ally.

In May, the North Gauteng High Court’s Judge Ronel Tolmay declared Myeni a delinquent director for life. Judge Tolmay recommended the NPA investigate the allegations against the former SAA chair, who led the airline between 2012 and 2017.

He said Myeni was likely to face criminal charges following Tolmay’s judgment and should be allowed to avoid incriminating herself.

“There probably are Hawks waiting outside to arrest her; that’s what we heard this morning,” said Masuku.

“We understand there is a real hammer over her head and which hammer is that judgment of Tolmay and real reports about real police officers looking for her to be arrested,” he continued.

Myeni also cast doubt on the commission’s credibility. She said Outa submitted documents to the North Gauteng High Court that came from the State Capture Commission and included its watermark.

She and her lawyers suggested those documents might have been leaked or used unlawfully.

Evidence leader advocate Kate Hofmeyr said submissions to the commission become public record once witnesses appear in front of Justice Zondo and the commission has heard evidence about SAA before Outa’s case.

Hofmeyr said the inquiry’s watermark was added to documents when they’re uploaded on the commission’s website, then considered public.

While that suggested the documents Outa submitted to the North Gauteng High Court were already considered public record, Hofmeyr said evidence leaders had asked Myeni’s lawyers to cite particular documents so they could verify whether they were publicly available. Myeni’s lawyers failed to list the documents.

Justice Zondo allowed Myeni to refuse to answer even the most basic questions. He said he would consider them and look at whether Myeni’s refusals are justified on the basis that she could incriminate herself. He could then come back and might instruct her to answer.

Hofmeyr began questioning Myeni, who committed to hearing the questions and answering where she felt comfortable, by asking her about whether she understood her fiduciary duties when she was appointed acting SAA chair in late 2012. Myeni refused to answer.

Myeni served on the board of Mangaung electricity provider Centlec. Hofmeyr asked about her remuneration on the board and whether she received R35,000 for her work on the board in September 2019.

“Chairperson, I’d like to ask if I am trial or not,” responded Myeni.

Hofmeyr asked about Myeni’s CV, which the Department of Public Enterprises published when she was appointed acting SAA chair. Myeni’s CV claimed she had a degree in business administration, but she never finished her studies.

Myeni defended including her partial studies at the University of Zululand on her CV, claiming she didn’t have a general understanding of how other people compile their resumes and was being held to a “western standard”.

“I request that I don’t answer this question before it becomes something that will put me in bad light, that I should have followed some western standards to write a CV.”

Myeni is scheduled to continue testifying at the commission until Friday. DM