Bagels, road trips and love after being apart 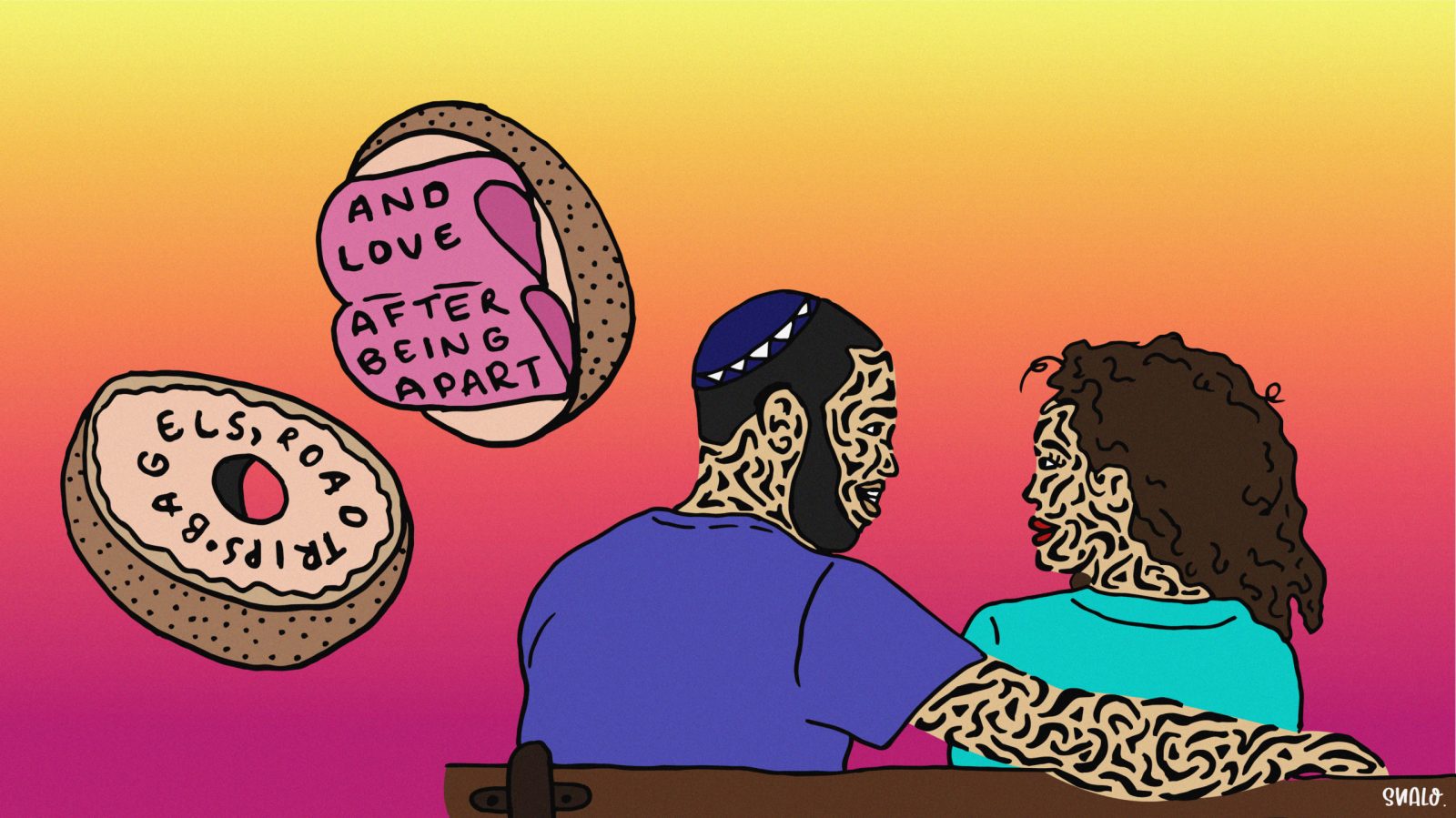 As the country slowly reopened for travel between provinces, she took a trip to see her boyfriend again. What awaited her was love wrapped in kneidels and horseradish.

I never take much food on road trips. Usually I buy a coffee as I get going and then stop along the way and eat junk, like slap chips, Lunch Bars and wine gums.

The road trip I did that day, taking a chance and heading to my boyfriend in a pandemic, was no different. I picked up a double flat white with a chocolate muffin and was good to go.

For two days I ate badly; greasy burgers from the Wimpy at Shell Ultra Cities, with extra squirts of bright yellow mustard and fake red ketchup. It was delicious.

Instead, I got a bagel, an enormous mound of chopped liver, pickled cucumbers, chicken soup and kneidlach. Did I mention I have a Jewish boyfriend?

I enjoy this kind of food. It reminds me of my youth and my family. How thirty years ago my dad would sit at the head of the cedar table and say the blessings. He always pulled the same stunt – getting his toolbox and pretending to drill into a kneidel. A kneidel is a soup dumpling made from matzo meal and is meant to be light and fluffy.

Jewish food is not exactly romantic food. It’s comfort food, much of it originating from the shtetls of Eastern Europe. I felt a bit sad thinking how I had broken away from tradition, and how I don’t have the best relationship with food, having sated one too many urges with it.

“Have another bagel,” he says.

“Just a little liver,” he insists.

“Fine”, I reply, doing my best to swallow.

Food, prepared with love, is intimate. From the local kosher Spar in Sea Point, not so much.

“Have you ever seen a kneidel so big?” he asks.

“I haven’t,” I reply, thinking I never want to see one again.

I can feel his eyes on me as I chew. I notice that his breathing has quickened and he looks flushed. He seems oddly aroused.

I think it goes back to my parents, he explains. Food was the way they expressed their love. “It took me years to realise why I had so many friends”, he says.

After dinner, we catch up in the kitchen. This is where I keep the salmon he tells me; the cheese is here; olives in this jar. And there’s excellent salami, he adds, which makes me smile as he decided he would turn to a plant-based diet during lockdown, if only for three days.

I eventually slam the fridge door with a bang. The perfect night we’d dreamed about did not quite go according to plan: our stomachs are huge, I smell of chopped liver and he tastes of salty kneidlach. Also, we are both a bit nervous.

Food was his intimacy.

It takes a bit of time but we relax. I eventually had to slam the kitchen door and seduce him, not on the kitchen counter because there was liver smashed everywhere but in the fridge because I couldn’t get us out of it.

We had a few glorious days. He makes eggs and pancakes for breakfast and gives me second helpings even when I am bursting, feeds me berries, pops dates into my mouth and then we plan our own little road trip.

I would’ve picked up a coffee and done the usual, but he has other ideas. He buys a giant cooler box from Takealot, and now, he is extremely focused on filling it. To my surprise, I find myself adding a little produce.

“Are we sure we have enough?” one of us ponders.

He packs the car, including two deck chairs and an umbrella which is kind of sweet because he hates the beach, and on the way out, he stops at Giovanni’s, another of Cape Town’s iconic caterers.

And then we hit the road. I settle into the passenger seat and switch on the music. About 10 minutes into the trip, with David Bowie singing in the background, he suggests we taste the bagels with rare roast beef and horseradish.

On the road, there are fields of yellow – canola, many flowers, it is the season – and beautiful light, even a rainbow. I can’t help sighing. And feeling sexy – but every time I put my hand on his leg, he asks me to pass the nuts.

As we approach Napier, with just half an hour to go, he turns white and quiet.

But our cooler box is still full. DM/ML