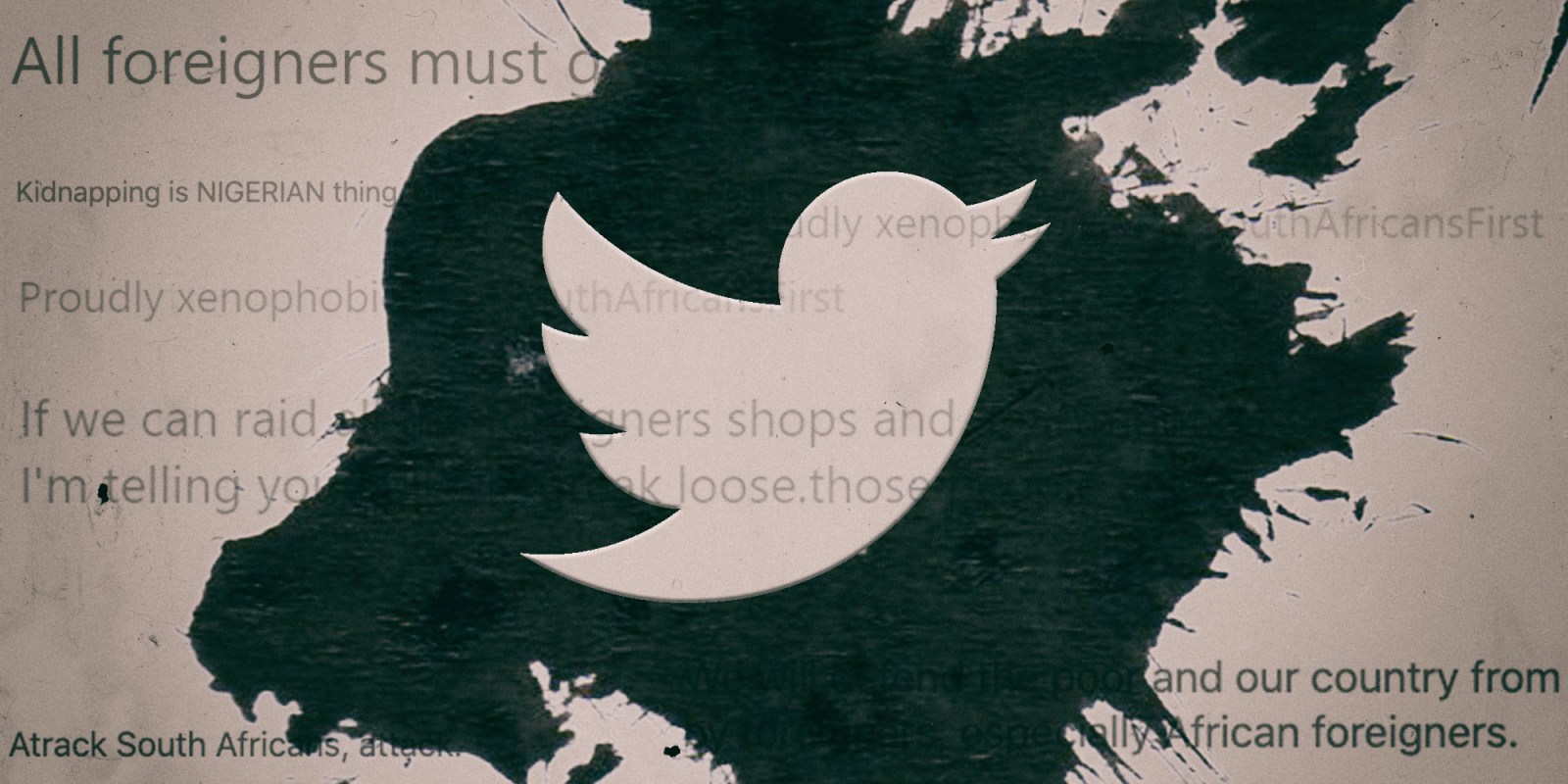 The Centre for Analytics and Behavioural Change, based at UCT, submitted a series of tweets which included #putsouthafricansfirst to Real411 for assessment. Real411 is affiliated to Media Monitoring Africa and enables the public to report disinformation, hate speech, incitement to violence and harassment of the media. The findings have thrown light on what constitutes hate speech and incitement to violence on social media – and shown that some accounts are breaking the law with impunity and sowing social discord in full view.

Some social media accounts associated with the #putsouthafricansfirst movement are using the hashtag to spread hate speech and incite violence.

The #putsouthafricansfirst hashtag was first used by politician Herman Mashaba’s Twitter account on 27 April this year. The post was accompanied by a video of various crimes allegedly committed by foreigners. No proof was provided to back the allegations.

On the same day, an account named @uLeratoPillay used the hashtag in six posts.

In this open letter to the media, the movement claimed it was patriotic, peaceful and non-violent. But some accounts central to the movement have bordered on encouraging hate and condoning violence towards foreigners. Nearly all prominent PSAF accounts are careful not to publish content that meets the legal definition of hate speech or incitement to violence.

But Real411’s Digital Complaints Committee, which adjudicates each complaint based on strict legal criteria, found clear evidence of hate speech in some of the movement’s tweets submitted by the Centre for Analytics and Behavioural Change (CABC) at the University of Cape Town.

The three posts classified as hate speech were all yellow.

All 10 accounts that authored these posts were connected to the PSAF movement.

Here is a brief description of each complaint and the account’s connection to PSAF. 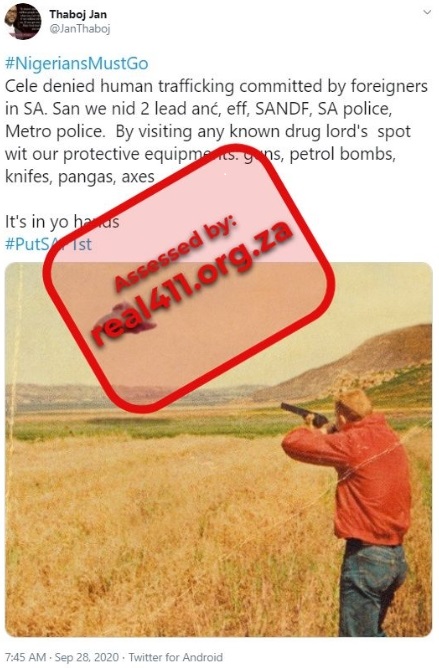 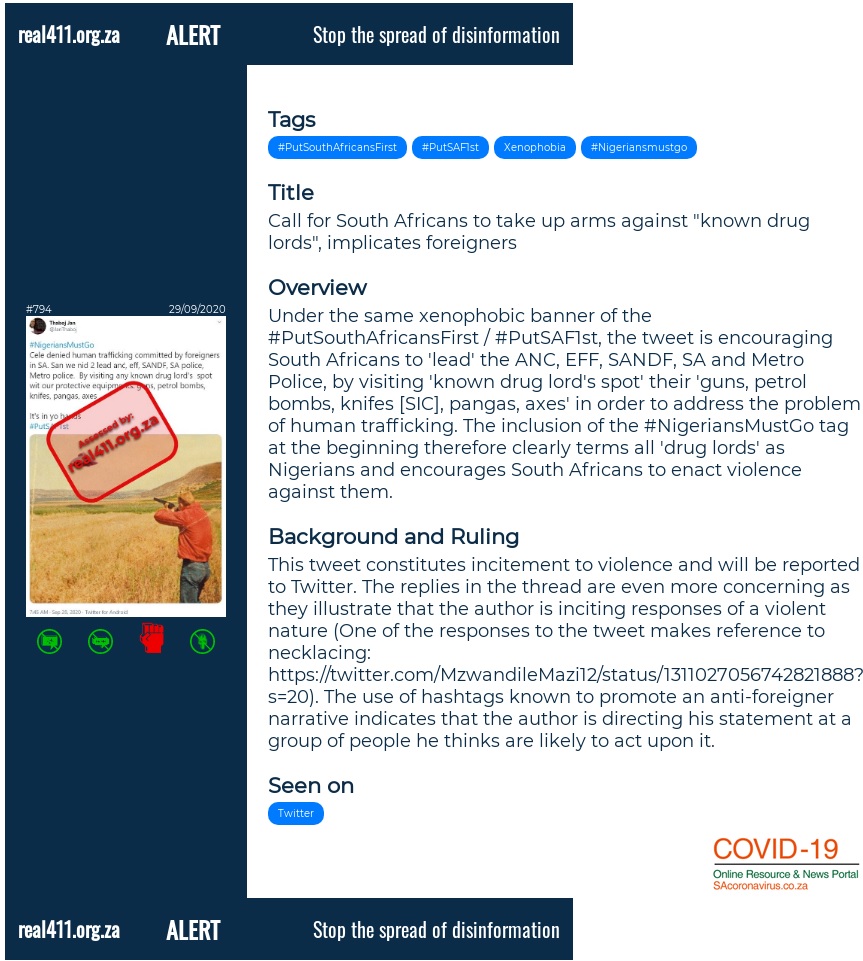 This post was a clear example of incitement to violence by an account that was actively involved with the PSAF movement. The account’s profile information includes only the #putsouthafricansfirst hashtag and has tweeted 942 posts using various PSAF hashtags. Nearly half of these were original posts such as the tweet pictured above. Real411 noted: “The replies in the thread were even more concerning as they illustrate that the author is inciting responses of a violent nature (One of the responses to the tweet makes reference to necklacing.)” 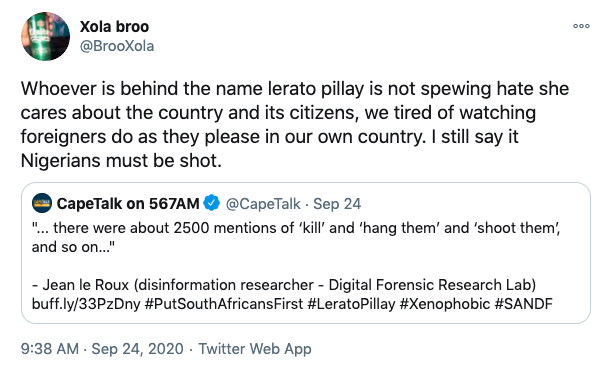 Real411 found that both these posts met all criteria for incitement to violence. Tweet 863 and “responses thereto call for an organised and funded assassination programme against Nigerians in South Africa”. The adjudicator calls the post “incredibly concerning, extremely alarming and deplorable”.

The @BrooXola account is not central to the PSAF movement but has shown its support for the movement. On 3 August 2020 it tweeted: “Change is needed in this country ASAP. #PutSouthAfricansFirst.” 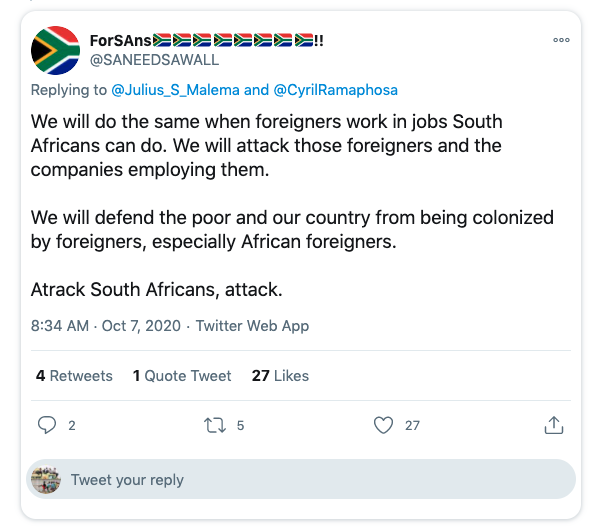 Real411 found that this post amounted to “a call to ‘attack’ foreigners who ‘work in jobs South Africans can do’ as well as ‘the companies employing them’”, and, “It might reasonably be expected that the natural and probable consequences of this publication would, under the circumstances, be the commission of public violence.”

@SANEEDSAWALL is a fairly prominent account in the PSAF movement and engages with xenophobic content on a regular basis. The account’s profile information features nationalist rhetoric and has posted 159 tweets with PSAF hashtags, 114 of which were original content. 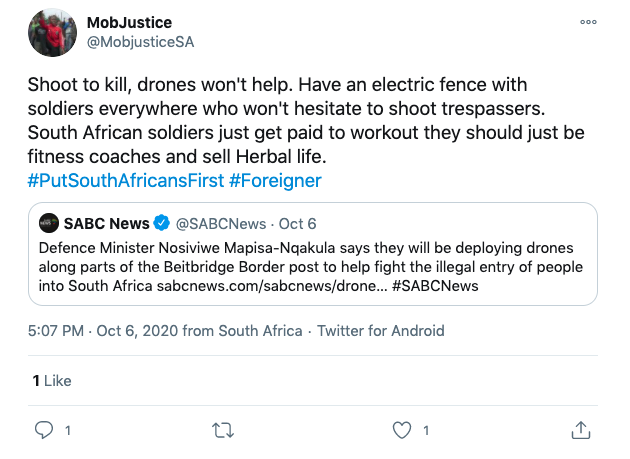 Real411 found that the author of this tweet made an “outright call to ‘shoot to kill’ that served as a strong and clear call to commit violence targeting foreign nationals. The submission was classified as yellow because “the call is not to the general public but an expression of a desire for ‘soldiers’ to do so”. 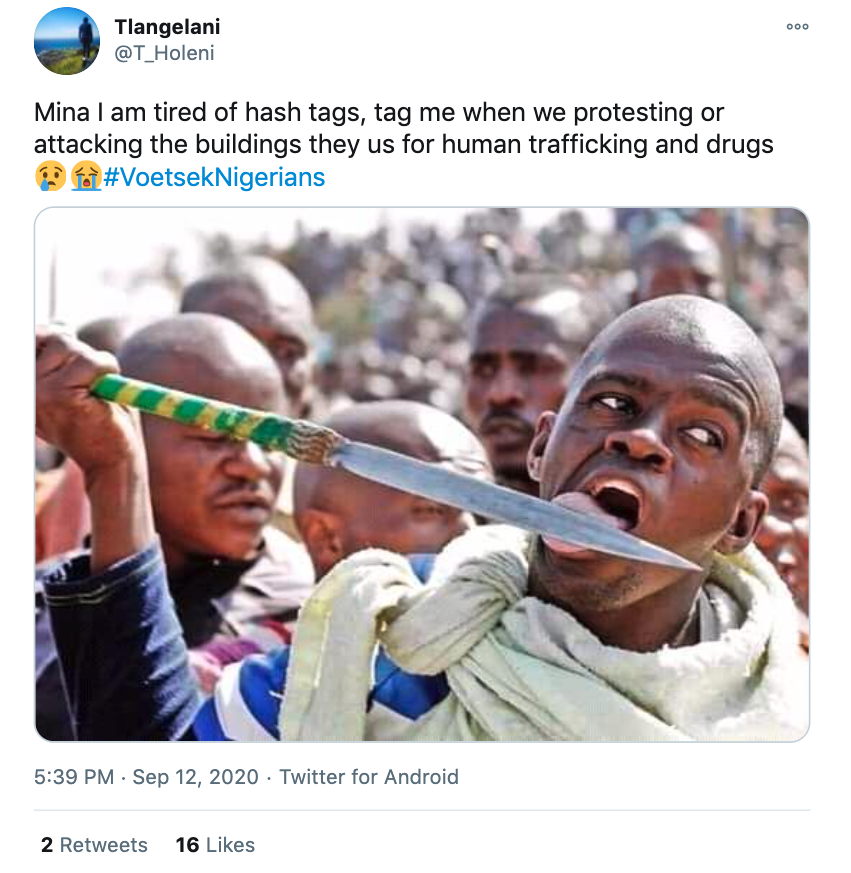 Real411 found that the statement made in the wording (“attacking” and the hashtag #VoetsekNigerians), and the image, could inspire violence towards foreign nationals. The submission was classified as yellow because the incitement to violence was implicit and the user called on people to attack buildings not people.

This tweet was an example of an implicit call to violence made by a central account in the PSAF network. Real411 found: “This tweet contains elements of incitement but does not meet all the criteria as the initial tweet was not specific in naming the locations and the nature of the action to be taken. This suggested that the user had knowledge of the legal criteria used to determine whether or not social media content would be judged as hate speech or incitement to violence.”

Real411 found that “the post contains one of the elements of Incitement to Violence but not the others”. The account, whose profile picture is the official logo of the PSAF movement, has used PSAF hashtags in 375 tweets. 190 of these were original content. 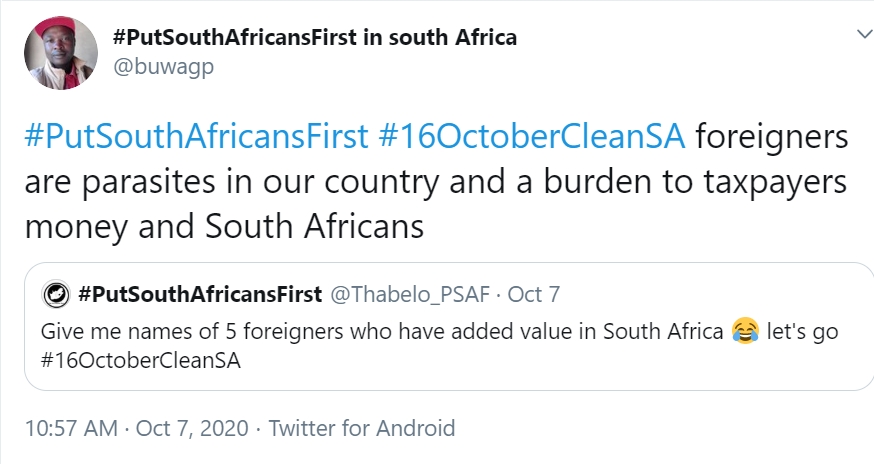 Real411 ruled that this tweet met “some of the criteria of both disinformation and hate speech but not all”. @buwagp is another prominent account in the PSAF network. In addition to an account name and profile information that contains the #PutSouthAfricansFirst hashtag, this account has posted more than 1,000 tweets containing PSAF hashtags. Of these, 230 were original posts. The account interacts exclusively with the PSAF narrative. This suggests that it exists only to promote the PSAF cause and does not represent a genuine user expressing their views. 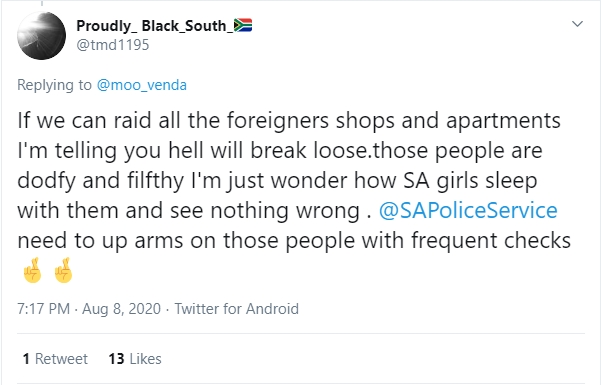 Real411 ruled that although this tweet met some of the requirements of hate speech, it called on the police to take action and therefore did not meet the incitement to harm requirement. This post was “extremely problematic” and fuelled “hatred and xenophobia”.

The account’s profile features nationalist rhetoric and has used the PSAF hashtags 71 times. The majority of these posts were retweets – only five were original posts. This suggests that the user is actively promoting the PSAF narrative but is not a central figure in the network.

Real411 found that the absence of harm incitement in this tweet disqualified meeting the legal criteria for hate speech. However, the content was “planting seeds for hate speech”.

This account is not central to the PSAF network but does occasionally post xenophobic remarks. In this tweet, the user expresses their support for the PSAF movement.

These findings indicate that not all followers of the #putsouthafricansfirst movement are inciting violence or spreading hate speech.

But those who are blatantly guilty of these offences are not being held to account by the movement’s leadership, and the long arm of the law is yet to bring them to book. DM