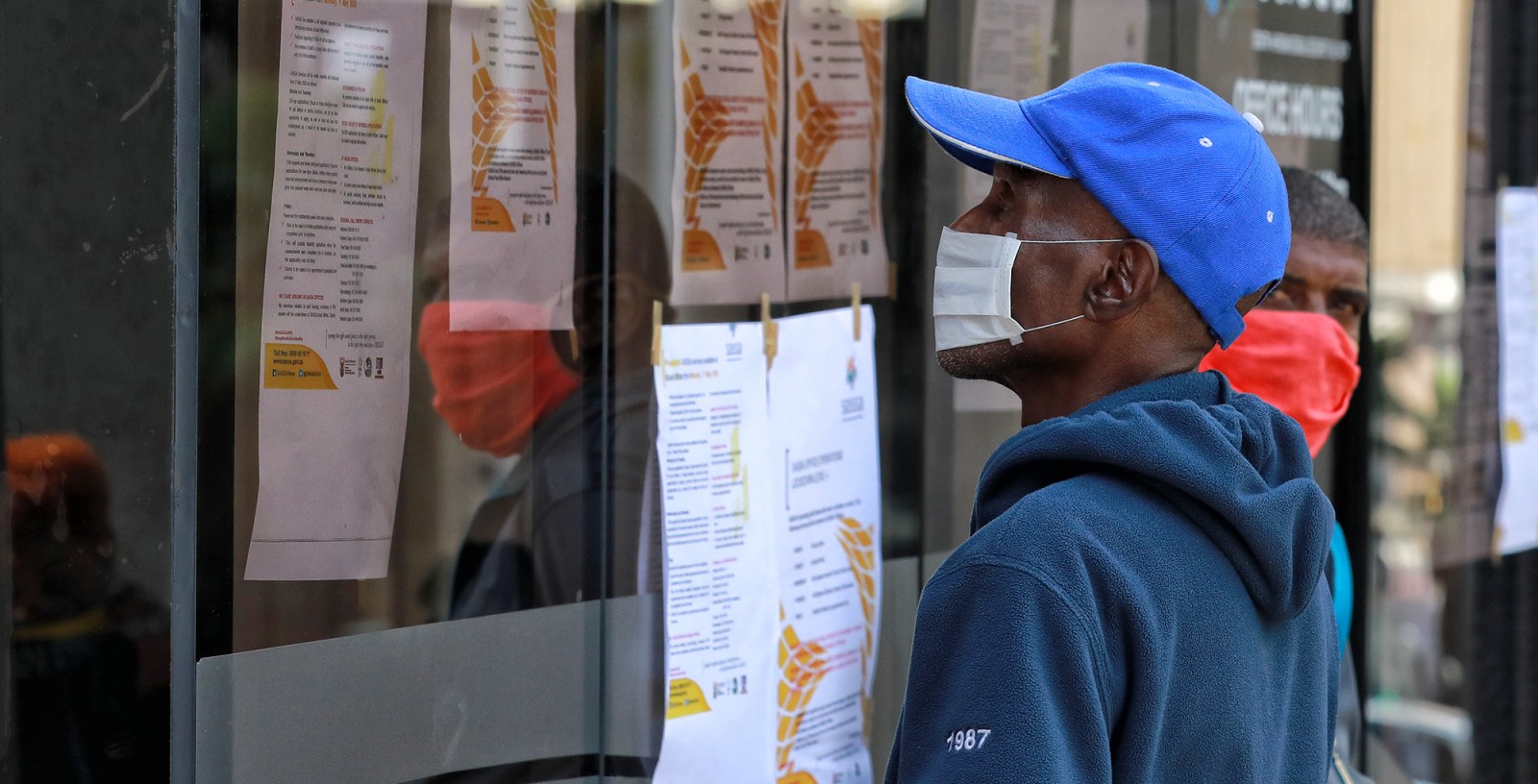 Social grantees have become a lucrative credit market, but borrowers enjoy little protection from unscrupulous lenders. It raises questions about legislative loopholes and problems with the social grant system itself.

The Christmas countdown is upon us with the now-usual temptation to overspend in the name of “goodwill and cheer”. It’s a debt trap for many and for social grant recipients who have to lend to spend, it’s outright exploitation.

Anthropology professor Deborah James of the London School of Economics (LSE) says the looming seasonal debt trap should be another opportunity to sound the alarm on a grant system that has got it wrong by putting the burden to provide in poor households on the shoulders of pensioners, children and the disabled.

Income shortfalls and realities of what it takes to survive means grantees are forced to borrow, and then often end up in unequal relationships with lenders. Lenders range from loan sharks and mashonisas to stokvels and formalised short-term and “pay-day” lenders. They all get away with charging inflated interest rates that are disproportionate to the income, loan amounts and risk of typical loans made by social-grant recipients.

“Because of how the grant pay-out system is set up, there is no risk for the lender. The borrower has no way of defaulting because the amount they owe will be automatically collected before they can withdraw any money from their accounts. It’s shooting fish in a barrel by cowboy capitalists who have made this practice go on for so long.

“With these unfair advantages they should not be allowed to lend at the rates they do.” says James, who previously lectured at Wits University.

She and co-authors David Nevis (a researcher from the University of the Western Cape) and Dr Erin Torkelson (a Mellon Post-Doctoral fellow of Western Cape) compiled the Black Sash report titled Social Grants: Challenging Reckless Lending in South Africa. It was funded by LSE and released in September.

The authors outline in the report how historical and structural inequalities have shaped access to fair credit for many, mainly black, people. This, together with loopholes for abuse in social grant pay-out systems and inadequate legislative protection in the lending market, has left grantees vulnerable.

And unsecured lending is big business – the National Credit Regulator (NCR) noted that the market in 2019 quadrupled in a decade to stand at R220-billion. NCR’s latest figures released at the beginning of October show that unsecured credit granted for the quarter ending in June 2020 decreased by R15.10-billion (59.64%) quarter-on-quarter and by R18.42-billion (64.32%) year-on-year.

The authors point out that the NCR allows the highest interest rates and fees for short-term unsecured “and presumably risky” loans. They warn, though, that overlooking that grant recipients make up a big portion of these borrowers is a damning blind spot.

It feeds the paradox: social grants paid to about 18 million South Africans are meant to support the most vulnerable, but turning grantees into an unprotected credit market keeps them pushed to the margins of indebtedness and poverty.

Torkelson explains: “When the National Credit Act was passed it was with the explicit intention to extend credit to black workers, mostly people who were historically excluded from accessing credit. Lenders were eager to make money off black workers in secure government jobs. But high unemployment in South Africa has limited the number of people creditors can lend to. Then in 2012-2018 the  SASSA/CPS grant system delivered secure, monthly payments from the government to social grant recipients through the formal banking system making grantees a new credit market.”

Typically, grantees borrow between R500 and R1,500 over one- to six-month repayment terms. These are small amounts that don’t blip on the NCR radar. But James says, the NCR should take notice and recognise these unique circumstances for grantees, as well as the power imbalance that exists and the reality of low levels of financial literacy and limited avenues for recourse for grantees.

“It can be very difficult to regulate lending in this market because the NCR is stretched and doesn’t have a strong presence in many rural communities where grant recipients are,” James says.

Unchecked, however, lenders quickly earn their reputation as loan sharks and mashonisas, charging above 50% interest – and sometimes even 100% interest – on loan amounts, the researchers found in their case studies.

The report calls for ways to short-circuit vicious debt traps. They recommend interventions like delinking child grants from the social grant credit market; applying levies on lenders; banning lenders from operating at grant collection points; banning all third-party lending (the likes of the Post Office or Net1) that SASSA contracts to facilitate payments; addressing aggressive marketing of products that target grantees; and pushing South African banks (which have among the highest bank charges in the world) to make fair-credit options available for the poor.

Many lenders claim to offer low-interest rates but build in initiation fees, registration fees and monthly service fees. The report also singles out lenders who pay loans in cash, but recoup payment through debit orders. They flag this practice as possible money laundering and it leaves grantees without an independent bank record to track what is being deducted for repayments.

“Debt in itself is not the problem, we have to destigmatise debt, which is a pragmatic solution for survival for many people. And even social grant recipients should be entitled to spend to enjoy Christmas, if they want. Where there is a problem is when lenders are allowed to profiteer off debt,” James says.

Cycles of debt arise with seasonal loans. The researchers found that a “sequencing of loans” – like a Christmas-time loan in December and another in June to buy winter clothes means there is “no cooling off period”; they are never debt free.

This toxic borrowing and debt pattern undermines the social welfare system’s intention to give security to society’s most vulnerable, James says.

The report calls for ways to short-circuit vicious debt traps. They recommend interventions like delinking child grants from the social grant credit market; applying levies on lenders; banning lenders from operating at grant collection points; banning all third-party lending (the likes of the Post Office or Net1) that SASSA contracts to facilitate payments; addressing aggressive marketing of products that target grantees; and pushing South African banks (which have among the highest bank charges in the world) to make fair-credit options available for the poor.

There’s also a need to increase the presence of better-trained NCR officials in rural areas as well as for the NCR with its partners to focus on school-based financial literacy. Black Sash intends updating its handbook for paralegals to bolster their advocacy work.

The authors say the social grant system needs structural change. It needs to be innovative and responsive to the realities in South Africa. They argue for raising the social grant amount; widening a social welfare net to include vulnerable adults between 18 and 59 and improving access to services so grantees are not spending grants or getting into debt to pay for decent healthcare and education that the state should provide.

Torkelson says: “The grant system itself sets grantees up to need debt to cover their household’s basic needs, emergencies and even upcoming Christmas expenses.”

Speaking at the Black Sash webinar launch of the report the NCR’s company secretary Lesiba Mashapa confirmed that unsecured loans have been on an upward spike for nearly 20 years because poor households are surviving on debt.

“It’s complex, but rather than trying to reverse or cancel these relations [that gave historically disadvantaged people credit] we should look at the cost of credit, the loan sizes and the terms,” he said.

Mashapa said over the past five years NCR regulations had worked to tighten assessment processes for granting loans, significantly dropping interest rates for unsecured credit and short-term loans and had set caps for lenders. Still, he acknowledged that many lenders openly flout the regulations.

“We must try to work towards aligning the National Credit Act with social security legislation. We can also increase collaboration with NGO partners because we are the only office in Gauteng to serve all nine provinces and that isn’t practically possible,” he said. DM/MC