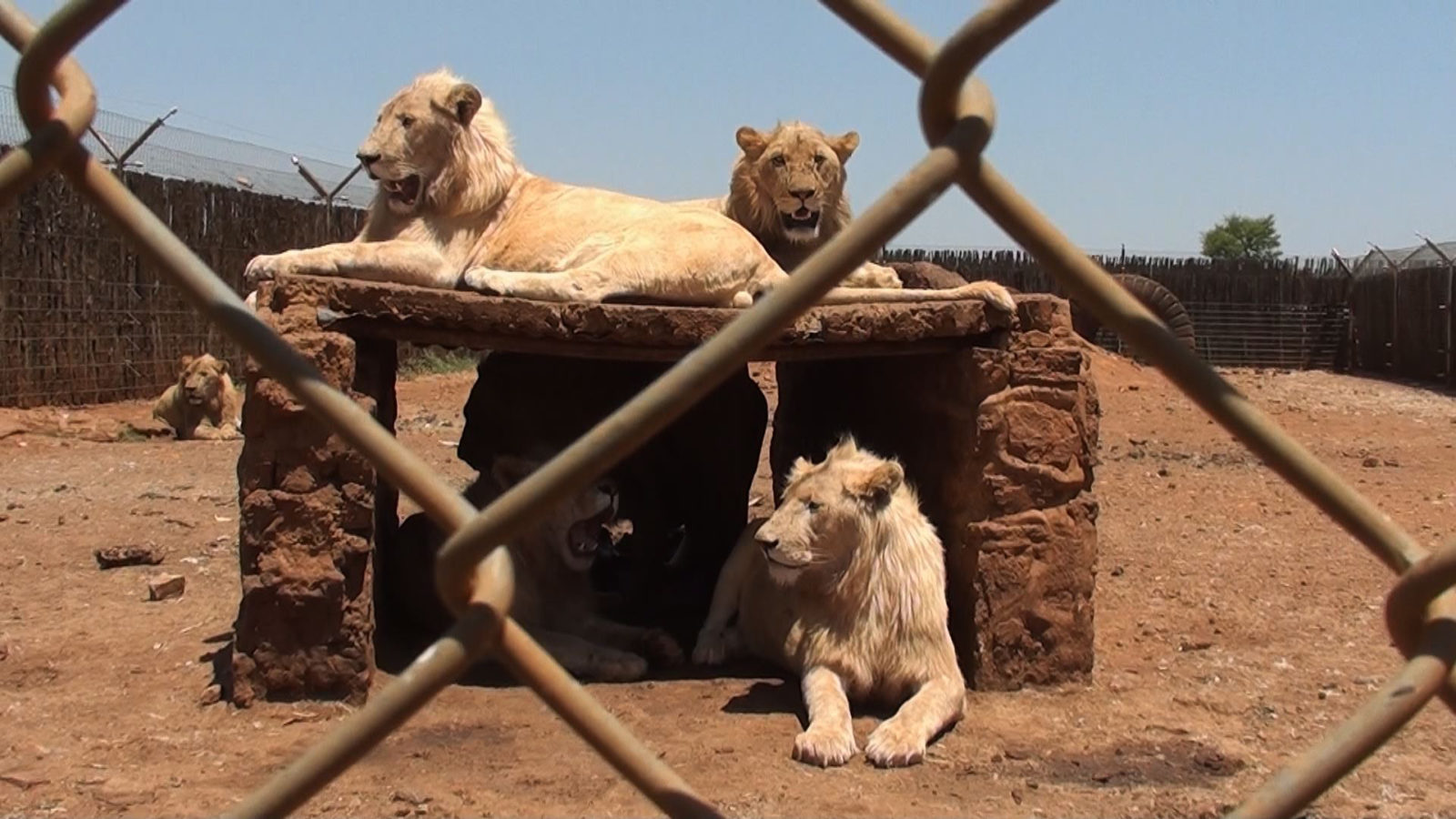 In a damning report, the committee described the industry as an “international pariah” and “a blemish on South Africa’s wildlife and tourism landscape” that “might have done irreparable damage” to the country globally. (Image: Blood Lions)

Will the government and its high-level panel finally accept the overwhelming evidence that captive lion breeding should be stopped?

A small number of people breeding lions in captivity is holding South Africa’s wildlife reputation hostage with strawman arguments about the supposed benefits of the industry when, in fact, both public and scientific debate has conclusively demonstrated that it has no conservation value, that it is damaging to the country and that it should be closed down.

That was the conclusion of the parliamentary portfolio committee on environmental affairs after a colloquium including a wide range of stakeholders as far back as 2018. In a damning report, the committee described the industry as an “international pariah” and “a blemish on South Africa’s wildlife and tourism landscape” that “might have done irreparable damage” to the country globally.

It further observed that, while currently lawful, the industry’s practices are seen as unethical, immoral and socially unacceptable with zero conservation value, as captive-bred lions cannot be released into the wild and have minimal economic value.

The committee resolved inter alia that “the Department of Environmental Affairs should as a matter of urgency initiate a policy and legislative review of captive breeding of lions for hunting and lion bone trade with a view to putting an end to this practice”. This resolution was subsequently adopted by the National Assembly.

Conservationists read the strongly worded resolution with hopeful optimism as it seemed to suggest the imminent demise of captive lion breeding.

What followed, however, was a distinct lack of action by the authorities, who have continued to distinguish themselves by their utter failure to adequately regulate the industry, let alone close it down.

How many breeders? How many lions?

Another 2018 parliamentary committee resolution instructed the then Department of Environmental Affairs “to conduct an audit of captive lion breeding facilities throughout the country” to ensure compliance with laws and regulations, but any official audits conducted so far are incomplete and inadequate.

Perhaps the best indicator of the government’s inability or unwillingness to control lion breeders is the fact that it can’t even seem to provide accurate figures on breeding facilities and the number of lions held in them.

In March 2019, the Department of Environment, Forestry and Fisheries indicated that 227 breeding facilities had been inspected, but offered no information on the number of lions involved. In August of the same year, the minister pegged the official numbers at 366 registered facilities with 7,979 lions, while by November, reported numbers were back down to 239 inspections and a total of 6,587 lions.

So how many lion breeding farms and how many captive-bred lions are there really in South Africa?

Independent estimates by conservation organisations LionAid, World Animal Protection and Blood Lions put the real figures at around 459 breeding facilities and between 10,000 and 12,000 captive-bred lions.

What is particularly shocking about these numbers is that the South African industry may be breeding more lions for profit from trophy hunting, live export and the sale of lion bones and skeletons to South-East Asian traditional medicine markets than remain alive in the wild on the entire continent, now estimated at fewer than 10,000.

In addition to its failure to make accurate industry figures available to the public, local conservation organisations such as the EMS Foundation have complained about government’s misrepresentation and lack of transparency, even when faced with legal requests for information under the Promotion of Access to Information Act.

There appear to be no mechanisms in place on a national level that would allow authorities to accurately verify the status of breeding farms or trace the whereabouts of captive-bred lions. It is unclear how the government expects to control the industry under these conditions.

What’s worse, when violations are uncovered, these are casually dismissed or ignored without legal consequences for the guilty parties. When government inspections of 227 breeding facilities revealed that 88 did not comply with permits or regulations, all permits were simply renewed.

In the face of mounting criticism, including international petitions to shut down the industry, Environment, Forestry and Fisheries Minister Barbara Creecy has established a high-level panel for the review of policies, legislation and practices on matters of elephant, lion, leopard and rhinoceros management, breeding, hunting, trade and handling under the National Environmental Management: Biodiversity Act. The composition and restrictive terms of reference have also drawn allegations of bias.

Why the industry needs to be stopped

There is no shortage of compelling reasons for bringing captive predator breeding to an end.

Disgraceful animal welfare conditions at breeding facilities have been exposed internationally and a forthcoming paper by the NSPCA documents high rates of injury and disease among captive lions at 95 breeding farms operating under conditions of general neglect, characterised by poor hygiene, malnutrition, food and water deprivation, insufficient veterinary care and inadequate shelters and enclosures.

The 2018 parliamentary committee report noted that revenues generated by the industry, “while lucrative for the owners” represent “only a tiny proportion” of the country’s income from tourism for which it is “not worth compromising our national brand reputation and position as a unique wildlife destination”.

These comments are confirmed by independent research.

A 2017 paper showed that the industry is predominantly owned by white middle-aged males and contributes only about R500-million to the national economy while sustaining fewer than 1,200 direct and indirect jobs. Compare this with employment figures of 1.5 million and a contribution to the 2017 GDP of R412.5-billion by tourism as a whole.

A new peer-reviewed study uses cost-benefit-analysis to estimate that the miserable international image of the lion breeding industry can be expected to cost the South African tourist sector a devastating R46-billion ($2.79-billion) over the next decade.

While a criminal neglect of animal welfare standards and crippling economic impacts ought to provide sufficient motivation for closing down the industry, the potential threat it poses to human health only adds to the urgent need for action, particularly in the middle of a global pandemic.

A new investigation has revealed the presence of no fewer than 63 pathogens in wild and captive lions, including ones that can be transmitted from lions to other animals and humans. These bacteria, viruses, parasites and fungi are associated with a total of 83 clinical symptoms and diseases.

To its credit, the 2018 parliamentary committee recognised the public health risk presented by captive lion breeding through such zoonotic diseases, including tuberculosis, well before Covid-19. It’s high time that its recommendation to put “an end to this practice” finally becomes official government policy.

Presented with all of this evidence and faced with worldwide condemnation of the industry, why is it that the government has yet to take decisive action against it?

There have been suggestions that lion breeders are threatening to demand compensation for loss of property and income if the government decides to close down their operations.

But this argument has been conclusively dismissed by the EMS Foundation in response to a question from the minister’s high-level panel. Noting that the right to property does not trump other regulations, laws and constitutional provisions, the organisation points out that the government has the legal right to take policy decisions against practices that are damaging to the country and violate its constitution without the need to pay compensation.

Indeed, the question should be framed from the opposite perspective: “will the industry compensate for the loss and potential economic and reputational harm caused to the country by its activity”?

And what is to happen to the thousands of captive-bred animals if the government were to shut down the industry? Humane Society International notes that, while NGOs could assist in repurposing existing breeding facilities and developing welfare plans for the cats, the onus to find and fund a solution is on the industry, which, along with government, chose to ignore repeated warnings about the legal, financial, reputational and other risks for over 10 years, and instead decided to expand its operations in the pursuit of profits.

It remains to be seen whether the SA government and it’s high-level panel finally accepts the weight of evidence against captive lion breeding and do the right thing to save both the country’s conservation reputation and those thousands of lions condemned to a life of misery. DM