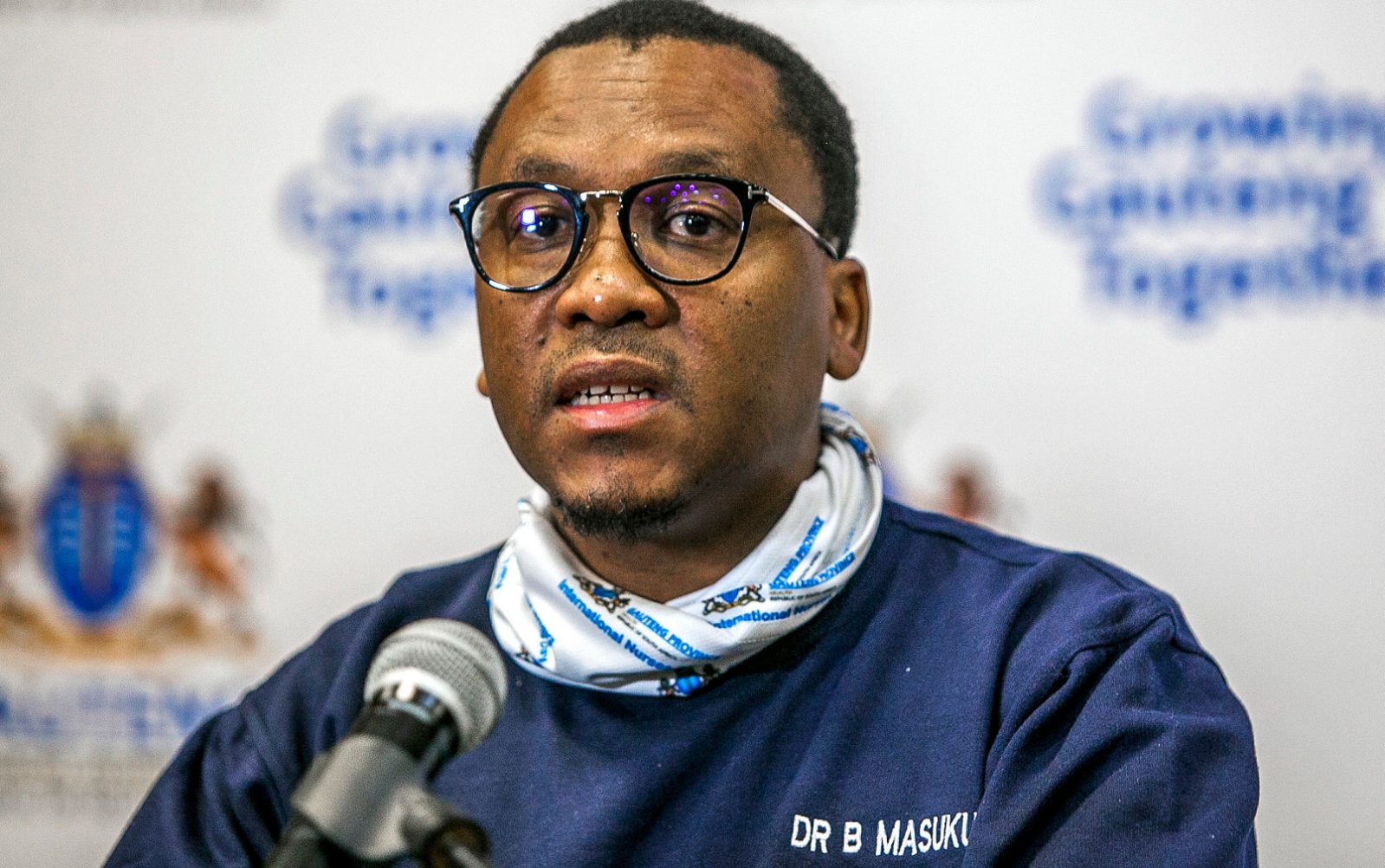 Gauteng health MEC Bandile Masuku presides over the personal protective equipment donations from the United Nations Development Programme (UNDP). The UNDP donation to the health department is a critical intervention in the fight against the Covid-19 pandemic. (Photo by Gallo Images/Sharon Seretlo)

Gauteng premier David Makhura has dismissed health MEC Bandile Masuku after the Special Investigating Unit found he had failed to act on controversial personal protective equipment contracts. But if Masuku is cleared of corruption allegations that are still under investigation, Makhura will 'gladly' reappoint him.

Gauteng health MEC Bandile Masuku has been sacked after the Special Investigating Unit (SIU) found he failed to fulfil his oversight role with regard to controversial personal protective equipment (PPE) contracts during the province’s Covid-19 response, Premier David Makhura announced on Friday.

“The SIU has found that the health MEC Dr Bandile Masuku has failed to execute his functions in compliance with the Constitution and the Public Finance Management Act, the PFMA,” said Makhura during a media briefing at Chris Hani Baragwanath Hospital.

Thandisizwe Diko cancelled the contract due to perceptions of a conflict of interest, but he is alleged to still have received payments to provide PPE through what’s been reported as a front company, Ledla Structural Development.

“I have decided as the premier of the province to discharge Dr Bandile Masuku from his responsibilities as the Gauteng MEC for health,” said Makhura.

According to Business Day, the SIU found that department officials had claimed the Gauteng health department CFO, Kabelo Lehloenya, was approving PPE contracts in contravention of the law.

Lehloenya resigned while the SIU was investigating the contracts and Pino has been suspended.

Business Day reported the SIU found three contracts under investigation led to the loss of over R45-million in fruitless and wasteful expenditure.

The SIU has not yet made any findings of whether Masuku participated in corruption or collusion.

Jacob Mamabolo has been acting in the position of health MEC and Makhura said he will not appoint another health MEC until the SIU completes its investigation into Masuku.

“I do want to know and get this completed before I appoint the MEC for health in Gauteng because I want to say, should MEC Masuku be cleared, I will gladly reappoint him for MEC of health,” said the premier.

Makhura was questioned on how he could consider reappointing Masuku if the SIU’s findings justified his removal. The premier said failures of administrative oversight are not comparable to corruption, and there is international precedent for reappointing officials who have been cleared of criminal allegations.

Makhura said Masuku had improved the provincial health department since he was appointed in May 2019. He called his leadership during the Covid-19 crisis “indisputable”.

Masuku, who has denied the allegations against him, commissioned his own investigation into his role in awarding the controversial PPE contracts.

O’Sullivan told radio station 702 he had investigated the issue for two months, studying over 2,000 pages of evidence and conducting multiple interviews, “and we’re satisfied that, in fact, MEC Dr Masuku has the best interests of the people at heart and he’s not been involved in any wrongdoing whatsoever”.

He claimed the only knowledge Masuku could have had of the controversial PPE contracts was an emailed list of suppliers the health department sent to the MEC and the Motsepe Foundation, which wanted to help provide PPE. According to O’Sullivan, Masuku never opened the email.

“We’re now satisfied that Dr Masuku hasn’t been involved in any wrongdoing and nor has his wife,” said O’Sullivan.

Makhura said he is aware of O’Sullivan’s investigation, “but I work on reports that are commissioned formally by state institutions”.

Masuku’s wife, Loyiso Masuku, is Johannesburg’s Member of the Mayoral Committee for Group Corporate and Shared Services. She, along with Khusela Diko, took leave while the SIU conducted its investigation.

In September, the Gauteng ANC provincial executive committee (PEC) rejected a report from the party’s provincial integrity committee, which reportedly suggested that Masuku, a PEC member, voluntarily step down from his position.

The PEC found there were inconsistencies in the integrity commission’s report and extended the implicated officials’ leave of absence while awaiting the findings of the SIU’s investigation. DM