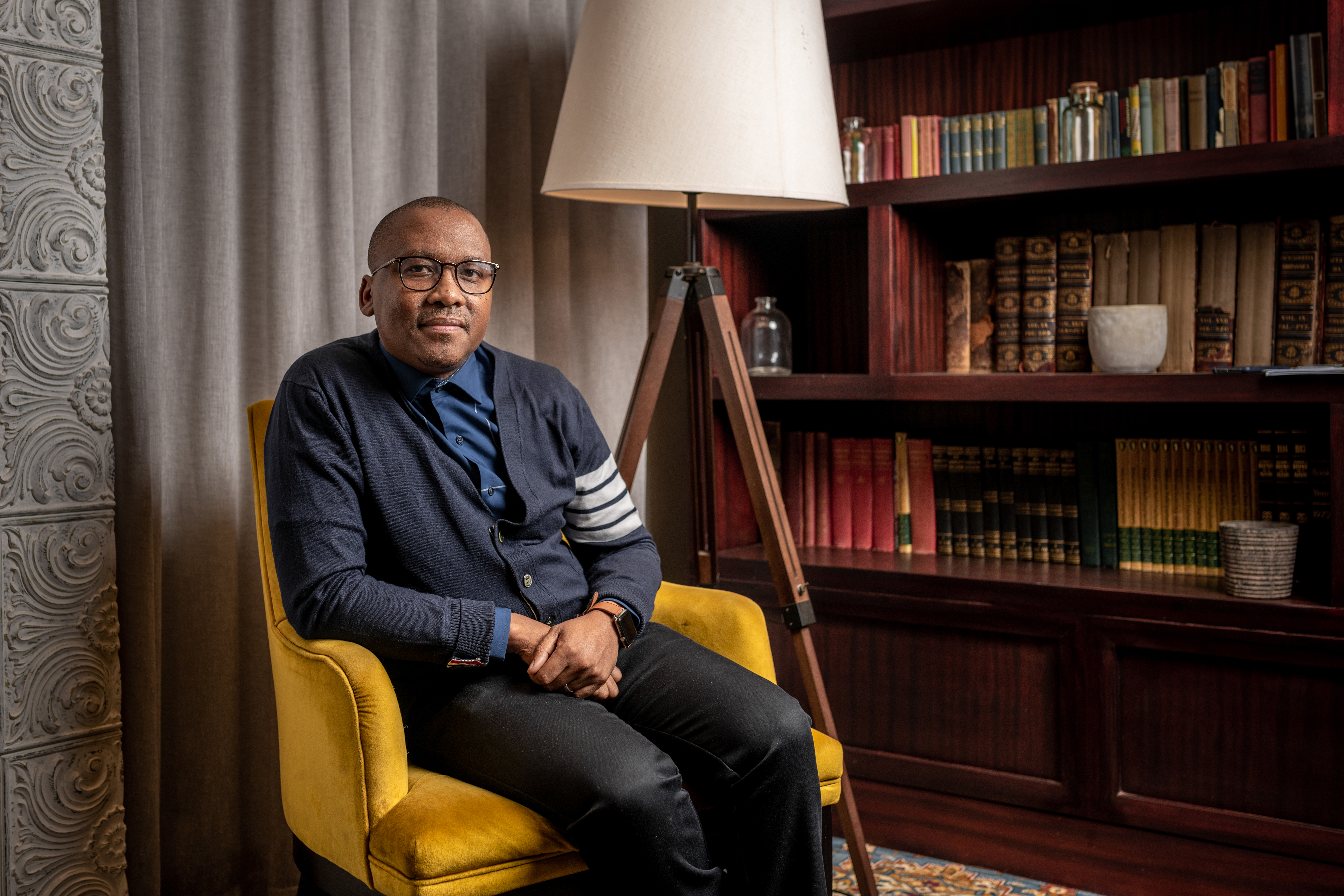 Dr Bandile Masuku was recently appointed as MEC for Health in Gauteng, South Africa’s most populous province. Spotlight asked him about the task ahead.

New Gauteng MEC for Health Dr Bandile Masuku has had a long day, but it does not show. His voice is slow and thoughtful; his attire immaculate: shiny shoes and a navy cardigan, buttoned all the way. Behind spectacles his eyes are bright. “They’re Tom Ford. Yes, I’ve been colonised,” he says, laughing.

Masuku’s new job is no laughing matter — of this he is well aware.

On May 28 he was sworn in as Gauteng’s new head of health, inheriting a department described by Premier David Makhura as “on its knees”. This despite receiving the biggest portion — R50-billion — of the provincial budget.

“It’s a daunting task,” says Masuku. “You know, one of those key moments in your life.”

We’re inside a boardroom at the African Pride Irene Country Lodge in Centurion. Outside, an ANC caucus is under way.

Earlier today Masuku joined Makhura on a surprise visit to Mamelodi Hospital, in the Mamelodi township northeast of Pretoria. A video showing 76-year-old patient Martha Marais handcuffed to a bench at the hospital went viral on social media in June. The hospital has been under scrutiny since, with the South African Human Rights Commission stepping in.

“People are saying Mamelodi is my fire baptism, and in a sense it is,” Masuku says.

“It combines all the problems we face in the department: staff shortages, bad staff attitudes, inadequate infrastructure, no appropriate equipment, cleanliness of hospitals.”

While speaking, he ticks off the challenges on his fingers.

“I mean restraining in a medical ward, this is not something strange. But you cannot restrain a patient by cuffing her hand to a bench. No, we certainly don’t use handcuffs. Appropriate equipment and medicine is needed. A patient should be restrained on a stretcher or on a bed.”

Masuku says — as a starting point — that staff morale will be addressed through a human resources programme to be rolled out at health facilities across Gauteng.

“You know, bad staff attitudes don’t just happen because people are badly raised. So there would be factors that make them edgy; irritable, angry and fatigued. We have enlisted the help of a team who deal with staff morale, who is designing an intervention programme. They call it ‘employee value proposition’. This will be put in place for all our administrators, for all our clinicians. The thing is we also need them to buy into it, to add onto it, so that it’s not just something that comes from the top. I think uplifting staff morale will change staff attitudes,” he says.

“We also have to improve training, you know. People need to be trained in customer care. And beside empathy and care, they must be trained in handling difficult situations; handling angry or violent or hostile patients.”

Filing is another pressing concern.

“The issue of the filing system came up fairly sharply too. Many patient files have been lost. We really need to go electronic, digital. That will save a lot of time and a lot of space.”

Speaking of the Mamelodi incident, Masuku’s words carry the gravity of someone who has worked at the coalface himself. Indeed, he has practised as a doctor at hospitals around Gauteng: Charlotte Maxeke Academic Hospital, Chris Hani Baragwanath Hospital and Pholosong Hospital. His speciality is obstetrics and gynaecology. Right before his appointment, Masuku headed the obstetrics and gynaecology unit at Thelle Mohoerane Regional Hospital, in Vosloorus.

Masuku was born at Chris Hani Baragwanath Hospital in Soweto 43 years ago. Then it was known as Baragwanath.

“So I ended up working in the very maternity ward where I was born. I’ve come full circle,” he says.

In Soweto, he grew up in a family of health workers. One of three siblings, Masuku was the middle child between two sisters.

“I’ve always been surrounded by health workers,” he says. “Two of my aunts were nurses and my paternal grandmother, well, she was one of the first nurses in Soweto. Actually, she was in a class with Nelson Mandela. So it just came from there; their ability to have empathy, their ability to care and to do things for others, all of that played a great role.”

“I didn’t even do standard four,” he says. “Yeah, I was promoted. I got almost 100% in standard three, so went straight ahead to standard five.”

At Sekano-Ntoane Secondary School, he cut his political teeth at the Congress of South African Students (Cosas). This saw him detained, disturbing his preparations for matric in 1991. Not wanting to jeopardise his career, he repeated the year, matriculating again in 1992.

“Because of my political activism, I repeated matric,” he says. “My first matric mark was adequate, but not good enough for university and medical school. The second time went much better; I got an A for English, with my maths and physics marks much improved.”

In 1994, he enrolled for a BSc at Sefako Makgatho Health Sciences University in Pretoria, then known as the Medical University of South Africa (Medunsa); and in 1998 for a degree in medicine, completed in 2004. Again he repeated a year — 1999 — the year he served as president of the university’s Student Representative Council (SRC).

“When I was SRC president,” he says, “I didn’t attend any classes, even though I was expected to do so. While I wanted to be a doctor, I also had to fight for student rights and student grievances.”

Speaking to Masuku, it becomes clear that his ambition to become a doctor and his predilection to lead politically have always existed side-by-side, often clashing.

In 2002 he was elected to the national executive committee of the South African Students Congress (SASCO); and in 2013 he became national spokesperson for the ANC Youth League.

What drew him to obstetrics and gynaecology? Was it because he grew up in a family of women? He laughs.

“Yes, it was a natural choice,” he says. “My first time in a hospital as a medical student was in a maternity ward, I was in my third year. Then, when I finished my medical degree as an intern, my first block was in obstetrics, at Charlotte Maxeke. I fell in love with it — it felt like something I would love to do for the rest of my life. It combines being a doctor with a little bit of surgery. There is also the big satisfaction of having two patients in one — literally.”

On his own home front, Masuku has three sons. The youngest, born in the week of his inauguration, is but a month old. “No I am not getting much sleep,” he says, smiling.

His wife of four years, Loyiso, is a local ANC councillor. The family lives in Alberton.

On his iPad, Masuku keeps mostly political books. He is a follower of Argentine revolutionary and physician, Che Guavara.

“Most of my books and collections about Guavara are his thoughts about medicine,” he says.

Then there are the icons: Nelson Mandela, Oliver Tambo, Walter Sisulu and Steve Biko. His favourite book is Let My People Go by Albert Luthuli.

“This is Albert Luthuli’s biography. Actually, I think it’s one of the first books I really understood because I wrote an essay about it in my matric exam. The question was: ‘Tell us about a book you would advise all young people to read?’ It summarises the history of our country, the history of our struggle and the basic principles surrounding it.”

Masuku likes to unwind watching soccer, especially at the stadium; with occasional bouts of rugby, cricket, boxing and Formula One support thrown in.

“I used to play soccer,” he says. “At varsity, I even formed a team, it’s still there. But I’ve stopped, I felt that if I get injured now… My daily life really is a bit hectic, especially now.”

On average, Masuku’s days start early: he first reads on his iPad, then from six o’clock, he starts preparing for work.

“It all depends on where I am supposed to be that day,” he says. “I don’t go to the office much. I’ve been visiting a lot of facilities, doing unannounced site visits. For example, this morning I went with the premier to Mamelodi Hospital. He decided late last night that he needed to go over there himself.”

On the Life Esidimeni catastrophe, which saw at least 144 Gauteng psychiatric patients die after being transferred to inadequate facilities, Masuku says: “This is a very big tragedy for our country. We need to see this tragedy not repeating itself.

“Esidimeni gives us lessons,” he adds. “In health, when errors happen, these adverse effects give us an opportunity to do things differently. When you understand the problem, it’s the first step to coming out with the right solution.”

According to Gauteng’s shadow health MEC Jack Bloom, of the DA, 15 Esidimeni patients were still unaccounted for in May.

These are big challenges. In a show of humility, Masuku admits he will need help in his new role.

“I don’t think with my own wisdom alone I’ll be able to do it,” he says. “I will need a lot of help. I’m going to rely on people who also have experience in the field and passion. Take for example the Treatment Action Campaign (TAC). These are people, ordinary people, who have a passion for how quality health care could be. And it’s not like they have all the answers, but they work with the people, they develop solutions with the people. They do not intend to solve everything at once, but they understand that there is a bit they can do. So us in government, we can use the strength of the TAC in terms of mobilising communities.”

Masuku says he has invited Bloom for tea to discuss the portfolio. He has also approached the EFF and IFP for input.

“What I’ve decided in my head is that I’ll give this my best shot,” he says. “And I’m hoping that my leadership style, my ability to analyse the problem in a proper way will lead us toward something. I have a long history of board experience too, which also gives you a sense of governance.”

It may well be that Masuku’s new position as health MEC is the ideal culmination of his attributes and experience thus far, both as a medical professional and as a leader.

He reiterates that Mamelodi Hospital will serve as the benchmark of his tenure. In fact, he insists that his progress at Mamelodi be assessed at premier Makhura’s State of the Province Address in February next year.

Fixing the public healthcare system in South Africa’s most populous province might well be one of the toughest jobs in the country. For now, Masuku’s frankness and his seriousness about the task at hand inspires cautious optimism. He might well be just the right person for the job. Time will tell. DM