Police move to quell anger over Senekal farmer’s murder, but political interests threaten to add fuel to the fire 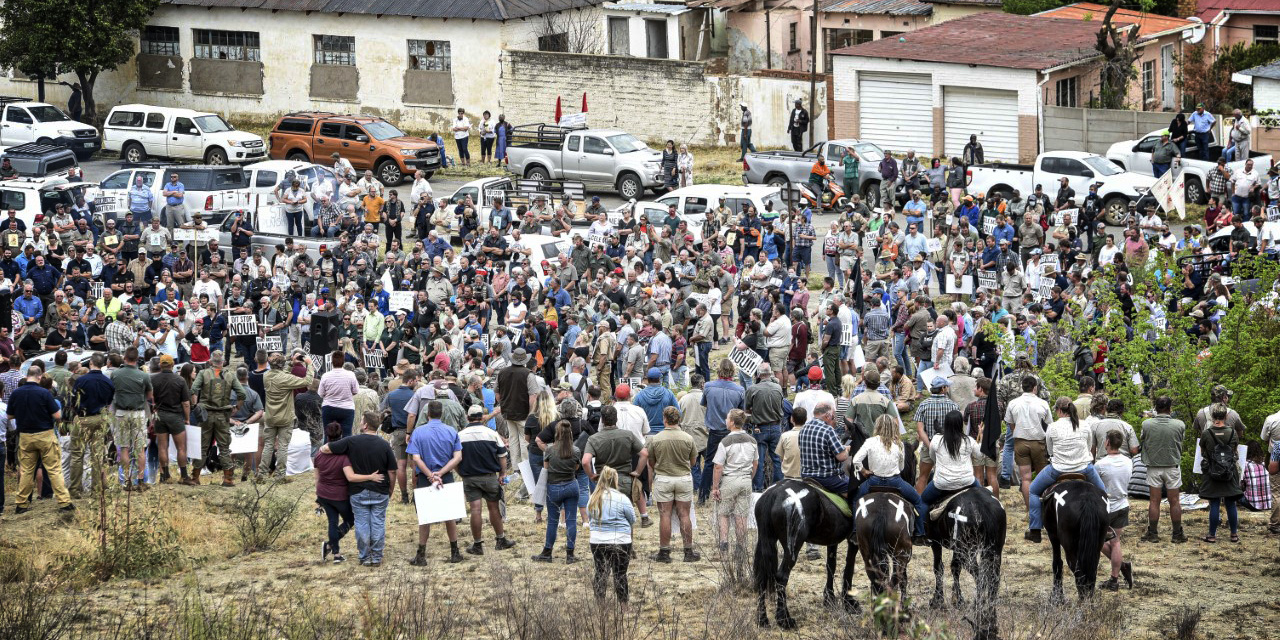 Thousands of people gather in Senekal to protest against farm murders after the killers of 21-year-old farm manager Brendin Horner appeared in court. It is reported that Horner was found dead by the police. The young farmer was tied with a rope to a pole at an open space situated at De Rots. (Photo: Gallo Images/Volksblad/Mlungisi Louw)

Stakeholders appear to agree they have a plan to combat farm attacks, but further clashes in the Free State town of Senekal could derail the strategy, which relies on trust and cooperation.

In a 2001 report, Human Rights Watch wrote, “Violent crime on South Africa’s farms has recently become a high-profile media and political issue. Some of this attention has focused on assaults on farm residents by white farm owners, but the heightened interest has been driven mostly by a rise in violent crime against white farm owners.”

Almost 20 years later, attacks on farms and smallholdings – and the police response – have continued to be an emotive and racially charged issue that threatens to spiral into further violence as farming communities demand action while others criticise farmers’ actions.

For decades, farmers, particularly white farmers and their lobby groups, have claimed that the police have failed to act on violent attacks in rural areas.

That anger was evident as farming communities protested at the Senekal Magistrates’ Court on Tuesday, where two men appeared for the brutal murder of 22-year-old farm manager Brendin Horner. Demonstrators stormed the courthouse where a gunshot was fired (it’s unclear whether by the police or protesters) and a police vehicle was set on fire.

A day earlier, however, SAPS National Commissioner Khehla Sitole met with AgriSA, the commercial farmers’ union TLU SA and AfriForum in Pretoria, where they appeared to agree on a plan to curb farm attacks.

The Human Rights Watch report, titled Unequal Protection: The State Response to Violent Crime on South African Farms, found that the state had failed to protect residents of commercial farming areas and its safety plan – which used commando units, made up of army reservists, as well as police reservists and security groups to help combat crime – left black farmworkers particularly vulnerable, with the commandos committing serious abuses.

In 2003, then president Thabo Mbeki announced the disbandment of the commando units.

Dr Johan Burger, a consultant at the Institute for Security Studies, said the commandos were the main force behind the rural safety plan at the time and the disbandment brought an end to the police commitment to rural safety.

“It destroyed whatever system was in place,” said Burger.

“It remained like this, in a way, until 2010-11 when the new strategy was developed, but it still lacked the political support that the police needed in order for the police to commit themselves to implement the strategy and access the resources they needed.”

Without political will, those resources were never forthcoming, said Burger.

The revised Rural Safety Strategy, released in 2019, aims to address capacity problems by recruiting police reservists and having the SAPS collaborate closely with community policing forums, and neighbourhood and farm protection groups.

At the meeting with AgriSA, the TLU SA and AfriForum this week, stakeholders endorsed the plan and the SAPS committed to establishing joint rural safety command centres to oversee the integration of police and community groups’ resources.

“Fighting crimes, including farm attacks, in rural communities through visibility, the meeting further agreed that it is imperative to customise community policing through the establishment of community-based mounted units, the royal reserve police service as part of the traditional policing concept as well as the tourism reservists,” said Sitole.

“There was also emphasis placed on addressing within a task team, the practical challenges with the recruitment and utilisation of reservists to make it more accessible for the farming community.”

SAPS spokesperson Brigadier Vish Naidoo said plans to implement the strategy were still being finalised. Asked whether incorporating local farming security teams, which have been accused of violently apprehending suspects on farms, could lead to further violence, Naidoo said that by working together, the police and various groups would hold each other accountable.

AgriSA rural safety committee chairperson Tommie Esterhuyse told Daily Maverick that he was confident in Sitole’s commitment to combat farm attacks and that the new strategy, although its implementation has been limited by the coronavirus pandemic, will lead to positive change.

Freedom Front Plus leader Pieter Groenewald has said the “plan looks good on paper, but it will mean nothing if it is not executed well”.

“I am encouraged by the most recent developments, especially since the beginning of this year,” said Burger.

He said President Cyril Ramaphosa, Sitole and Police Minister Bheki Cele this year had all acknowledged the seriousness of farm murders. In July, Sitole said rural safety would be a priority in the police’s next budget.

EFF leader Julius Malema has called on supporters to attend the next court hearing in Senekal when Sekwetje Mahlamba and Sekola Matlaletsa, charged with Horner’s murder, appear on 16 October “in defence of our democracy and property”.

Ramaphosa and Cele have been criticised by political parties and farming groups for allegedly dismissing the issue of farm murders.

In 2018, the president told US President Donald Trump there are no killings of white farmers or land grabs in South Africa.

“The reason emotions run high when it comes to farm murders and attacks is directly related to the fact that President Cyril Ramaphosa denied that farmers are being murdered in South Africa in New York in 2018,” claimed the Freedom Front Plus in a statement after this week’s protests in Senekal.

Cele has been accused of telling farmers they should not complain when they get hurt, but a News24 investigation found there was no evidence he made the comments.

The DA’s Dianne Kohler Barnard repeated the claim this week while welcoming the meeting between police and farming groups.

“It is certainly a welcome change that the rural safety of farmers, farmworkers and community members is being taken seriously by senior members of the SAPS instead of them being told that they should fend for themselves, as the Minister of Police, Bheki Cele, told farmers in Normandien in KwaZulu-Natal,” she said.

While various groups have signed on to the policing plan, they’ve also been clear about their distrust in the government. That distrust, and unfounded claims from some white farmers that the government is directly or indirectly allowing the crimes to continue, has largely defined the issue of farm attacks in recent years.

In a statement issued on Tuesday, after the protests in Senekal, which have led to the arrest of at least one demonstrator, Free State TLU SA chairperson Bertus van der Westhuizen said the union does not support vandalism.

“But the behaviour of the supporters reflects the feeling of farmers at ground level. The irreconcilable attitude and remarks of the Minister of Police, Bheki Cele, against farmers add to this feeling. We are fed up and will no longer be targets,” he added.

Ernst Roets, head of policy at Afrikaner interest group AfriForum, said, “The fury that the people expressed here today is the consequence of the cruelty of a problem that simply persists, coupled with the government’s lackadaisical attitude towards farm murders.”

EFF leader Julius Malema has called on supporters to attend the next court hearing in Senekal when Sekwetje Mahlamba and Sekola Matlaletsa, charged with Horner’s murder, appear on 16 October “in defence of our democracy and property”.

Further clashes at court next week could derail the implementation of the revised Rural Safety Strategy, which relies on trust and cooperation. DM