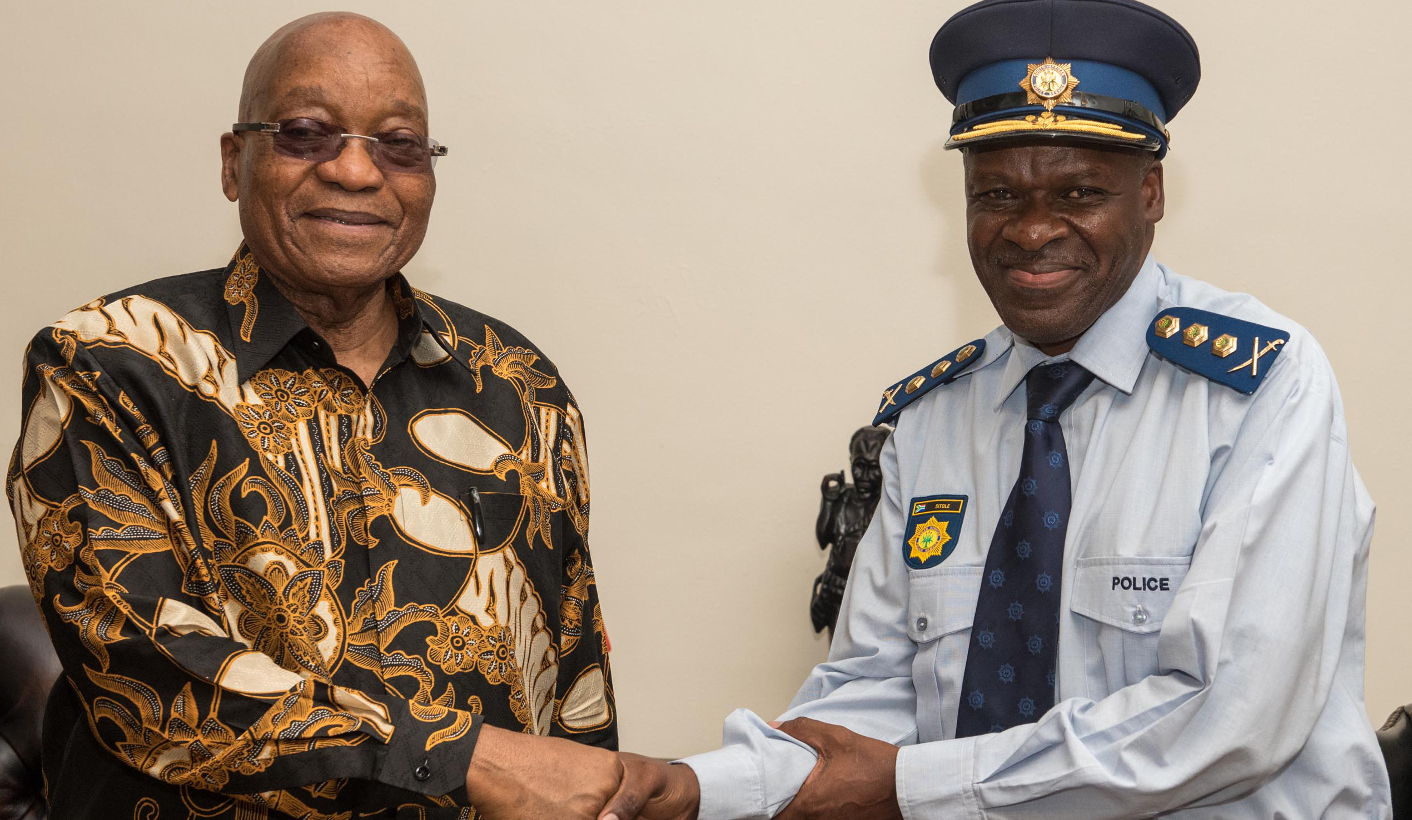 President Jacob Zuma on Wednesday made a surprise announcement, appointing Lieutenant-General Khehla Sitole as national police commissioner. Little is known about the top cop who has avoided the limelight, but the appointment of a career officer has been welcomed. By GREG NICOLSON.

Newly appointed Police Commissioner Khehla John Sitole is career police officer who is said to be a man of integrity who could restore stability to the top ranks of the SAPS. He has largely avoided public scandal and even while occupying top police positions remained in the background, leaving some unsure of what to make of his appointment.

Zuma emphasised Sitole’s operational and managerial roles since he joined the police in 1986. “His extensive experience in the police service will assist him to execute this critical task of making South Africans and everyone in the country safer and to feel safer,” said the president.

Sitole has not frequently appeared in the news and when he has it has related to routine matters – successful operations, comments on high-profile cases and efforts to reach out to civil society and communities. When he was moved from the Free State to the national office by his ally Phiyega, both the Policing, Prisons and Civil Rights Union (Popcru) and the South African Police Union (Sapu) said they were sad to see him leave.

Portfolio Committee on Policing chairperson Francois Beukman welcomed the appointment of a career policeman. He has interacted with Sitole in Parliament. “In our interactions with him he’s a straightforward and down to earth person,” he said. “I think we’ve got to expect he will be able to deal with the issues in the policing environment.”

A number of commentators said they had heard Sitole was capable and had integrity, hadn’t been tainted by scandal, but they knew too little about him to comment on the record.

Independent policing expert Johan Burger said Sitole has substantial experience. “He was one of the less prominent of the lieutenant-generals in the police in the sense that he never drew any negative attention from what we know and from what some senior people tell me.”

Looking at his history, Burger said, “It’s obvious he has practical policing experience as well as managerial experience.” He said there is always suspicion over Zuma’s appointments “but in this instance it seems like it’s a firmly good choice”.

Burger said Sitole’s anonymity made him a surprising candidate, although he had been mentioned as a possible replacement to Phiyega in 2015. Acting police boss Mothiba could have been given the top job to help him take back some of the responsibility he seems to have given to Police Minister Fikile Mbalula. Deputy Commissioner Lieutenant-General Gary Kruser had the experience and political history, he said. Lieutenant-General Nhlanhla Mkhwanazi showed he would not bow to political pressure during his brief acting stint as commissioner from 2011.

Democratic Alliance (DA) shadow minister of policing Zakhele Mbhele said Sitole was not the best candidate for the job and could buckle if Zuma applied political pressure. “While we acknowledge that General Sitole is an improvement from his predecessor because he is an experienced and senior career officer, we are not convinced that he has the backbone to resist political pressure on the SAPS,” he said in a statement.

Sitole was head of the police’s protection and security services when Nkosazana Dlamini Zuma was granted SAPS VIP protection after she returned to South Africa when her term as African Union Commission chairperson ended. Questioned in Parliament, Sitole was only able to offer vague explanations for the deviation from protocol.

Mbhele said the DA will ask Zuma in Parliament to reveal the names of other short-listed candidates for the national police commissioner job and their qualifications to assess whether the best candidate got the job.

Burger and Beukman were clear on what Sitole should prioritise after his immediate appointment. Burger said he needs to restore public confidence in the police and create stability after the restructuring of the top brass multiple times in recent years. He should take a strong position on corruption and lead a disciplinary hearing against suspended crime intelligence boss Richard Mdluli, who has been on paid suspension for six years as he faces criminal charges.

Beukman said Sitole must earn the respect of his peers in the service and implement the recommendations outlined in the National Development Plan (NDP). “How do we ensure that SAPS moves forward as a professional institution,” he said was the key question.

Contacted shortly after the announcement, Popcru General Secretary Nkosinathi Theledi said he had not expected the appointment. Later, the union’s spokesperson Richard Mamabolo said the union’s position on Sitole would depend on his vision. “We think it would be important that structures within the SAPS, both nationally and provincially, are formalised, since there is no formal structure. We need to deal away with the bloating of managerial personnel at the HQ and provinces, with more support on the ground.”

In July, Corruption Watch and the Institute of Security Studies launched a campaign aiming to ensure a transparent appointment process of the heads of SAPS and the Hawks, saying the public should be consulted as per recommendations in the NDP. That didn’t happen, but perhaps the president was influenced by the growing calls to appoint a commissioner with policing experience.

In a statement, Minister Mbalula congratulated Sitole on his appointment. He will host a briefing in Tshwane on Thursday to introduce the national police commissioner. DM